After Stonewall: 50 Years of Love and Activism 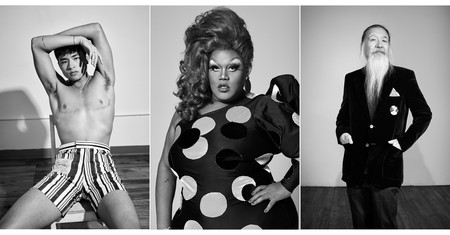 A landmark exhibition by photographer Collier Schorr celebrates LGBTQ radicals past and present at the influential Alice Austen House museum, to mark the anniversary of the Stonewall Riots.

Stonewall at 50 is an emotive exhibition of portraits by Collier Schorr depicting a diverse cast of LGBTQ radicals – with the venue, Alice Austen House, forming an intrinsic part of the story.

Located on Staten Island in New York City, this house was the home of pioneering Victorian photographer Alice Austen and her muse Gertrude Tate for 30 years. Today, like the Stonewall Inn, the house has been designated a national site of lesbian, gay, bisexual, transgender and queer history. Schorr’s collection interacts with this history, depicting 15 figures at the bleeding edge of the LGBTQ discussion in expressive black-and-white portraits, which distil the energy, power and humanity of the subjects. Figures such as 1970s lesbian activist Karla Jay and 20-year-old deaf, genderqueer Chella Man bridge generational divides, while Schorr’s presence stitches together the stories of Austen and Stonewall. “Austen was a pioneer in her field of photography and defied Victorian conventions for women,” says Victoria Munro, the executive director of Alice Austen House.

“All the participants in this exhibition embody Austen’s daring spirit, and they are unified by the lens of Collier Schorr.”

The collaborative project came about under the stewardship of Munro, who worked with the Google-supported Stonewall Forever project, which aims to “find, preserve and share the untold stories of the Stonewall Riots of 1969 and the early years of the LGBTQ rights movement”. Munro also consulted with the LGBT Community Center and the National Park Service’s LGBTQ Oral Histories project to compile a suitable list of subjects.

When it came to execution, Schorr, who has amassed a significant body of work exploring gender and identity, was the natural choice. “They wanted to have a lesbian photographer shoot activists to mark the anniversary of Stonewall,” she says. “I agreed to it because I feel my work has been so influenced by gender representation and gay identity and this was a way of bringing it closer to the source, making something with and for my community.”

Here, we explore the portraits of the activists whose work has shaped the LGBTQ community in the United States since the Stonewall Riots, as well as Alice Austen House and Staten Island.

Stonewall at 50 is exhibited at Alice Austen House until September 2019. 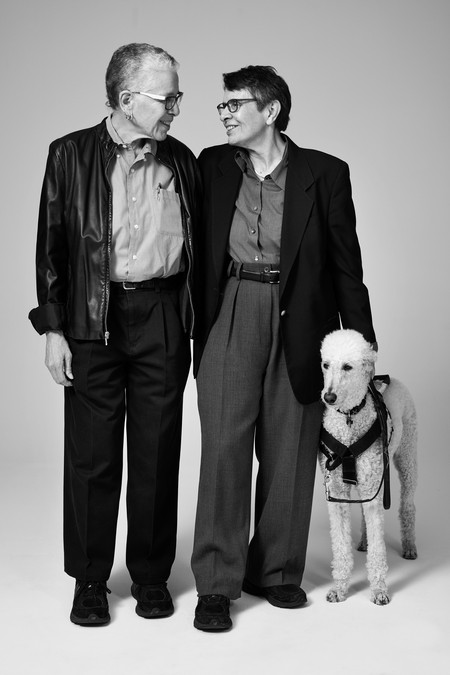 Karla Jay (right), pictured here with her partner Karen F Kerner, is a distinguished professor emerita at Pace University, where she taught English and directed the women’s and gender studies programme for more than 30 years. She was one of the early members of the Gay Liberation Front, founded in the wake of the Stonewall Riots, and was also a member of the pioneering Lavender Menace group. 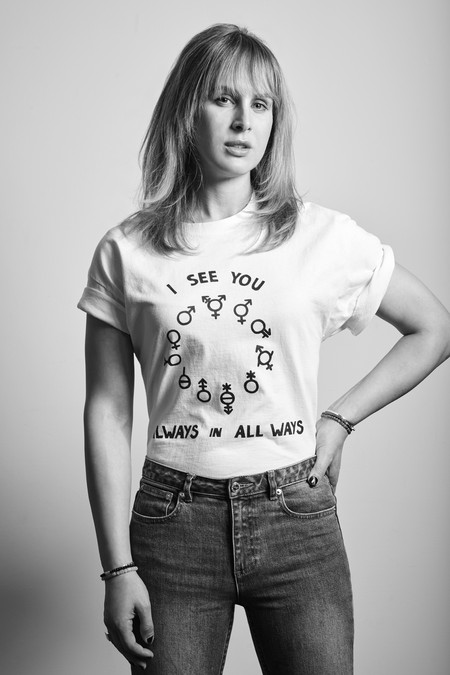 Zackary Drucker is a transgender performance artist who aims to break down the way we think about gender and sexuality. The artist uses female pronouns, and through her participatory pieces she complicates established binaries of viewer and subject, insider and outsider, and male and female in order to create a complex image of the self. Her most recent work is featured in Aperture magazine, in an issue guest-edited by Tilda Swinton. 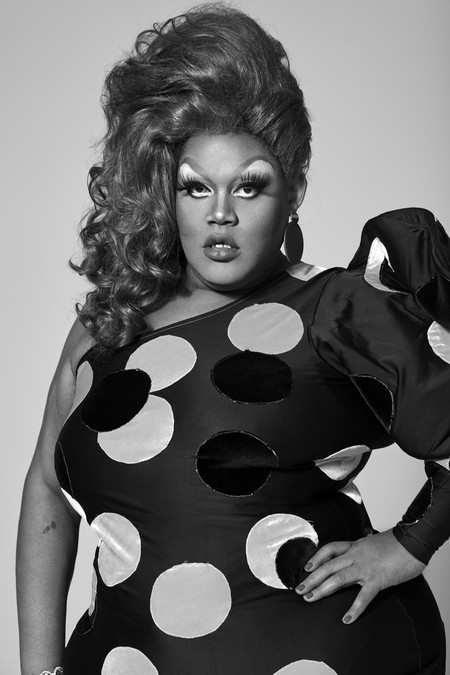 Merrie Cherry is a force in the Brooklyn drag scene. She got her start as the coat-check girl at Metropolitan, one of Williamsburg’s early gay bars. Cherry eventually asked the manager if she could lead a drag party of her own and since that time has hosted the monthly competition DRAGnet. Cherry is a fixture at performance-art space and dynamic drag festival Bushwig. In Cherry’s drag family, showing up, stepping up and having each other’s backs are guiding values. 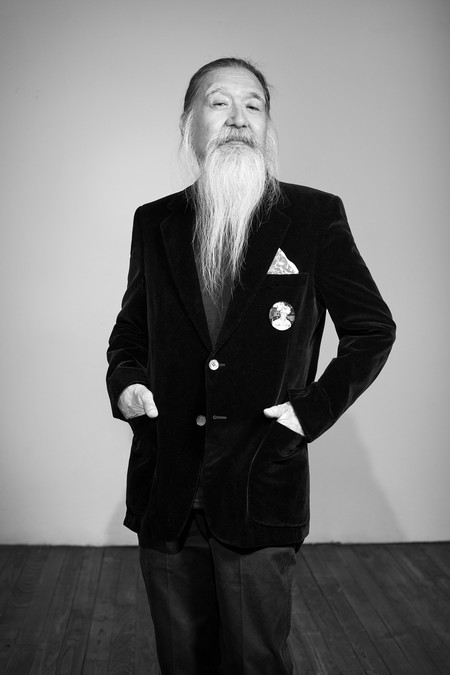 Agosto Machado is a Chinese-Spanish-Filipino performance artist. Machado frequented Stonewall, marched regularly during the ’60s and was also part of the Gay Liberation movement. He speaks out about discrimination by white cis gay men against trans women and people of colour within the LGBTQ community, and how these people’s voices were silenced. 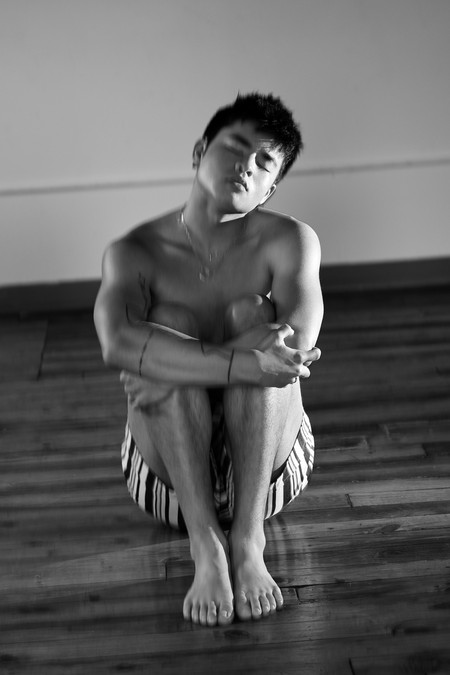 Chella Man is a deaf, genderqueer, queer artist currently transitioning on testosterone. His main focus is to educate others on issues regarding being queer and disabled within a safe space. He shares his struggles with gender dysphoria with more than 200,000 subscribers on his YouTube channel. 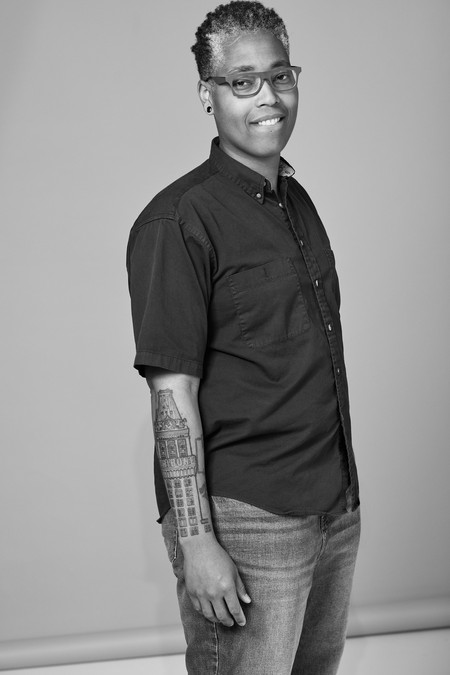 Sean Saifa Wall is an intersex activist, artist, writer and public-health researcher in Atlanta, Georgia. He is the co-founder of the Intersex Justice Project, which aims to #EndIntersexSurgery, and says his activism is fuelled by anger and love. 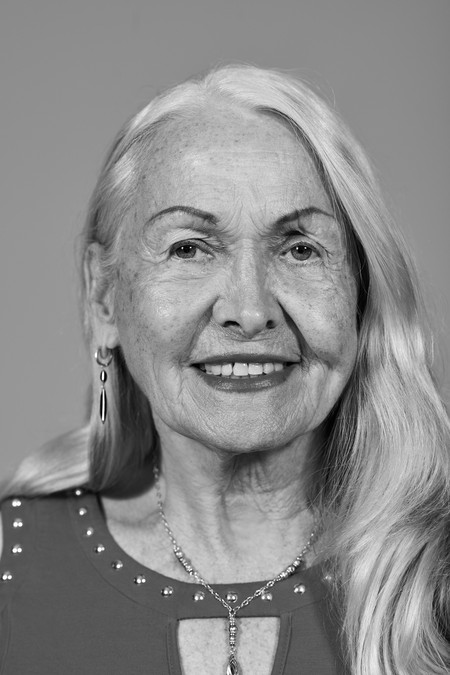 Judy Bowen was raised in a religious home in the South. She was unable to conceal her transgender identity and moved to New York after witnessing racist and transphobic violence. After the Stonewall uprising, she became an activist and started two transgender support organisations. Today, she is a member of The Center in Las Vegas and a champion of the Safety Dorm for transgender individuals at the Salvation Army. 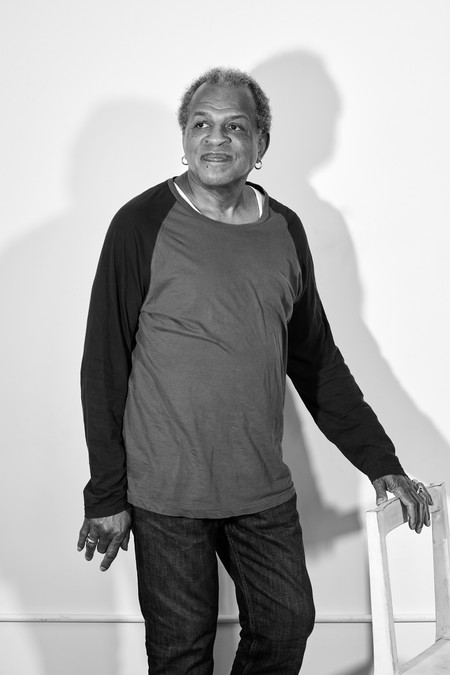 Wallace Sanders is a native New Yorker and teacher. While serving during the Vietnam War, a friend told him about the Stonewall, where he discovered the city’s gay scene. A homophobic incident at his school led him to join the city’s Commission on Human Rights. He helped to pass the gay rights bill in 1986. 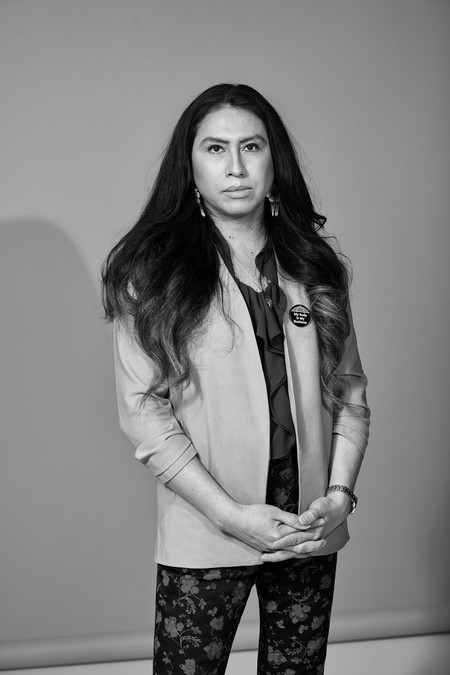 Bianey Garcia is a community organiser at Make the Road New York, a non-profit organisation that provides services for Latinx and working-class communities in Queens. Born in Mexico, she was forced to relocate at 14 as a result of transphobic violence. Later, in New York, Garcia faced racist and transphobic policing and was incarcerated at Rikers Island. She subsequently found support with other trans people of colour, leading her to organise the first Trans-Latina March. 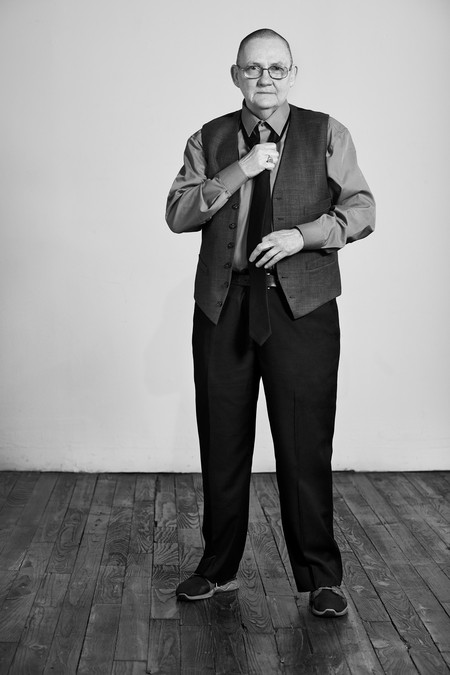 Jay Toole grew up in an Irish Catholic home in the South Bronx in the 1950s. At 13, Jay came home with the butch haircut of the day, a flattop. Her father threw her out and for the next eight years she lived in Washington Square Park. Targeted by the NYPD, she was incarcerated. Jay co-founded Queers for Economic Justice, a non-profit promoting economic justice in a context of sexual and gender liberation. 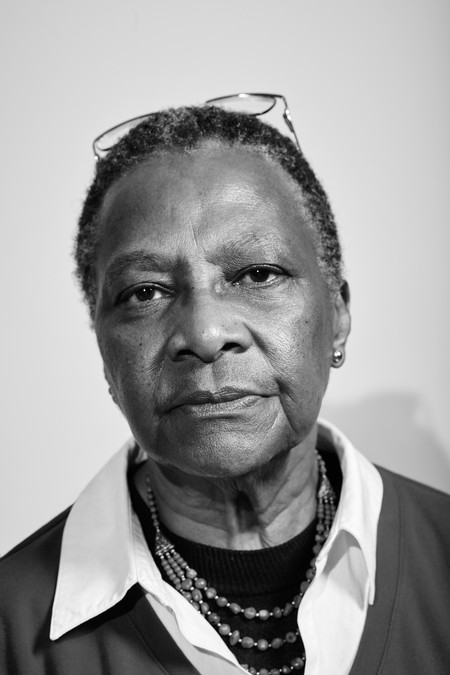 Achebe Powell has been an activist since high school. She was a professor, a social worker and an employee at Kitchen Table Press before she went on to diversity and anti-racism training, work that has taken her around the world in the fight for human rights and liberation. She is a founding member of Salsa Soul Sisters and the Astraea Foundation. 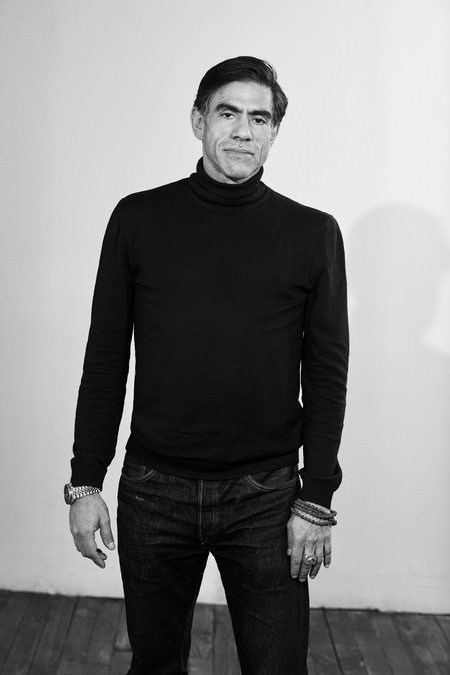 Writer and artist Gregg Bordowitz has been making works that explore his Jewish, gay and bisexual identities within the context of the AIDS crisis since the 1980s. Director of the MFA programme at the School of the Art Institute of Chicago, he was an early advocate for New York’s ACT UP AIDS group. 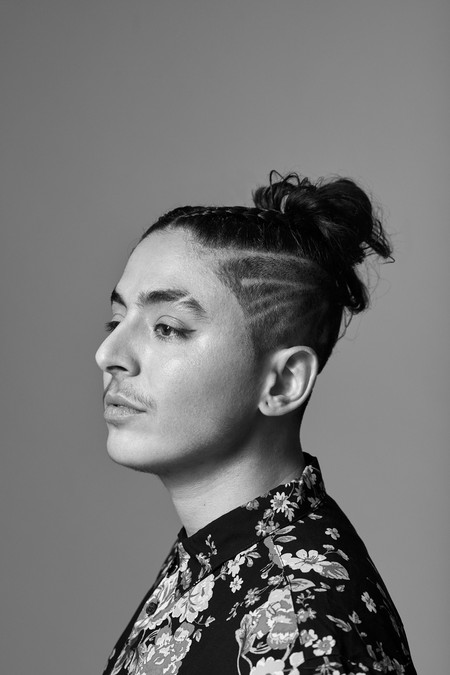 Pidgeon Pagonis is an intersex writer and artist. They identify as queer and non-binary. Pagonis is an advocate for intersex human rights and against non-consensual intersex medical interventions after their own experience as a child. Since 2015, Pagonis has inspired intersex people to share their experiences with the hashtag campaign #IntersexStories. 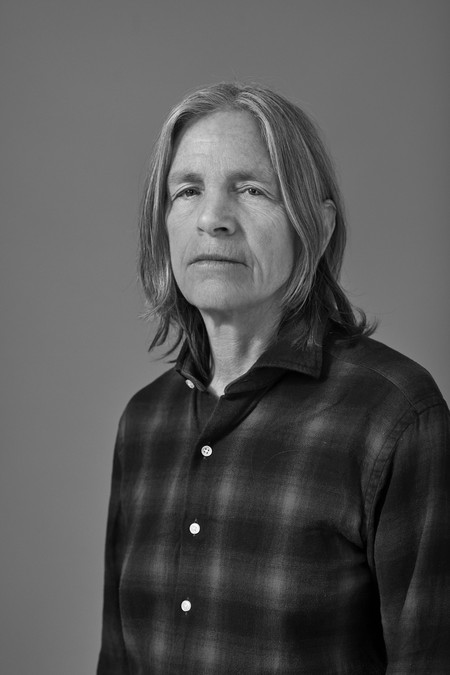 Eileen Myles was born in Cambridge, Massachusetts. They moved to New York City in 1974 to be a poet, and subsequently a novelist and art journalist. They gravitated to The Poetry Project at St Mark’s Church, where they studied with many notable American poets. From 1984 to 1986, Myles was the artistic director of the project, and they have received numerous awards and fellowships over the years for their 20 published volumes of poetry and fiction. 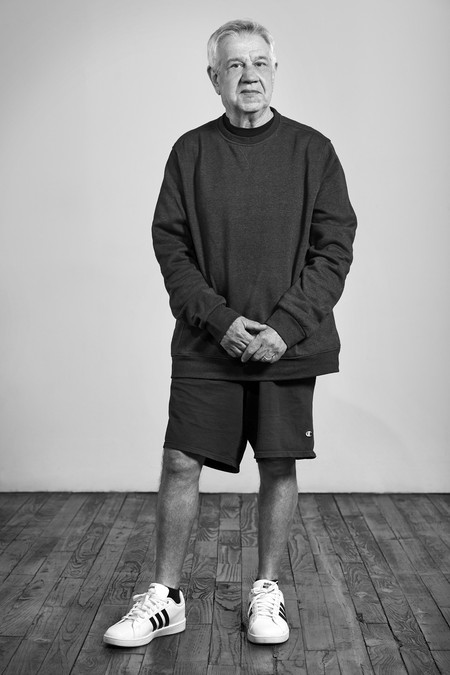 Martin Boyce, now a chef living in the Yorkville neighbourhood of Manhattan, was at the Stonewall on the night of June 28, 1969. In the 1960s, he was astonished by how the littlest drop of eyeliner would make people go mad, but by the post-Stonewall mid ’70s he felt that he had no reason to shock: the word was out. If he was going to fight, it would be with political action.