Christabel Balfour is an artist and weaver living and working in South East London. She has studied at University of the Arts London and the Ruskin School of Drawing and Fine Art, and her practice explores the intersection between fine art and craft. She began weaving as a small child and has never been able to stop. “Simple Cities”, a solo show of her woven work, is currently on in London at Craft Central. 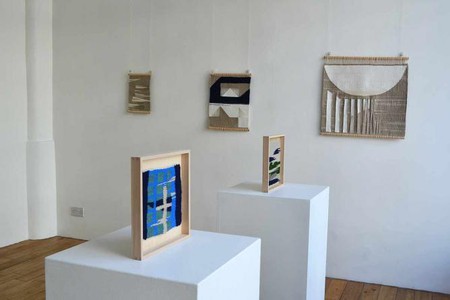 A: I think the word “artist” is such a broad term and covers so many things, so adding “weaver” to it clarifies what I do. Anywhere other than the art world, weaving is respected because it is a craft that has to be mastered. It’s only in the art world that “craft” can be a dirty word. So that’s why see myself as both. I am influenced by my fine art background, but my tapestries are clearly decorative.

Q: So what first drew you to the craft of weaving? And how central is the process of weaving to your current show of woven work, “Simple Cities”?

A: I first started weaving on a toy loom from IKEA (which I still own) that my mother bought me when I was a child. I then went to a school with an excellent textiles department so I had a firm grounding in textile art, although it’s only been over the past year or so that I have concentrated primarily on weaving tapestry, which I taught myself using books and the internet.

It is a deeply calming process, although you do have to be incredibly patient and focused, as weaving itself is a repetitive, laborious and at times back-breaking process. A “fast” weaving takes eighteen hours. But when it’s going well, weaving is my favourite thing in the world. Rather than struggling against its limitations, in this show I have tried to embrace and reflect the process of weaving – the serenity of that time alone working and doing what you love.

Q: Can you tell us a little more about “Simple Cities”? What about this show is most important for you?

A: My initial reason for doing this exhibition was to challenge myself. Previously I’d only done group shows, open studios and open houses, and I wanted to do something bigger. Also it is important for me to have set deadlines; otherwise I go to the studio to work and end up on Netflix. 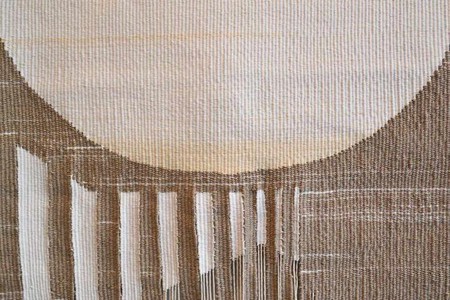 My earlier works were much more intricate, filled with endless geometric patterns. I wanted to create a more tranquil atmosphere, and so I began to incorporate more pure fields of colour, stripping away the multiple shades and textures I have worked with in the past.

“Simple Cities” as a concept came out of that journey of simplifying my designs, and it is a play on the word “simplicity”. I also wanted to touch on my struggle with living in London, which is so crowded and busy. I wanted to not only evoke the open spaces of nature and the landscape, but also suggest a simplicity and inner calm that can be revealed amid the urban chaos.

Q: You can definitely sense a commitment to landscape and setting alongside the more abstract nature of a lot of your work. What are the other creative influences on your work? Do you see yourself as belonging to a community of artists or craftspeople?

A: It’s funny because although I sometimes have this image of myself as a mad artist slaving away alone in the studio, in London it is almost impossible not to find yourself forming communities with other creative people. I have a lot of artist and musician friends and I’m so lucky to be part of the team of At the Table, which is a creative community designed to encourage everyone to bring their gifts to the table. I am also an enormous fan of Instagram (after swearing I would never get it and mocking people for using it) and there is a fantastically supportive creative network online.

In terms of creative inspiration my ultimate guru is Mimi Jung. I also obsess over the fashion of Faustine Steinmetz on a regular basis. There are many, many more but some lasting artistic influences have been Eva Hesse, Paul Klee, Richard Long, and JMW Turner. I cried (embarrassingly) the first time I visited the Turner Wing at Tate Britain. 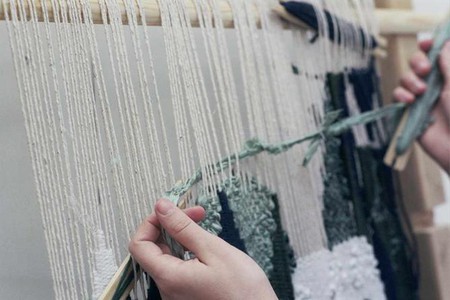 The weaver at work, photographed by Sophie Buxton

Q: So looking forward – what’s next for this twenty-something weaver living and working in London?

A: I am currently focusing on weaving full-time, so the main goal will be to spend at least eight hours in the studio most days and work. I want to produce more functional pieces, such as rugs, cushion covers and so on, but also balance that with large-scale wall-hangings. My main project for the summer though is to have a huge clear out of all my old work from storage so that come September I can start afresh.