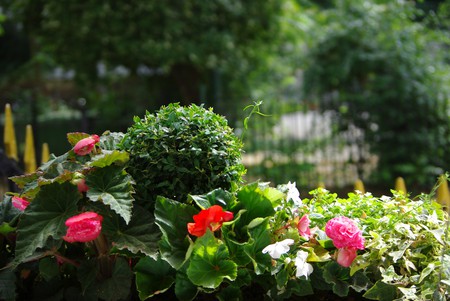 Bloomsbury, a once aristocratic enclave and London’s first suburb, is a network of quiet squares and grand Georgian terraces. The area has long attracted artists, authors and lawyers who weaved the area’s ambience into their work. 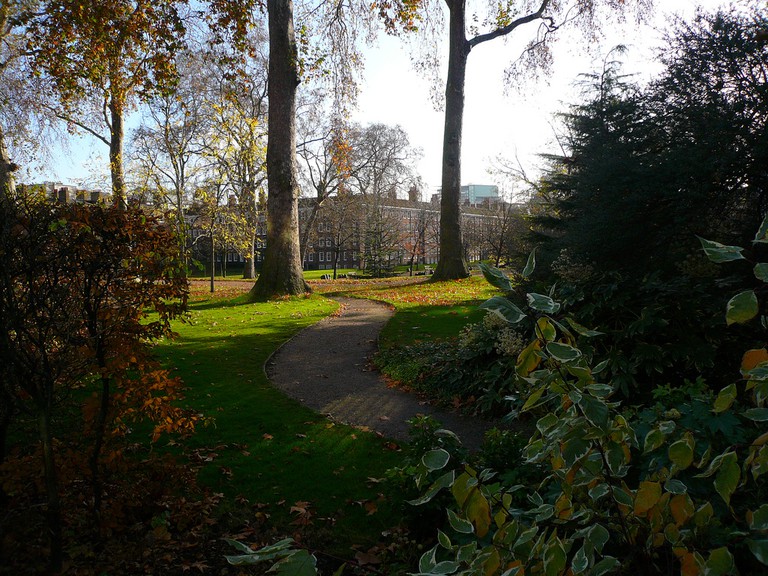 Gray's Inn Gardens | © Ricardo / FLikr
Gray’s Inn is one of the famous law courts, which date back to 1370. Only three others remain. It became part of Charles Dicken’s literary world in the 19th century after the famous author lived and worked in the square. It was also the site of the first performance of William Shakespeare’s A Comedy of Errors in 1594.

Food/Drinks nearby: Gourmet coffee shop Prufrock is five minutes away.

Gray's Inn Gardens | © Ricardo / FLikr
This picturesque inner city garden was first laid out by Sir Francis Bacon in the 17th century, and it originally would have contained a kitchen garden and a bowling green. It was updated by famous landscape architect Capability Brown to what we see today, and has provided famous authors and poets with respite from London – the poet Shelley used to meet his wife here on Sundays, the only day when he couldn’t be arrested (for owing money).

Food/drinks nearby: Pop in for a posh afternoon tea at Beas of Bloomsbury round the corner. 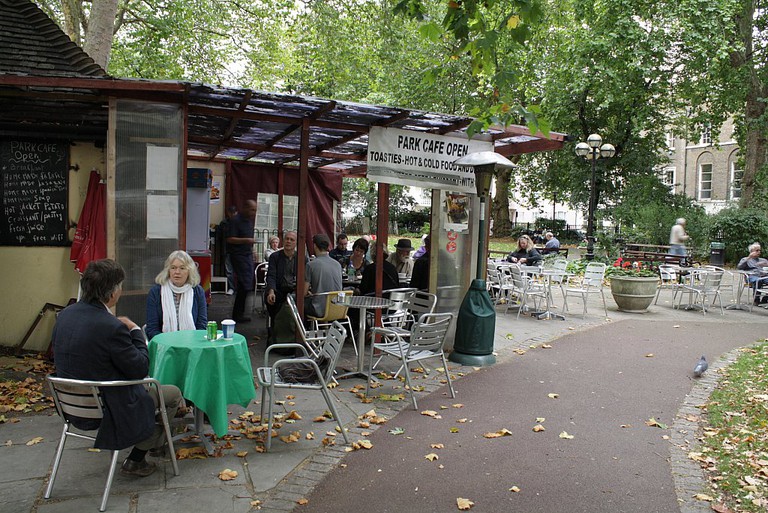 Sitting in Red Lion Square | © Delaina Haslam / FLikr
Created in 1698 by Dr Nicholas Barbon, one of London’s first residential developers (and named after a nearby pub), Red Lion Square is one of the only squares with buildings dating back to the 17th century.

In the mid 19th century an artist called William Morris moved into number 17 with some friends, and tried his hand at textile design. He would go on to found that century’s Arts and Crafts movement and create some of the most iconic British textiles and wallpapers. In 1861, he moved to number 8 and set up his business officially.

Food/drinks nearby: Stop for a quick Korean barbeque at Kimchee Restaurant and Bar on Red Lion St.

Distance to next stop: 0.2 mile
Open In Google Maps
London, United Kingdom
Give us feedback 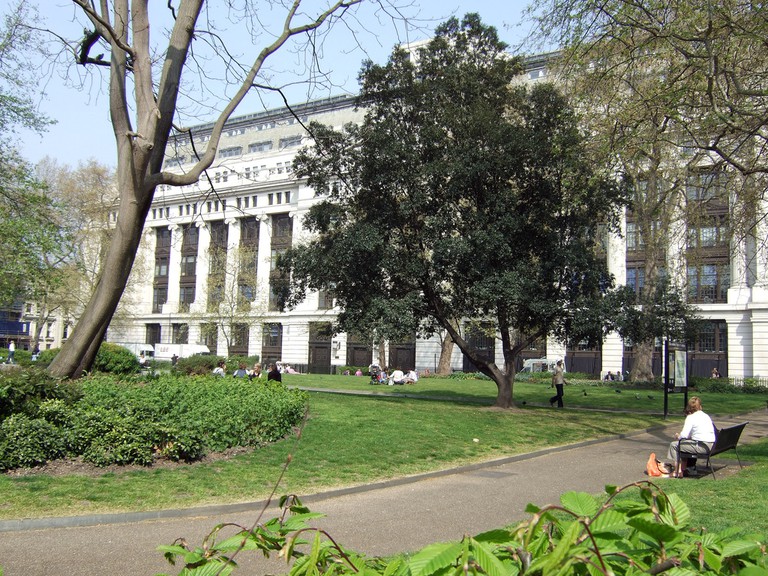 Bloomsbury Square | © John Keogh / Flikr
Bloomsbury sprung up after the Great Fire of London in 1666, when the aristocracy wanted to feel safer with more space between the houses. It was one of the first suburbs, and this square (a first for London) was the centre of a huge estate that was developed for nearly 200 years by the Earl of Southampton. It remains one of London’s best examples of Georgian architecture. The square wasn’t landscaped until 1807, but remained private until World War II when its railings were melted down for armaments. Dozens of notable people have lived around Bloomsbury Square including former Prime Minister Benjamin Disraeli and Sir Richard Steele who founded Tatler and The Spectator magazines.

Food/drinks nearby: Head to the All Star Lanes for bowling, retro burgers, shakes and cocktails. 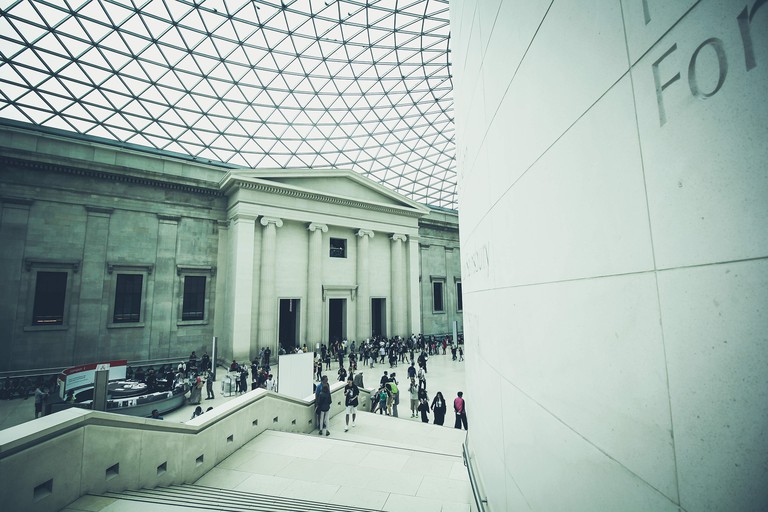 The Great Court at the British Museum | © Pixabay
Book Now
The British Museum sits at the heart of Bloomsbury like a sleeping giant. It was founded by Sir Hans Sloane who didn’t wish to see his curiosities collection broken up after his death. It was established by King George II in 1753 to house the 71,000 books and treasures bequeathed by Sir Hans Sloane. The neo-classical building we know and love today was started in 1825 and finished in 1857, but less than fifty years later it had outgrown the space, so the museum purchased 69 houses around it and expanded. It hasn’t stopped growing, with the Great Court added in 2000.

Food/drinks nearby: Relaxed pub, The Square Pig is nearby serving British tapas and beers 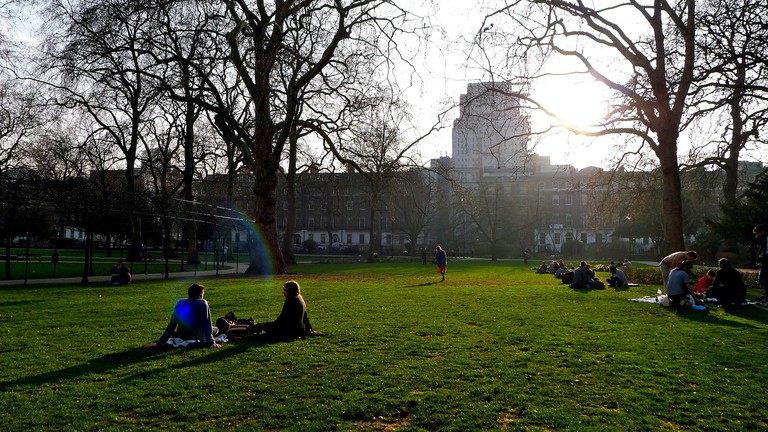 People enjoying Russell Square | © Martin Deutsch / Flikr
While Bloomsbury Square is the oldest, Russell Square is the city’s largest. It was built for the Duke of Bedford in 1799 and star architect of the day James Burton designed the grand Georgian houses that surround it. Poet TS Eliot had his offices in the west corner of the square in the 1920s and famous suffragette Emmeline Pankhurst lived at number 8 from 1888-1893.

Food/drinks nearby: Stop for a pick me up at Coffee & Candy on the edge of the square 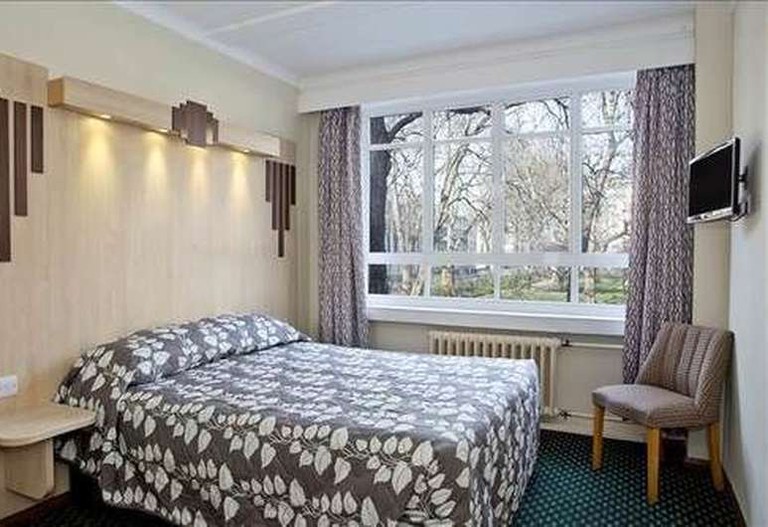 What the Tavistock Hotel lacks in interior design it makes up for with location | Courtesy of Tavistock Hotel / Hotels.com
On the south side of the grand Georgian Tavistock Square sits the Tavistock Hotel, once just number 52. It was here that Virginia Woolf and her husband Leonard lived from 1924 – 1939, and it became the heart of the famous Bloomsbury Set that included painter Duncan Grant and novelist EM Forster.

Food/drinks nearby: Head to the Bloomsbury Coffee House, a vintage-themed basement cafe with homemade cakes 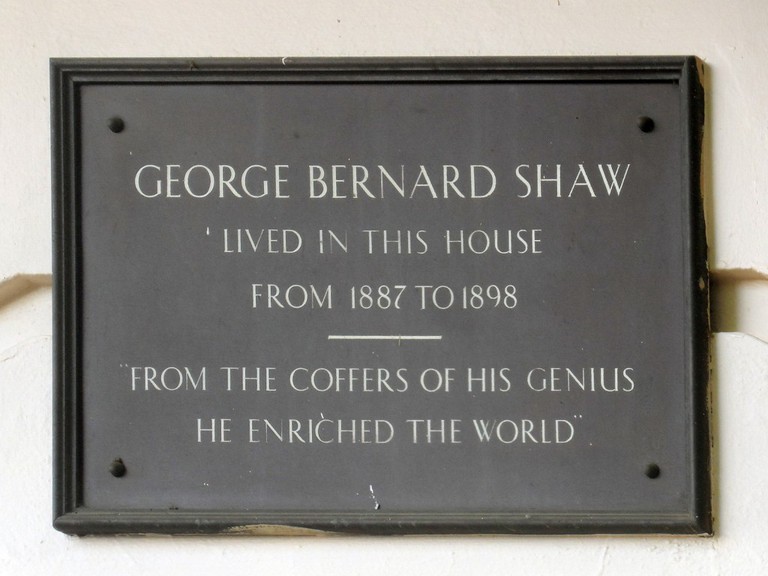 George Bernard Shaw lived here | © Spudgun67 / Flikr
Fitzroy House is a fantastic example of late 18th century architecture, and it has a long lived literary history. Irish playwright George Bernard Shaw lived here (with his mother) during the 1880s, and 75 years later L Ron Hubbard, the founder of Scientology took up residence. The house has been left as he left it, with communications devices and typewriters from the 1950s.

Food/drinks nearby: At the end of the street is The Lukin a cosy gastropub.
Open In Google Maps
37 Fitzroy Street, Bloomsbury, London, England, W1T 6DX, United Kingdom
+442072552422
Visit Website
Give us feedback
Give us feedback