A Walking Tour of the Best Brutalist Architecture in London 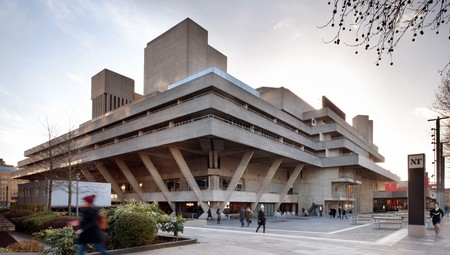 Brutalism has a bit of a bad rep, but our architectural tour is here to change that – swap the conventional sights of London for some concrete beauties on your next visit. Here’s how to spend the day seeing the city in a whole new light.

Most people take a stroll along London‘s Southbank to visit the Tate Modern or Shakespeare’s Globe, but there’s plenty of other architectural gems along this stretch. Start at the Southbank Centre, a world-renowned destination for the arts that was erected in 1951 to celebrate the Festival of Britain. The site is home to several important venues, including the Royal Festival Hall, the Hayward Gallery and the Queen Elizabeth Hall, all of which hold varying events such as comedy stand-ups, variety shows, musical performances, intellectual and educational programs, and festivals. 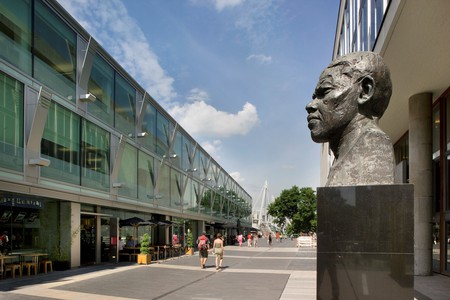 The Grade II-listed Royal Festival Hall auditorium is the biggest venue at Southbank Centre, seating 2,500 people. The architect of the building was Robert Matthew, supported by Leslie Martin and Peter Muro. It was designed to be a true landmark of British Modernism, with a bright-white facade and huge expanses of glass to give the building a light, optimistic feel. The flowing, wide open-plan interior was constructed around symmetrically placed staircases, with Martin in particular influenced by socialist Nordic design. The various foyers, bars and restaurants were intended to be classless spaces, open to all, honoured today by the building’s radical ‘open foyer’ policy, which allows the public to roam throughout the building seven days a week. Free exhibitions, lunchtime and evening concerts are on offer, as well as various study and meeting spaces and a variety of bars. 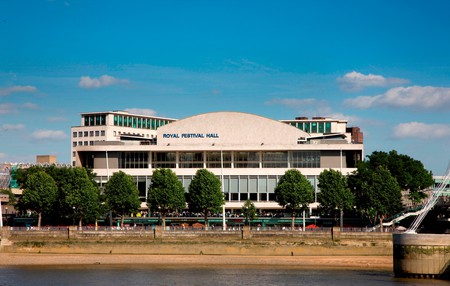 The Hayward Gallery is one of the world’s leading contemporary art galleries. Since it opened in the summer of 1968 with an exhibition by Henri Matisse, it has played a crucial role in presenting work by some of the world’s most significant artists. It was recently closed for two years in order to restore the 66 glass pyramid roof lights, which were based on a concept by sculptor Henry Moore. The multi-million pound refurbishment was completed in January 2018, holding a major show of Andreas Gursky’s work. 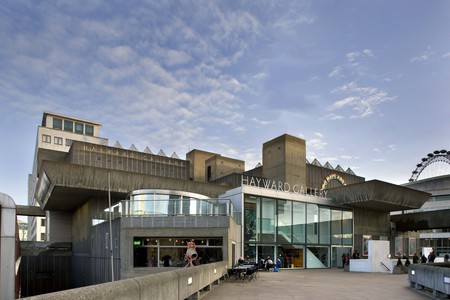 Recently renovated, Queen Elizabeth Hall has a wonderful roof garden with stunning views and is open daily in the spring and summer months and free to visit. Fun fact: you might notice an unusually placed ‘boat’ on top of Queen Elizabeth Hall. The ‘Room for London’, designed by Living Architecture is actually available to stay in on occasions. 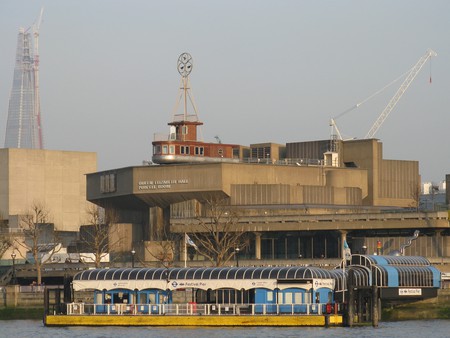 There are plenty of food trucks along the riverbank for a low-key lunch or pre-performance bite before heading along to the National Theatre, as well as many on-site restaurants. For something a little bit special, and great views over the Thames, try Skylon, which serves up quintessentially seasonal British dishes.

Designed by the architect Denys Lasdun, the National Theatre has divided public opinion since it opened in 1976. In 2001, a Radio Times poll featured Denys Lasdun’s building in the top five of both the most hated and the most loved British buildings. A neighbour of the Southbank Centre, the theatre may seem like a large hunk of concrete on the surface, but once you discover the attention-to-detail and groundbreaking construction methods behind it, you’ll come to realise its beauty. To get a real understanding of why the National Theatre is such an important icon of Brutalism, take up one of the ‘Concrete Reality’ architecture tours.

Crossing Waterloo Bridge, it’s worth stopping by and gazing up at the King’s College Macadam Building, which was built by Troup, Steele & Scott with E.D. Jefferiss Mathews acting as consultant. Construction started in 1972 and took three years to complete. The building on Surrey Street houses King’s College Student Union, with its six storeys balancing on top of a two-storey podium. 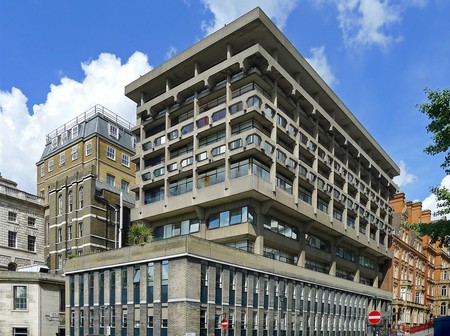 Just around the corner on The Strand is the aptly-named Strand Building, which is again part of the college. The 1970s building has recently been involved in some contentious plans to knock down four adjacent period properties, in order to make way for a new teaching building that will ‘blend in’ with the Brutalist one. 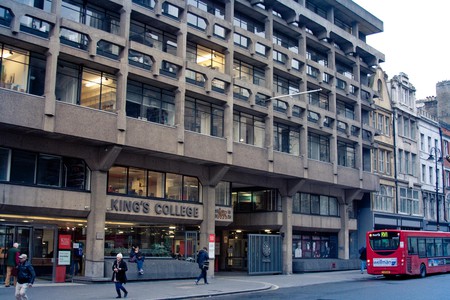 To get here, you could take a leisurely half-hour stroll along Fleet Street, the former home of London’s newspaper industry, passing the Royal Courts of Justice and St Paul’s Cathedral on the way before turning up Cheapside and along London Wall. Located on Fore Street, the old Salters’ Company headquarters, built by Basil Spence, is a very rare example of a post-war livery building, and was completed in 1972. Notable for its distinctive ribbed and knapped concrete, the hall is now Grade II-listed and has recently been refurbished by architect De Metz Forbes Knight, which won planning consent for the £8.5 million project. 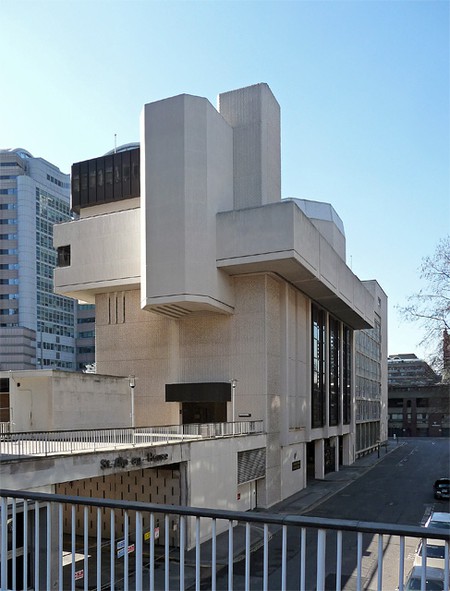 Saving the best until last, you can’t miss the Grade II-listed Barbican Centre, which is Europe’s largest multi-arts and conference venue and one of London’s best examples of Brutalist architecture. It was developed from designs by architects Chamberlin, Powell and Bon as part of a utopian vision to transform an area of London left devastated by bombing during the Second World War. It took over a decade to build and was opened by the Queen in 1982, who declared it ‘one of the modern wonders of the world’. 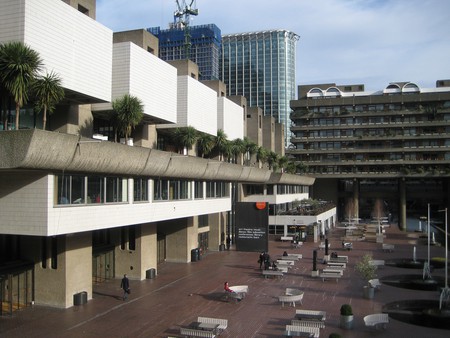 Its stunning spaces at the heart of the Barbican Estate have made it an internationally recognised venue, set within an urban landscape acknowledged as one of the most significant architectural achievements of the 20th century. The best way to tour the Barbican Centre and surrounding estate is to book the Barbican’s 90-minute walking tour. Walking along the highwalks, elevated gardens and trio of high-rise towers, you’ll learn more about the construction, design and influence of the estate, along with surprising and rarely seen sights and discoveries plus little-known insights into this unique architectural endeavour. 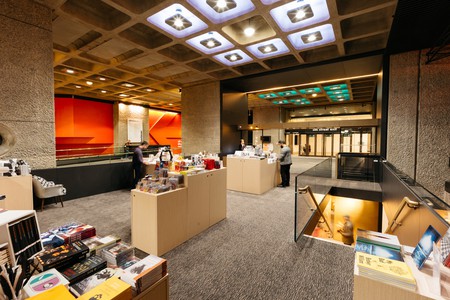