Salvador Dalí, a leading figure of the 1930s surrealist art movement, has long since captivated the art world with his avant-garde paintings. One of these, the Metamorphosis of Narcissus painted in 1937, is on display at London’s Tate Modern. At first glance, the story isn’t instantly obvious to the viewer yet closer inspection of the painting and its iconography reveals the ancient Greek myth told in its entirety. 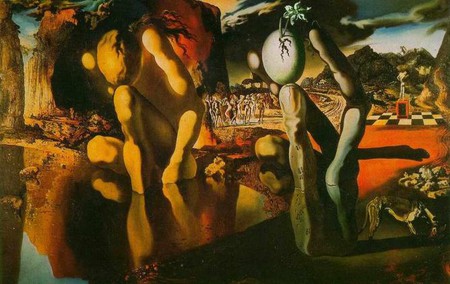 This well-known Greek myth of the boy who fell in love with his own image is re-imagined through Dalí’s vision. The depiction of the tale isn’t in a conventional form and appears to be split into two; there is a sort of dividing line down the center of the painting that almost creates two mirror images. Dalí frequently used double images in his work, which partly stemmed from his own interest in hallucination.

Narcissus is seen in the background standing upon a pedestal, which alludes to the high pedestal he placed himself on, posing in a vain manner. His proud and arrogant nature caused him to reject multiple romantic advances and famously led to one dejected admirer cursing him to “fall in love and never obtain his desire.”

The wish born out of anger and scorn is fulfilled by the goddess Némesis, who then transforms Narcissus from proud and hard-hearted to the rejected lover himself when he sees his reflection in a pool. He instantly falls in love with the face that many others had before him and, now in love with an unobtainable figure, experiences the effects of unrequited love thus becoming privy to the pain that he inflicted upon those he spurned.

Dali foreshadows the reversal of Narcissus into the rejected lover, represented by the figure that is kneeling in the pool that ultimately claim his life. Depicting Narcissus in this way, which is substantially different to how he is shown on the pedestal, highlights the transformation that his character has undergone. In Dalí’s portrayal, Narcissus is metamorphosing into the hand, which is holding the egg that the narcissus flower springs from.

The shapes of the kneeling figure and of the hand holding the egg are very similar to each other. The knee has become the thumb, the arm is now a finger, and the head has turned into the egg. They are so similar, in fact, that the crack in the egg is nearly identical to the shape on the head of the kneeling Narcissus.

The colour of these two shapes are also revealing; the kneeling Narcissus has a more flesh and yellow tone to it, while the Narcissus holding the egg is a subdued tone of gray. The difference in the colors may symbolize the life and death of Narcissus; when staring at his own reflection he was alive, yet his transformation into the flower is a posthumous one and the grey tone may reflect the now-deceased Narcissus.

Dalí’s Metamorphosis of Narcissus is a prime example of how two seemingly opposite genres, that of modern art and ancient myth, can be brought together. The painting demonstrates how a traditional subject or story can be represented in a new way that remains true to the original yet has contemporary relevance.

Metamorphosis of Narcissus is on display at Tate Modern, Level 2: Poetry and Drama. Room: Surrealism and Beyond Bankside, London, England, +44 20 7887 8888

Soraya Jane Kashfi has a BA (hons) degree in history of art and works as an art consultant in Hertfordshire and London. Her personal blog, Teacup Moment focuses on her inspirations and interests in art, photography and fashion history. In her spare time, she works on her ongoing writing and photography projects.