Love Letter to a London Trend: Socks and Sandals 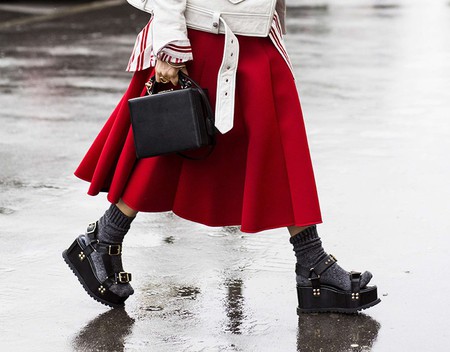 A metaphysical investigation of the socks and sandal phenomenon, by India Doyle.

The time was 7.55 am. It was a Wednesday morning and the sun was coming through the crack in my door from the window across the hall. The weather on BBC said showers later on – what to do, what to do?

I stood in front of my shoes and surveyed them like a politician making policy: which of these looks good and doesn’t require too much work? Sandals, of course, were the right choice, and I had no shortage of those. But what if I got cold? To my left, a dust-covered chest of drawers slouched wearily, already subject to another morning of rough and tumble. But that was the obvious choice. I’d just put socks on, I could always take them off – everyone was doing it. I greedily put on a pair of white ankle socks with a Nike tick (well, I might as well do it properly, non?) and then followed with my most understated pair of white strapped Dr. Martens with chunky sole (the next best thing after Marni, and a little cheaper). Without another glance in the mirror, I clipped then hoisted my bumbag around my waist and made my way to the office. 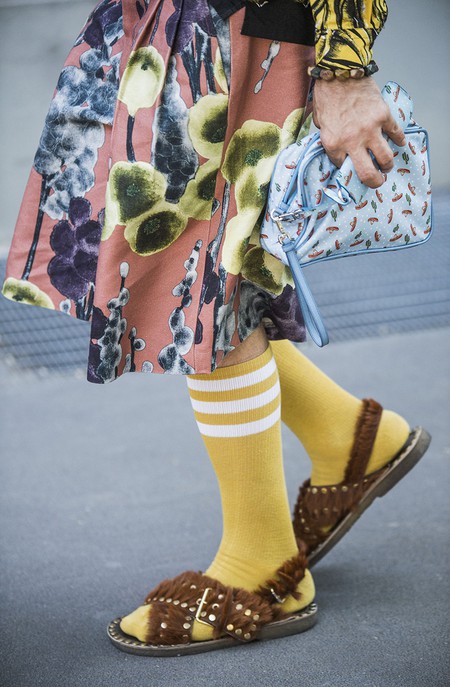 The tube was humid and sweaty and downstairs, my toes began to stick to each other, I wiggled them in my Nikes and felt absurd. What do socks and sandals deliver that shoes don’t? Socks aren’t even waterproof, I realised as I stared down at the grotty tube floor. ‘Someone has blundered’, the other passengers seemed to whisper in between the thunderous waves of commuters getting on and off. Along the carriage an American tourist gave me a knowing wink, flashing his version while wiggling in his khaki shorts and adjusting his weather-beaten cap.

If a tree falls in the woods…

Perhaps wearing socks and sandals in London wasn’t as okay as Gucci or Prada or Vetements or Lou Dalton, or even Queen Ri Ri suggested; a woman in Issey Miyake trousers and Nike Huaraches grimaced at me, ‘Hello? it’s called fashion’ I thought, twisting my bumbag around to my front.

The socks and sandals look, now firmly established on the trend radar, treads a thin line between frumpy and frivolous. Indeed, fashion has never been considered functional, which makes the embrace of the most functional of sartorial solutions ironic indeed. On catwalks across Europe, and on the streets around, everyone is in on the joke. At Lou Dalton, her model army wore simple black strap sandals coupled with the classic white, over-the-ankle sock. Other designers such as Prada and Miu Miu went a little flashier in recent collections. For Spring/Summer 17, Prada menswear bright yellow plastic styles with thick wool socks, and at Versace royal purple and gold strappy sandals with black socks were one of the main attractions on the catwalk. 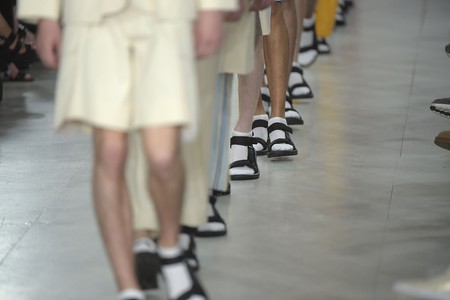 The trend marries two new sartorial threads. The first is the rise of the ugly shoe, and the second is the fetishism of the sock – recently declared by Business of Fashion as fashion’s hottest accessory.

But when does ironic fashion become post-ironic? There’s certainly a point where the commandeering of a lame fashion solution comes full circle and makes you lame too. Gucci has invited ugly, chaotic fashion into the mainstream and everyone in the know will gladly recognise that your ‘more is more’ outfit that combines purple velvet frills with green culottes, sequin encrusted headbands and yellow platform shoes is in style. But outside of the industry context, it’s a different story. To coin the tree in the woods fable: if no-one else in fashion sees you wearing socks and sandals, is it still fashion?