A Look Back at London’s Suffragette Hospital

The suffragettes behind WWI’s Endell Street Military Hospital were able to keep the fight for women’s votes on the table when the war effort threatened to derail the whole movement. How? Unparalleled professionalism (and more than a bit of media savvy).

Chemical weapons, machine guns and the muddy trench warfare during WWI resulted in devastating casualties. In many cases, it was women doctors who nursed soldiers back to health. Their expertise, crucial to the war effort, also helped secure women the right to vote in 1918.

By the end of WWI, women ran war hospitals all over Europe, but it was the opening of London’s Endell Street Military Hospital (ESMH) in 1915 that really forced the Home Office to reconsider their previous dismissal of women’s competency. Run entirely by women – from administration to orderlies – ESMH was the true embodiment of the suffragette slogan ‘Deeds not Words’. 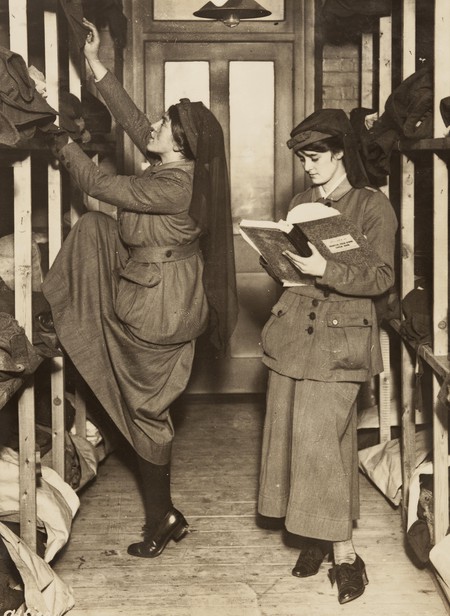 Deemed the ‘suffragette’s hospital’, ESMH was founded by two prominent figures of the movement – Louisa Garrett Anderson and Flora Murray. During its five-year tenure, over 7,000 surgeries were performed and around 26,000 soldiers received treatment there. But the hospital’s true success was that Anderson and Murray knew how to get the attention of the press.

“It was described as the most popular hospital in London, the best run, the most efficient,” says Wendy Moore, whose book, Endell Street, is set to be published in 2020.

Endell Street’s high profile was largely due to Anderson and Murray’s propagandising. The visibility of their work likely influenced the British government’s decision to grant women over 35 the right to vote in 1918. “The vote was seen to some extent as a reward for women’s work in the war,” explains Moore.

To say the partnership between the British War Office and suffragettes was unlikely is a vast understatement. Before WWI, ‘Deeds not Words’ had a more violent connotation. Coined by Emmeline Pankhurst in 1903, the slogan energised the movement’s militant factions.

At the turn of the 20th century, members of groups like the Women’s Social and Political Union smashed windows of prominent political buildings to demonstrate their opposition of British voting restrictions. Many were arrested. Among them, Louisa Garrett Anderson.

Anderson’s life had long been shaped by empowered women – her aunt, Millicent Fawcett, was one of the movement’s early leaders and her mother, Elizabeth Garrett Anderson, was the first woman doctor to be qualified in Britain in 1865. 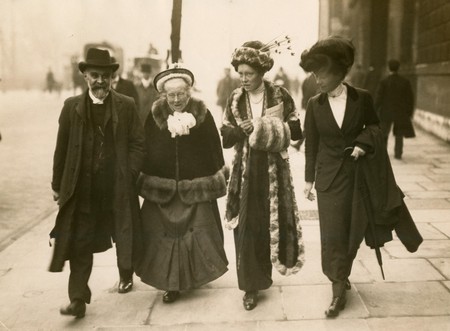 Murray was no stranger to militant activism either. Moore details: “Not only was she Emmeline Pankhurst’s honorary physician, Murray also helped Mrs Pankhurst to evade the police on occasion.”

The phrase ‘Deeds Not Words’ – emblazoned above ESMH’s recreation room theatre – was the governing principle of their lives. When war broke out, Anderson and Murray jumped to action.

They knew their expertise was needed and likely joined the war effort for patriotic, not political, reasons. But the two women were also acutely aware that a military hospital entirely staffed by women would definitively prove the ‘fairer sex’ was capable of doing ‘men’s’ work. 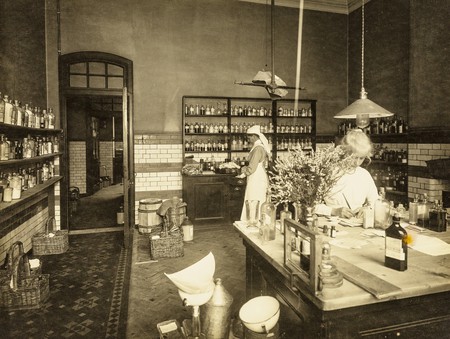 “They were among the first women doctors who went abroad to war,” says Moore. Rather than convince a sceptical Home Office of their medical capabilities, Anderson and Murray went to the French Red Cross and offered to run a military hospital. They were readily granted Hôtel Claridge on the Champs D’Elysees and began treating patients almost immediately.

After only a few months, the British War Office came to Paris to inspect Murray and Anderson’s work. “At first the War Office was very hostile about the whole operation but after realising it was run quite efficiently, the women were asked to run a hospital near Boulogne,” says Moore.

This marked a major turning point for women doctors. Only a few months earlier, the War Office had refused Dr Elsie Inglis’s offer to open a war hospital: she was famously told to ‘go home and sit still’. 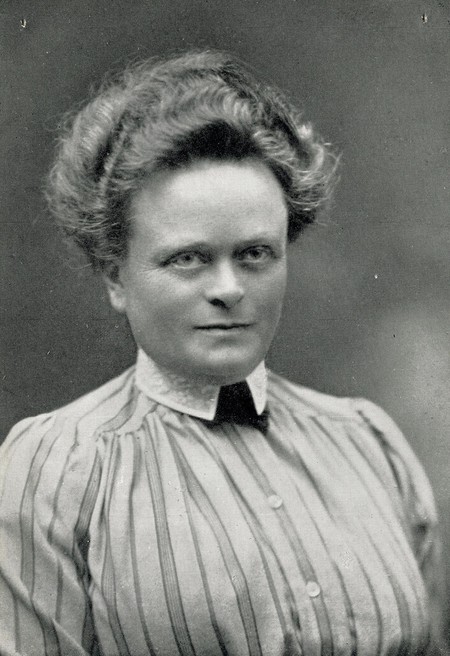 Murray and Anderson’s second war hospital marked the first time women doctors worked directly under the British Army. In 1915, Sir Alfred Keogh, Director General of Army Medical Services, offered Murray and Anderson a hospital in London of up to 1,000 beds. They accepted under the condition that staffing remained under their remit.

In the end, ESMH opened with 573 beds, and Murray and Anderson took advantage of their central location to influence the minds of their fellow countrymen (and women). “Photographers were brought in to take pictures. Flora and Louisa wanted to show their women doing men’s jobs and doing them competently,” explains Jennian Geddes, a retired medic, historian and distant relative of Anderson.

In Geddes’ own collection, an image of Murray really illustrates how photographs were used to demonstrate women’s competency. “It’s totally staged,” Geddes says. “The light is flowing in on Flora from heaven. This is a woman in charge, she’s busy, and these men are waiting attentively for her to look up from her more important business. Fantastic propaganda.” 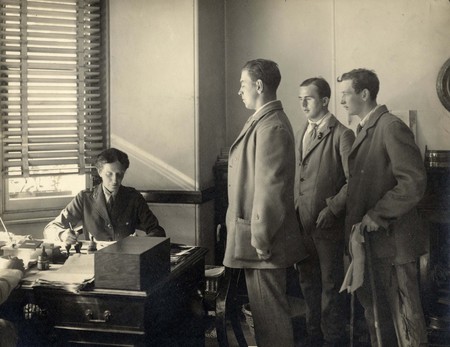 “Since they were based in Covent Garden they were highly visible. People recognised the women’s uniforms everywhere they went. And because the women at ESMH were middle class, they had social connections they could draw on to better publicise their work,” says Moore. Along with press images, the hospital also had postcards and prints made that were used in personal albums.

Murray and Anderson’s partnership continued long after the hospital closed its doors in 1919. In many ways, their work together was a testament to the strength of their professional companionship, but it was also a sign of their commitment to each other.

“Of course, you can’t definitively state they were lesbians,” says Moore, “but they lived together effectively as a married couple, they wore identical diamond rings and had dogs that were like their children. They were very much partners in life.” 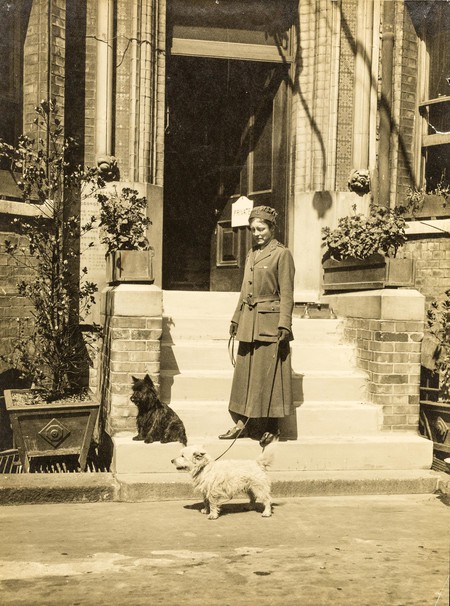 When Murray died from cancer in 1923, she was buried near the couple’s home in Buckinghamshire. Anderson passed 20 years later and their joint headstone reads: ‘We were gloriously happy.’

For much of the hundred years since the hospital’s closure, public memory of Murray and Anderson’s partnership rested with this headstone and ESMH’s legacy was boxed away in the homes of staff’s descendants. Though the women of ESHM were employed by the Royal Army Medical Corps (RAMC), women were still not allowed to serve in the army. Their contribution to the war effort did not warrant entry into the RAMC archives.

“The families knew about the work these women did, but there was nowhere for this information to go,” Geddes says.

Fittingly, the stewardship of ESMH legacy is currently in the hands of women. Geddes successfully campaigned for the installation of a commemorative plaque in 2008, and her initial research has helped Moore with her forthcoming book.

“I handed the reigns over about two or three years ago. Wendy has gone on and found a lot more on the hospital. It’s been great, between us we’ve done a lot to resurrect this story,” says Geddes.