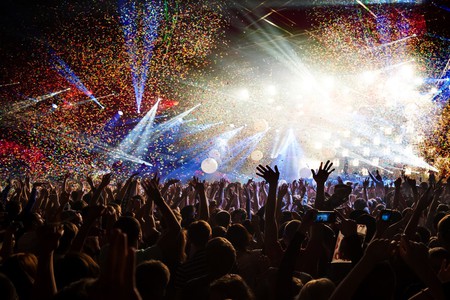 A 98ft-tall fire-breathing spider will be taking centre stage at a music festival in east London next month.

The metal creature has a DJ set-up inside its head and built-in flame cannons which allows it to shoot jets of fire 50ft into the air.

The giant arachnid is part of art collective Arcadia’s award-winning show ‘Metamorphosis’, which will be performed over two days at the Olympic Park in Stratford over May Bank Holiday.

The spider, which is powered by biofuel, is made from recycled former military and industrial parts.

The festival will also include DJ sets from acts like Leftfield, Rudimental, Groove Armada and Noisia.

Arcadia will also be launching a new ‘dancefloor experience’ Reactor, a laser installation that turns a dark indoor space into a matrix, at the festival.

It will feature music and performers flying overhead.

Co-founder Pip Rush told Music Week: ‘There’s so much more to see [with Arcadia], the scale of the sculpture itself, a 50-tonne fire-breathing spider.

‘Then there’s not only the DJ, there are people on the spider operating the hydraulic limbs, performers flying through the sky, zip wires with mechanical spiders going back and forth…

‘There are about 20 people on the structure operating and performing, all jamming to the DJs music really. It all comes alive.’

Pip founded Arcadia with Bert Cole in 2008 with the pair hoping to combine the worlds of recycling, art and dance music.

Glastonbury founder Michael Eavis gave his support and an early version of ‘Metamorphosis’ debuted at the festival in 2010.

‘Metamorphosis’ is taking place on May 5 and 6. You can buy tickets here.