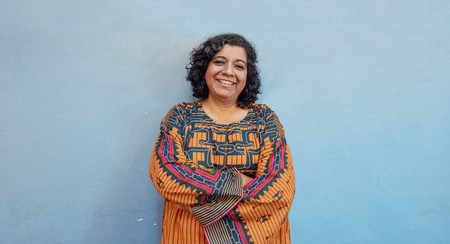 Founder of the female-run and phenomenally successful Darjeeling Express, Asma Khan is a force to be reckoned with. Now the star of a TV show, Khan, a first-generation immigrant, is challenging the male-dominated restaurant business and helping marginalised women find their voice.

Asma Khan sits on the sunny floor of her restaurant Darjeeling Express sipping a cup of masala chai. Although relaxed, she exudes a force of will that can be felt throughout the plant-filled space. Khan opened the restaurant in 2017 and hasn’t looked back since. Her Netflix Chef’s Table episode has just been released and she’s working on two charity initiatives that help support other women. Business is thriving and her cooking is better than ever.

“I’m excited and terrified in equal measure about where my life is heading,” she says. “I’m going to be 50 soon and this is my second innings.”

Khan began cooking after moving to the UK with her husband. While studying for a PhD and raising two children, Khan realised she was homesick for the food she learned to make by her mother’s side during her childhood in India. She saw food as a way of bringing people together and began hosting supper clubs at her house and later at The Sun & 13 Cantons pub in Soho. Khan is thrilled that in her 40s she’s discovered what she believes to be her calling: supporting women through the medium of food. 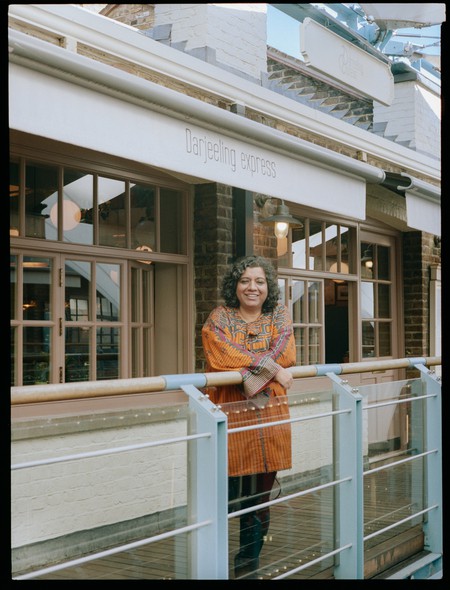 “Initially, every one of the women working in my kitchen were from my supper club days,” she says. “Nannies, cleaners, nurses. If you have Sundays off and don’t know anyone in London, what are you supposed to do? It costs money to do anything. So I would run supper clubs when my husband was travelling. It became this big party, and it felt almost as though we’d gone back to India. Women would gravitate towards us because we were doing what they related to.”

This relaxed, convivial atmosphere permeates her restaurant like the spices with which she cooks. Khan says that her menu is unique, as it’s very limited and freshly made. “When most of us were growing up it was dangerous to put things in the fridge because there were a lot of power cuts, so refrigeration, freezing stuff, these are alien concepts for us because we never watched our mums doing it.”

While her heritage plays a large part in how Darjeeling Express operates, it’s the female energy in her kitchen that really makes the difference. “When I see how other kitchens work, especially all-male kitchens, I often think that they’re toxic environments because there’s so much anger. All of us learned to cook from our mothers and grandmothers. You’re a child, you stand there and listen and watch. Females don’t cook as an ego trip, but because it gives us a lot of pleasure.”

This attitude is uncommon in the food industry, especially in restaurant kitchens, but Khan believes the problem lies with the long hours and volatile atmospheres. “This is unacceptable,” says Khan. “We get women leaving saying, ‘I’ve peeled the potatoes, I’ve chopped the onions, I’m leaving to feed my children dinner now.’ And later in the day, another woman will come in after she’s put her kids to bed to work until the restaurant closes,” she says. “How is this so hard for other kitchens to manage? For the women who work in our kitchen, it’s a calming, grounding space. It allows everyone to feel valued, honoured and respected.” Accordingly, Darjeeling Express is an egalitarian workplace: everyone is paid the London Living Wage, Khan included, regardless of their role.

She now feels that it’s her mission to empower disadvantaged women, both in London and India, and her Chef’s Table episode shows the team working together and overcoming challenges. “The women I work with have gained an enormous amount of respect both from their families and themselves. I would not have gone on this journey of Darjeeling Express and everything else that I’ve managed to do without these women. I stand on the shoulders of those women who have stood by me and believed in my dreams. Chef’s Table reflects their journey as well as mine.”

Khan’s determination is breathtaking. “I want to use this moment on stage to talk about women and give silent women a voice. They live their entire life and go to their graves thinking they’re unskilled – but I know they’re not unskilled, because every dish they cook is as beautiful and unique as their fingertips. She has the right to be recognised that she’s not just a non-English-speaking ethnic minority immigrant. If you live in this city and contribute and feed people, you are a Londoner.

“Too many women who’ve made it turn back and close the door behind them,” she continues. “My power comes from how many women I’ve lifted up and empowered. I want women to understand that your power is not your dress size, it’s not your social media following or praise from some man. Your power comes from when you’ve helped another woman break her shackles.”