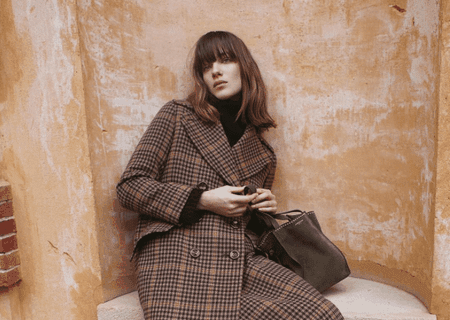 J&M Davidson is steeped in a beautiful history surrounding a couple’s love for one another, and it captures understated luxury in all senses of the word. Designs are timeless, materials are premium and the approach that they take to marketing the label displays a confidence in the quality of product. They put customer loyalty ahead of media trends and fads. Take a look at the evolution of J&M Davidson and the mark that its made on the British fashion industry.

Sometimes business partnerships are exactly that, but every now and then you come across two people who have combined their love for one another and their shared passions to create a brand, and that’s something truly special.

John and Monique Davidson (no points for working out how their brand got its name) have been married for over 40 years, and they launched their eponymous label in 1984. Inspired by the places that they visit and the things that they pick up along the way, what started as a belts-only accessories line (initially inspired by a studded dog collar) now spans handbags, wallets and, most recently, a ready-to-wear line which launched in 1994.

The first days of J&M started at home in Chiswick where the couple worked around their kitchen table and made business decisions in a typically informal setting. In response to the initial success, the creatives added bags to their offering and presented to the likes of Barneys, Saks Fifth Avenue and Bergdorf Goodman. Reps of which visited their home-cum-workspace to view the collections. Each piece was crafted in Manchester – the U.K.’s then-hub of leather crafts – before moving to Andalusia in Spain where it still remains today.

When the ready-to-wear element of the label evolved in 1994, it seemed like a natural progression for the label. Designs mimic the style perfected by Monique – chic and simplistic with a focus on silhouette and quality of fabrication. It was here that the ‘coatigan’ first became a wardrobe staple, a fact not widely known (but that just goes to show how little the founders are taken by flaunting their brand).

Now, J&M Davidson has stores both in the U.K. and in Japan, where they’ve garnered a loyal following of consumers looking to buy into the classic, elegant sensibility of the collections.

In 2015, the London store moved from Notting Hill to Mayfair, specifically Mount Street. A departure from its West London roots but a move in line with its global expansion (it’s stocked on the likes of Net-A-Porter and Farfetch); the studio continues to stay on Golbourne Road where it was initially based.

The J&M Davidson store can be found at 104 Mount St, Mayfair, London.