A Brief History of Alexander McQueen: The East End's Most Famous Designer 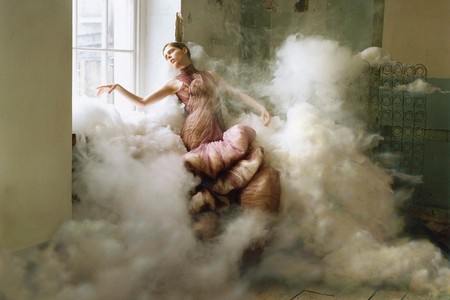 Let’s pay homage to one of the most iconic fashion designers of our generation and celebrate the life and work of Alexander McQueen.

After leaving school at 16, Lee Alexander McQueen worked on the prestigious Savile Row as an apprentice for Anderson and Sheppard and then later for Gieves and Hawkes, where he cut his teeth in suit design before moving into theatrical costume. Here, he mastered the art of pattern cutting—specifically tailoring—which has become synonymous with his namesake label ever since.

His first MA graduate collection, showcased in 1992, made waves in the industry when famed stylist Isabella Blow—who fell in love with the designers’ penchant for fusing ethereal and romantic with a contradictory tough-luxe aesthetic—bought the collection in its entirety. McQueen later dedicated his Spring/Summer 2008 collection to the stylist after her death in 2007. The overall theme of the season celebrated the intricacy of feathers and featured a brightly-coloured, neon bird positioned behind the models as they walked the runway. This is just a small example of McQueen’s limitless creativity; some of his most memorable runway moments include a live spray-paint installation whereby a model stood on a revolving platform whilst coloured paint was applied to her dress, a life-sized chessboard, and most recently, iconic 10-inch Armadillo heels.

McQueen’s stint at Givenchy (1996-2001) allowed for continued creative expression, this time drawing from French haute couture instead of the traditional British heritage. He served as chief designer whilst also working on his own line collections and famously pushed runway boundaries with his controversial ideas, for example, sending Aimee Mullins, a Paralympic athlete, down the runway on wooden legs with intricate carvings. He is a four-time awardee of the British Fashion Council British Designer of the Year, and his catwalk presentations were the most hotly anticipated events on the Fashion Week calendar season after season.

In 2000, the Gucci group bought a 51% stake in Alexander McQueen. Soon after, the designer left his position at Givenchy to focus solely on expanding his business. The label grew from strength to strength, with stores opening worldwide, in cities including L.A. and Beirut.

In the same year, Alexander McQueen appointed Sarah Burton as head of design for womenswear. After McQueen’s unexplained and unexpected death in 2010, Burton was promoted to creative director across the board. In 2011, McQueen’s contributions to fashion were honoured at the Metropolitan Museum of Art in New York City. Later, the Victoria and Albert Museum in London also paid homage with a showcase entitled “Savage Beauty,” which included many of his unforgettable creations.

Now, as Burton continues to head up the fashion house, she takes the label in both new directions (having famously designed the Duchess of Cambridge’s wedding dress in 2012), as well as some that stay true to its founder’s established aesthetic. There’s an unexpected sharpness to the Autumn/Winter 2017 womenswear collection, which features shearling silhouettes and structured shoulders balanced with cinched waists that result in a look that is unmistakably McQueen.