The Battle Of Cable Street: A Brief History

A section of the mural to the Battle of Cable Street, designed by Dave Binnington Savage in 1979 | © Matt Buck/Flickr
October 4th marks the 80th anniversary of the Battle of Cable Street, the infamous but triumphant day in British history in which a 300,000 strong army of Londoners made up of Jews, Labour members, communists, anarchists, trade unionists, and Irish Catholics forced a procession of the British Union of Fascists off their streets.

In May 1936, Sir Oswald Mosley — Baronet, a prominent politician, and high-society figure — resigned from his ministerial position in the Labour Party. After founding the short-lived New Party, he would go on to form the authoritarian, nationalist British Union of Fascists (BUF) in 1932, following a visit to Mussolini’s Italy.

The party initially proved popular but lost much of its support following a spate of high-profile violence. By 1936, Mosley was focussing much of his energy on London’s East End, exploiting anti-Semitism in an area short on jobs and housing for political gain —  with 60,000 Jews, it was home to Britain’s largest Jewish population. In October of that year, he organised a march through the East End, leading a procession of British Blackshirts.

The procession was given police protection to guard against any disruption by anti-fascist protesters, while Jews were warned to stay away by The Jewish Chronicle and the Jewish Board of Deputies. Nobody was prepared for the massive show of resistance that followed, now remembered as one of the most significant non-sectarian, anti-racist demonstrations in British history. 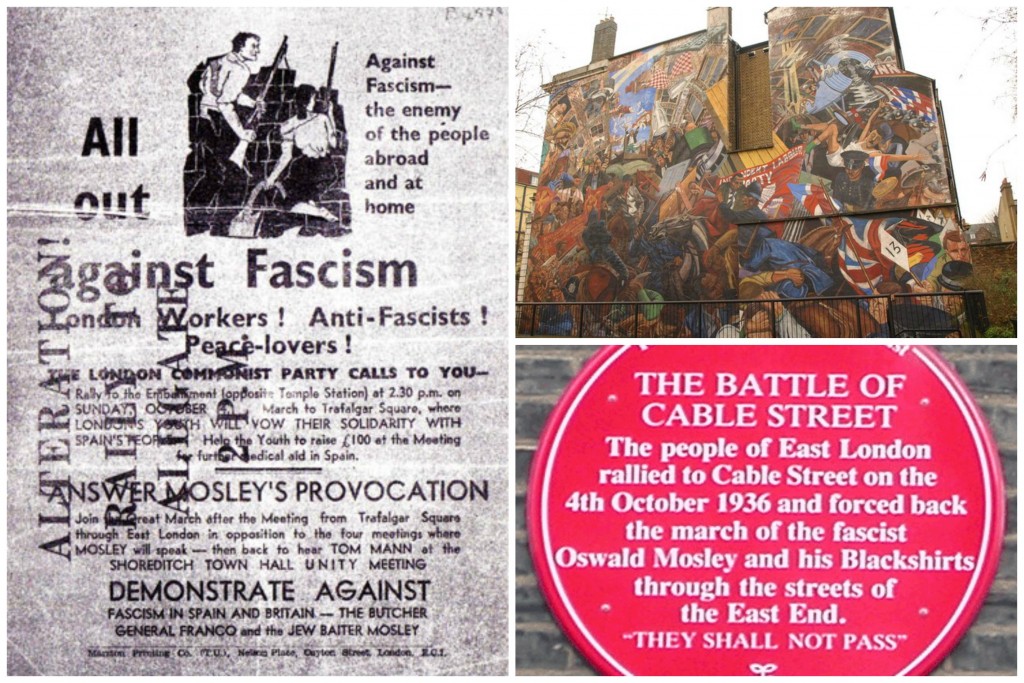 East Enders flooded onto the streets, building makeshift barricades out of mattresses, overturned lorries, and bits of timber. When the police and fascists arrived, they were beaten back with sticks, chair legs and rocks, while children hurled marbles, and women dropped chamber pots onto their heads from windows above. The protesters chanted the slogan ‘No pasaran’, or ‘They shall not pass’ — inspired by the Spanish Civil War’s anti-fascist forces (not Gandalf).

After a mole revealed that the police chief had recommended Cable Street to Mosely as an entryway into the East End, the anti-fascists rushed to erect more barricades. It was here that Mosley was eventually forced to concede the march to prevent further violence. The fascists were dispersed, and a united East End celebrated its victory.

Though the BUF would later lead other marches through the East End, the Battle of Cable Street was immortalised as a powerful symbol against the rising tides of European fascism.