Iconic Fashion Designers That Have Graduated From Central Saint Martins 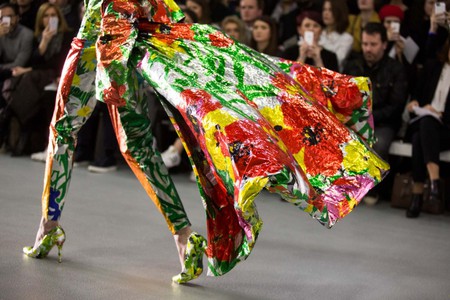 Since the 1980s, London‘s Central Saint Martins has developed a reputation as one of the world’s best fashion schools. Every year, London Fashion Week is filled with CSM graduates (they were involved in almost half the brands that exhibited in 2011), and the school is the only one given its own show each year. CSM is credited with an anti-establishment approach to training, which has helped to nurture some of fashion’s most prominent free-thinking and radical designers. Below is an introduction to just a small selection of the extraordinary collection of designers CSM has produced.

She may have inherited a famous name, but Stella McCartney was not about to spend her life in her father’s shadow. After studying Fashion Design at CSM in the early ’90s, her 1995 graduate collection at London Fashion Week made headlines after selling out entirely — with a helping hand from model friends Kate Moss and Naomi Campbell — and she was appointed creative director of Chloé in 1997. While her creations for Chloé were normally romantic in style, McCartney’s designs typically mix masculine and feminine styles, with sharp tailoring and a focus on wearability. She is most noteworthy for her staunch ethical and vegan approach to fashion; a supporter of PETA, she refuses to work with leather or fur. In 2012, she designed the official Team GB kit for the London Olympics, becoming the first ever leading fashion designer to design an entire Olympic Team’s kit, following on from her long-time collaboration with Adidas.

British/Turkish Cypriot designer Hussein Chalayan studied Fashion Design at CSM, graduating in 1993; his graduate collection (which featured clothes that had been buried and then exhumed, alluding to the process of life, death, and decay) elicited excitement, and was borrowed by the London boutique Browns, who exhibited it in their window display. His designs are known for incorporating elements of science, technology, and architecture, with his multimedia shows sometimes considered as performance installations rather than fashion. His shows typically involve sophisticated narratives, such as a poignant focus on a desire for ‘portability’ in the possessions of displaced people. Some of his most well-known designs include the ‘coffee table dress‘ (pictured), the ‘Airmail’ jacket worn by Bjork on her Post album, and his LED dress, which emitted laser beams from behind thousands of Swarovski crystals. Chalayan won ‘British Designer of the Year’ in both 1999 and 2000, and was awarded an MBE in 2006.

During his tragically short career, the late Alexander McQueen was awarded the title of British Designer of the Year four times. He originally applied to be a pattern cutter tutor at CSM after interning on Savile Row, but was persuaded by the head of the Master’s course to enrol as a student, given the strength of his portfolio. His controversial bumsters — low-slung, bum cleavage-exposing trousers — put him on the map and earned him a reputation as l’enfant terrible, while his unconventional, extravagant and dramatic shows and silhouettes kept him there. McQueen created David Bowie’s wardrobe for his 1996 tour, and designed Bjork’s Homogenic album cover. One of the most iconic moments came when amputee Aimee Mullins opened his 1999 show wearing a pair of carved, wooden prosthetics designed by McQueen — confronting what was a huge taboo in fashion at the time. Savage Beauty, a 2015 exhibition celebrating the creativity and innovation of McQueen, became the V&A’s most visited exhibition ever, having been opened throughout the night for the first time in its history to accommodate the demand.

#artoftheday : This. Feathers coat (painted gold) and white silk embroidered skirt; A/W 2010-11 by #alexandermcqueen . I saw this masterpiece at the 'Savage Beauty' exhibit @ The Met in 2011. This was one of the last dresses he designed. It showed in March 2010 in Paris fashion week, one month after his death. This was one of the best exhibits I've ever been to. Design after design…kept hitting my soul. Fashion is art. #McQueen was a true artist. Genius. Master.🙏🏽💀#art #artist #fashion #nyc #themet #genius #metropolitanmuseumofart #inspiration #legacy #dowhatyoulove #followyourheart #savagebeauty

When John Galliano exhibited his French Revolution-inspired collection upon graduating from CSM with a degree in Fashion Design in 1984, it was immediately snapped up in whole by Browns of London. The success allowed him to set up his own label just one year later. Though he was immensely talented, Galliano didn’t have a head for business and struggled, but in 1994 he was appointed designer at Givenchy after being championed by Vogue US editor Anna Wintour, thus becoming the first Brit to head a French haute couture fashion house; he moved to Dior two years later. Aside from creating some of fashion’s most well known collections — which play on theatrical flair, exaggerated femininity, seductive romance, fantasy, and escapism — Galliano was known for his final bow costumes, which almost upstaged his own collections. However, in 2011 Galliano was caught on film giving an anti semitic-rant and praising Hitler, momentarily destroying his career. Fashion is an industry full of second chances, however, and after a hiatus out of the spotlight, the designer has now moved to head up the creative direction of Maison Margiela. 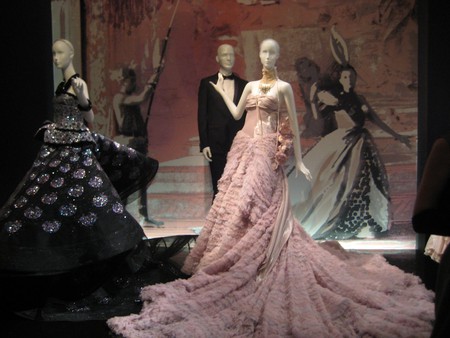 Ballgowns by Galliano for Dior as exhibited in Moscow, 2011 | ©Shakko/Wikicommons

Another British designer known for her ethical business stance, Katharine Hamnett’s designs are perhaps the most iconic of all. She is most known for her oversized, political slogan t-shirts. After studying Fashion at CSM, she set up her own label and began printing slogans onto plain white t-shirts in the early ’80s. Members of Wham and Queen quickly began wearing them in their videos, and Hamnett famously wore one emblazoned with the message ‘58% don’t want Pershing’ at a LFW reception with Margaret Thatcher, hijacking it for an anti-Cold War protest. Her most recognised slogan designs today include ‘NHS Not Trident’, ‘Choose Life’ and, recently, ‘Don’t Shoot’ in support of Black Lives Matter. She is also well known for her work in denim, pioneering stone-washing and stretch denim, and power dressing (spearheading the return to tailoring and the military look), and is considered to be one of the most imitated designers in the world.

To most of us, Sarah Burton’s standout fashion moment has to be the wedding dress she designed for Kate Middleton, which spawned a myriad of copycats around the world. While studying Print Fashion at CSM, Burton’s tutor suggested she intern for Alexander McQueen, and she joined the company full-time as his personal assistant upon her 1997 graduation. In 2000, she was appointed Head of Womenswear, and boasted the likes of Michelle Obama, Lady Gaga, and Cate Blanchett among her clients. After McQueen’s death in 2010, Burton was appointed Creative Director; her subsequent work sought to emulate the dramatics of McQueen to a degree, while introducing Burton’s own feminine touch. In 2011, Burton was named Designer of the Year, while a ball gown of hers for Alexander McQueen was selected as Dress of the Year for the same year by the Fashion Museum, Bath. 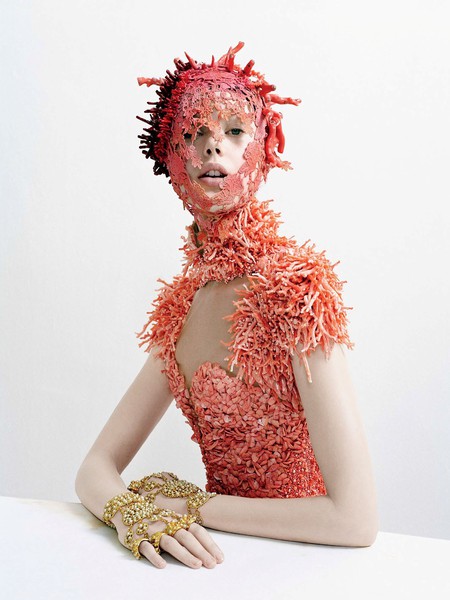 Italian designer Riccardo Tisci graduated from CSM in 1999; just six years later, he was appointed as Creative Director of Givenchy Women’s haute couture and ready-to-wear lines, after his first collection under his own label debuted at Milan Fashion Week in 2004. During his time at Givenchy, Tisci has brought a distinct gothic style to the brand, his designs characterised by a highly stylized romanticism and dark sensuality. Under his direction, Givenchy has achieved a cult celebrity following, with Beyoncé and Madonna as particularly ardent admirers. In 2008, Tisci was also appointed Creative Director of the Men’s ready-to-wear and accessories collections; with an approach that blends streetwear influences with a Parisian feel, and distinct gender-bending pieces, he has gained a cult-following in this arena, too, with the likes of Kanye West and Jay-Z among his prominent champions. His most well-known fashion moment came in 2010, when he cast the first transgender model in a catwalk show — Lea T, his close friend and former assistant.

An iconoclastic designer to the max, Pugh began working as a costume designer for the National Youth Theatre at just 14, and graduated from CSM in 2003, a piece from his graduate collection being selected immediately for the cover of Dazed and Confused. Pugh’s most famous designs are far from what you would call wearable, joining Vivienne Westwood, Alexander McQueen and John Galliano in a tradition of fashion as performance art. He is characterised by an experimental approach to volume and form, which distorts the human body, using materials such as latex, PVC and chain mail to create a spunky, fantastical aesthetic. His final collection at CSM involved balloons placed over his models’ joints and limbs, with inflatable dresses having become his trademark feature. He has designed costumes for Kylie Minogue, Beyoncé, and Lady Gaga, and counts elite figures such as Anna Wintour among his fans.