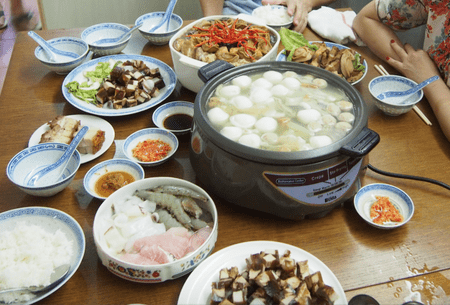 The Chinese Lunar New Year traditionally marks the first day of the new year on the Chinese lunisolar calendar. This calendar is based on phases of the moon as well as the time of the solar year, and therefore starts on a different day each year. Lasting 15 days, the Lunar New Year is the time for visiting relatives, and munching on delicious goodies traditionally only found during the festive period. The eve of New Year’s Day is reserved for reunion dinner with close family, sharing in elaborate dishes specially prepared for the occasion. No matter if you’re popping by a relative’s house or seated down for a proper meal, here are some foods to indulge in this Chinese New Year. 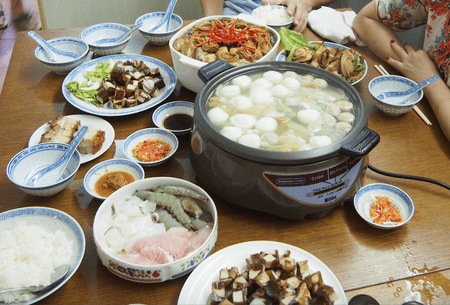 A healthy start to the New Year! Also known as offsetting all the other calorific Chinese New Year foods. Mandarin oranges (瓯柑) are the most abundant fruit during the festive season. They are commonly exchanged with relatives and friends in pairs, as a mark of wishing the other party good fortune and abundance. One reason for this is because the Chinese word for gold (金) and orange (橘) sound alike. Many other Chinese dialects, such as Cantonese and Teochew, mirror synonymous meanings. It is good practice to always have two mandarins ready with you when visiting, lest you’re not keen on receiving red packets from your elders!

Bakkwa or rougan (肉干) is a sweet-and-salty dried, barbecued meat product much like jerky, popular in Southeast Asian countries. It is prepared by air-drying the meat and grilling it over a charcoal flame, imparting a moreish smoky flavour that makes it very hard to resist. Because of advancements in preparation techniques and widespread popularity, chain bakkwa stores sell the product year round. An array of bakkwa items now exist, where there were previously only minced or sliced pork, you can now get chilli pork, honey glazed, cheese, chicken, beef and even mock meat bakkwa. Some stores even sell vacuum-sealed coin-shaped bakkwa for easy consumption. Dangerous. 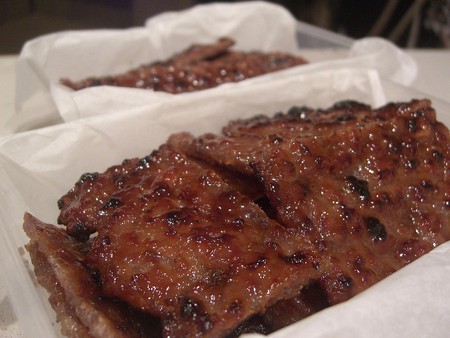 Also known as lo hei, yusheng (余生) literally translates to ‘raw fish’, but is interpreted to mean prosperity or abundance. Most commonly eaten in only Singapore and Malaysia, yusheng usually kicks off the reunion dinner feast. It consists of a variety of shredded vegetables, such as carrots, green radish and white radish, followed by oil, sesame seeds and a sweet plum sauce. Depending on who you ask, the star of the dish would either be the accompanying raw fish (in most cases, salmon sashimi) or crunchy, deep fried pillows of flour: every child’s favourite. Assembled on the dining table, New Year greetings will be said with the addition of each ingredient. After assembly, everyone at the table digs their chopsticks in to toss the giant ‘salad’. The higher you go, the more luck you receive in the coming year! 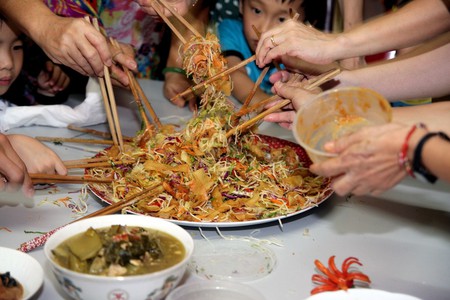 Jau gok (油角) is a classic dumpling dish traditionally served during Chinese New Year. It is typically found in Cantonese cuisine, and originated from Guangdong Province in China. The dumpling wrapper is made from a glutinous rice dough, filled with either sweet or savoury fillings, and deep fried. The shape of these dumplings are reminiscent of gold ingots, so the more the merrier. Other kinds of dumplings, such as jiaozi (饺子), mimic the same idea. 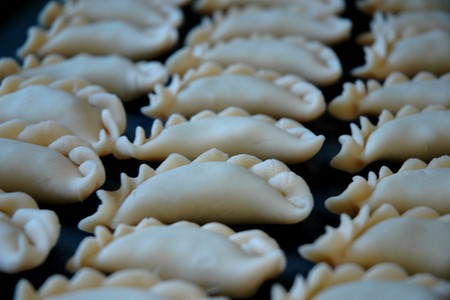 Buddha’s Delight, or luohan zhai (罗汉斋), is a delicious vegetarian option during Chinese New Year feasts. It requires extensive preparation due to its long list of ingredients. Not to be confused with the non-vegetarian poon choi (盆菜), the dish was traditionally meant for Buddhist monks who maintain a vegetarian lifestyle, but is now found everywhere, from Chinese restaurants to households during Chinese New Year. As with many other festive dishes, each entry in the seemingly-endless list of ingredients is ascribed significance. Favourite ingredients are those not commonly found outside the festive period. These include fat choy (发菜), a vegetable that looks like strands of black hair (but is really good!), and arrowhead (慈菇). The large dish is a main feature of reunion dinners, with something everyone will love. 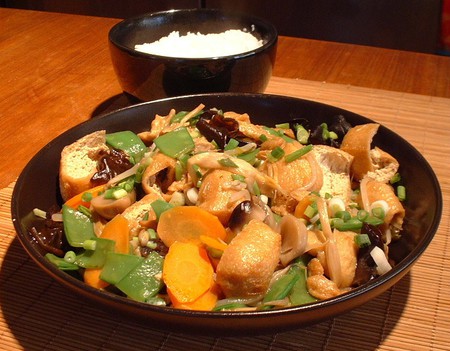 Luohan zhai for one | © FotoosVanRobin / Wikicommons

No reunion dinner can ever be complete without fish. Be it steamed, fried or braised, there must always be a whole fish during reunion dinner. Fish in Chinese is yu (鱼), which sounds a lot like ‘surplus’ (餘) another indication of abundance and prosperity. This has given rise to countless Chinese sayings related to fish and prosperity, many of which are used as Chinese New Year greetings. Many Chinese New Year paraphernalia have pairs of fish on them as well. 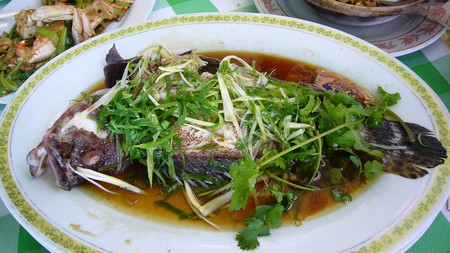 Another Chinese New Year food with many geographical variations, nian gao (年糕) can also be had all year round. It is popular during Chinese New Year due to its symbolic meanings; the Chinese word nian gao means ‘higher year”’, and eating it has the symbolism of raising oneself higher each year. There are both sweet and savoury versions of the food, and it comes in many different shapes and colours. Shanghai-style nian gao is a thick, white, soft rod made with non-glutinous rice, which can be sliced into pieces and stir-fried. Northern nian gao is sweet, and can be steamed or fried. An assortment of glutinous rice foods exist in similar forms all throughout Asia, such as mochi in Japan and tteok in Korea. 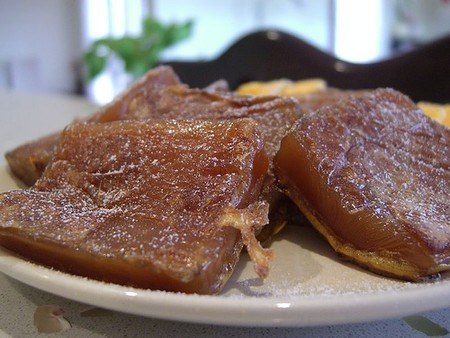 Tangyuan (汤圆) is usually eaten during Yuanxiao Jie (元宵节), or Lantern Festival, but can also be made to round off reunion dinner. The dish consists of balls formed from glutinous rice flour and water, with occasionally a touch of food dye to colour it. It can be made with other flour as well. Each ball may have fillings, which differ regionally across China. Sweet tangyuan from the South can be filled with sweet sesame, peanut or bean paste, or osmanthus flowers and tangerine peels. These are most likely had for dessert, while its northern counterparts can be filled with minced meat or vegetables. It is commonly served in a clear broth. The balls and bowls in which they are served symbolise family togetherness, and they are thus served quite commonly throughout the year.