The 7 Greatest Works By Botticini You Must See 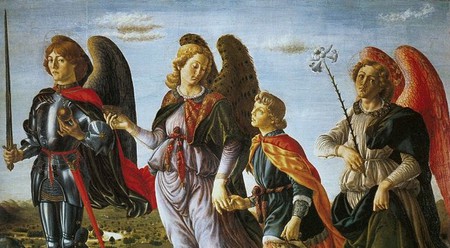 Theologian and poet G.K. Chesterton said: ‘Art is born when the temporary touches the eternal’. One artist who could be said to fuse the artistic, theological and spiritual is 15th century Tuscan Renaissance artist Francesco Botticini. Many of Botticini’s works were painted as altarpieces as he specialised in religious art with fine, elegant chiaroscuro effects that was created to, and still does, inspire reverence and awe. Here are some of his finest works. 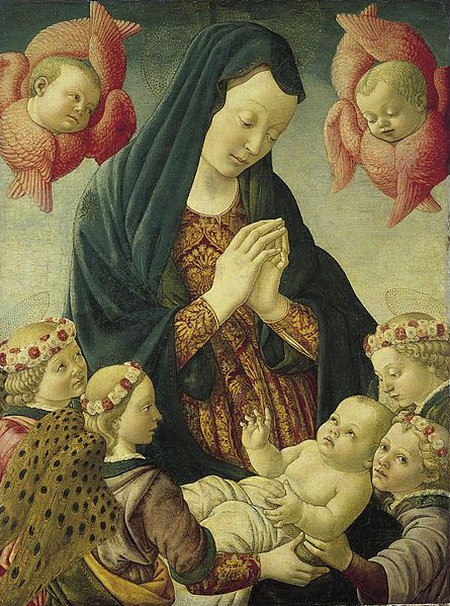 Museum
Facebook
Email
Twitter
Pinterest
Copy link
Share
Map View
Angels played a prominent part in the life of Christ and were present both at his birth and his resurrection. The four angels in this piece may be interpreted as Persons of the Saint Trinity in only one being. In this sense the number four (through the angel quartet) symbolises the family, being considered as another image of the number one. It is also a symbol of the feminine or the woman, for anatomical reasons: the four lips on the body of the woman. They may also represent the four evangelists of the New Testament: Matthew, Mark, Luke and John as well as the four Hebrew letters forming the name of God: YHWH. When most people think of cherubs today they think of baby-like creatures with a bow and arrow (Cupid), with two white wings, who are cute and playful. But here, they seem more formidable. These cherubim are almost like ornamental koi with their four wings. In the Book of Genesis they guarded the Garden of Eden following Adam and Eve’s banishment from the Garden, and are described holding flaming swords. Their wings are the colour of incandescent crimson flame, giving us an allusion to this.
Open In Google Maps
Pasadena, California, USA
Give us feedback

Church
Facebook
Email
Twitter
Pinterest
Copy link
Share
Map View
This painting depicts the famous Augustinian thaumaturgist (performer of miracles), Saint Nicholas of Tolentino. He is depicted in full length wearing a black habit of the Hermits of St. Augustine with a halo round his head. He is holding a lily branch in his right hand and in his left a large red book with a golden starburst close to his breast. The lily represents the angelic purity and innocence which he kept inviolate, the large tome the book of the Augustinian Rule and the golden starburst represents the star that appeared over the city of Tolentino before he died. He is the patron of sick animals, mariners, souls in Purgatory, babies, mothers and the dying. Nicholas is reported to have resurrected over 100 dead children, including several who had drowned together. It is said the devil once beat the living daylights out of him with a stick, which was then displayed for years in his church and in another, Nicholas, a vegetarian, was served a roasted fowl. When he made the sign of the cross, it flew out of the window!
Open In Google Maps
Oxford, United Kingdom
Give us feedback 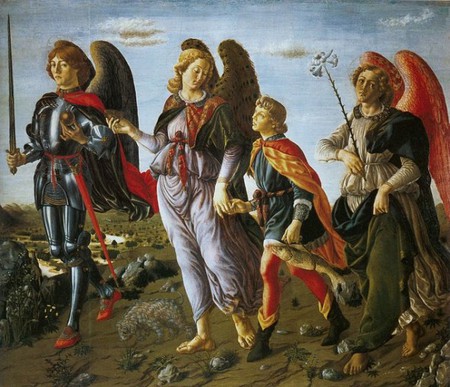 The Three Archangels with Tobias | ©Eugene a / Wikicommons

The Passion narrative, which relates to the events of Christ’s last week on earth, was a constant focus in early Italian Renaissance painting during Botticini’s time. The climax of The Passion is a crucifixion scene like this one, full of painful emotions such as guilt, intense pity, and grief. In this, Botticini supported the work of contemporary theologians, who urged the faithful to identify with Christ in his sufferings so that they might also hope to share his exaltation at resurrection. In the foreground the Virgin Mary and Mary Magdalene swoon piteously but bravely underneath the figure of Christ, who is in between the two thieves mentioned in some of the New Testament gospels. The crucifixion takes place in the daytime, but there is a darkness in the painting, with dark tumultuous clouds thick with apocalyptic wrath bestriding the scene.

The Three Archangels with Tobias

The Three Archangels with Tobias

Botticini visualised one popular story with merchants and travellers from the Book of Tobit in the Old Testament Apocrypha. The story tells of Tobit, a devout Jewish man from Nineveh, who was blind and had fallen on hard times, who sent his son Tobias to collect a debt of ten talents of silver from a family member in the city of Media. Raphael, one of the seven Archangels, accompanied the boy, masquerading as a relative named Azariah. Here Raphael is holding Tobias’s hand very lightly. In his other hand Rapheal holds a jar of the medicinal fish gall to cure old Tobit of his blindness. The boy is holding a fish that Tobias had caught during the journey which would help to rid his future wife of demons. The angel in armour is Saint Michael who is a warrior angel – Archistrategos, or chief commander of all the bodiless powers – holding a sword and orb, symbols of authority. The other angel with red wings is Saint Gabriel holding a lily, a symbol of purity. His red wings represent the Holy Spirit. The white dog represents fidelity.
Galleria Piazzale degli Uffizi 6, Florence 50122, Italy, +39 055 2388651

This painting shows seven angels playing musical instruments. They are surrounded by delicate unfurled scrolls with theological and metaphorical latin inscriptions. This celestial orchestra of angels playing instruments – concentus angelorum – are meant to convey divine harmonies of paradise and the Celestial City itself. They allegorically allude to the glory and exhortation of the 150th psalm to praise God through music and musical instruments. Some of the scrollwork quotes the psalm. Botticini paints his angels in a row, each with a different instrument. One plays the bagpipes, another the trumpet. Others play the tambourine, triangle, lyre, lute and flute. This artwork emphasises that angels communicate in a variety of ways as they interact with God and human beings and some of those ways include music as well as speaking, writing, praying and using telepathy . The Scottish philosopher Thomas Carlyle said that ‘Music is well said to be the speech of angels.’
Museo della Collegiata di Sant’ Andrea, Piazza della Propositura, 3-50053 Empoli, Italy, +39 0571 76284

Museum
Facebook
Email
Twitter
Pinterest
Copy link
Share
Map View
Saint Sebastian was a martyr and a favourite subject of Renaissance painters like Botticini. He is also the only martyr said to have died twice! Sebastian was an early Christian when the religion was still being persecuted by the Roman Empire. He became a Roman soldier in 300 AD and a bodyguard of the Emperor Diocletian. When he was revealed as a secret Christian, he was ordered to convert and his refusal resulted in his execution by firing squad. Sebastian was made to stand in a courtyard before a veritable phalanx of archers who loosed a hail of arrows into their human target. He is depicted here by Botticini at his (first) execution, tied to a post and riddled with arrows. Sebastian was supposedly rescued by another Christian, who nursed him back to health and he began preaching. When discovered, he was beaten to death with clubs in the gladiator’s arena.
Open In Google Maps
New York City, New York, USA
Give us feedback

Assumption of the Virgin

This painting is considered by many to be Botticini’s masterpiece. It shows the Virgin Mary ascending to heaven which is commonly known as the assumption of the virgin. In the centre it shows the disciples gathering around her tomb, which is filled with white lilies. Above, a vast panoramic empyrean dwarfs the Tuscan landscape. It shows three hierarchies and nine orders of angel, each with different characteristics. The figure of Christ receives Mary into the highest circle of Heaven.

The current exhibition: ‘Visions of Paradise: Botticini’s Palmieri Altarpiece’ is on display until the 28th March 2016 at the National Gallery.
By Yasser Kayani

Yasser is a comic performer / stand-up comedian / writer and actor. He currently performs regularly around the UK in comedy sketch groups Chaos Theory and Monkey Wedding.