Amazing Things To See And Do In Fitzrovia

No one really knows where Fitzrovia is located, or what it has to offer. A good mix of homes, businesses, food, and medical centres, Fitzrovia can be labelled as ‘confused’, or in a more positive fashion, an ‘eclectic’ neighbourhood. Fitzrovia is historically bohemian, once home to writers such as Virginia Woolf and inspiration to many more. Here are our list of things to see and do in this charming district. 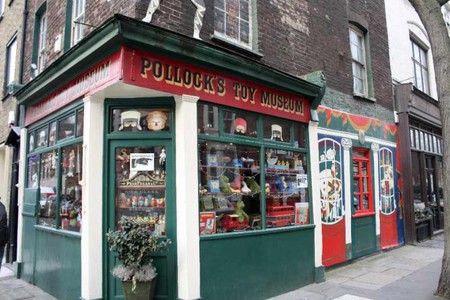 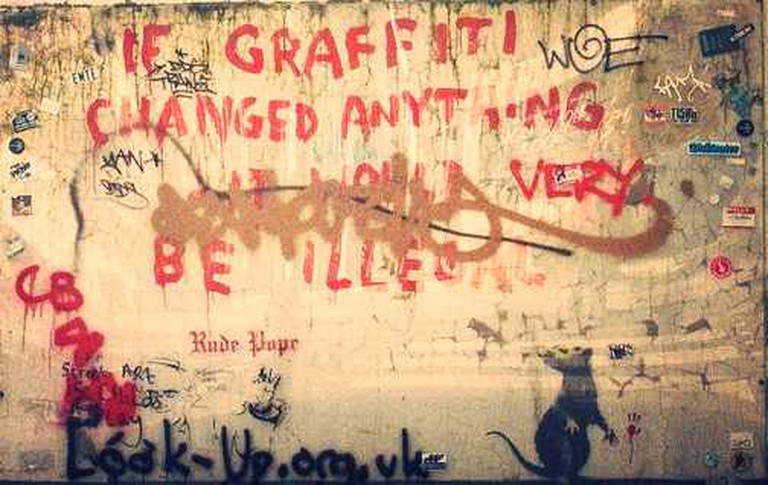 Protected Banksy Artwork | © Julian Osley
Just round the corner of Tottenham Street, Pollock’s Toy Museum is a small, quirky space crammed with the toys of yesteryear. Created in the 1960s, the museum features mainly Victorian toys, such as toy theatres, vintage dolls, and tin soldiers. Navigating the six cosy display rooms and two winding staircases, you get transported back to the past where kids played with their imagination and creativity instead of video games on digital devices. It is £6 for general admission, £5 if you are a student, and they are open from 10 AM-5 PM Monday through Saturday.
Open In Google Maps
1 Scala Street, Bloomsbury, London, England, W1T 2HL, United Kingdom
+442076363452
Visit Website
Give us feedback 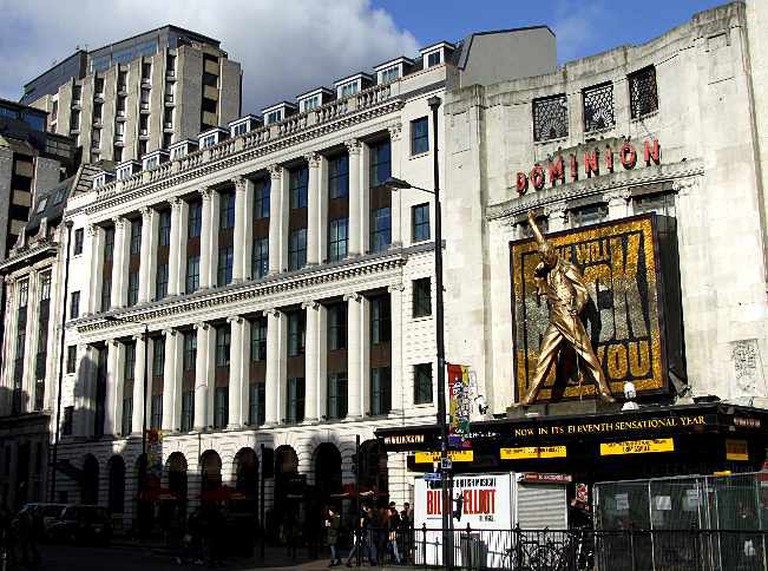 Dominion Theatre | © Petr Brož/ WikiCommons
Street art is everywhere in London, especially in the hipster-heaven that is Shoreditch. Who would have predicted that there would be a piece of art by Bristol’s most famous street artist, Banksy, in Fitzrovia itself? Located at the corner of Clipstone and Cleveland Street, just under the BT Tower, this Banksy piece is a stencilled rat with a message in dripping red paint. A sheet of Perspex now protects it, but you never know when the Westminster Council might remove it, so check it out before it disappears.
Open In Google Maps
London, United Kingdom
Give us feedback 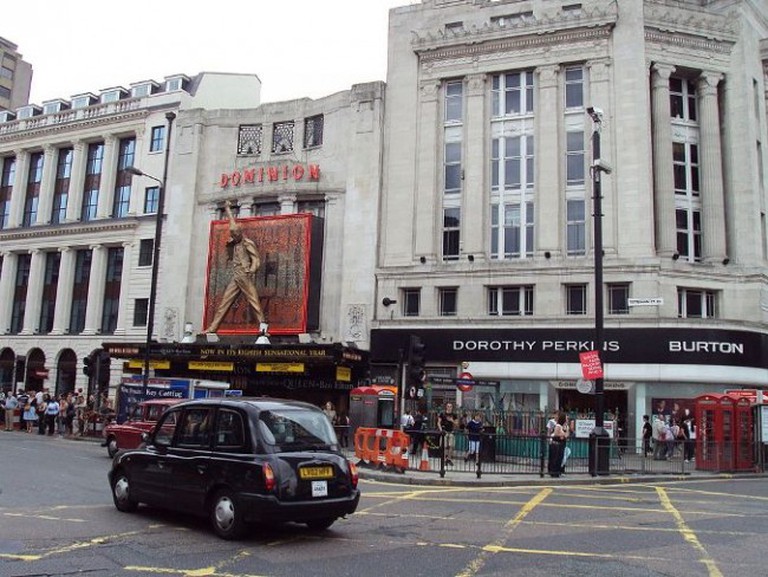 Dominion Theatre | © Rept0n1x/WikiCommons
Opened in 1929, the Dominion Theatre, just outside Tottenham Court Road Station, is currently showing Lord Of The Dance: Dangerous Games, an exciting dance show with mesmerising choreography and talented performers. Elf the Musical, based on the 2003 cinema hit featuring Will Ferrell, is set to open in October 2015. As they all say, no trip to London is complete without a show at one of its finest theatres.
Open In Google Maps
268-269 Tottenham Court Rd, Fitzrovia, London, England, W1T 7AQ, United Kingdom
+442079270900
Visit Website
Give us feedback 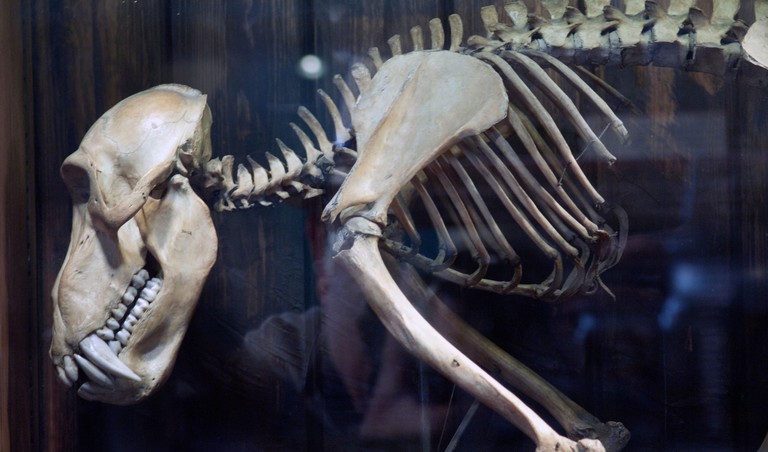 Skeletons of extinct animals are on display at the Grant Museum of Zoology | © dominic dibbs / Alamy Stock Photo
Founded in 1828 as a teaching collection, the Grant Museum of Zoology is home to many fossils and preserved animal specimens, including those that are now endangered or even extinct, such as the Tasmanian tiger and the dodo. This natural history museum might be smaller than the one in Kensington, but it is equally fascinating. The best part is that admission is free.
Open In Google Maps
Rockefeller Building, 21 University Street, Bloomsbury, London, England, WC1E 6DE, United Kingdom
+442031089000
Visit Website
Give us feedback

When it comes to dining with great views, the first few places that come to mind could be the Shard, Heron Tower, or even Oxo Tower along the South Bank. The BT Tower, located in the heart of Fitzrovia, is often only associated with communications, British Telecommunications, and possibly Coldplay, from their song Fix You. Mysteriously enough, it was deemed an official secret, and its 191m of concrete and steel was never marked on any Ordnance Survey Maps. Though ballots for their revolving restaurant has closed, for now, there will be another raffle opening this September for a chance to win tickets to the famed tower for you and three more friends. Check back here come 1 September. 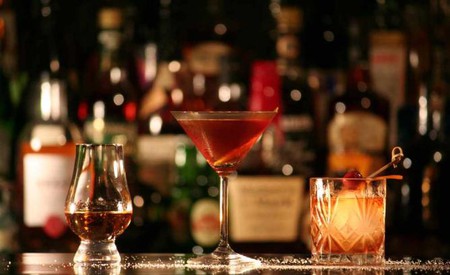 6. Two for £10 cocktails at London Cocktail Club all night on Mondays

To chase the Monday Blues away, it’s two for £10 cocktails all night at all LCC bars. The London Cocktail Club serves up the bee knees, old-fashioned, and even bacon and egg martinis with aplomb. There are many locations throughout London with one of them right along Goodge Street. Filled with those ‘in-the-know’ and merrymakers wanting to make their money worth, the LCC can get pretty crowded so it’d be good to make a reservation. It is quite easy to miss the entrance, so keep your eyes peeled.

Charlotte Street is host to a diverse array of cafes, restaurants, and bars. With so many choices along with a single street, it is a foodie’s haven. There is Gaucho for Argentinian food, Thai Metro for Thai, Wahaca for Mexican, Zizzi’s for Italian, and much more. With so many options, you will be spoilt for choice. Check here for more impeccable dining options in Fitzrovia.