As far as contemporary art goes, few artists reach the heights of stardom to enjoy the benefits of notoriety, let alone recognition. The majority of them hustle during daylight hours working jobs that are sometimes in the art world, sometimes not. Greg Rook, English painter, teacher and father is one of these under the radar players in the hard-to-define and ever-changing art game. Here are five things to know about him. 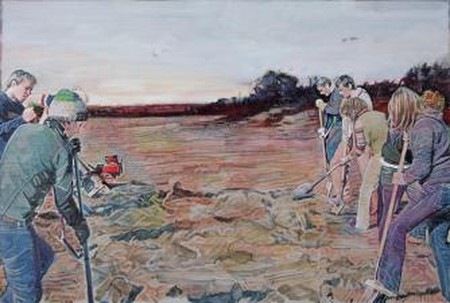 His first paintings were of dead animals

The artist’s paintings frequently feature a rugged aspect of life: farming, manual labor, and survivalist scenes. His early paintings were not much different. These pieces, which Rook refers to as “allegorical still life,” were painted after he graduated from college and started a career. The paintings were “composed of dead birds and animals that were strung up and posed,” Rook said.

He started out in television

After graduating from Oxford with a BA and MA in Philosophy, Politics, and Economics in 1994, Rook tried his hand in television. He worked as a TV documentary film researcher for production firms that aired programs on the BBC. “Working in television, telling other people’s stories… I realized that I wanted to tell my own.” Rook said. “It was whilst making amoral journalistic choices in the development of these documentaries that I turned to painting,” Rook said. It was during this time, he says, that he started to delve into art.

Rook was brought up in London, but spent a significant part of his childhood on the French countryside. This contrast of urban and rural influence plays into the dichotomy that reappears in other areas of his life and art. His work is imaginative, yet undeniably rooted in reality. His mother was an art historian while his father worked as a professor of immunology. Rook described his household as being “an arty, intellectual family. We [were] divided harmoniously between art and science.” This interplay between practicality and self-expression transferred from parents to offspring, as Rook developed to become an artist while his brother became a doctor.

The artist’s imaginative nature and affinity toward literature traces back to an early age, “I spent a lot of my childhood reading and then exploring the surrounding woodland with an iron shod staff I’d have crudely created – imagining myself the hero of countless fantasy novels,” Rook comments. In his formative years, Rook was heavily immersed in the works of noted American authors such as Cormac McCarthy, Kurt Vonnegut, and Chuck Palahniuk. Now, he says, his reading list circulates topics related to his chosen field, mostly about painters and the art world, then and now. Literature seems to have been a significant force in influencing Rook’s work and development as an artist. When speaking on the mediums he was contemplating when starting out as an artist Rook said, “I could have started writing, but the painted image had always resonated with me.”

He makes a lot of collages

Many artists have their own specific rituals that they go through whenever they embark on a new project. Rook has tried different methods. Rook was sidetracked by photography while working on his Masters degree in Fine Art in the early 2000s. “I was interested in taking photographs to use as source material,” Rook said. “But then they inevitably began to seem sufficient as photographs.” Now, he says, the geneses of his new projects are collages. “I accumulate imagery – mostly deliberately sought out, then make dozens of collages from some of which I produce drawings and then paintings,” Rook said. “It took years to remind myself that the paint was perhaps more important than the picture.”