An Introduction To Peter Rabbit Creator Beatrix Potter Through 12 Works 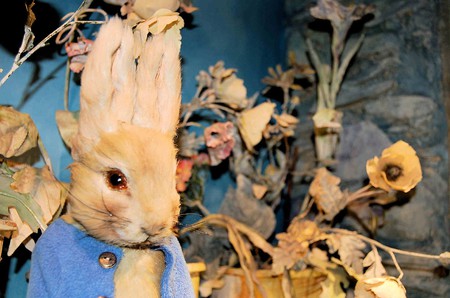 It’s been 150 years since the world gave us Beatrix Potter, one of Britain’s most talented writers as well as an illustrator. Her specialty was bringing farm animals and woodland creatures to life, inspired by living on a farm in the Lake District for the majority of her life. A keen conservationist, she received praise for her watercolours of various fungi but, unsurprisingly, it’s her children’s books that have given her a lasting legacy. Here are the 12 Beatrix Potter books you should know.

The Tale of Peter Rabbit

The most famous of all Beatrix Potter’s books was the first one she published. The Tale of Peter Rabbit was released in 1902 after several publishers initially rejected the story. As in nearly all of Beatrix Potter’s books, Peter Rabbit is an anthropomorphic rabbit sporting a tiny blue jacket and a penchant for getting into mischief. The story follows Peter Rabbit breaking into Mr. McGregor’s vegetable patch despite being expressly warned by his mother to stay away. With 45 million copies sold to date, it’s one of the best-selling books of all time.

The Tale of Squirrel Nutkin

The Tale of Squirrel Nutkin was Potter’s follow up to Peter Rabbit and, after its great success, the story was an overnight hit. Many of Potter’s stories started out as illustrations of animals she would post to children in her family or from her days as a governess, which is exactly how Squirrel Nutkin began. The titular Squirrel sails to Owl Island to ask Owl Brown if he and his squirrel friends can collect nuts on the Island. The Owl concedes to the Squirrels, but when Squirrel Nutkin taunts the owl one time too many, an altercation with Owl Brown leaves Squirrel Nutkin without his tail. 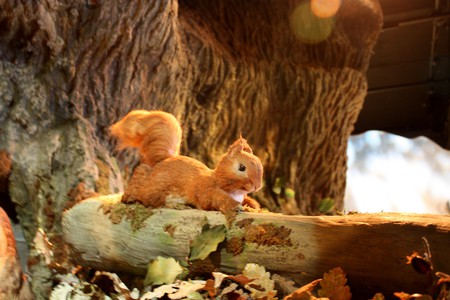 The Tailor of Gloucester

Though the title might make you think otherwise, The Tailor of Gloucester is driven by the cunning and kindness of the animals in the story. Beatrix Potter herself declared this book to be her favourite of all her publications and was inspired by the story of a real-life tailor. After the tailor frees a number of mice trapped under teacups by his cat Simpkins, the cat takes revenge on the tailor by hiding material he needs to finish a waistcoat. When the tailor falls ill and is unable to finish his work, the mice thank the tailor for saving them by finishing the waistcoat themselves. 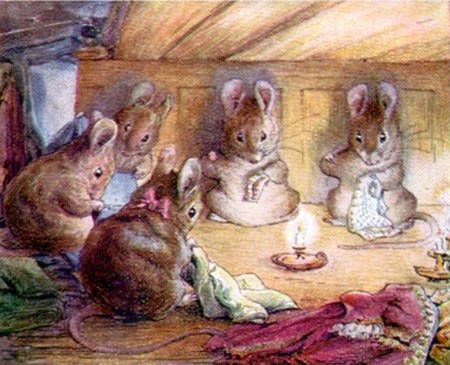 The mice who help the tailor | © WikiCommons

The Tale of Benjamin Bunny 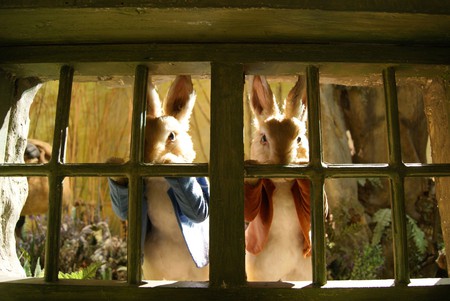 The Tale of Two Bad Mice

The inspiration for The Tale of Two Bad Mice came in part from Potter’s publisher buying a doll’s house for his niece and two mice being caught in one trap in her cousin’s home. The story itself is about two mice who raid a doll’s house looking for food, only to find the dinner plates are made of plastic. In their anger, they smash the plates and destroy the entire interior. The young girl who owns the doll’s house places a policeman doll in front of the house to protect it, which makes the mice feel guilty. Every morning the mice retrieve a tiny dustpan and brush to sweep the house and atone for their crimes.

The Tale of Mrs. Tiggy Winkle

The first time Beatrix Potter had any of her characters converse with the animals on the same level was in The Tale of Mrs. Tiggy Winkle. By this time, Potter was married to her publisher, but it’s believed she wrote the first drafts of the book as early as 1892. When a little girl named Lucie discovers that she is missing three handkerchiefs and a pinafore, she becomes curious at hearing a singing voice down the bottom of a hill. She finds a small door to a small cave where Mrs. Tiggy Winkle, a hedgehog, is washing and ironing Lucie’s handkerchiefs, which she does for other animals to make a living. Later, Lucie falls asleep on the hillside and believes the encounter to be a dream. 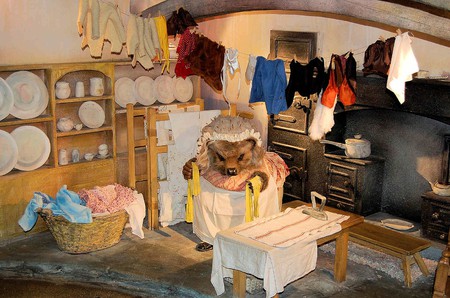 The Tale of Mr. Jeremy Fisher

Beatrix Potter was very fond of frogs and had several as pets when she was a child. The Tale of Mr. Jeremy Fisher follows a frog who decides to go fishing for minnows and plans to serve them to his friends for dinner that night. Unfortunately, Mr. Jeremy Fisher runs into a lot of bad luck. On his lily pad boat, water beetles pinch his toes and rats rummaging in the bushes force him to move to another location. Then, he reels in a stickleback who pricks him on the finger before flying back into the water, with little fishes laughing at the ordeal. Finally, a trout leaps out of the water and catches Mr. Jeremy Fisher in his mouth before deciding he doesn’t taste very nice and spits him back out. The frog then has to rely on his friends to bring dinner. 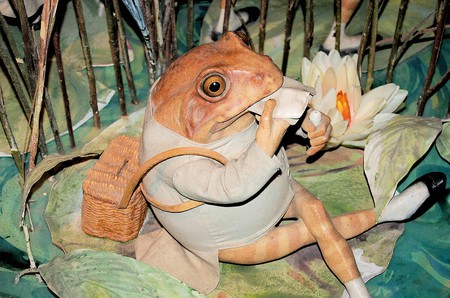 The Tale of Tom Kitten

Like the majority of Beatrix Potter’s stories for children, The Tale of Tom Kitten was written with a lesson in mind for the reader. In the case of this tale, readers are supposed to learn the importance of manners and obedience. A cat invites another cat named Tabitha and her three kittens to a party. Tabitha dresses her kittens nicely for the party, but they immediately stain their clothes by playing in the garden. The mother sends the kittens to bed and does not allow them to attend the party, but instead of learning their lesson, the kittens cause havoc in their bedroom. 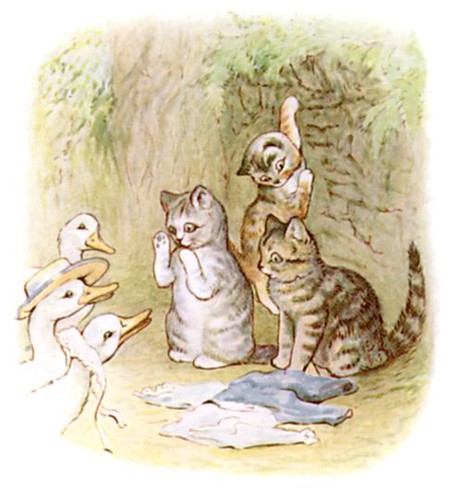 Tom Kitten and his sisters | © WikiCommons

The Tale of Jemima Puddle-Duck

The Puddle-Ducks were featured as supporting characters in some of Potter’s other books, but this was the first time they received their own story. Believing the ducks are unable to hatch their own eggs, the farmer’s wife routinely removes the duck eggs and gives them to the hens to hatch. Jemima Puddle-Duck unsuccessfully tries to hide her eggs and sets off to find a safer place to lay and hatch her own eggs. When a fox tricks her into laying her eggs in his shed, two foxhounds witness the fox’s plans and help Jemima escape. The fox in question is Mr. Tod, who is given his own story a few years later. 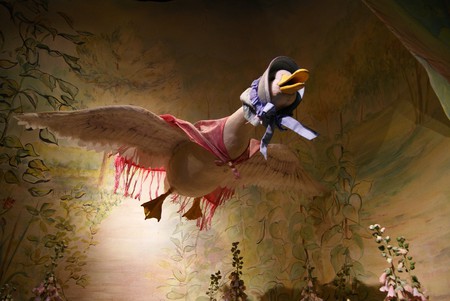 The Tale of Samuel Whiskers or The Roly-Poly Pudding

As Beatrix Potter promised at the end of The Tale of Tom Kitten, the titular cat returns in a different cat story. The kittens are still very disobedient, so their mother locks them in a cupboard but Tom manages to escape. Their house is overrun with rats who plot to spread butter and dough over the kitten and make him into a pudding. Tom Kitten manages to escape, but the ordeal leaves his sisters as excellent rat-catchers, and Tom terrified of any household pests and eventually receives his comeuppance. Like many of her other stories, Beatrix Potter based the character of Samuel Whiskers on her own pet rat Sam, and the interior of the house is based off the design of her own house, Hill Top Farm. 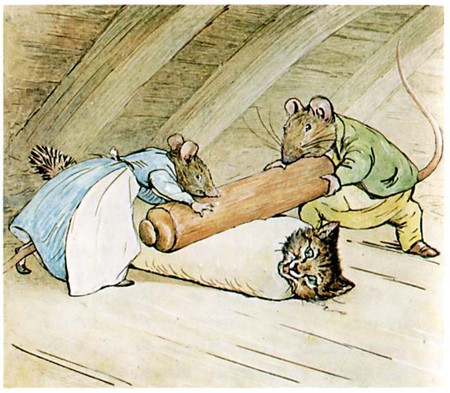 Tom Kitten being made into Roly-Poly Pudding | © WikiCommons

The Tale of the Flopsy Bunnies

Though reluctant to write yet another rabbit story, since they were so popular with children, her publisher persuaded her to write The Tale of the Flopsy Bunnies. The six bunnies in question are the children of Benjamin Bunny and his cousin Flopsy Rabbit. The bunnies, just like their mischievous uncle Peter Rabbit, are partial to raiding Mr. McGregor’s garden for vegetables. When he captures them in an old sack, a woodmouse helps the bunnies escape by filling the sack with rotten vegetables to fool the farmer. Unlike their parents, the flopsy bunnies do not wear human clothes and move just like real life bunnies. 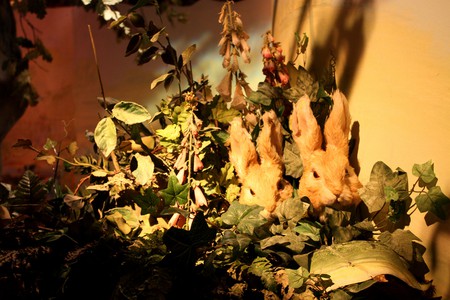 The Tale of Mr. Tod

The Tale of Mr. Tod is known as one of Beatrix Potter’s most complicated stories in terms of plot. A Badger named Tommy Brock and the fox, Mr. Tod, are arch enemies. When Tommy Brock kidnaps the flopsy bunnies, for an unexplained reason he hides them in the oven of Mr. Tod with the intention of eating them. Luckily, Benjamin Bunny and Peter Rabbit follow Tommy Brock and are able to rescue the bunnies. Mr. Tod catches Tommy Brock in his house and is preoccupied in fight when the rabbits steal back the flopsy bunnies. By the time Beatrix Potter wrote The Tale of Mr. Tod, her eyesight was poor and she was tired of writing for children, much less the idea of writing another story featuring the popular rabbits. The tale was one of her last completed works as she spent the last chapter of her life largely rehashing old ideas and narratives rather than creating anything new. 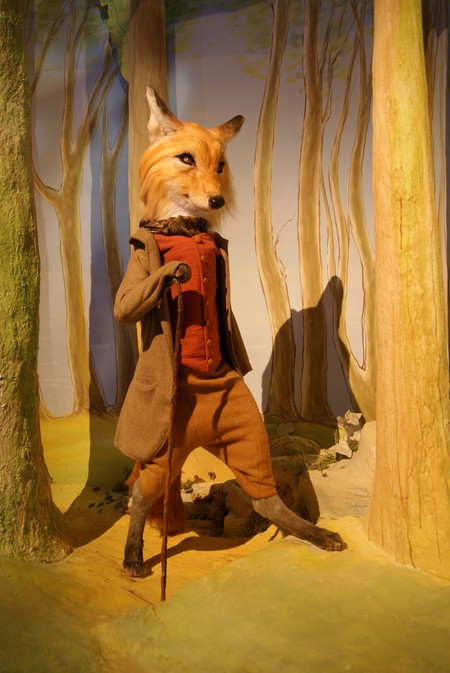 Mr. Tod at the Beatrix Potter museum in Bowness | © Ian Stannard/Flickr
Give us feedback