11 of the Most Instagrammable Restaurant Designs in London 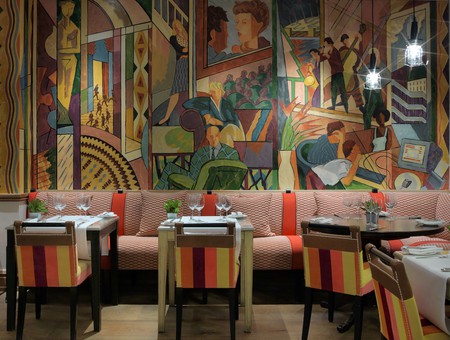 Let’s be honest, the Instagram craze has gone way beyond taking a simple snapshot of our plates – restaurants are now wooing customers with not just #Instafood, but also sumptuous and stylish decors that deliver, too. Here are some of London’s most Instaworthy restaurant interiors that will have you drooling for a different reason…

Probably the most Instagrammed hotel this year in the UK, The Ned, designed by the infallible Soho House Group, has swiftly become a favourite target for Instagrammers due to the swank and splendour of its nine – yes, nine – restaurants. Names after Edwin ‘Ned’ Lutyens who designed the original Midland Bank building, The Ned pays homage to its Art Deco heritage and cocktail-era glamour – Cecconi’s and Mille’s Lounge are prime spots for a shot.

The Duck and Rice, Soho

This venture from restaurateur Alan Yau is an intriguing fusion of the British pub and Chinese culture. The interior designed by Turkish firm Autoban is a clever mix of OTT decoration reminiscent of traditional Victorian pubs put with an Asian twist. Stained glass and copper beer tanks are a nod to the classic pub, while floor-to-ceiling blue and white glazed tiles reference China’s pottery traditions. It’s definitely not your average local boozer – this place has a sense of occasion and a buzz like no ordinary pub.

Time and time again, this gorgeous powder-pink restaurant will crop up on people’s Instagram feed. Already an iconic space, this interior by playful designer India Mahdavi was popular before ‘Millennial Pink’ was even a thing. The Gallery is adorned with 239 witty artworks by British artist David Shrigley, which perfectly match the sense of fun in this boudoir-style place.

Tucked away in the imposing converted Town Hall Hotel you’ll find this unassuming 30-cover restaurant. The Corner Room is informal, but delivers outstanding plates of seasonal food. It taps into the trend for utilitarian design with a myriad of vintage industrial light fittings, wooden panelling and metro tiles, echoing the building’s past with a contemporary twist.

This Sloaney hotspot has become a popular place for the Chelsea folk and visitors alike, with the gorgeous garden terrace being where you want to nab a seat for a spot of alfresco dining during the summer months. Unashamedly fussy, whether it’s the foliage outside or the array of botanical-themed prints and paraphernalia inside, there’s definitely something for every Instagrammer here.

The interior is as grand as the ceilings are tall in this decadent dining space, courtesy of Michelin-starred chef Jason Atherton and hotelier Ian Schrager. Elegance exudes from this restaurant, but don’t be put off by the grandeur – the atmosphere is still pretty laid back at Berners Tavern and the food isn’t all ‘foam’ and ‘dust’; this is proper grub, just served very well. While it has the appearance of old finery, take a look around and you’ll start to notice witty nuances – the salon-style pictures in ornate frames on the wall are actually all contemporary photographs, for example.

You’ll probably want to come here just for the novelty of the ‘Press for Champagne’ button that comes with every table, but the lavish interior won’t disappoint either. Somewhere between sitting in a first-class Edwardian dining cart and a Faberge egg, it’s an experience like no other – even the pies have Champagne in them, obviously.

A slice of paradise in the heart of East London, this totally on-trend cafe hits the spot with its Miami-inspired ice-cream pastels and tropical prints and plants. While this is more of a café than restaurant per se, you won’t be disappointed with the food, which dishes up exceptionally good veggie and healthy options that will leave you feeling satisfied and guilt-free.

This fabulous building has bags of character thanks to its intriguing history – Edward Gruning designed the purpose-built gym back in 1865 and it was funded entirely by London’s German community – it even hosted the indoor games at London’s first-ever Olympic Games in 1866. Come for the high ceilings, high society and high-brow cooking; whether you’re sat in the Grand Café or the sleek first-floor restaurant, there will be a feast for the eyes.

For old-school charm, you can’t get any more British than ‘London’s Oldest Restaurant’, Rules. This classic institution, which was established in 1798, lives up to the hype with even poet Sir John Betjeman declaring the ground-floor interior as ‘unique and irreplaceable, and part of literary and theatrical London.’ The sumptuous interior of rich, red velvet upholstery, polished mahogany booths and historical pictures and prints will prove as irresistible as the delicious traditional British food.

Part of the super-stylish Firmdale Hotel Group, this Kit Kemp-designed interior is a perfect example of how to artfully clash vivid colour and bold patterns together. The mural is the star of the show in this Oscar Bar & Restaurant at the Charlotte Street Hotel – be sure to book a table in this spot for the perfect Instagram backdrop.

Looking for other foodie inspiration in London? Check out these Instagrammable dishes to try on your travels or these London restaurants with jaw-dropping views.