9 Things That Tourists Should Never Do in London 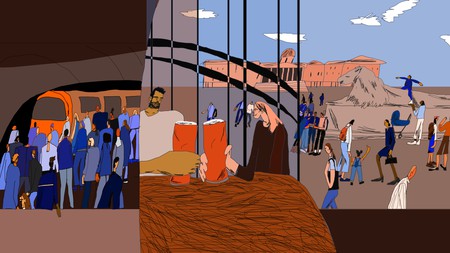 Mind the gap. Stand on the right. London is a city that runs on rules, and while most are second nature to locals, it takes a little more time for visitors to adapt to protocol. Here’s a quick cheat sheet to help you avoid social slip ups on the tube, around the city and – of course – in the pub.

When it comes to the tube, don’t…

If possible, try to avoid getting the tube between 7:30 and 9:30am, and 5:00 and 7:00pm, especially if you have a lot of luggage. During this time, tube stations can get congested and trains are packed with weary Londoners making their way to and from work. If you do find yourself swept up in the rush hour commute, however, you’ll get a great insight into just how far Brits will go to avoid eye contact despite extreme physical proximity.

Stand on the left

If there’s one golden rule in London, this is it. Do not, under any circumstances, stand on the left of an escalator in the London Underground. The left is for walking. The right is for standing. Failure to adhere to this will immediately single you out as a tourist and earn you plenty of disapproving tuts.

Though buying a travelcard might seem like the most cost-effective option for a day of sightseeing, using an Oyster card will save you more cash (not to mention help you fit in with the locals). These pay-as-you-go smart cards have a daily price cap which often works out less than the cost of a one day travelcard. The same fares apply if you have a contactless payment card. Whatever you do, never opt for a single one-way ticket, unless you want to pay double the price.

Get the tube when it’s quicker to walk

London’s tube system is so extensive that tourists and locals alike often forget that it isn’t always the most efficient way of getting around. In central London, walking between tube stops is often much faster. According to Transport for London’s Walking Tube Map, it takes just four minutes to walk between Leicester Square to Covent Garden stations, which is probably half the time it takes to climb the notorious 193-step stairway in Covent Garden station.

To get the best out of your trip, don’t…

Leave without having a pint

Pubs are at the centre of social life in the UK, and the capital has one on virtually every corner. For a quintessentially British experience, join the after-work crowds and “get a round in” for you and your group. When asking for a pint, make sure you specify the lager or ale you’d like – don’t just ask for “beer” – and keep in mind that tipping isn’t expected.

Sightseeing needn’t break the bank. Instead of going to overpriced, overcrowded attractions like Madame Tussauds and the London Dungeons, pay a visit to London’s unrivalled collection of free museums and galleries. You can see the works of Da Vinci and Van Gogh at the National Gallery, or the famous giant dinosaur skeletons at the Natural History Museum, without paying a penny. It pays to be thrifty in other areas, too; if you’re thinking about buying a ticket for the London Eye or ascending the Shard, we recommend booking a visit to the Sky Garden instead, a free alternative with just as impressive views of the London skyline.

With London boasting 85 Michelin stars and a choice of cuisine from almost every nationality in the world, there’s no excuse to be eating at an Angus Steakhouse, despite their propensity to pop up in every touristy spot in town. Explore the city’s diverse dining options and make a beeline for the restaurants in central London that aren’t overpriced chain restaurants.

Whether it’s stopping to snap a photo on Oxford Street or crowding in front of a tube map, the quickest way to enrage a Londoner is to block the steady flow of foot traffic that keeps the city moving. If you need to pause to get your bearings, make sure you’re not in anyone’s way.

Strike up an unwanted conversation

British people are generally quite reserved, and talking to someone when they’re minding their business can be seen as breaking social etiquette. Pick your moments wisely; someone reading on the tube probably doesn’t want to chat, but someone enjoying a pint in the pub might be a little friendlier.

This article is an updated version of a story created by Josephine Mizen.