10 Modern Retellings of Classical Lore You Should Explore

With a fantastic range of monsters, villains, damsels, gods and mortals, the folklore of the Classical world has been much studied. The revival of the Classics in Renaissance Europe led to an incredible upsurge of Helleno-centric thought, with art and literature following suit. This fascination continues today, with writers extracting latent themes. We showcase ten examples of literary works which have used the politics and social mores of their times to infuse the classical works with new life.

Agatha Christie | The Labours of Hercules (1947)

A short story collection starring Christie’s infamous detective Hercule Poirot, the collection is a light and exuberant tribute to Poirot’s namesake, Hercules. Here, her vertically-challenged detective indulges in the egomaniacal whim of retiring once he has taken on twelve cases that are comparable to the twelve his namesake underwent as penance. Though the links between the tasks themselves and the cases are occasionally tenuous (as with the first case, The Nemean Lion), there are some truly clever twists within (with notable favourites being The Cretan Bull and The Stymphalean Birds), which have a surprisingly modern attitude that warns against prejudices, rapaciousness, and revenge. Its quirkiness and its clever adaption of the ancient into the modern make it exciting and well worth reading. 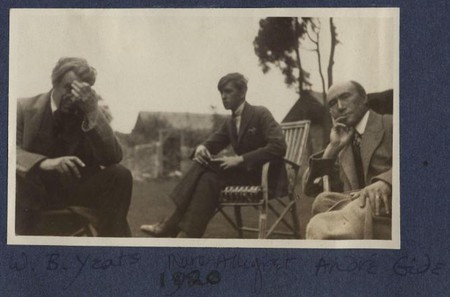 Though two different stories (Oedipus is a play, whereas Theseus is a novel), the themes explored overlap so much that editors often pair the two. Enduring proof of Gide’s interest in the Classical world, these two works are accomplished pieces that experiment with different styles and concepts to create fiction that is unsettling, yet powerful. The explicitly incestuous tone of the Oedipus, for example, with the two sons of Oedipus discussing the possibilities of marriage to their sisters is uncomfortable yet mandatory reading. Furthermore, the playfulness and hedonism of Theseus (in his first person narrative) almost makes his abandoning of Ariadne justifiable, as it is told with a nonchalance and quasi-defiance that is both repulsive and slightly admirable. Daring in its vision and execution, Gide has crafted two masterpieces that certainly deserve continued reading. 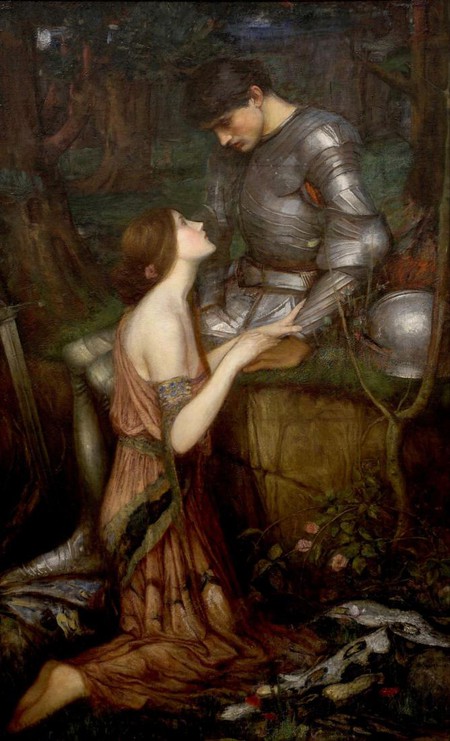 A narrative poem of great poeticism and beauty, Lamia draws inspiration from the legend of the monstrous Lamia, Libyan Queen and previous mistress of Zeus. Though completely different in the sense that it tells of the doomed love between Lycius, a Corinthian youth and a Lamia, released from a serpent form by the God Hermes, it has had a profound influence on future poets, with contemporaries such as Shelley praising it and Keat’s unrecognised talent. It has significantly shaped the Lamia mythology itself, as Keats’ portrayal of a Lamia in serpent form has resulted in the subsequent interpretations (both in art and literature) including allusions to the Lamiae’s serpent form, whereas that had not previously been an integral part of the lore surrounding the Lamiae. 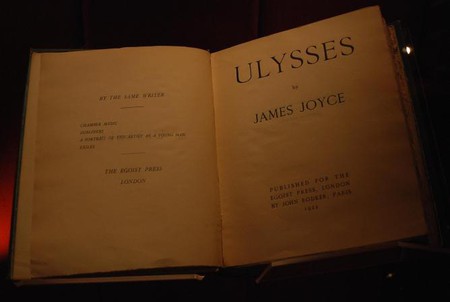 Both a tribute to Homer’s Odyssey and a bold foray into modernism, Ulysses became one of the most influential works of the 20th century. With the somewhat lackadaisical Leopold Bloom as the titular ‘Ulysses’ and Molly Bloom as his ironically lusty and adulterous ‘Penelope’, Ulysses traces all the activities, experiences, and thought processes of the itinerant Bloom, all of which takes place in one day (16th June 1904). The trials and tribulations of poor Bloom will bear remarkable and often interesting resemblances to the adventures of Odyssey, as Bloom navigates 20th century Dublin with as many Scyllas and Circes as Odysseus himself. Noted for its forward thinking style, its interpretation of the Odyssey, and its commentary on 20th Ireland as a political entity, Ulysses has become a must-read classic in its own right. 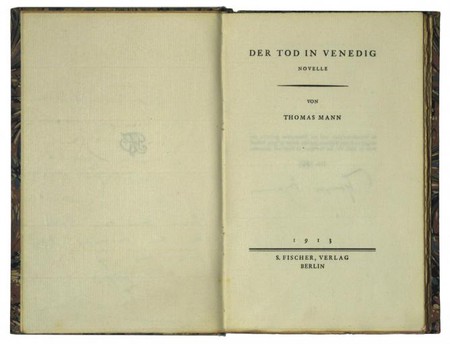 Though Death in Venice is inspired more by Goethe’s The Sorrows of Young Werther in its narration of a dangerously forbidden love, it has also been significantly influenced by Euripides’ Bacchae, and the lore surrounding Bacchus and Bacchants through its portrayal of the dangers of hedonism. Taking Goethe to the next level, Mann narrates the holiday and subsequent death of von Aschenbach, a famous author who grows increasingly obsessed by a young boy he happens to chance upon, resorting to the ridiculous and the absurd in pursuit of his forbidden love. Exploring that Nietzschean contrast being self-restraint (classically represented by Apollo), and excesses (embodied in Dionysus), Mann fuses Classical Greek and modern German philosophy to create a work of incredible depth and beauty. 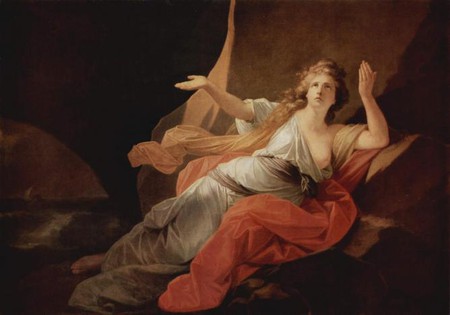 Death of Dido by Füger | © The Yorck Project/Wikicommons

The dramatized English version of the Dido episode in Virgil’s Aeneid, Marlowe romanticises and revolutionises the story so as to shift the main emphasis onto Dido, as opposed to the more traditional focus on Aeneas, the eponymous hero. Narrating the story of Dido’s fanatical love to the hero who eventually abandoned her, Marlowe paints a sympathetic picture of the despairing Dido, and the drama of the closing scenes as she literally burns for her love, and is followed by her grief-stricken suitor, and her servant Anna (who loves the suitor) is symptomatic of the macabre and sentimental tendencies of Tudor tragedy. Using blank verse, Marlowe employs his typical flair for poetry and playwriting to create a tragic work with great emotional pathos. 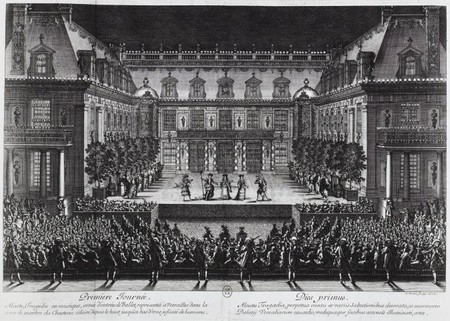 Performance of Lully’s opera Alceste (“ornamented with ballet entrées”) in the Marble Court at Versailles on 4 July 1674, the first day (Premiere Journée) of the grand divertissement ordered by Louis XIV to celebrate his recent victories in Franche-Comté | © Sir Gawain/Wikicommons

Adapted by Corneille and Philippe Quinault into verse afterwards, Psyché is considered one of Molière’s greatest works, and was received with incredible acclaim by its contemporary audience. Using Apuleius’ The Golden Ass, it recounts the love story of Cupid and Psyche in a much more tame fashion than the more ribald work of Apuleius. A play of great comedic genius, Molière tailored it to suit the more conservative French audience of the 17th century, thus creating a work that is comic without being too vulgar. Unfortunately, though revived many times during Molière’s lifetime, the elaborateness and costliness of the set makes it a work that is never revived today, and is simply used as a theory text for analytical study. 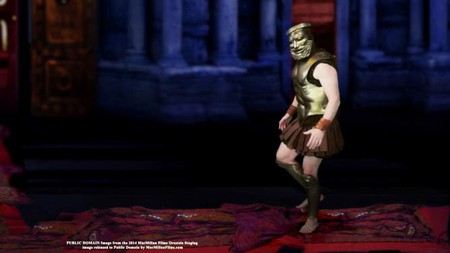 In Agamemnon (the first play of three in the Oresteia) Agamemnon is persuaded to walk on peplos garments in this pivotal scene of the drama. This is a still from the MacMillan Films 2014 production of the Oresteia. | ©JamesMacMillan/Wikicommons

Hugely ambitious in both its vision and its scope, Mourning Becomes Electra is based on Aeschylus’ Oresteia and it explores the latent themes of incest, jealousy and revenge with uncomfortable acuity. Fusing the structure of the Oresteia, with three parts called Homecoming (corresponding with Agamemnon), The Hunted (Aeschylus’ The Libation Bearers), and The Haunted (Aeschylus’ The Furies) with heavy borrowing from the Oedipus trilogy, O’Neill’s work is a profound and deeply disturbing study of identity, love, and regret. Set in 1860s New England, O’Neill revamps the tradition by having his characters motivated by impulses informed by Freudian psychological theory, as opposed to being driven by fate. Intense and explosive, the events surrounded the Mannon household as narrated in O’Neill play is powerful, unsettling, and absolutely unforgettable. 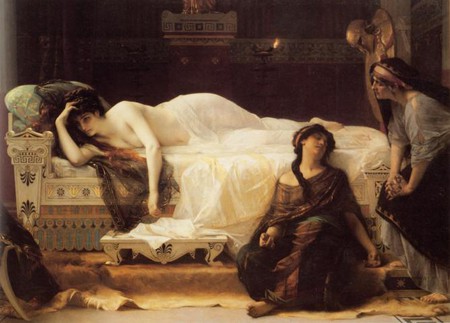 A play that further consolidated Racine’s reputation, Phèdre has become an integral part of both 17th century drama and of the French lexicon itself. Turning to Classical sources once again to narrate the tale of Phaedra, Racine’s treatment has created a timeless and inexplicable anti-heroine. The previous versions of Seneca and Euripides tended to focus on the events themselves, but Racine adeptly explored her character instead. From her tendency to love the forbidden, like her mother, to her absolute fear of her austerely ‘virtuous’ father, to the fact that she is both the instrument of others’ suffering and the victim of her own impulses, the character of Phèdre is beautifully complex, and the play itself is rightly called ‘a masterpiece of the human mind’. 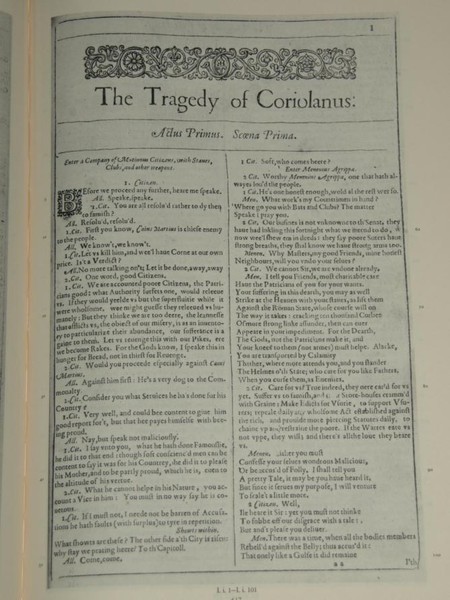 Photo of the first page of Coriolanus from a facsimile edition of the First Folio of Shakespeare’s plays, published in 1623 | © Cowardly Lion/Wikicommons

A drama that spans the rise and fall of the tragic hero Coriolanus, war hero and eventual traitor, Shakespeare based his play on Plutarch’s The Lives of Noble Grecians and Romans to create a fictional account of the real-life hero. Exploiting the politically fraught and terror-laden atmosphere of Stuart England, where tensions over political and religious beliefs caused ruptures that could literally lead to death, Shakespeare uses the similar situation in Republican Rome to make a masterly exploration of the themes of the fragility of popularity, pride, honour, and treachery, using the tragic heroism of Coriolanus to prove that posterity should not despise the sinner, but merely the sin. Powerful and moving, Coriolanus is an experience both to be read and to be watched on stage.