10 Historic Moments on the London Stage which Shaped British Theatre

London is the theatre capital of the world, with the highest concentration of theatres of any city anywhere. Walk through Central London and you will see the glowing lights of the Apollo, the Globe, the Coliseum, Soho Theatre, the Young Vic, the Old Vic, the National…the list seems never ending. Theatre in London, however, did not always look the way it does today. It has evolved through years of financial, social and political upheaval, all of which have shaped British theatre into what we know it as today. 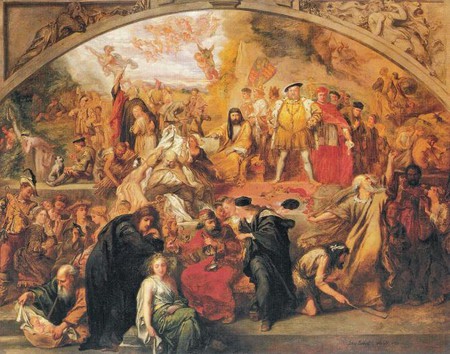 Traditional ‘special effects’, particularly for popular scenes of gore, had been stipulated in the instructions for many plays since the Ancient Greek theatre. In English theatre, as far as records indicate, special effects first appeared in the religious ‘cycle’ plays, or epic enactments of the Bible, which were performed across the country in celebration of festive days. In the York Play Cycle (1376 – 1474 AD) the graphic depiction of the Crucifixion required the technical innovation of the trebuchet, a kind of turntable that could quickly substitute the actor playing Christ for a dummy filled with animal blood. The dummy could also be filled with intestines and various forms of offal, to provide a real flesh-and-blood, sensorial experience for the presumably rapt audience. The trebuchet continues to be used, for example by Trevor Nunn in his production of Les Misérables, although with substantially less offal.

Student theatre brought the English into the canon of comedy in the 16th century. Ralph Roister Doister, written by schoolteacher Nicholas Udall, is generally considered to be the first English comedy, and was performed by Udall’s boy pupils. Around this time Queen Elizabeth I had ascended to the throne and banned all religious drama in the hope of quelling religious tension. In doing so she put a nail in the coffin of the most predominant form of English theatre; the other nails were provided by the growth of secular playwriting that would blossom in the 1590s with Thomas Kyd and Shakespeare’s generation. The English began to engage more creatively with new theatrical forms, as with Ralph Roister Doister, which combined elements of Classical Roman comedy with those of the English medieval, and threw a satirical glance at the burgeoning English middle classes.

Running almost continuously for two decades, Thomas Kyd’s The Spanish Tragedy was by far and away the first play to hit the London stage with such influential and long-lasting success. The appetites of the London crowd in Renaissance times were bloody. Casualties in Kyd’s play include five murders (not including one that takes place before the play begins), three suicides, one public execution, and one tongue bitten off by its owner, as a spiteful refusal to speak. Needless to say, emotions run high in this tragedy, which is also credited with bringing the ‘revenge tragedy’ genre to the English stage, and with hugely influencing a certain well-known play of the next generation, Hamlet. Suspiciously similar themes appear in Shakespeare’s play, although there the hero soliloquizes, ‘Break my heart, for I must hold my tongue’, which is somewhat milder than ‘bite off’.

As they were enclosed venues filled with people of all social classes and were frequently the site of petty crime, the playhouse of Shakespeare’s time became notorious as a transgressive space of disorder, and so conventionally not a place for women to flaunt themselves on stage. According to Oliver Cromwell, it was not a place for anyone to flaunt themselves on stage, and all theatres were banned in his Republic. In 1660, Charles II not only reopened the theatres, he also made it a legal requirement for women to play female parts, supposedly after a performance he was attending was disrupted when a male actor had not finished shaving in time for his moment as a woman. The first actress on stage was Margaret Hughes, who appeared as Desdemona in Othello. Although credited with being the first to officially take to the London stage, a unique figure by the name of Mary Frith, or Moll Cutpurse, or the ‘Governess of London’s underworld’, legendarily beat her to it. Frith was a thief, a pimp and a cross-dresser, who smoked, wore britches, and procured both men and women for both men and women. She also performed obscene songs regularly at the Fortune Playhouse, and allegedly made her theatrical debut in a performance of The Roaring Girl, a play by Dekker and Middleton about her, but not with her on the cast list. Moll was apparently unimpressed with the male actor rendering her on stage, and thought she could do better. 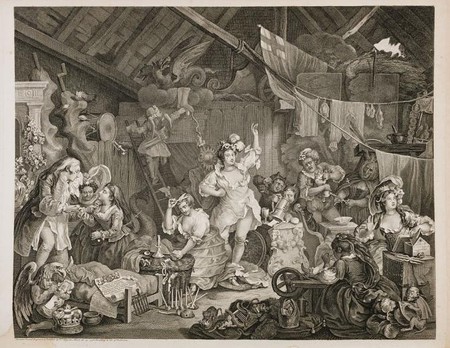 Records tell of North African musicians entertaining English crowds in the 13th century. However, it was the trans-Atlantic slave trade that swelled the number of black Londoners, not all of whom were enslaved, and some of whom were performers. Hogarth’s engraving of 1783 portrays a group of black actors preparing for a show, but it would be another hundred years before a black performer truly became a star on the London stage. Ira Aldridge, born in New York, arrived in London at the age of eighteen, and 38 years later took British citizenship after a successful acting career. Known as the ‘African Roscius’, Aldridge famously played Othello, but like his contemporary Samuel Morgan Smith (who came to London specifically because he could not find acting work in the States), he significantly played other key Shakespearean roles as well, including Macbeth, King Lear, Shylock and Hamlet. Aldridge’s London debut in 1833, at the Theatre Royal in Covent Garden, met with some protest, but he was apparently so impressive that even unhappy newspapers like the Morning Star grudgingly remarked that ‘it was doubtless sufficiently good to be considered very curious’. On the other hand, the Standard found him a ‘singularly gifted actor’, the Globe saw ‘beauties throughout his performance’, and the Spectator asserted that he ‘evinced a great deal of feeling and nature in his performance.’ 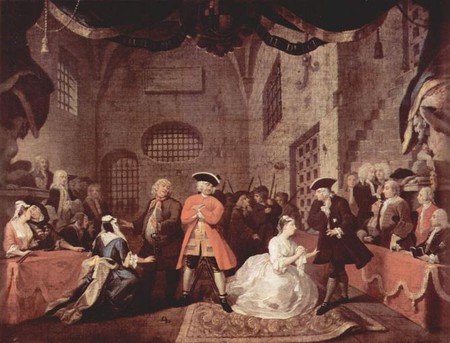 The Beggar’s Opera: The play that prompted two hundred years of censorship (1728)

Various political shows can be credited with provoking state intervention; not many provoke such a reaction that the whole artistic form is crippled for over two centuries. The eighteenth century is famed for its satirical wits Swift and Pope, but it was John Gay’s satirical opera The Beggar’s Opera, which premièred at the Lincoln’s Inn Field Theatre in 1728, that allegedly provided Prime Minister Robert Walpole with the trigger to enact the Licensing Act, which made all plays subject to the censorship of the Lord Chamberlain. Gay’s extremely popular opera skewered the government of Robert Walpole and the corruption of the upper classes, and received 20th century treatment by Bertolt Brecht and Kurt Weill in their similarly influential adaptation, The Threepenny Opera.

Saved: The play that prompted the end of two hundred years of censorship (1965)

The English theatre remained in the grip of censorship for more than two hundred years. In the 1960s, Edward Bond’s Saved was put on at the Royal Court Theatre, despite its license having been rejected. The play bleakly portrayed working class conditions and caused outrage over a scene in which a baby is stoned to death in a pram. The Lord Chamberlain prohibited the play’s production unless this sequence was cut, along with a sexually charged scene in which a young man darns an older woman’s sock while she is wearing it. To get around the issue, director William Gaskill called the Court a ‘private club theatre’ for the duration of the show’s run, which didn’t stop him from being apprehended by police in the foyer one night, and from the case going to court. However, the play is credited as playing a role in the growing call for an end to theatre censorship, and two years after the Court was charged for an unlawful performance, the Theatres Act revoked the powers of the Chamberlain. 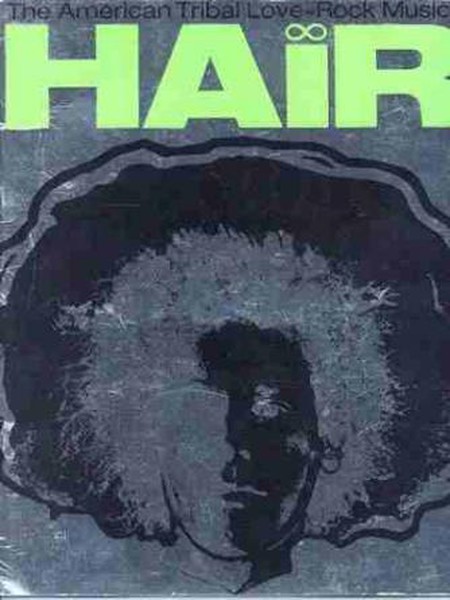 Thanks to the Theatres Act, actors could finally get bare on stage. A year after its controversial debut in New York, the rock musical Hair created a scene that could never have been witnessed in the capital previously: a parade of actors, completely naked, revealed in the uncovering of a huge sheet. Around the same time, outspoken supporter of the Theatres Act Kenneth Tynan produced Oh! Calcutta!, a revue of sex-themed sketches by various authors that included simulated sex scenes. One of these authors was in fact the existentialist writer Samuel Beckett, who withdrew permission for the use of his short piece Breath, objecting to the sexual interpretation being applied to it. Tennessee Williams and John Lennon kept theirs in.

Opening of the National Theatre (1976)

Calls for a national theatre had abounded since the mid-nineteenth century. In 1910, George Bernard Shaw even wrote a short comedy, The Dark Lady of the Sonnets, in which Shakespeare stumbles across Elizabeth I and (modestly) tries to convince her of the necessity of building a national theatre to stage his plays. Fifty-three years later, but still not with a permanent building of its own, the National Theatre announced its arrival with Lawrence Olivier’s production of Hamlet in 1963, starring Peter O’Toole in the lead role. After Artistic Directorship passed from Olivier to Peter Hall, the National moved into the iconic, divisive and un-ignorable building that sits on the south bank of the Thames, described by ex-Associate Director Jonathan Miller as ‘a mixture of Gatwick airport and Brent Cross shopping centre’. Love it or loathe it, the National has now housed plays of all kinds for fifty years, reaching an audience of 4.3 million people worldwide last year, despite a 25% decline in Arts Council funding since 2011. Although not quite as cheap as the £1.28 stall tickets in 1963, you can get front-row tickets for £12 (or £5 for young people), providing the public with affordable access to good quality theatre even in times of economic stress. 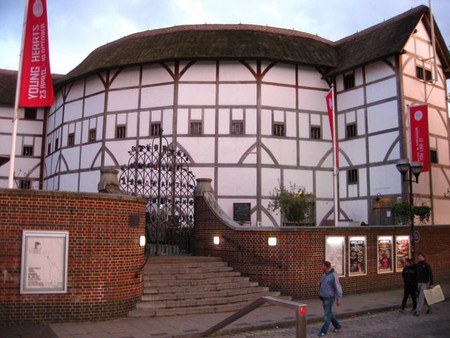 Twenty-seven years after American actor Sam Wanamaker began campaigning for the reconstruction of the Globe, and 352 years after the original Globe’s demolition in 1644, the new ‘Shakespeare’s Globe’ reopened, allowing modern audiences the closest glimpse possible of what theatre would have looked and felt like in Shakespeare’s day (albeit some two hundred metres away from where the original Globe actually stood). The Globe has, in fact, been rebuilt twice: the original burnt to the ground in 1613 during a performance of Henry VIII, when the special effect of a stage cannon went terribly wrong, the wadding igniting the thatched roof and quickly setting the whole edifice alight. The theatre was immediately rebuilt (this time with a tiled roof), but by 1642 the Cromwellian administration had all playhouses permanently closed, and two years later the Globe was turned into tenement housing. More than three and a half centuries later, Londoners of today can stamp their feet and call out obscenities in the Pit just like their Elizabethan predecessors, soaking in blank verse as their clothes soak up the cheerful drizzle of an English matinee. And why the name ‘The Globe‘? Well, all the world’s a stage.