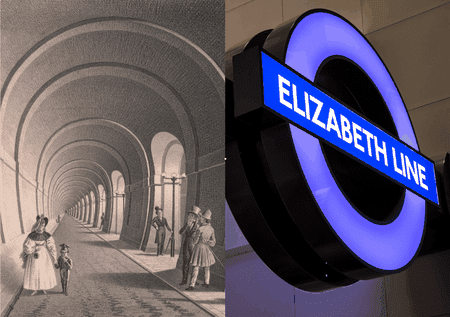 London Transport Museum has launched two new exhibitions, Digging Deeper and The Secret Life of a Megaproject, which delve into the fascinating history of London’s incredible Underground network and offers a peek behind-the-scenes at the latest Crossrail project due to be completed by the end of 2018. Here’s what we learned from the shows…

Ever gone on the Tube and wondered how the Underground tunnels were actually built without collapsing? Well it was the genius idea of Anglo-French engineer Marc Isambard Brunel to create a tunnelling shield (a circular temporary support structure), which was used to build the Thames Tunnel in 1843 – the first tunnel in the world to be constructed underneath a river. Once completed, the tunnel was dubbed the ‘Eighth Wonder of the World’ and a million Victorians flocked to see it. It was Brunel’s shield concept that paved the way quite literally for the Tube network in the future. Now, his famous Thames Tunnel has been unblocked after being abandoned for around 150 years and has been transformed into part of The Brunel Museum. 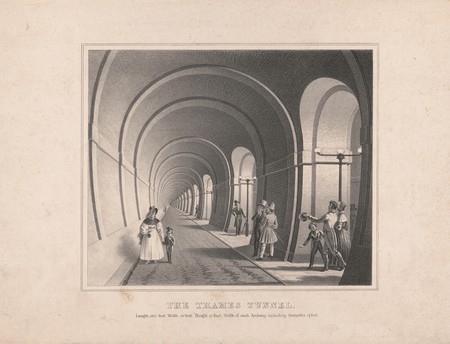 A lithograph of the Thames Tunnel | Library of Congress/Wikicommons

(Another fun fact: Brunel didn’t always pull off his projects – he ended up in a debtors prison in Southwark for 88 days. It was only once he’d been communicating with Alexander I about coming to work for the Tsar instead that the British government intervened, not wanting to lose one of the country’s greatest engineers to the Russians.)

It was called the Tower Subway, which was built with the aid of a machine designed by James Henry Greathead. Just like the Thames Tunnel, the Tower Subway was a commercial failure, but lead to the Greathead Shield, which dug the first electric railway in 1890. Subsequently, similar machines were used for the entire central London tube network over the preceding 50 years. 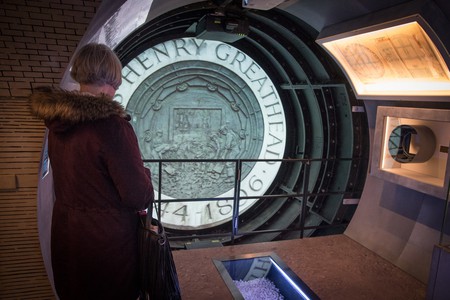 The tunnelling machines have got a bit more high-tech since Brunel’s day – the latest tunnel boring machines weigh 1,000 tonnes and 20-person ‘tunnel gangs’ have been working together around the clock to average around 100 metres of tunnelling a week. More than 200,000 tunnel segments were used to line to the 42km of tunnels for the new Elizabeth Line. 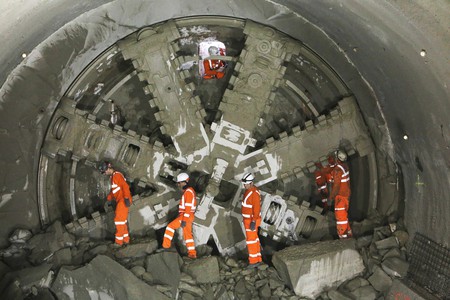 4 All sorts of artefacts were unearthed during the Crossrail excavation

From the jawbone of a medieval mouse to the left leg of a Roman horse, there were plenty of human and animal bones turned up during Crossrail’s excavation, including plague victims discovered under a road near Charterhouse Square in Farringdon dating back to the 14th century. 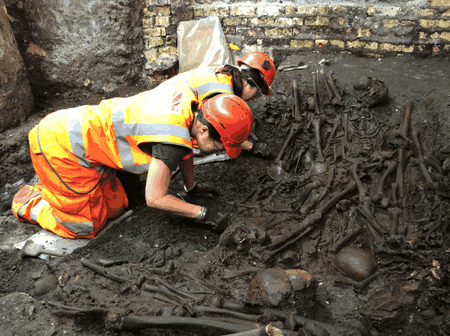 A new 1,500-acre RSPB nature reserve called the Wallasea Island Wild Coast Project is being created in Essex out of the 3 million tonnes of excavated earth from the tunnels. The new saltmarsh, lagoons and mudflats, known as Jubilee Marsh, has been made by raising the land above sea level in order to create a wildlife-rich environment for birds. It’s the perfect place to brush up on your bird-watching skills – look out for marsh harriers and short-eared owls. 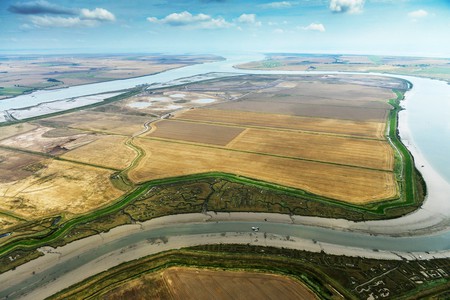 The brand-new stations include central locations Bond Street, Tottenham Court Road, Paddington and Farringdon, as well as Liverpool Street, Whitechapel, Canary Wharf, Custom House, Woolwich and Abbey Wood. Of all the stations, Farringdon will become Britain’s busiest, with 140 trains per hour passing through the station – a sevenfold increase in commuters. The entire line will stretch more than 60 miles from the east, including Shenfield and Abbey Wood, all the way to Reading and Heathrow in the west. 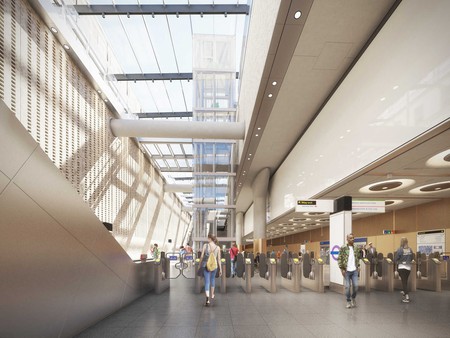 The Secret Life of a Megaproject reveals some of the new artworks that have been created specifically for Crossrail, including one of the largest artworks ever to be produced in London. A Cloud Index by acclaimed artist Spencer Finch consists of 60 hand-drawn panels to create a collage of clouds, installed into the roof of Paddington station. In addition, it’s just been announced that Japanese artist Yayoi Kusama will be designing her first permanent UK installation for Liverpool Street’s Elizabeth line station at Broadgate, while a bronze sculpture by British artist Conrad Shawcross will be erected outside of Moorgate station. In fact, all of the artists’ works can be seen in a new exhibition at Whitechapel Gallery called Art Capital: Art for the Elizabeth line, which runs until May 6 2018. 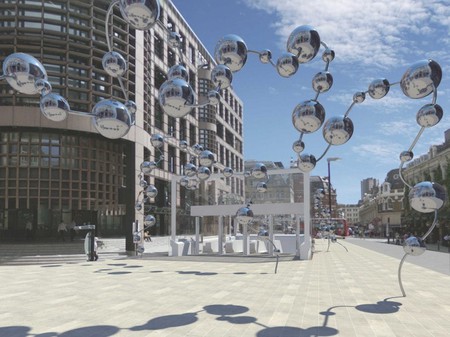 Working in collaboration with Exeter’s Wood & Wood, which has created signs for the likes of John Lewis and the BBC, a relatively small company in the Isle of Wight called A. J. Wells & Sons Ltd has been working on creating the 500 new Elizabeth Line roundels that will sit alongside the iconic red and blue Edward Johnston design. The very first roundel was designed as far back as 110 years ago, but it wasn’t until 1972 that it became the officially recognised symbol of the London Underground. 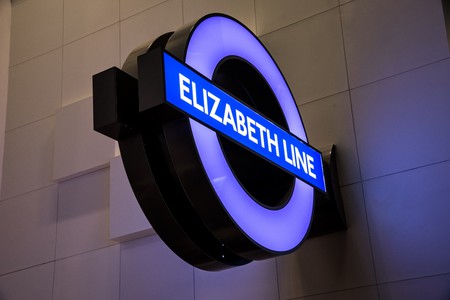 9 Faster services mean 1.5 million more people will live within a 45-minute commute of the city

The new line will increase central London’s rail capacity by an impressive 10%, with many commuters being able to get to work much quicker. The journey time from Heathrow airport to Liverpool Street will fall from just under an hour to 34 minutes, while a trip from Paddington to Liverpool Street will take just 10 minutes, as opposed to the 23 minutes it takes at the moment. 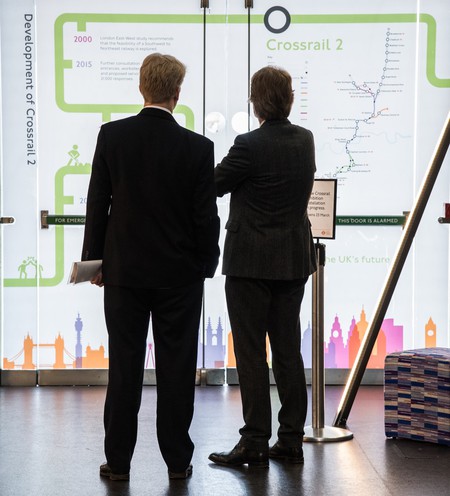 Those already living in London around the 41 stations along the Elizabeth Line are also reaping the benefits – the ‘Crossrail Bump’ means house prices have gone up dramatically, with prices around stations such as West Ealing and Forest Gate increasing by as much as 40% since work began on the line in 2009. In 2012, a study commissioned by Crossrail stated that house prices around new stations were predicted to rise 25% more than the average price rise in central London by 2021. 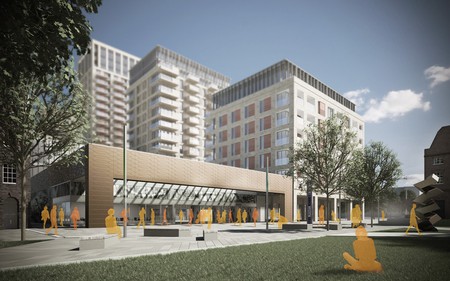