10 Emerging London-based Artists And Where To See Their Work

London’s art scene is continuing to boom with major museums expanding, renowned commercial galleries arriving from abroad – including Marion Goodman and Dominque Levy – and prices breaking records at auctions. The capital has firmly established its role as the centre of the European art world through its highly developed art infrastructure, which incorporates leading institutions with a rich cultural landscape. We take a look at 10 emerging London artists and where to find them. 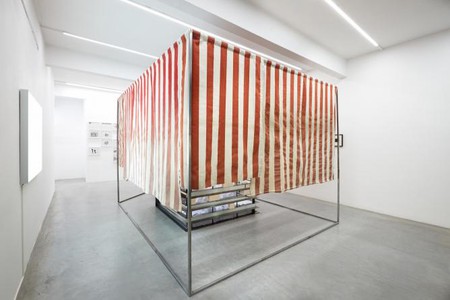 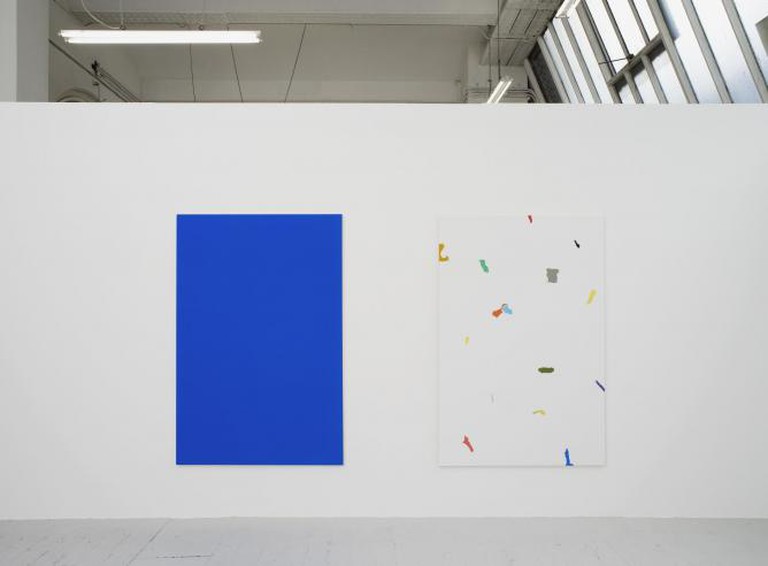 Alex Clarke, Best Good Friend, Exhibition View, Royal Academy Schools Show 2014, London | Courtesy the artist and Ronchini Gallery
Adeline de Monseignat’s work first came to public attention after she won the Visitor Vote Award at the Catlin Art Prize, 2012. Her sculptures, installations and ink drawings are inspired by Freud’s theory of ‘The Uncanny’, surrealism, Louise Bourgeois and Méret Oppenheim. She is interested in ‘making the familiar strange’ and uses tactile materials such as fur or sand, often encased in glass, to provoke tension between the animate and the inanimate. Her work plays with sensuality and the fear of the unknown whilst exploring life, birth, death, family, unity and fragility. Breathing ‘creaptures’, oozing black ink drawings, hairy eye balls and mirrored glass cylinders populate her intriguing oeuvre. In 2013, she participated in Articulate at Victoria Miro, a project that raised money for the charity Dramatic Need. Her work has been exhibited at Yorkshire Sculpture Park, Bleecker Street Arts Club and she is represented by Ronchini Gallery.
See 2015 Adeline de Monseignat’s solo exhibition ‘Home’ from 14 November 2014 – 17 January
Open In Google Maps
22 Dering Street, Mayfair, London, England, W1S 1AN, United Kingdom
+442076299188
Visit Website
Give us feedback 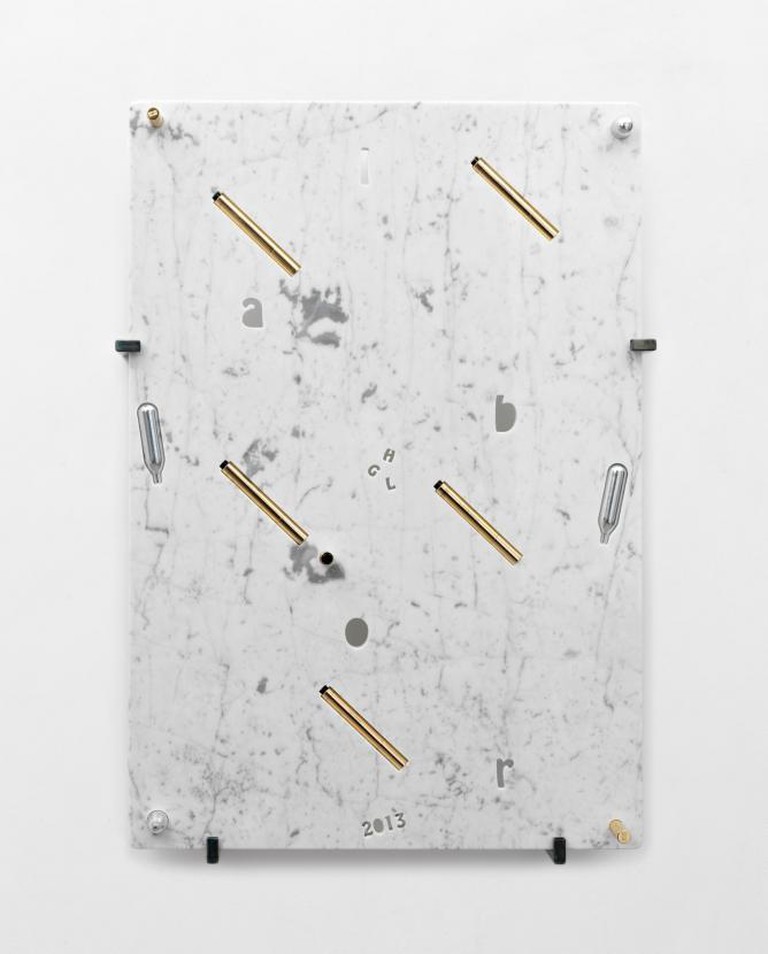 George Henry Longly, Labor, 2013, Marble, whipped cream chargers, Yves Saint Laurent Touche Éclat, and steel fixings, 82x57x18 cm | courtesy the artist
Alex Clarke graduated from Central St. Martins in 2010 and the Royal Academy Schools in 2014. Clarke creates groups of paintings, which, through a process of continuous making, editing and re-arranging build upon the idea of the act of making a painting as subject. The result provides a perceptual investigation into traditional notions of depth, representation and portraiture created solely from contemporary use of abstract methodology and collage. Clarke notes that while making a group of works his central focus and aspiration solely surrounds the aspect of creation, and he considers the relationship between the viewer and the painting to be of paramount importance. His blue paintings and use of coloured paper subtly reference the work of Henri Matisse.
Alex Clarke was part of the group show All That Matters is What’s Left Behind (19 September – 8 November 2014)
Open In Google Maps
London, United Kingdom
Give us feedback

Another graduate of Central Saint Martins, George Henry Longly has exhibited at leading galleries across London including David Zwirner, Laure Genillard and Laura Bartlett. Transcending the confines of the art world, he has worked with King’s Cross’ uber-cool restaurant Shrimpy’s and is a resident DJ at Anal House Meltdown – a club night at the Vogue Fabrics House in Dalston, where artists Eddie Peake and Prem Sahib also play. Longly recently turned Sou Fujimoto’s Serpentine pavilion into a catwalk for Park Nights – a series where artists’ react to the installation – using the fashion industry as a comment on the art world. The theme of his work surrounds the meeting of art and everyday life. His sleek sculptures feature objects such as nitrous oxide canisters, cans of hair growth treatment and Yves Saint Laurent’s iconic gold ‘Touche Eclat’ foundation. 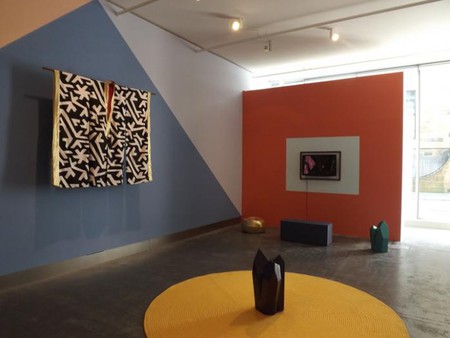 Born in Kenya and now based in London, Grace Ndiritu has had a wide range of national and international exhibitions, including screenings at the ICA, Chisenhale Gallery and the Venice Biennale in 2005. Her video artwork ‘Raiders of The Lost Ark’ references 80’s movie pop culture while laying the foundation for a discussion about conspiracy theories. Grace’s ‘SWEATSHOP’ series of painting installations explores the idea of the sweatshop from three juxtaposing, overlapping angles. Her enchanting photography installation, ‘A Quest For Meaning’, is an universal narrative, a creation story from the beginning of time. Through photography, Grace tells ‘stories’ of similarly disparate objects and events from the Big Bang until now, by crafting new connections between them. 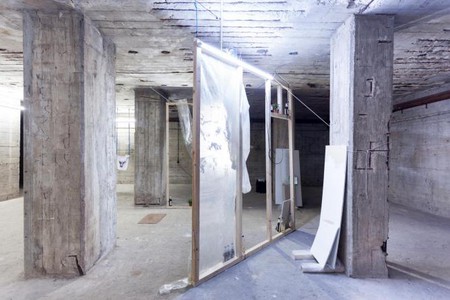 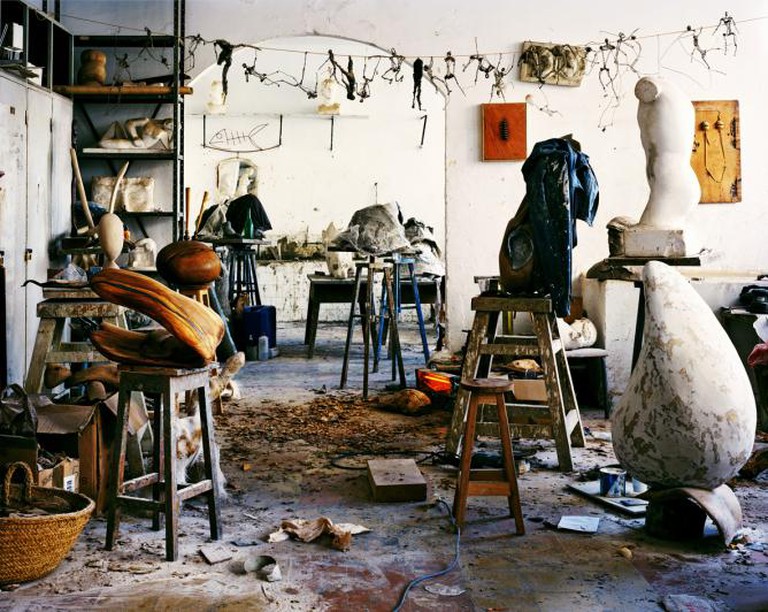 Wysing Arts Centre, Cambridge
Jesse Darling has been described as a ‘post-internet’ artist, her works spanning digital, video and installation art mediums, using Tumblr and Photoshop as integral components of creation. Having turned up to school solely to complete A-level Art, the rebellious Darling was thrown out of Amsterdam’s Gerrit Rietveld Academie before finally settling at London’s Central St Martins. Darling’s art explores notions of ‘self’ in the internet age, dissecting queer visibility, neoliberalism and postcolonial constructions in her stimulating and often inflammatory pieces. Influenced by the Foucauldian suggestion that everyone’s life might become ‘a work of art’, Darling’s pieces are often personal and deeply revelatory. She describes her Tumblr, ‘Brave/New/Whatever’, as ‘a semi-public dumping ground for research and experimentation, right on the outskirts of the main drag’, a breeding ground for ideas which mixes her original works in with the ‘rhizomatic junkspace’ of social media. Recent exhibitions include presenting a series of new sculptures in ‘How Can It Hurt You When It Looks So Good’ with Arcadia_Missa at START Art Fair. This November will see Darling take residence at the much respected Wysing Arts Centre, developing new work that will explore contemporary life and alternative versions of the future.
As part of The Future residency programme, Jesse Darling’s works can be found from 3 November – 12 December
Open In Google Maps
Fox Road, Cambridge, England, CB23 2TX, United Kingdom
+441954718881
Visit Website
Give us feedback

Leonora Hamill works primarily in photography and moving image. Winner of the Prix HSBC pour la Photographie, Hamill’s ‘Art in Progress’ series is inspired by art schools across Europe, Asia, Africa and the Americas. The series, which started in 2009, consists of images of studios where the art students work. Shot with a large format camera and printed analogically, the images are intentionally detailed, frontal and neutral. Despite their absence, the students remain present through the spaces they have occupied, the objects they have engaged with, and the work they are in the process of making; the spaces exude a palpable sense of collective energy. Hamill explains: ‘I photograph empty studios in art schools marked with the richness of the activities undertaken by the students.’ The studios, ranging from Saigon to Saint Petersburg and Bombay to New Haven, condense the presence of students, the passage of time and the production of art, creating an intensely stratified space. 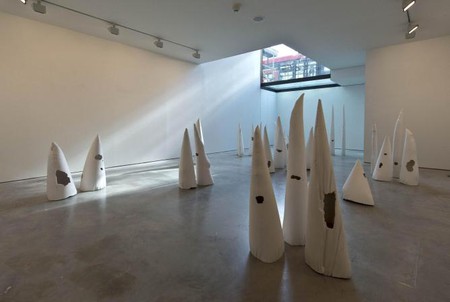 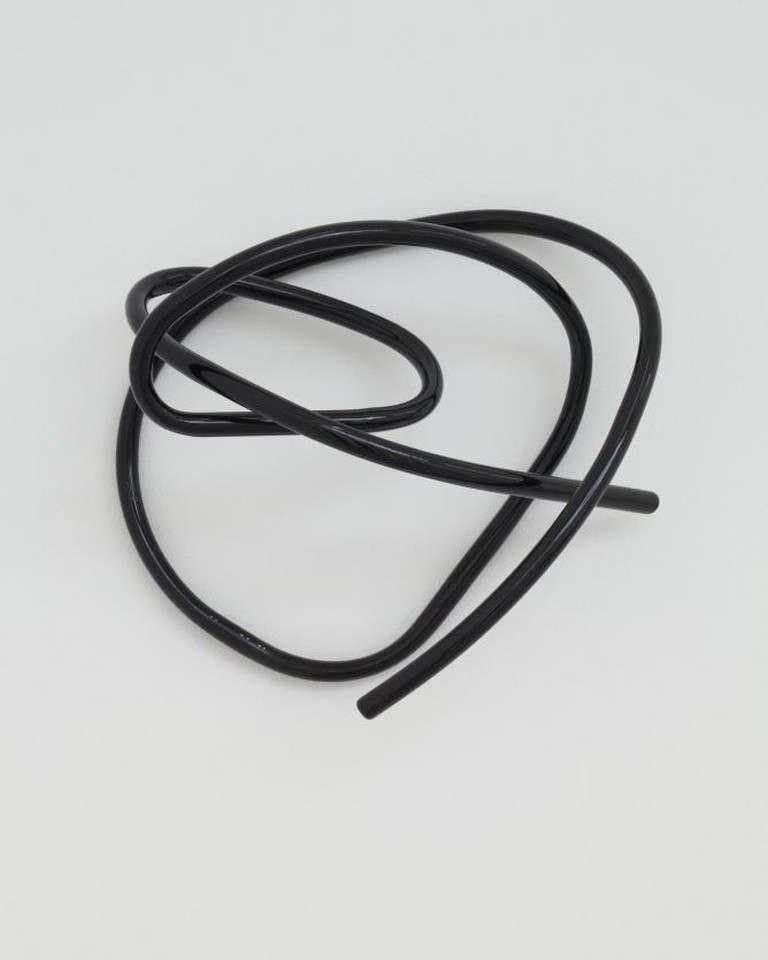 Prem Sahib, Eclypse, 2013, neon glass tubing, 31 x 34 x 18 cm, Private Collection, London, Photo Guy Archard | Courtesy the artist and Ronchini Gallery
Artist and model Phoebe Collings-James is becoming as widely recognised for her bracing artworks as her high-profile photo-shoots. Collings-James studied at Goldsmiths– where one tutor denounced her drawings as ‘pornographic’ – and has since exhibited her provocative works internationally, including shows at Mexico City’s cutting-edge Preteen Gallery and London’s Ronchini Gallery. Collings-James works across painting, sculpture and video addressing sexuality, violence and desire. Clay phalluses splayed through the seam, swinging from a noose, plaster casts mimicking outfits of the Ku Klux Klan and strip cam style videos set to David Attenborough soundtracks are examples of just some of the mixed media Collings-James explores. At times, her works are deeply physical; her ‘Black Ivory’ series saw her place un-stretched canvas on the floor before painting on it using her whole body. Collings-James was the first female artist in residence at the Still House Group, a Brooklyn-based artist collective. She has spoken on art and gender at Tate Britain and Southbank’s WOW Festival.
Phoebe Collings-James was part of the group show ‘All That Matters is What’s Left Behind’ (19 September – 8 November 2014)
Open In Google Maps
London, United Kingdom
Give us feedback 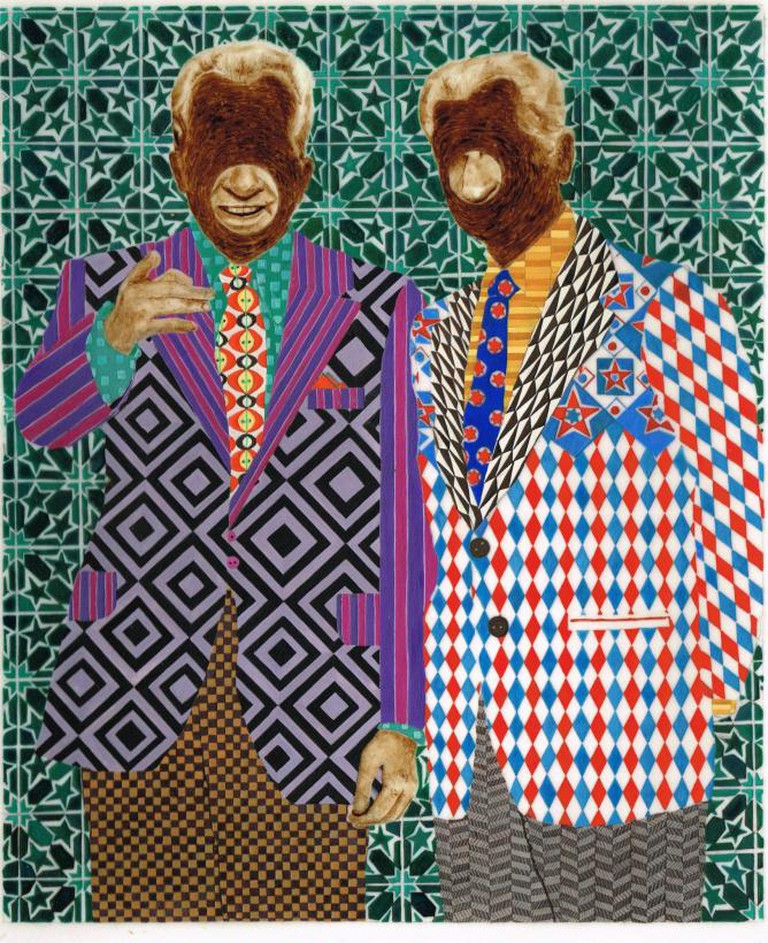 Soheila Sokhanvari, Shah and Nixon (1974), 2014, Egg tempura and Iranian Crude Oil on velum | Courtesy the artist and Wysing Arts Centre
Born in London to an Indian father and a Polish Catholic mother, Prem Sahib gained his MA from the Royal Academy Schools in 2013, having already exhibited at prestigious galleries such as David Zwirner and David Roberts Art Foundation. Sahib works primarily in sculpture, but also uses installation, performance, photography and sound to create works which explore the abstract alongside the autobiographical. His practice is informed by a language of display, its elements embodying discrete formalism placed in choreographed relationships with one another. Absent bodies are eerily present within the adopted physicality of inanimate objects –bomber jackets, crash mats and concrete footballs are utilised by Sahib to expose human experience. Using an economy of material and form Sahib aims to produce an emotional reaction from minimalist language, his sparse, geographical shapes are underlined by lurking dialogues of intimacy, sexuality and desire.
Open In Google Maps
London, United Kingdom
Give us feedback 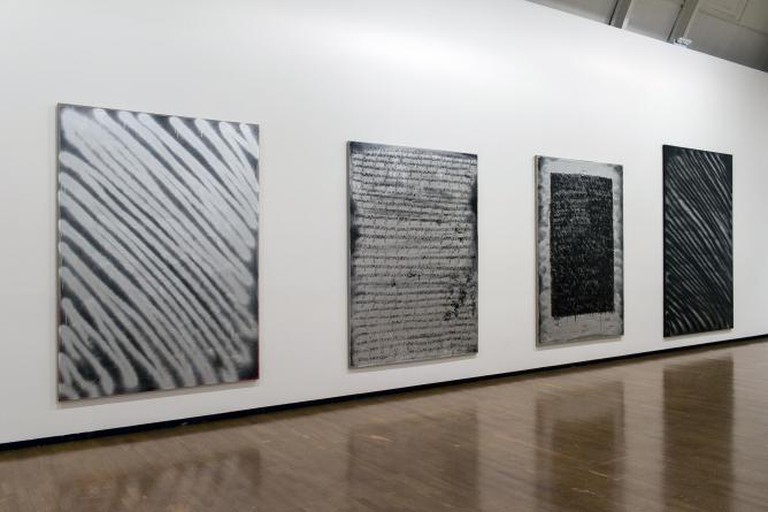 Art Gallery
Facebook
Email
Twitter
Pinterest
Copy link
Share
Map View
Ziggy Grudzinskas is a current third year student at the Royal Academy Schools. His work builds upon his background in graffiti art to create abstract large scaled works on canvas, created by various emotive processes. His painting practice follows a dedicated investigation through materials and the perception of image. While at times a piece is begun with a particular process or act of painting in mind, at others the construction of the object as a painting is the primary concern. Earlier this year Grudzinskas collaborated on the artistic project ‘Wu-Tang is For The Children’, celebrating the influence Wu-Tang Clan’s music, lyrics and legacy has had on art illustration and fashion. The piece saw Grudzinskas spray paint on the roof of a tunnel with a fire extinguisher, whilst collecting the spray back on canvas – rendered in a light-hearted manner, Grudzinskas’ artistic gesture is used as a document of a specific time and an act free from mind.
Ziggy Grudzinskas’ was part of the group show ‘All That Matters is What’s Left Behind’ (19 September – 8 November 2014) at Ronchini Gallery, 22 Dering St, London, W1S 1AN, UK, 020 7629 9188
Open In Google Maps
London, United Kingdom
Give us feedback
Give us feedback