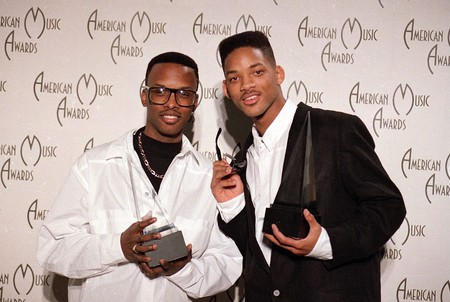 Will Smith And DJ Jazzy Jeff are getting back together for a rare UK show – in Blackpool.

The rappers, who enjoyed huge success in the 80s and 90s with hits like ‘Summertime’ and ‘Boom! Shake The Room’, will be headlining Livewire Festival from August 25 to 27 as well as MTV’s Summerblast Festival in Croatia.

Hollywood star Smith announced the news on his Facebook page by posting a throwback video with the caption, ‘First two shows are locked!! Y’all ready?!’

His message suggests that there might be more shows to come.

The Jacksons, Jason Donovan and Pete Waterman’s Hit Factory are also on the bill for Livewire, which takes place at Headland Arena.

Smith and Jazzy Jeff are also rumoured to be performing at this year’s Glastonbury.

The DJ previously told Bang Showbiz, ‘We had interest in Glastonbury last year. Whenever the decision comes down, I’m there.

‘The biggest part of us doing this [reuniting] is the clearing of the schedule. I tour about 180 days out of the year but he makes movies, so it’s more on his side of having to clear a schedule for us to be able to rehearse and go on the road.

‘Sometimes it gets a little hard with him being one of the biggest movie stars in the world to free up his time. He absolutely positively wants to do this. The funny thing is, he made the announcement before he even told me.’