Why You Should Care About Wild British Bluebells 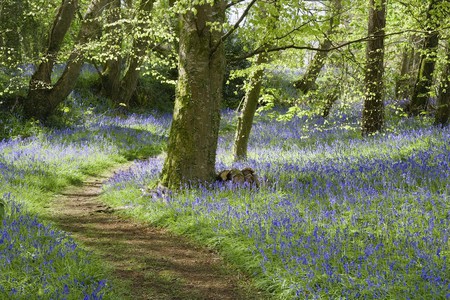 A path winds through the bluebell wood in April on the estate at Godolphin House, near Helston, Cornwall. © Courtesy of National Trust Images, Andrew Butler

Japan has sakura season, but the Brits have bluebell woods. What it is about this little blue flower that makes it so special to Britain?

In April and May every year, Britain’s woodlands sing the blues. The ground below the island’s oldest trees is transformed by a carpet of bluebells – small, dappled-shade-seeking hyacinths that are a special symbol of Britishness.

For the rest of the year, the British bluebell lives underground as a bulb, forgotten. But when the flowers appear in late April, they appear in the billions. Extraordinarily, there are so many bluebells in the U.K. that they account for nearly 50% of the world’s population of the flower. However, we forget about them for most of the year. You won’t see them in bouquets or be able to buy them in garden centres or flower markets. You need to go down to the woods.

Why do we care about bluebells so much? Well, nothing really prepares you for spotting the surreal sight of the forest floor turned blue. It’s like stumbling across bioluminescence in the day or a scene from James Cameron’s Avatar.

The bluebell has imprinted itself on the British sensibility. The scent of bluebells – clean, sweet and strong – is even sold by British perfumers, like Penhaligon’s and Jo Malone. 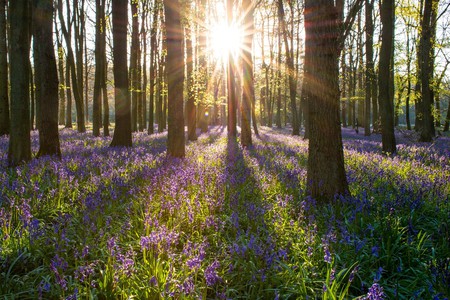 A bluebell by any other name

If you come across a carpet of bluebells under the trees, you know that you are in a plot of ancient woodland – one that has lived undisturbed for hundreds of years. Because of this, bluebells are known as ‘indicator plants’.

Before Victorian botanists gave them their Latin name, Hyacinthoides non-scripta, they were known by various names, some prettier than others. Granfer-greygles, fairy-bells, cuckoo flower and dog leek are some of the various names the flowers have had, and in Scotland they are called harebells.

Historically, bluebell sap was used as a mild glue, perfect for the fiddly task of sticking feathers on arrows to make fletches. However, they’re known for their beauty, rather than their utility. 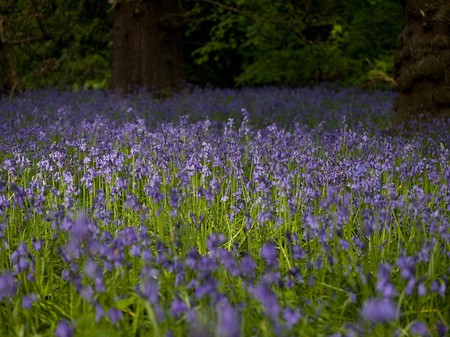 It’s surprising to find out that, before the 19th century, the bluebell wasn’t a popular flower. If anything, bluebell woods used to be seen as something a little unearthly, a little unsettling. Local legends associate the flower with solitude, regret and constancy. Some believed that if you picked bluebells, you’d be led astray by fairies. Seeing them was considered a magical experience, but one that is a little disturbing.

Gerard Manley Hopkins, one of England’s most beloved nature poets, writes about encountering bluebells near Stonyhurst College in Lancashire. To him they ‘look like the heads of snakes.’ This might sound threatening, but it’s the British bluebell itself that’s under threat.

Victorians brought the Spanish bluebell, common in Europe, back to their English country gardens. It spread quickly, and now this invasive species is gaining ground on the British bluebell. Spanish bluebells are scentless and upright, whilst their British cousins are perfumed and arched like a shepherd’s crook. To complicate matters, the Spanish bluebells breed with the Brits, creating a hardy hybrid that is eliminating the native species. 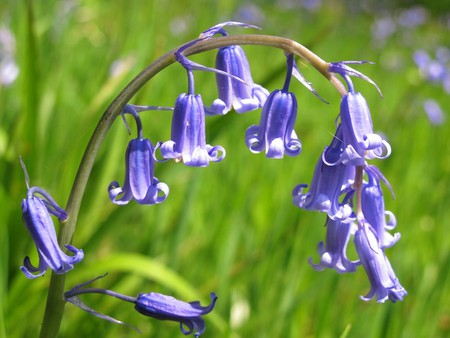 How the bluebells are being protected

British bluebells are protected in the U.K. So important and beloved are these flowers that it’s actually a criminal offence to remove bluebell bulbs from their woods. It’s even considered unlucky by some to bring bluebell flowers indoors. When you’re out bluebell hunting, stay on pathways in forests so you don’t trample new shoots. If you’re a gardener, don’t plant Spanish bluebells or hybrid species in your garden, and pull up the bulbs if you find them. You can also protect British bluebells by supporting the Woodland Trust, which holds a Big Bluebell Watch every year.

Where you can find bluebells near you

Bluebells are beautifully British. However, you can also see them on the continent, in countries like France (Hyacinthe non-écrite), Germany (Glockenblume) and Sweden (Engelsk klockhyacint). They prefer the climate of wild, wet western Europe to anywhere else in the world. Staying local, bluebells crop up all over the U.K. between April and May. Combine a bluebell walk with a stroll around the grounds of a National Trust property (the National Trust has a list of its best bluebell spots), where coppicing and forest management give the bluebells enough light to grow in their millions. 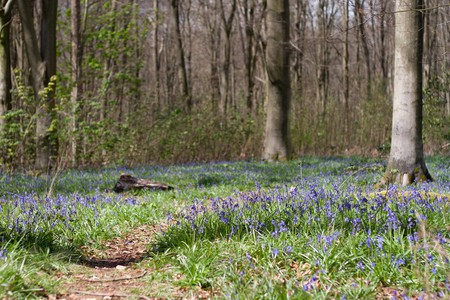 In Northern Ireland, visit Prehen Wood near Derry City. In Wales, you can find bluebells growing on the clifftops at Skomer Island. The Bluebell Railway in Sussex once ferried Victorians along a forest track to see the bluebells. Now it takes families for the same famous trip.

Londoners, don’t despair, there are even bluebells in the capital. Go to Kew Gardens and you’ll find them in the woods behind Queen Charlotte’s cottage.

Just remember to take your camera.