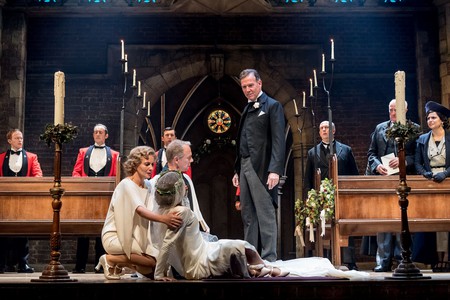 It’s sweet, flirty and dramatic. It’s probably Shakespeare’s funniest work. And it’s packed full of romance. That’s right, Much Ado About Nothing is the perfect play for you to cuddle around on Valentine’s Day. Lucky for Londoners, the Royal Shakespeare Company’s currently got a great production. Unlucky for everyone else, that production is set to end its run in March. 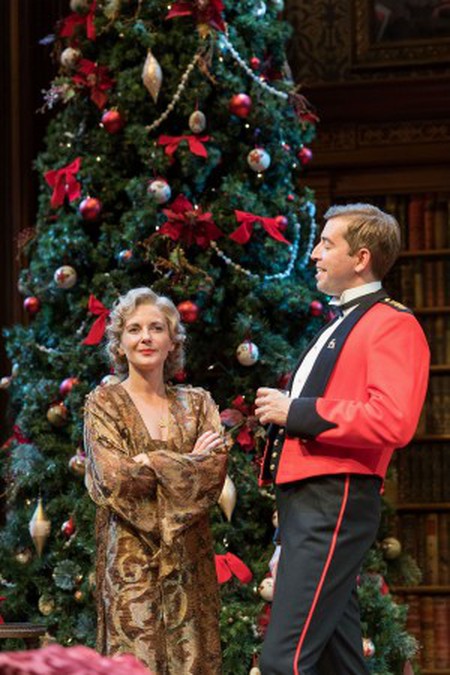 If Much Ado About Nothing is so fitting, it’s first and foremost because of its two main characters — Beatrice and Benedick. In typical modern rom-com fashion, they both start out as hated rivals, insulting each other all throughout the first act, before their friends ‘trick’ them into falling in love with one another. Their early interactions, walking the fine line between playful and vicious, are the epitome of Shakespearean wit.

And the comedy is put on evidence from the very start. A foretaste is given when a messenger, coming to announce the arrival of returning soldiers (a party which includes Benedick), remarks on Beatrice’s reaction: “I see, lady, the gentleman is not in your books.” To which she immediately responds: “no; an he were, I would burn my study.” And that’s only the beginning; the two eventual lovers’ first encounter goes thusly, following a bad joke from Benedick:

BEATRICE
“I wonder that you will still be talking, Signior Benedick: nobody marks you.”

BENEDICK
“What, my dear Lady Disdain! are you yet living?”

In the RSC’s recent production, the action has been transposed to the First World War’s immediate aftermath, which allows the excellent Lisa Dillon to portray Beatrice with a certain hauteur. She is, in that sense, the typical flapper wit, not averse to enjoyment and drink, and appreciated for her bite. Edward Bennett, meanwhile, successfully adds physical comedy to the role of Benedick, turning the scene in which he overhears his friends talk about Beatrice’s love for him (part of their ploy to make the two marry each other) into a nonstop laugh riot.

Their romantic evolution is remarkable for its lack of drama, and by the time things turn sour in the fourth act they are the only characters more or less holding it together. After the other lovers, Hero and Claudio, have their marriage cruelly broken at the ceremony (he was misled into believing his fiancée was unfaithful), only Beatrice and Benedick’s relationship is not thrown into complete disarray. They become more serious, having already fallen in love with one another, and provide with stability amid all the chaos and potential tragedy. 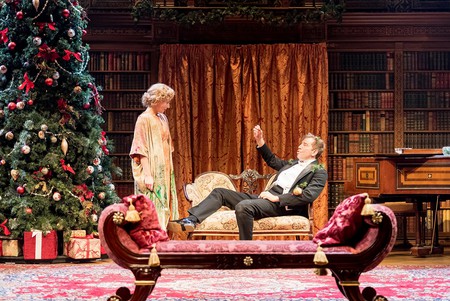 It is their playfulness, devotion to one another, and emotional reaction to the troubles around them that make the two more relatable — and their romance is all the more touching for it.

Yet the RSC’s production manages to add a little more depth than is usually given to the play. The setting, its Christmas décor, and 1920s-inspired music sprinkled here and there throughout the action give this Much Ado About Nothing an added melancholy—a nostalgic feel most productions of the work don’t possess, and one which makes its romances all the more tender.

This is perhaps incarnated more than anything in the character of Dogberry, the constable of the Watch, played to perfection by Nick Haverson. His hilarious ineptitude, usually the dramatic last acts’ comic relief, is here added a little more substance. The man is quite obviously a partially-damaged veteran, and his dejected response to a prisoner’s insult provides the play with its gloomiest moment.
Much Ado About Nothing will be running at the Theatre Royal Haymarket until 18th March. More info HERE