Why Is Rugby League So Popular in the North of England? 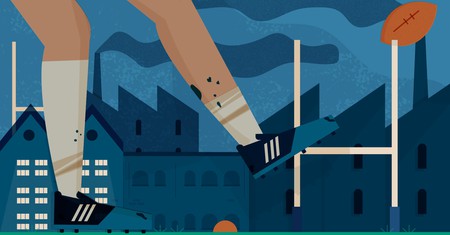 Of the 24 rugby league teams that currently make up the England’s top two divisions, only four are based outside of the north of the country. How has this sport become so embedded in this region’s identity?

A schism has existed in rugby for over a century, brought about through a combination of forces – money, class and professionalism. Both codes in rugby – league and union – carry stereotypes today, with union seen as the gentlemen’s game and league as a working class pursuit. This owes much to the specificity of rugby league’s homeland – a corridor of country stretching from Merseyside in the northwest to east Yorkshire. This has has barely altered since league’s inception. But why?

Just four teams in Super League and the Championship hail from outside this part of the world. Three – Catalans Dragons, Toulouse and Toronto – compete because professional rugby league doesn’t exist closer to home. The London Broncos are the solitary domestic team outside of the code’s heartland.

Further down the pyramid it branches out a little further, but still includes teams from Bradford, Oldham, Leeds, York and Doncaster. While small, regional towns – Batley, Featherstone, Barrow and Halifax – produce some of the county’s top clubs and make up key parts of rugby culture in the area. Rugby union, by contrast, is played far wider around the world. 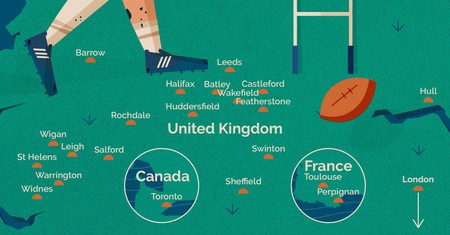 In the late 19th century, rugby split, essentially over money and the willingness of certain clubs in the north to pay their players. Historian Tony Collins says: “Over the course of a decade a sort of civil war broke out in terms of paying players. The northern clubs allowed players to be paid for playing the game and, perhaps more importantly, had ‘broken time payments’ – compensation for any time they had to take off work through playing.”

In 1895 the “Northern Rugby Football Union” (NRFU) was formed with a quest for professionalism. Over the next ten years the NRFU also gradually adopted rule changes – 13 players instead of 15, no line-outs, no scrums and a different scoring structure – which ultimately led to it being considered a different sport.

At the time, Leeds official Harry Sewell said: “We want to do away with that scrummaging, pushing and thrusting game, which is not football, and that is why I propose to abolish the line-out and reduce the number of forwards to six. The football public does not pay to see a lot of scrummaging”.

In the north of England the game was popular among the working class because they could afford to play it, while in the south it was the middle and upper class that played union, wealthy enough not to have to worry about it’s amateurism.

When sport began to cater to mass spectators in the 1920s and 30s, even with the popularity of football, this particular region had already built up a strong affinity with rugby league that has remained ever since. Similarly, union’s popularity in the likes of Bath, Bristol and greater London has also remained.

Sean Morris sampled both codes, and both regions. Having switched from union, he played for London Broncos, before moving to Wakefield. He says, “There was a strong community around the Broncos, but built from a small southern league community and northern diaspora, and is almost an island in the vastness of the capital. It’s a stark contrast to Wakefield, where the club and sport plays a significant role in the town’s community – it’s truly part of its fabric.”

“For some this might be the case, the anti-southerner sentiment perhaps runs deeper than the typical banter that a southerner will receive in the north,” says Morris. However, on the most part, my experience was that a north/south split is far less powerful than a sense of disenfranchisement or isolation driven by things much deeper than simple geography. 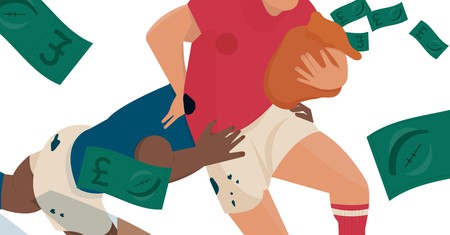 For Morris, his journey from union to league, and from the south to the north, caused more surprise than any negative sentiment, “What I experienced from teammates, coaches and fans was interest in my background and journey to Wakefield – a sense of ‘how did you end up here?’ ”

Collins says, “Because the game was founded over payments to working class players it’s always had an ideology of being egalitarian and open to everyone.”

So is the inclusion of clubs from abroad today an extension of this? The egalitarian notion that anyone can play, not matter where they are from? Not entirely. The south of France has had an association with rugby league for nearly a hundred years, while Toronto is an anomaly, with Canada having next to no tradition in the sport. The attraction is in its accessibility.

Collins says: “The low cost of entrance means owners who want run a sports team can choose rugby league as an easier option because entry into the market is far easier than football, or union – that’s what we’re seeing with Toronto.” This, coupled with a general feeling that the sport has been sluggish when it comes to embracing commercial opportunities, has seen Super League open its arms to foreign clubs.

Further afield, in South Africa, New Zealand and Australia, where rugby union flourished, it is only in the latter where league blossomed. New Zealand didn’t have the same industrial base, and apartheid in South Africa meant that the sport became associated with Afrikaans and the white population so a perceived racial unity overcame any differences associated with pay. Australia, however, had an environment that mirrored England, with a working class that wanted to be financially rewarded for playing the game.

The rugby union bodies in Australia were affiliated with their English counterparts, and so enforced amateurism on its players. Union’s popularity swelled, but as the pockets of the governing bodies followed suit, rather than those of the players, discontent set in.

When Dally Messenger, rugby union’s superstar of the day, switched codes in 1907 in search of financial reward, he took the crowds with him. This, along with the formation of the professional New South Wales Rugby League, saw Sydney’s huge working-class population latch onto rugby league and never let go. In the National Rugby League today, eight of the 16 teams are based in New South Wales, of which six are in Sydney.

This particular part of Australia fell in love with the sport and today the country represents the powerhouse in the international game. And yet, England teams, almost exclusively made up up of working class players born in Wakefield, Leigh, Castleford and the like, compete at the absolute elite level. It’s integral to who they are.