Why is Brighton the LGBTQ Capital of the UK? 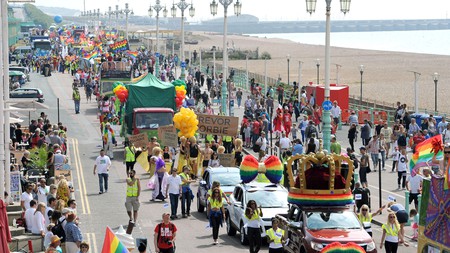 Brighton’s reputation as the UK’s LGBTQ capital has been over 200 years in the making and it’s a status most of the city’s residents are fiercely proud of. Here’s a short history of how Brighton came to be synonymous with commitment to tolerance and diversity for residents and visitors alike.

From humble beginnings as a neolithic encampment, Brighton’s transformation from fishing village to stylish seaside resort is perhaps best symbolised by the unique Royal Pavilion, which sits at the heart of the city. Under construction during the Napoleonic Wars (1803-1815), it’s understood that the influx of soldiers to Brighton during these years coincides with the first recorded LGBTQ (Lesbian, Gay, Bisexual, Transgender and Queer) history in the community.

Throughout the 19th and early 20th centuries, its proximity to the capital and the expansion of easy, regular transport to the seaside saw Brighton become a clandestine destination for those retreating from London. In the 1930s, gay and lesbian bars and pubs spread throughout the city – and after World War II, whispers of Brighton’s unique diversions spread to others looking for a safe space to explore their sexuality. 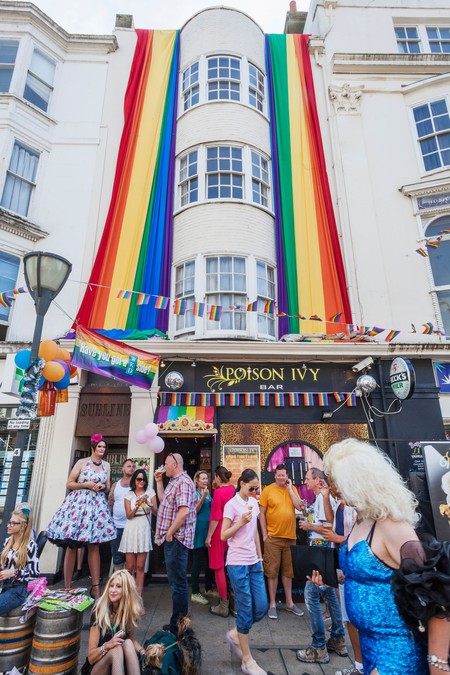 Kemptown is the beating heart of Brighton’s vibrant LGBTQ scene

Today, it’s thought that 11-15% of all adults in Brighton identify as gay, lesbian or bisexual. It’s easy to see the influence of the LGBTQ community in nearly every street, particularly in Kemp Town. Here, long-established pubs like The Bulldog, The Camelford Arms and The Marlborough cater to different segments of the LGBT population, including those who identify as non-binary.

But it’s more than just bear pubs and Drag Kings driving the city’s LGBTQ scene; there is an abundance of vital services such as the Allsorts Youth Project, the Brighton & Hove LGBT Switchboard and the Sussex Beacon offering support and driving education and acceptance throughout the community.

The true spirit of Brighton’s LGBTQ community comes to the fore each year in early August during Brighton Pride, the UK’s largest – and arguably, most sparkly – pride festival. Drawing revellers from around the country, the festival welcomes hundreds of thousands to the city with a simple message: “We are family”. The weekend-long party kicks off with a vibrant, bawdy parade that winds through the various city ‘villages’, culminating in a party in Kemp Town, with live music and cabaret in Preston Park and even a dog show. 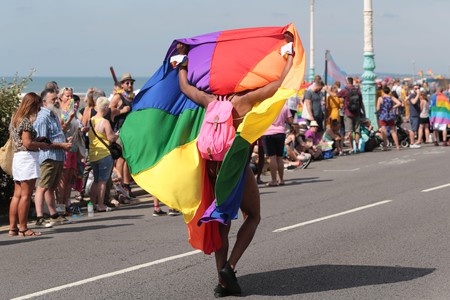 The fabric of Brighton is woven with inclusivity, equality and tolerance – creating a strong sense of community. It’s part of what makes the city so special and open to all.