Why Anne Brontë is the Great Family's Forgotten Genius

If you’ve ever studied English in anything remotely resembling a controlled environment, odds are you know the Brontës—or have at least heard about them. It doesn’t take a die-hard devotee (however entertaining it is to have one around) to grasp that their story is an indelible part of the notion of Victorian England. You may recall their literary genius, which has come to define the 19th century in the same manner as that of Jane Austen, Charles Dickens, and George Eliot (to name the obvious few). Or remember the family’s tragic demise, mythologized early on by Elizabeth Gaskell in The Life of Charlotte Brontë, published two years after that last sibling’s death: dissolute drunken Branwell gone at 31, followed by his passionate, introverted sister Emily at 30, resignedly ill Anne at 29, and determined Charlotte, who held it all together until the age of 38.

Much has been made of two of their novels in particular—Emily’s Wuthering Heights, widely hailed as the great love story of its age (though it would be unfair not to add that it’s a lot more than that), and Charlotte’s proto-feminist, proto-modernist classic Jane Eyre. While we can confidently claim not to require further reassurance of their worth, it may be, as Samantha Ellis convincingly argues in her new book, about the third sister’s output that our attentions deserve redress. Anne Brontë published two novels of her own in the last three years of her life: Agnes Grey and The Tenant of Wildfell Hall—and both ought to be taken with the same awe and seriousness as her sisters’. Far more than just companion pieces to the Brontë canon, they are witty, controversial, dark insights into Victorian life. 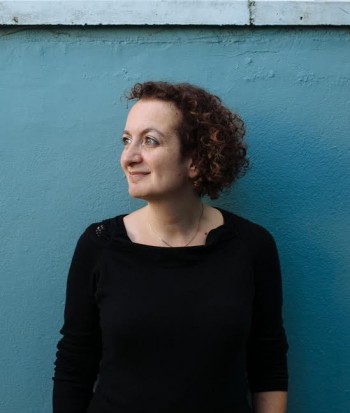 Traveling from Brontë vista to Brontë vista—that is, from the family’s Yorkshire home to the native Ireland of their father Patrick, with brief stints by the North Sea and in London—Ellis intersperses snippets of her own life within her biography of Anne. While this makes her book very much in the vein of modern nonfiction (see Olivia Laing, or Ece Temelkuran), Take Courage: Anne Brontë and the Art of Life‘s author has the tact to keep her presence subdued, appearing solely as if to move the book onward; the focus is on Anne’s life and work, and rightly so.

Anne was born in 1820, the youngest of six children; her mother Maria died a year later, followed in 1825 by the two eldest siblings, killed by neglect and cruelty while staying at that boarding school—the one that would provide the basis for Jane Eyre’s. Affected, no doubt, by this fraught entry into life, she joined her brother and sisters in the creation of an imaginary world (“like soap-opera writers”), a game replete with Byronic action and high drama:

Anne would keep playing at it until 1834, when she and Emily broke away from Angria’s “retrograde values” and invented another country, the famous island of Gondal—“all mists and moorlands drear, / And sleet and frozen gloom” (or so wrote the latter in 1843). The two sisters would compose fiction and poems based around it for the rest of their lives, a marked break from the Romantic sensibilities of Charlotte and Branwell, who got out of their world when they reached adulthood:

“In Angria, wars meant parades and glory; in Gondal, they brought disillusionment and death. There were no genii to ‘make alive’ or conjure up a happy ending. Anne and Emily’s characters have free will, make mistakes, face the consequences, die. They aren’t wooden; they feel real.”

It is distressing to read how the majority of scholars and biographers interested in the Brontë mythos thought of Anne as little more than a diffident presence, if they acknowledged her at all. Ellis nonetheless surveys their treatments in detail, taking them on one by one, demonstrating that their version of Anne—all meekness and passivity—is very much lacking in substance. If they simply “ignored Anne,” or, like Victoria Moore in 1936, made claims that she “played the Gondal game passably, and applauded sweetly when Emily invented situations,” the true picture was in all likelihood markedly different. 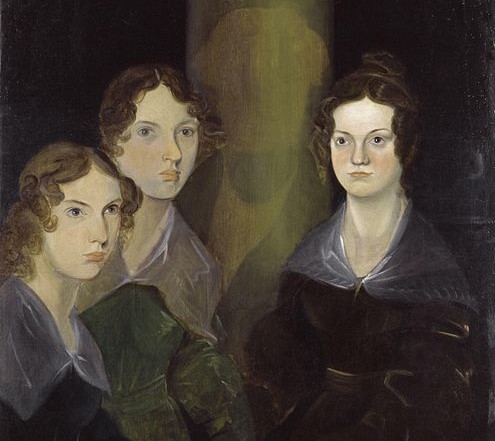 Anne, Emily, and Charlotte (with Branwell painted out). Painted by Branwell Brontë, circa 1834, and now at the National Portrait Gallery | WikiCommons

Despite having never left home, Anne took up employment as a governess in Blake Hall, less than 20 miles away, at the age of 19. The rest of her cash-strapped family was at the time jobless, save for her father Patrick, a priest. Branwell, Emily, and Charlotte had all returned disappointed from endeavors in neighboring towns—the first was a failed painter, the other two hateful teachers. Fired after eight months, Anne did not despair, and found another position worth twice the pay shortly thereafter. She would end up staying at it for the next five years.

Her first novel, Agnes Grey, was begun around that time, and “sticks close to the facts of Anne’s life.” Like her, Agnes is a poor family’s youngest daughter, who decides to go and earn a living when household fortunes hit rock bottom. Her wish, like Anne’s, is to take matters into her own hands:

“To go out into the world; to enter upon a new life; to act for myself; to exercise my unused faculties; to try my unknown powers; to earn my own maintenance, and something to comfort and help my father, mother, and sister, besides exonerating them from the provision of my food and clothing; to show papa what his little Agnes could do; to convince mama and Mary that I was not quite the helpless, thoughtless being they supposed.”

More important, perhaps, is the fact Agnes Grey turned into an indictment of the working conditions inflicted on governesses. Written before Charlotte’s Jane Eyre (though published two months later), Anne’s unabashed realism differs from her sister’s more famous take. It features no employers like Mr. Rochester, to love Agnes ardently; it contains no nice, devoted pupils, and no complicit servants. The experience is instead much the same as Anne’s: children either cruel or conceited, awful pay, and shabby, classist parents. Yet, just like her, Agnes sticks with it for years (Anne was eventually forced to quit her job after Branwell had an affair with her employer’s wife), finding success with what can only be described as a modest denouement: a love-filled marriage to a country parson.

Though its publication in 1847—immediately after Jane Eyre—ensured negative comparisons and minor sales, Ellis doesn’t let this distract from the importance of Anne’s work. This novel was ahead of its time in its attack on class injustice, and accompanies Anne’s first stirrings of feminist consciousness. Noting in her diary in 1868 that she had read Agnes Grey, the suffragist Lady Amberley added that she “should like to give it to every family with a governess and shall read it through again when I have a governess to remind me to be human.” 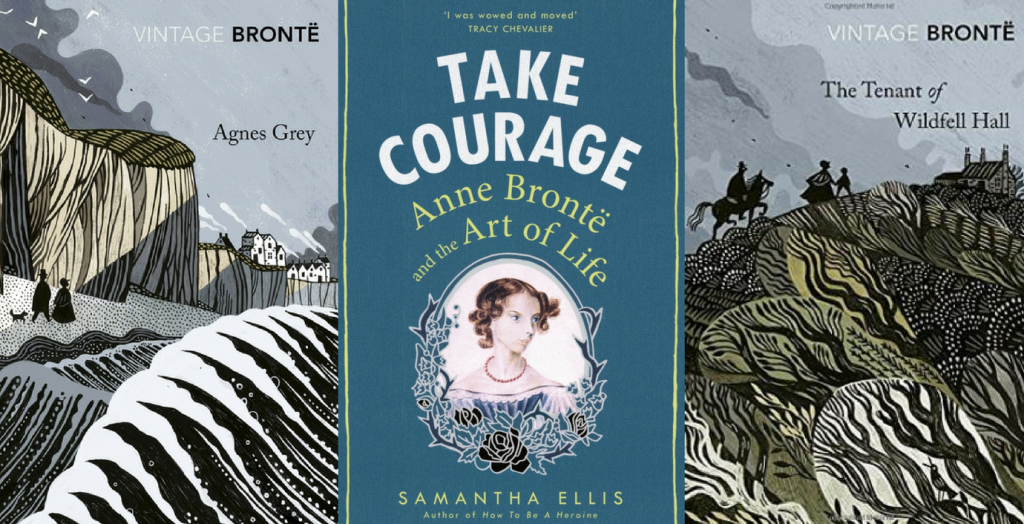 The Tenant of Wildfell Hall

If popular response to Agnes Grey did not quite attain that given to Jane Eyre, Anne’s next effort, published a year later in 1848, ended up causing just as great a furor. Certainly the most groundbreaking Brontë novel, if not for its esthetic, then at least for its subject matter, The Tenant of Wildfell Hall came as a shock to literary society: it was “a succés de scandale,” in Ellis’s words. Yet to reduce it to that would be to miss the point entirely.

Epistolary in nature, the novel follows two narratives. Roughly a third of its length, divided between the book’s opening and its closing, centers on Gilbert Markham, a gentleman farmer in a small rural community. He becomes obsessed with the new occupant of nearby Wildfell Hall, a mysterious painter by the name of Helen Graham, who lives in apparent penury with her only child. The opening, notably, is tinted in a near-Gothic atmosphere—

“Wildfell Hall, a superannuated mansion of the Elizabethan era, built of dark grey stone, venerable and picturesque to look at, but doubtless, cold and gloomy enough to inhabit, with its thick stone mullions and little latticed panes, its time-eaten air-holes, and its too lonely, too unsheltered situation,—only shielded from the war of wind and weather by a group of Scotch firs, themselves half blighted with storms, and looking as stern and gloomy as the Hall itself. Behind it lay a few desolate fields, and then the brown heath-clad summit of the hill;”

—livened, somewhat, by the remarkable appearances of Gilbert’s brother, the unexpectedly comical Fergus (consider his first words: “badger-baiting”). The other two thirds are dominated by the extraordinary revelations of Helen’s past: She, trapped in a marriage to an abusive husband, has run away with her son to hide and make a living off her own art. In other words, Helen has flouted the most stubborn of Victorian conventions, and so for independence. 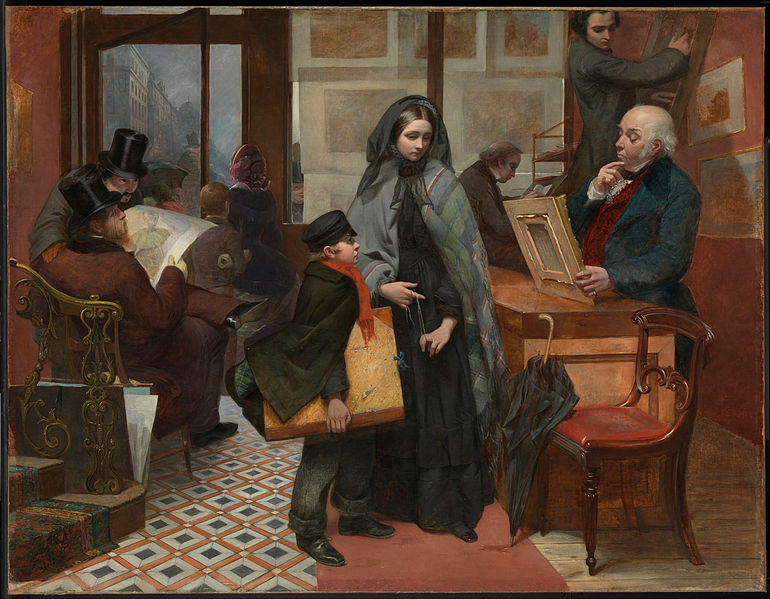 Nameless and Friendless, painted by Emily Mary Osborn (1857). Samantha Ellis makes the case that it was inspired by The Tenant of Wildfell Hall | WikiCommons

This is the kind of courage, and feminism (no ‘proto’ here), that is absent from the other Brontë sisters’ works, and in fact seems wholly unique for its time. The Tenant of Wildfell Hall profoundly shocked mid-19th century London society. Its plot, mingling intense scenes of marital cruelty with humor and a constant call for control over one’s life (to the point where Helen actually ends up proposing to Gilbert), cannot but make it a groundbreaking work of art. If this novel is a masterpiece, however, it is also because it is gifted with magnetic prose:

“But the night was long and dark: the snow heavily clogged the wheels and balled the horses’ feet; the animals were consumedly lazy; the coachman most execrably cautious; the passengers confoundedly apathetic in their supine indifference to the rate of our progression. Instead of assisting me to bully the several coachmen and urge them forward, they merely stared and grinned at my impatience: one fellow even ventured to rally me upon it—but I silenced him with a look that quelled him for the rest of the journey;—and when, at the last stage, I would have taken the reins into my own hand, they all with one accord opposed it.”

The novel went through two editions before Anne died in 1849, but wasn’t reprinted immediately afterwards—Charlotte, fearing censure, suppressed it. With nothing but a mutilated version = available for many years, the book remains to this day half-forgotten; the cut text is in fact still the most prevalent Tenant of Wildfell Hall in publication (like Ellis, I was aggrieved to find my own copy of the book was lacking, so to speak). The oldest sister, in that light, does not come out too well. It was Charlotte who described Anne as “long-suffering, self-denying, reflective, and intelligent,” with a “constitutional reserve and taciturnity [that] placed and kept her in the shade”—despite the fact that her novels were far ahead of their time. She is, as Ellis makes clear, more responsible than anyone else for her sister’s unfair reputation. Take Courage ought to rectify that: if talent and oeuvre are anything to go by, Anne is much more than the other Brontë.