The Top Things to See, Do and Eat on a Budget In York, England

York is one of the most beautiful cities in England with so much to do and see, from fantastic, eccentric shopping opportunities down The Shambles, to relaxing in one of the many pubs with a drink overlooking majestic York Minster.We take a look at what to see, do and eat in one of England’s best-kept medieval cities. 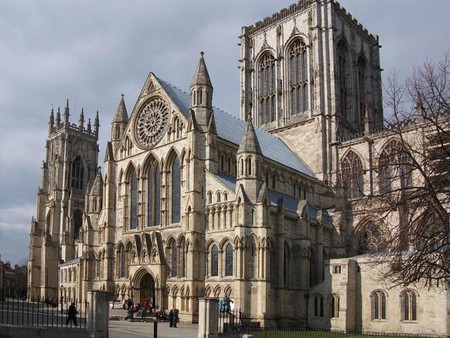 Stagger Up 275 Steps Through The Central Tower Of York Minster

The 275 steps up the 61m Central Tower of York Minster are narrow, a little windy and will leave you a little out of breath but what awaits you makes all the effort worthwhile. Following your ascent, you will reach the highest point in York, allowing you to see everything from red brick chocolate factories (e.g. Terry’s Chocolate) to the green Yorkshire countryside. There are little square ‘windows’ where you can compare helpful, annotated maps with what you can see before you. Be sure to make time to explore the rest of the cathedral too. York Minster is one of the largest cathedrals of its kind in Europe and one of the most beautifully decorated, famed particularly for its medieval stained glass windows, some of which are showcased in ‘The Orb’. Lastly, don’t forget to kiss your other half under the ‘The Heart of Yorkshire’ (located at the Great West Window) as local legend states that if you do, you will have true love forever.

Hop Aboard A YorkBoat City Cruise

You don’t have to be a boat fanatic to appreciate seeing York’s sights by boat. There are two places where you can board, at King’s Staith Landing or Lendal Bridge, and the staff were very easy-going about letting people off at either once the cruise was over. You will of course have plenty of opportunities to take great photos of York’s most famous attractions but actually what you may love more is hearing the stories about the local history and the hidden alleys or buildings you might not notice upon first glance. It’s a great thing to do whatever the weather and if you’re lucky, you’ll also get to see lots of York’s resident ducks and some of the rowers out training.

Walk the entire 2.1 miles of York’s historic medieval walls, so you can say that you’ve walked the longest city walls in the whole of England. It will take you between 1 ½ hours to 2 hours depending on your walking speed and you’ll get to see the tourist bits of York as well as those which are a bit more secluded. Some city walls are there to be marvelled at or simply photographed, however, York’s City Walls are an experience, allowing you to actually walk on them and learn about the great battles and history of this City. There are five main sections and there will be points where you can come off the walls and re-join at certain towers. There are even a few museums within the towers should you want to brush up on your history while on your visit. There are no set restrictions or paths so you can walk as little or as much as you want.

Clifford’s Tower, built by William the Conquerer in around 1068, presents an alternative for those who can’t face the York Minster steps to still be able to gain stunning panoramic views of York. Maintained by English Heritage, the remains are in great condition and it doesn’t take too long to look around, giving you plenty of time to see all the other sights afterwards. The Norman Castle is found at the top of a grassy mound and provides an up-close and personal view of what medieval times were like, a reminder of the wars and brutality. For example, it was previously used by arguably the most famous Tudor, Henry VIII, to showcase the bodies of his enemies and has also been used as a place to keep prisoners locked up.

Relive The Swingin’ Sixties At The Castle Museum

The 1960s, from the music, The Jacksons, Beatlemania, the birth of the mini-dress, the heavy fringes, the hippy movement, everything from this period has now reached an iconic cultural status. At York Castle Museum, there is an entire exhibit where you can reflect on the good times or for the younger generation, an opportunity to learn about this exciting time full of change of the positive kind. There are plenty of interactive sections of the museum, including the world-famous Kirkgate, which is eerily authentic. Every shop is based on a real business that existed during Victorian times, the adverts are replicas from real newspapers found in the archives, even the alleyway depicts York’s poor based on Rowntree’s survey in 1901. It’s different from any other museum that you will ever visit.

Stroll Down ‘The Shambles’

The Shambles is not to be missed, a small street in the centre of York that is renowned for atmosphere and bargains. It’s full of lots of quaint little buildings with black and white beams, crooked walls and bags of medieval charm, so it may come as no surprise that it was named as Google’s Most Picturesque Street in Britain back in 2010. As you walk, you’ll notice that the pavements are not in line with the road, but in fact are raised. Back in the olden days, butchers would be able to use the central lower part to get rid of the blood, whereas nowadays, it allows tourists to have a little more height when photographing the 15th century buildings. There are many tea shops which sell both tea bags and loose tea, not just Yorkshire Tea, but tea which comes from even the furthest corners of the world. Plenty of cafés and restaurants line the street too if you fancy a nice brunch or lunch. The street itself dates back to the Domesday Book, meaning it has been around for at least 900 years.

Treat Yourself At Betty’s Café And Tearooms

You can always tell that somewhere is good when there is a queue down the street to get in, as is the case with Betty’s. While there are other Betty’s, the flagship tearooms in York are spectacular, an extraordinary mix of classic Britishness and homeliness. Choose a delectable treat from the cake trolley and couple it with Betty’s English tea. There is both a floor at ground level and an underground level. Unlike other underground cafes, which can often feel claustrophobic, Betty’s feels like being inside a first-class passenger on a world-class cruise liner, sampling the finest patisserie on deck.

Create Your Own Chocolate Bar At York Chocolate Story

York Chocolate Story is not just a shop, a factory or an educational outing, but all three. If you start the tour you will be required to do the whole thing, there are no opt-out points. It begins with interspersed facts about the history of chocolate with audio-visual images and clips as well as samples of liquid chili chocolate, samples of chocolate pieces, in fact there is an abundance of generous samples. Part of the tour involves teaching you how to experience chocolate with all five senses and trying to guess what different chocolate tastes you can pick up. You are also allowed to craft yourself, with access to the moulds, sprinkles and of course, the melted chocolate to create your own chocolate bar. While this cools, you also get to see a real-life chocolatier create other chocolate truffles, with, naturally, more free samples. The whole place also has plenty of opportunities to use the interactive screens to learn more about how it’s made and particularly the names with have made York so famous for its chocolatey history, Terry’s and KitKat to name but a few.