What’s the Story behind the Manchester Bee Tattoo? 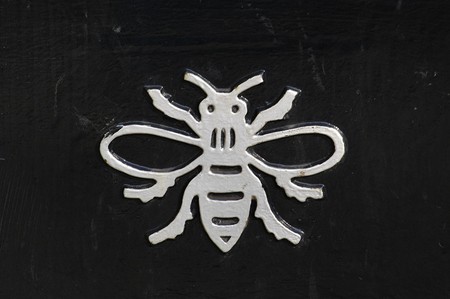 In the wake of the recent horrific terrorist attack in Manchester, you may have noticed that hundreds of city dwellers have been queuing up to get a tattoo of a bee in solidarity with their fellow residents and to raise money for the Emergency Manchester fund. It’s incredible to see a community such as that in Manchester come together in their darkest hour, inspiring love instead of hate. But why the bee?

In tragic times we come together! Just a few of what i've done over the past week! Keep up the support! #manchesterbee #manchesterbeetattoo

Even long-time residents of the city may not have previously realised that the worker bee was the city’s emblem. But if you look closely, the Manchester bee appears on everything from everyday bins to beautiful tiles in the Town Hall, a constant reminder of the city’s industrial past.

#westandtogether great piece by @amyconeyart in memory of the 22 people we lost in the #ManchesterArena bombing. It's lovely to see how everyone has come together in support showing the #Mancunian spirit! #mcruk #wearemanchester #ManchesterUnited #unity #mcr #art #mural #memorial #ilovemcr #manchestergraffiti #manchesterstreetart #clouds #cloudporn #Manchester #mcr #bees #onelovemanchester #ilovemcr #igersmcr #2017

Dating back to the 19th century, the bee has been synonymous with the city. Manchester was a key location in the birth of the Industrial Revolution and the symbol of the worker bee perfectly fit with the hive of activity that erupted at the time, as more and more mills opened and workers flocked to the city. Many of the mills were even named ‘beehive mills’ as the owners saw the obvious similarity between the workers in the factories and the worker bees in a hive.

Manchester’s coat of arms was granted to the city in 1842, featuring a striking array of detail that includes seven worker bees flying over a globe. This may only be a small part of the emblem (which also includes a ship in full sail, an antelope, a lion and a red shield with gold stripes) but it is the most iconic, symbolising how Manchester was a city of global trade.

The bees were already an iconic symbol of the city at the end of the 19th century, appearing in various ways on the structures that were built during this period. Perhaps most famously, worker bees appear in abundance throughout Manchester’s Town Hall, an impressive Neo-Gothic building that was completed in 1977. If you take a short tour of the building, the most impressive depiction of the worker bees is on the floor directly outside the Great Hall, where you will find the bees on a series of beautiful floor tiles.

Another iconic movement in Manchester at that time was the beginnings of the co-op. The Co-Operative Movement began in Rochdale in 1844 and their central store (constructed some years later) featured a beehive on its façade. As more and more co-op stores opened around the country, bees were carved into the walls of the buildings, leaving a constant reminder of the building’s original functions. Again, this association with the Co-Operative Movement symbolises the teamwork that we associate with a hive of bees.

In the wake of the recent terrorist attack, worker bee symbols appeared all across social media as people all around the world paid tribute to the victims and to the city. Almost immediately, the city’s graffiti artists began updating prominent works of street art with the inclusion of the bees.

Most notably, street artist Russell Meeham (known as ‘Qubek’) has been transforming the Northern Quarter into a tribute to the victims of the attack. He first adorned Stevenson Square’s iconic Outhouse structures with vibrant depictions of Manchester bees and two hands forming a heart, before later completing a huge mural on Oldham Street. Taking over the entire wall on the side of the Koffee Pot building, the artist has painted 22 worker bees to symbolise the 22 victims of the attack, swarming around a heart of honey.

These works of art, alongside the tattoos that many Manchester residents have got over the past few weeks, serve as lasting tributes to the victims and their families, while also showing solidarity for the city. The bees are iconic to Manchester, symbolising a hive of people that work together. In this difficult time, they’re demonstrating how the city still functions as a hive.