‘Unfriending’ Has Been Around a Lot Longer Than Facebook 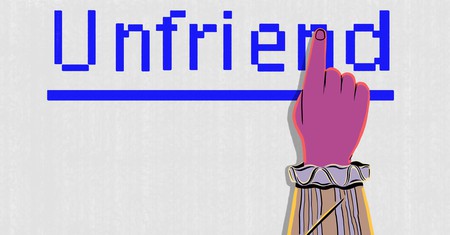 We all know what it’s like to be on the receiving end of a brutal ‘unfriend’ on Facebook, but if we’re honest with ourselves, it’s likely we’ve ‘unfriended’ just as many people in return.

The year is 2014. The Merriam-Webster dictionary has just unveiled its list of ‘new’ words that will be officially added. ‘Baby bump’, ‘crowdfunding’, and ‘fangirl’ have made the cut. So has ‘unfriend’ but, unbeknownst to most, ‘unfriending’ as a verb wasn’t invented by Mark Zuckerberg.

Defined as ‘to remove (someone) from a list of designated friends on a person’s social networking site’, it’s noted that the first year of recorded use was in 2003, which predates even Facebook and its ‘unfriend’ button.

However, the rival Oxford English Dictionary (OED) puts the use of ‘unfriend’ as starting much, much earlier, albeit with a different meaning. ‘Unfriend’ was once semi-synonymous with ‘enemy’ in the 13th century. Some sources put the date at a rather specific 1275, while the OED suggests it made its first appearance in the late 12th or even early 13th century Middle English poem Layamon’s Brut, that also used the word ‘muggle’.

As a noun, ‘unfriend’ does make sense; ‘un’ is a prefix with Proto-Germanic roots and it had a wide usage in Old English meaning ‘not’. So, ‘not friend’ = ‘enemy’.

The noun ‘unfriend’ didn’t morph into a verb until 1659 when it cropped up in a letter penned by the English clergyman, Thomas Fuller. Then, thanks to William Shakespeare, ‘unfriend’ as a verb appeared in Twelfth Night and these quotes from King Lear: ‘unguided and unfriended often prove rough and inhospitable’, and ‘Unfriended, new adopted to our hate.’

Shakespeare’s mention of ‘hate’ in association with the act of being unfriended does resonate in modern times. A 2013 survey found that unfriending someone typically occurs when the individual in question posts hate speech. Other actions leading to being ‘unfriended’ on Facebook include posting too much, posting about mundane things, bragging and sharing unprovoked opinions on polarising subjects. There are also, of course, the ‘unfriends’ that occur because a real-world friendship or romantic relationship has broken down.

Either way, the next time you feel the urge to click the ‘unfriend’ button, remember that you’re not doing anything original – Shakespeare, Middle English poets and 17th-century clergyman have been there and done it, too.