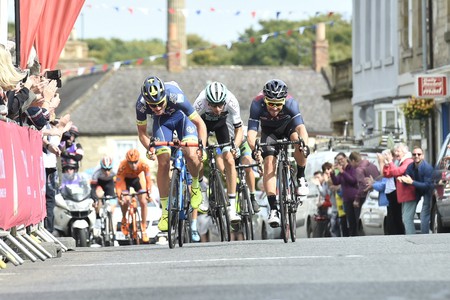 September sees cycling turn its attention to the Tour of Britain and sport’s elite racing across the country. For British riders like Tom Stewart, it’s the chance to ruffle the feathers of the top teams and flourish on centre stage.

The Tour of Britain is the country’s premier cycling event. The eight-stage race has existed in various guises since 1945, and along with the Tour de Yorkshire, it’s the standout race in men’s cycling in Britain.

It’s when the big boys roll into town. The likes of Team Sky, BMC and Katusha add their considerable clout to proceedings, but also it’s an opportunity for smaller teams and some of the supporting cast to shine under the spotlight. 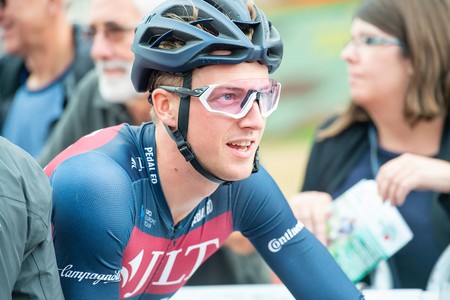 “We’re a British team, with British riders and sponsors in a home race,” says Doncaster-born Tom Stewart. “It’s a great opportunity to showcase what we’re about and the pressure is on.”

Stewart will be one of the team leaders for JLT Condor, one of the four British teams to have qualified for the race. The London-based outfit has a stable of riders predominantly from England’s north. “It’s very close knit. Each team is unique, with a different ethos and previous teams that I’ve been on have been a bit more business-like, but perhaps haven’t fostered the same friendships – particularly the relationship between the staff and riders. All the humour and sarcasm isn’t lost on anyone and it’s a fun way to race your bike.”

A greater level of intimacy is attainable at this level, one rung below the UCI World Tour (the elite tour for men’s road cycling) are the UCI Continental Circuits. For Stewart and his team, whose calendar includes races with smaller teams and the best amateur riders, entering the ring with some of the sport’s heavyweights provides greater freedom.

Stewart explains: “It’s not our race to dominate or our job to to control the GC (General Classification). At a domestic race we are the main team and that’s normally our job, but here we have free rein to make our own opportunities. We’ve got nothing to lose, we can gamble, we can take risks and not be so conservative. We go under the radar a bit and can attack a bit more. We won’t have a target on our back and the longer leash that bigger teams will give us means we can have more fun.” 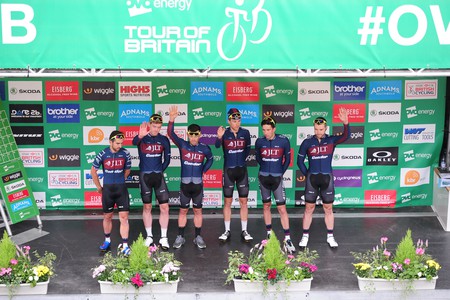 JLT Condor is essentially a London-based team. Both Condor Cycles and JLT Group (the team’s main sponsor) are based in the capital, but the 14 riders that make up their squad are dotted around south Wales, the northwest and (mostly) Yorkshire. With riders typically earning around £25,000 per year as a basic salary, they operate as a sort of feeder team to the elite level above. Past team members have gone on to earn contracts at World Tour level after competing at races such as the Tour of Japan, Tour of New Zealand and this British equivalent.

“It’s like football and we’re playing in the Championship,” says Stewart. “We’re doing just as much as the top teams with much smaller resources. They have bigger budgets, focusing on every tiny little detail and we try to replicate that as best we can. But their logistics are like a huge multinational company. In a team like that they’d be staff and riders that you might see once a year at a race and never see again. It’s a very different environment.” 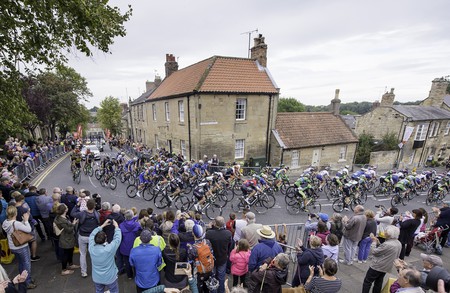 The peloton passes through Warkworth at the 2017 OVO Energy Tour of Britain. | © JLT –Condor

For fans of cycling the Tour of Britain is a chance to see the top-ranked domestic teams, as well as some of the premier riders in the world. Crucially, it is absolutely free for spectators and as a stage race it provides ample opportunity for crowds to go and watch in various parts of the country. In the same way that Stewart stumbled into cycling “almost by accident” after coming across it as a child, those new to the sport can watch elite sport quite literally pass their doorstep.

Stewart says: “Cycling can be sometimes be fairly inaccessible because of its complexity. Tactics can look a bit strange and it can be difficult for newcomers to understand what the hell is going on. But for this race you don’t need to pay or book a ticket. You can go up to riders, teams and staff and speak to them after the race. Plus seeing the speed and the climbs in the flesh will always amaze. I absolutely guarantee that you can have not the slightest interest in cycling and go watch the Tour of Britain and have a great day out.”

It’s an attitude not dissimilar to the one that Stewart adopts in the race itself. Having won the Tour de Normandie earlier in 2018, and as an all-rounder who is as comfortable in the sprints as he is on mountainous terrain or chasing breakaways, it’s very much a “nothing to lose” type of mentality.

“The course is quite hilly so it’ll be interesting to see how the GC race plays out early on. If we’re a bit further back I’ll have more licence to attack, get in breakaways and to be more creative. As a team we’ll be more reactive and there could be some chances for stage wins later on if we get overlooked.

“It’s the last big race of the year so it feels a bit like the final exam in a school term and the fact that it finishes in London means it’ll be a great spectacle.” And a big party? “If I’ve got any energy left…”