Top 7 Things To Do And See At Banksy's Dismaland

This autumn, the global graffiti master and maverick of the art world Banksy has created a revolutionary new experience in the British seaside town of Weston-super-Mare. Until September 27, the town’s derelict lido will be transformed into a temporary exhibition, satirizing the quintessential English summer holiday and offering a darkly twisted take on Disneyland pleasure resorts. Follow our guide to discover the darkest, dreariest, and, of course, dismalest, of what this artistic dystopia has to offer in a family day out that’s suitable for all*. 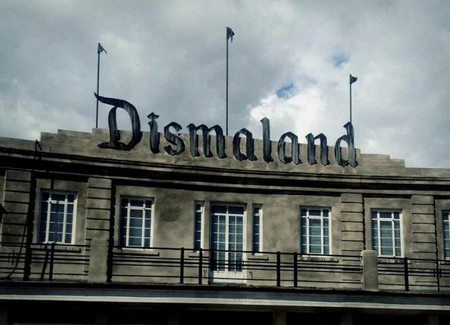 The ominous entrance to Dismaland | Courtesy of Marianna Hunt

The archetypal Disney image: a castle of fairytale proportions and fit for the most regal of princesses. This cliché has been defining the brand and evoking hysterical shrieks from young girls for more than 40 years. The towering centrepiece of Banksy’s Dismaland installation is the artist’s own take on the Cinderella castle which aims to shatter, metaphorically and also literally in parts, this fairytale fantasy. Twisting Gothic turrets covered in drab, grey rendering give the castle a ‘Beauty and the Beast meets USSR‘ feel that certainly can’t be faulted on originality. The castle’s interior plunges visitors into a world of shadow and hazy lighting before suddenly illuminating an upturned Cinderella carriage surrounded by journalists furiously snapping the road accident. The implications of the corpse of a blonde princess hanging from the carriage window, especially when coupled with the faceless paparazzi statues, will certainly not be lost on visitors just a handful of days after the 18th year anniversary of Princess Diana’s death. 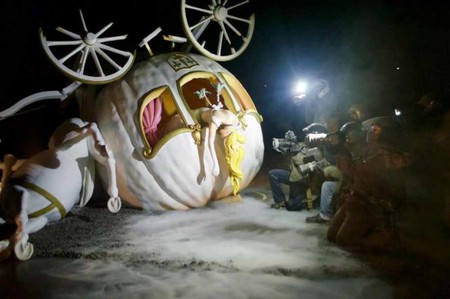 Get a taste of true customer service

A truly immersive experience, not one detail has been overlooked in Banksy’s Dismaland. Let yourself be charmed by the traditional disgruntled British spirit and famously mediocre quality of customer service. If being sullenly told to ‘get a move on,’ or receiving a morose ‘have a nice day,’ fails to put a grimace on your face, watch out. Fake guards patrol the area in search of such trouble (or rather, cheer) makers, ready at any moment to impose punishments, such as hopping on the spot for two minutes, for those refusing to get into the dismal spirit of things. All this, however, is only after you’ve managed to negotiate your way past the gimmick security search where being ‘too smiley’ or ‘wearing a disturbingly bright coloured top’ results in a minute long staring contest with a Dismaland employee. 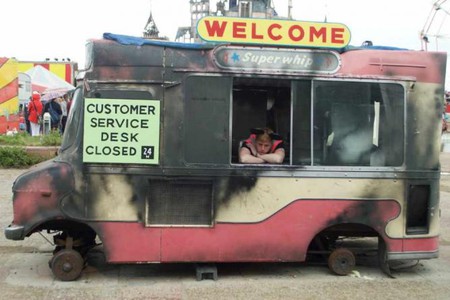 Take part in the most joyless funfair you’ll ever visit

Banky’s installation, in this archetypal resort town, satirically comments on the fruitlessness of funfair games fundamentally designed to rob visitors of their money. Dismaland‘s amusements (or rather amuse(less)ments) include an opportunity to attempt to knock an anvil over by throwing ping pong balls at it, a Punch and Judy show surrounded by rubble with the sign declaring ‘Warning: very small domestic war zone. Keep out,’ and a ‘hook-a-duck from the muck’ rescue attempt to remove ducks from glutinous oil spills. The social commentary doesn’t end there, however — far from it. A boating lake complete with remote-controlled boats, either teeming with faceless migrants or immigration control police boats stuffed with guns and armaments, and carousels with wooden horses butchered and waiting by crates marked ‘lasagne’ put sinister, 21st-century spins on traditional symbols of childhood and innocence. 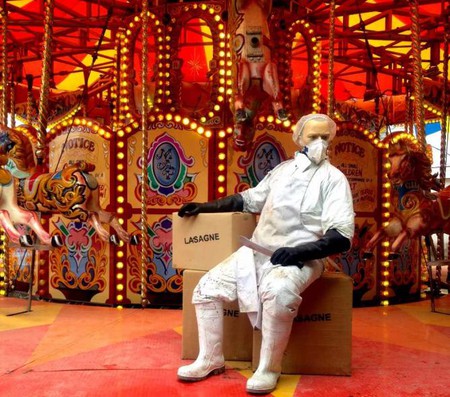 Dismaland’s indoor exhibition centre, chock-a-block with 21st-century masters and some of the world’s most cutting edge creative talents, acts as an incredible platform for the rising stars of the art world. Work by 58 artists from around the world, including Damien Hirst and Jenny Holzer, is displayed in a showcase that succeeds in bringing less mainstream, more conceptual art to a huge audience. 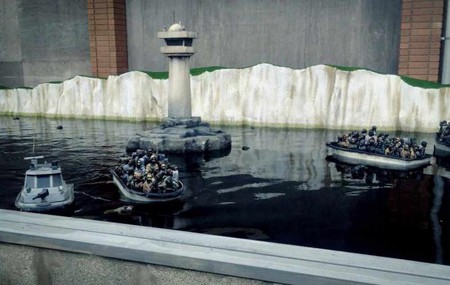 One of the installation’s ‘games’: model immigration and police boats floating on an ornamental lake | Courtesy of Marianna Hunt

Crossing the threshold of one of the sections of the indoor centre immediately submerses visitors into a totalitarian police state, overrun by armoured vehicles and uniforms, yet eerily devoid of citizens. The intricate detail of every tiny aspect of this model dystopia creates a frighteningly realistic result. There’s no need of villains or monsters in this Disneyland — the glaring spotlight roaming over the village, and swarms of faceless figures, point clearly at the enemy in this section. A fabulously ironic take on a traditional model village tourist brochure is handed out as you go round, providing thought-provoking reading on the details of police brutality for the journey home. 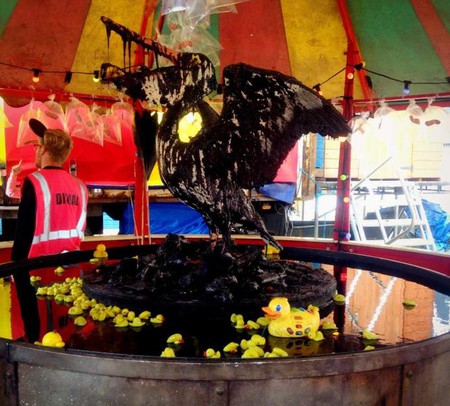 With a life-size installation of stuffed seagulls viciously attacking an elderly lady à la Hitchcock’s The Birds, Dismaland acts as a vivid reminder of the irritations of a typical day out at the seaside. But not content with visitors simply observing the experience, Banksy has ensured that your trip to Weston will be full of real-life nuisances, bothers, and winged pests aplenty. Employees in fancy dress seagull suits lurk behind visitors, primed to pounce and begin pestering and pecking the most unsuspecting of victims. So grab your binoculars, hide your tempting looking ice creams and chips, and get bird spotting at Banksy’s Dismaland. 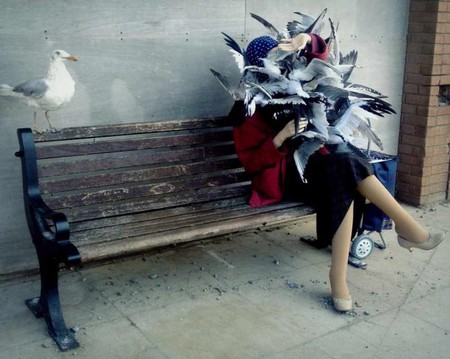 Musical performances are scheduled on Fridays, with line-ups including the likes of Massive Attack, Run the Jewels, and persecuted Russian punk band, Pussy Riot. If hip hop and protest Russian punk don’t sound like the perfect accompaniment to a family (un)friendly day out, both DJ sets and comedy nights will also be entertaining visitors on a number of Fridays.

Despite its dismal façade, Banksy’s exhibition has already had a marked effect in revitalising the town of Weston. The town is typical of many British seaside resorts, desperately trying to conceal their seedy underbellies as they are gradually eclipsed by package holidays and cheap exotic escapes. The paradoxically positive effect of Dismaland in allowing this relic of a defunct era to once again bask in the dazzling light of its heyday adds yet another level of irony to Banksy’s thought-provoking installation.