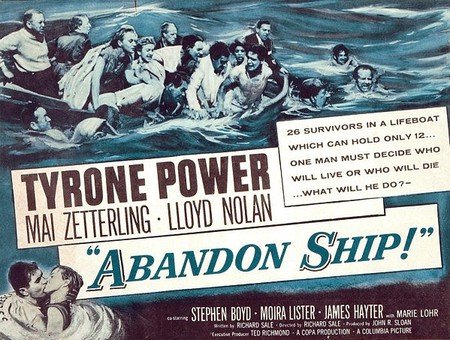 A single location; a single problem; a definite deadline – one-room films provide the budding filmmaker with all the basic tools of cinema at its most gripping. We take a look at ten British films set in one room.

Most importantly, the one-room premise is cheap – without the seemingly infinite budget enjoyed by Hollywood, the British film industry has frequently turned to this simplistic setup to produce some of the most imaginative examples to date.

Abandon Ship brings you to the Atlantic Ocean where audiences can enjoy a suspense thriller perfectly summarised by its log line – ‘14 of these survivors must be cast adrift! Which will the Captain choose?’. Stranded in an overcrowded lifeboat after the sinking of a luxury cruise liner, faced with the prospect of an incoming hurricane and dwindling food supplies, Executive Ship’s Officer Alec Holmes (Tyrone Power) is forced to make life and death decisions. Raising intriguing ethical conundrums, Abandon Ship is uncomfortable but essential viewing.

A blindsiding opening, a stomach-flipping twist and vivid, complicated character relationships – Neil Marshall’s action horror has the makings of a classic and has been lauded as such. The Descent traps its all-female cast underground after a caving expedition goes wrong. Searching for a way out proves deadly, owing to the claustrophobic darkness, re-emergence of emotional baggage and… a surprise. A British horror director to get excited about, Marshall handles the scares beautifully to keep the audience enthralled right up to the crushing ending.

Before The Descent, Neil Marshall directed Dog Soldiers, a more riotous affair supplanting a band of female climbers with male soldiers and bumps-in-the-dark with werewolves. Dog Soldiers takes place almost entirely within a small farmhouse in the middle of the Scottish wilderness, Marshall gradually reducing the field of play as the film advances towards a genuinely startling twist. As with The Descent, it is the characters and relationships within the military unit that elevate a B-movie premise to a re-watchable horror.

Topping the list, thanks to its complete adherence to the one-room format, Exam depicts a ‘dream job’ interview and the eight candidates who only need to do one thing to succeed – if they can figure out what that one thing is. Trapped in a windowless room with a blank question paper and seven strangers, the tension mounts as their motivation, credentials and loyalties come under scrutiny. Ultimately, a film that hinges on one question – ‘what is the question?’ – needs a great answer, and some viewers may be left unsatisfied. Despite this however, Stuart Hazeldine undoubtedly gives a master class in the micro-budget one-room thriller.

Featuring familiar faces from the field of British comedy – Julian Barratt, Reece Shearsmith and Michael Smiley – A Field follows a group of 17th century Civil War deserters as they are captured by an evil alchemist and forced to hunt for his treasure. Beautifully shot and featuring some extremely artistic camerawork, the film asks for blind faith in terms of plot, but has been hailed by many as a cinematic masterpiece. Love it or hate it, husband/wife directing and writing team Ben Wheatley and Amy Jump have created something truly extraordinary.

Robert Newton of Long John Silver fame (Treasure Island, 1950) stars as Dr Clive Riordan, the vengeful husband seeking retribution against his wife’s lover. Whereas Sleuth centred on the confrontational aspect of a similar scenario, The Hidden Room focuses on the revenge preparation. Approaching crime from the perspective of premeditation proves fascinating, whilst limiting the location to Riordan’s laboratory allows for in-depth probing into the psyche of a killer in a fantastic film noir.

Forget one room – try one car. In Locke, Steven Knight places Tom Hardy – as by-the-book construction site foreman Ivan Locke – on a literal and metaphorical journey towards a decision that will change his life forever. The action (or lack of) unfolds in real time, all dialogue taking place by phone. The film is expertly paced, remaining compelling despite essentially comprising of a man driving a car for 90 minutes. Film theory purists may criticise the film for lacking a main character arc or clear inciting incident but whether flawed or groundbreaking, this is a unique venture.

For his feature debut, Duncan Jones tells the story of Sam (Sam Rockwell), a Lunar Industries employee harvesting fuel on the moon, accompanied only by intelligent computer GERTY – voiced by Kevin Spacey. A low-budget sci-fi psychological thriller, Moon takes place in one lunar station and with one actor, albeit as multiple characters. As Sam endures an existential crisis against a minimalist lunar landscape, the audience cannot help but be gripped by his plight.

Adaptations of theatre productions lend themselves to one-room films and Sleuth is a masterful example of this. Cinematic heavyweights Laurence Olivier and Michael Caine (both nominated for the Best Actor in a Leading Role Academy Award) portray the crime-writing jealous husband and his wife’s young lover, pitting wits against each other in a layered cat-and-mouse thriller. With only one location – the family home – it is the acting and plot that take centre stage here, as the schemes of both men interweave for a gratifying conclusion.

Nominated for the 2007 Academy Award for Best Direction, winner of the BAFTA for Best Direction and BAFTA nominee for Best British Film and Best Screenplay, United 93 portrays – in real time – the events aboard United Airlines flight 93 on 11th September 2001. Whilst cutaways to the American Air Traffic Control rooms provide factual detail, it is on board that we feel the pressure build. The use of real-life airline employees and official terms imbues the production with an added sense of gritty realism. Emotionally draining, Paul Greengrass’ one-cabin film lingers with the viewer long after the inevitable yet devastating climax.