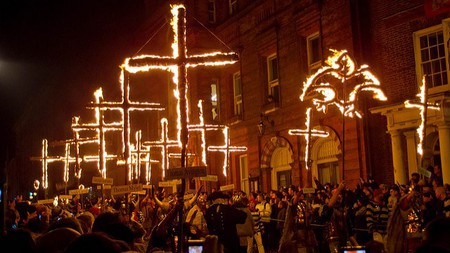 Hurling flaming tar, wearing costumes and watching hundreds of fireworks exploding simultaneously might not be everyone’s idea of a good night out.

But for the tiny town of Lewes in East Sussex, enthusiastic bonfire night celebrations are a 164-year-old tradition and a way to celebrate bonfire night.

Bonfire night (or fireworks night, or Guy Fawkes day) is an English tradition that celebrates the foiling of the 1605 Gunpowder Plot, when a group of men plotted to blow up the Houses of Parliament. 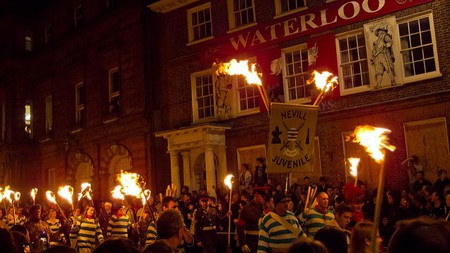 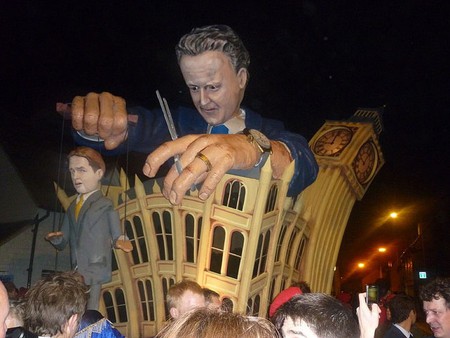 They smuggled 36 barrels of gunpowder into the basement of the famous landmark, but Guido ‘Guy’ Fawkes was discovered moments before the fuse was lit.

Bonfire night is celebrated annually on 5 November throughout the UK, with many attending or hosting fireworks displays and bonfires.

The town of Lewes takes the tradition even further. The event not only celebrates Guy Fawkes day but commemorates the memory of 17 Protestant martyrs from the area who were burned at the stake for their religion during the Marian Persecutions, a series of religious persecutions which took place after Mary I became Queen of England. 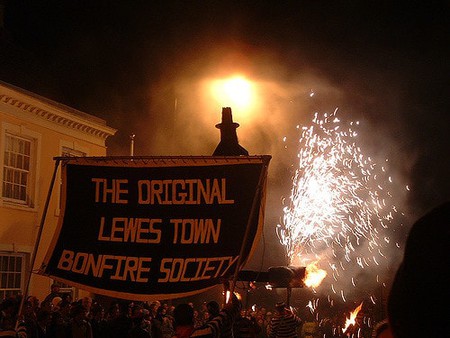 It’s that time of year and can’t help but reflect on the amazing The Lewes Bonfire Night, which is the biggest Guy Fawkes Night celebration in the world, and now in its 164th year. There is a Grand Procession that runs through Lewes with costumed paraders brandishing fire and sticks. The event then divides into six with each of the six Lewes Bonfire Societies hosts a bonfire and their own fireworks show. #learn #knowledge #didyouknow #interestingfacts ✅ the population of Lewes is 16,000 people and on Guy Fawkes Night that can get to over 80,000 ✅This annual tradition is a way of remembering the events of November 5th 1605 when a plot to blow up the Houses of Parliament, killing all inside it including the King, was foiled. One of the most famous conspirators of what became known as the Gunpowder Plot was Guy Fawkes. ✅Guy Fawkes (13 April 1570 – 31 January 1606), also known as Guido Fawkes, the name he adopted while fighting for the Spanish. ✅Fawkes converted to Catholicism and left for the UK, where he fought in the Eighty Years War on the side of Catholic Spain against Protestant Dutch . ✅He travelled to Spain to seek support for a Catholic rebellion in England without success. He later met Thomas Wintou, with whom he returned to England. ✅Wintour introduced Fawkes to Robert Catesby, who planned to assassinate King James I and restore a Catholic monarch to the throne.

To celebrate, the town carries 17 burning crosses through the town, one to represent each martyr, and a wreath for them is laid on the town memorial. There are seven bonfire societies, with each area of the town represented by street parades of people who live there. Each society has a different traditional costume, ranging from striped jumpers to medieval dress.

Up to 80,000 people descend on the small British town, with streets and train stations closed to prevent overcrowding. The entire town is closed to cars as the parades descends upon every street. Every year sees multiple injuries from the burning crosses and fireworks that are let off. 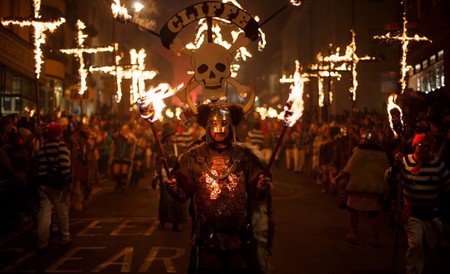 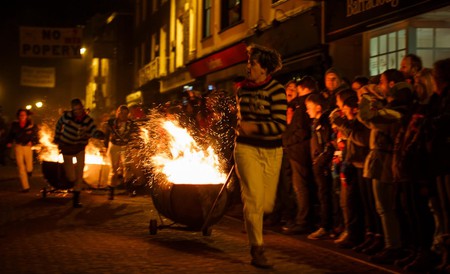 Burning barrels of tar are pulled through the streets | © Lee Chrismas

Burning barrels of tar are pulled through the streets, flaming crosses and torches are carried by parade participants and ‘bangers’, small fireworks which spark and crackle loudly when thrown at the ground, are tossed into the roads.

A large part of the celebrations involve the parading and burning of effigies of noteable public figures. Unpopular public figures, commonly politicians, are made into enormous models which are then carried by the crowd through Lewes.

It’s a bacchanalian night of fire and celebration, culminating in five simultaneous huge firework displays and large bonfires put on by the bonfire societies. The effigies are destroyed by a combination of being exploded with fireworks and being burned on the bonfires. The celebrations go on late into the night.

The effigies that will be burned are kept secret each year, being transported through the town under cover so their identity remains secret until they’re unveiled during the parade. Past effigies have included Donald Trump. Vladimir Putin, Kim Jong Un, David Cameron (holding a pig’s head), Alex Salmond, Angela Merkel and Theresa May.

A model of Pope Paul V, who was the pope at the time of the Gunpowder Plot, is also burned every year.

It’s a mystery who it’ll be this year, but we can think of a few contenders…