This Is Radiohead's Most Depressing Song According to Science 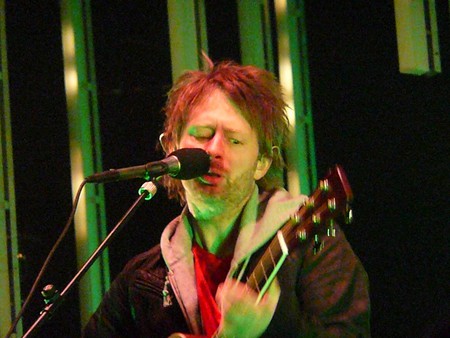 Radiohead will be playing on Friday | © Flickr/angela n.

Through the decades, Radiohead has become the apotheosis of music that is brooding, heartbroken, and, often times, outright depressed. You probably aren’t going to hear Radiohead at many parties unless it’s a sweet remix (RAVE-iohead, amirite?).

There are many forms of melancholy, and whatever sorrows you might encounter — a break up, a temporal existential crisis, a Nicolas Cage nightmare — there’s a Radiohead song that fits just right. But when all hope for happiness in this life is inevitably lost, which of the Oxfordshire quintet’s songs do we turn to as the most miserable muck of the bunch?

While it’s a fair argument to claim this is largely a matter of the beholder, one Radiohead super fan named Charlie Thompson decided to apply a scientific approach to determining the band’s melancholic meridian. Writing on his personal blog, Thompson explains how Spotify measures each song’s “valence,” aka how happy or sad it is in regards to its musical composition. As written in the streaming service’s Web API:

Next, Thompson turned to Genius to pull data on frontman Thom Yorke’s lyrics, analyzing the portion of words of each song as they pertain to sadness. Having gathered all the information he needed, Thompson then created what he refers to as the “gloom index,” which he defines as “the average of valence and the percentage of sad words per track, weighted by lyrical density,” or…

And the winner is: “True Love Waits” off of the band’s most recent album, A Moon Shaped Pool. A track that has been heard since 1995 during live sets and their 2001 live album, I Might Be Wrong: Live Recordings, its lyrics include classic Yorke-ian lines such as “I’m not living / I’m just killing time,” and “And true love waits / In haunted attics.” In fact, according to Thompson’s findings, Radiohead’s 2016 release is by far the group’s most dismal drop, save single “Burn The Witch.”

Following behind in the top 10 most depressing are tracks “Give Up The Ghost,” “Motion Picture Soundtrack,” “Let Down,” “Pyramid Song,” “Exit Music (For a Film),” “Dollars & Cents,” “High and Dry,” “Tinker Tailor Soldier Sailor Rich Man Poor Man Beggar Man Thief,” and “Videotape.” Thompson even created an interactive chart of Radiohead’s nine studio albums and where their songs sit along the “gloom index.”

While Thompson’s work is a dispiriting delight to browse through, we are having a hard time accepting that the crushing ennui of Kid A‘s “How To Disappear Completely” doesn’t even break the top five.

For a more technical breakdown of the Thompson’s science, head over to his blog.