The UK’s 10 Most Unusual Festivals 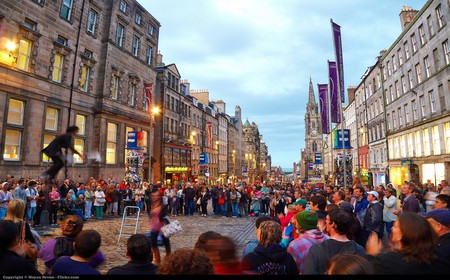 Find out about the most bizarre events and festivals that take place in the UK, from fireball throwing to cheese rolling. 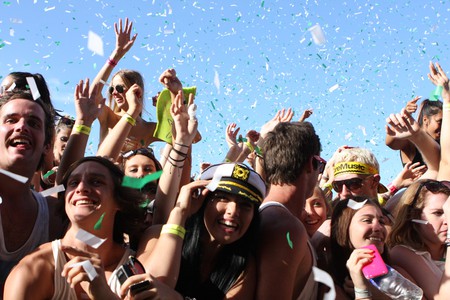 Ostensibly a religious event marking the biblical day of Epiphany, Twelfth Night celebrations in fact contain strikingly pagan elements that can be traced back to pre-Christian Midwinter feasts. This pagan backstory is apparent in traditional Twelfth Night characters such as the sinister Holly Man, a festive variant on the Green Man, a personification of vernal renewal. At the Twelfth Night festivities at London’s Bankside, the Holly Man is borne along the Thames in a small boat before joining the crowds for the ‘wassails’, or traditional toasts with mulled wine. The Bankside festivities also incorporate a traditional Mummers Play – an enactment of the quasi-religious story of St George and the Dragon – and the crowning of the King Bean and Queen Pea, two audience members lucky enough to find a legume in their Twelfth Night cake. 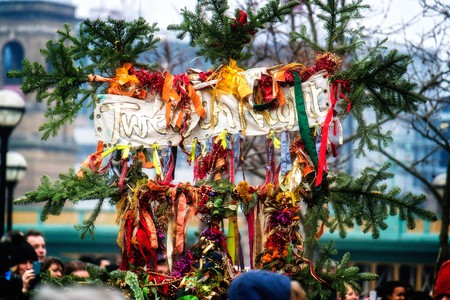 On the last Tuesday of January every year, the menfolk of Lerwick put on horned helmets, light flaming torches and stride through the streets to set fire to a longship. Up Helly Aa, Europe’s biggest fire festival, draws crowds from around the world keen to witness a seemingly authentic Viking celebration in this most Scandinavian part of the UK (Shetland was part of Norway until the fifteenth century). In fact, Up Helly Aa has no direct Viking roots, having developed in the late 19th century as a sort of novelty New Year party. This relatively recent provenance doesn’t prevent thousands of tourists from descending on Lerwick to see the day-long celebrations, which begin in the morning with a march and end with 900 burning torches being launched into a replica Viking ship, followed by a ceilidh.

Up Helly Aa is held every year on the last Tuesday of January. 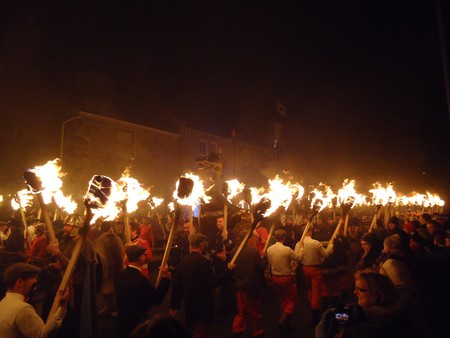 On Shrove Tuesday and Ash Wednesday every year, inhabitants of the small town of Ashbourne take part in what is possibly the world’s biggest, longest football game. The entire town is transformed into a pitch, and men, women and children divide into two teams of over 100 players. The game itself, which can last up to eight hours, is not football as we know it but a complicated endeavour known colloquially as ‘hugball’: goals can only be scored by a predetermined player, balls are grappled more often than kicked, and players sing an official ‘anthem’ before the match starts.

While the origins of Ashbourne’s game are obscure, Shrovetide football matches have taken place in the United Kingdom since the 12th century. Historians have suggested that hugball matches developed during the 100 Years War with France and were intended as a display of contempt for the enemy; another, more gruesome theory says that the Ashbourne match was initially played with a severed head after public executions in the town. 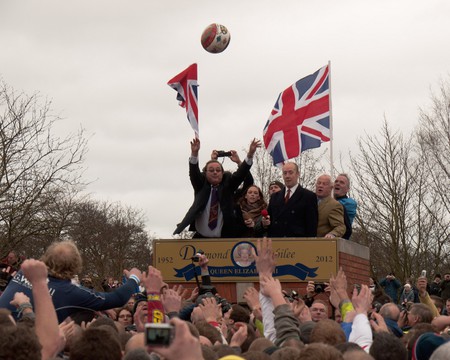 The Royal Shrovetide Football at Ashbourne | © Will De Freitas / Flickr

TIchborne Dole dates back to the 12th century and the reign of King Henry II. The dole, which involves the charitable giving out of bread (the name comes from a Middle English word meaning to share or hand out), is said to have started in an almost impossibly bizarre way. As a local landowner’s wife, Lady Mabella Tichborne, lay on her deathbed, she charged her husband with the donation of farm produce to the poor every year. But Lord Tichborne was more miserly than his spouse and although he agreed, he did it on one condition: he would only give away produce from land that his dying wife was able to crawl around with a lit torch. Despite her moribundity and the oddness of her husband’s demand, Lady Mabella succeeded in crawling around 23 acres, an area which is still known as The Crawls.

Today, the Tichborne Dole is held on Lady’s Day (25 March) every year, when Tichborne locals line up grasping anything from plastic bags to pillowcases to receive their allotted dole – a gallon of flour per grown adult. Before the flour is given out it is sprinkled with incense and holy water, and blessed in the name of Lady Mabella.

The Tichborne Dole takes place every year on 25 March.

On Easter Sunday every year, the Lancastrian town of Bacup plays host to eight men with blackened faces, wooden bobbins tied to their knees and clogs on their feet, dancing non-stop through the streets for seven miles. The original Nutters, or Britannia Coco-nut Dancers, were a troupe of clog-dancers employed in the nearby coal mines and cotton mills; their blacked up faces are said to represent these coal-mining roots. The eight dancers are led by a Whipper-in, who directs them on their 12-hour jig through the town. The wooden bobbins, taped to various parts of their bodies, function as percussion as the Nutters smack them together while waving flowered garlands in the air.

Nutters’ Dance is held every year on Easter Sunday. 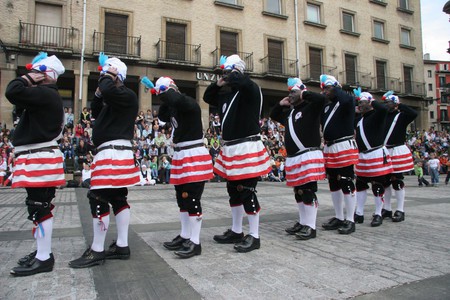 Thought to be the oldest dance festival in Britain, the Padstow ‘Obby ‘Oss, or Hobby Horse, sees tens of thousands of people converge upon the small Cornish town every May Day holiday. A dialect variant of hobby horse, the ‘Obby ‘Oss is thought to be either a derivation of pagan fertility festivals, a relic of ancient Celtic horse-worship or perhaps a warning to would-be invaders of the seaside town.

Early in the morning of the ‘Oss, Padstonians decorate the town in greenery and erect a Maypole, a traditional element of Spring festivities in England. Two dance troupes take to the streets, each led by an ‘Oss, a dancer in equine costume. The Old ‘Oss captures young women as it cavorts through town and conceals them in a black cape as a fertility rite; the Blue Ribbon ‘Oss, on the other hand, symbolises peace. Both ‘Osses dance and sing around the town with their costumed troupes before retiring to their ‘stables’, one of two local pubs.

The Padstow ‘Obby ‘Oss takes place every year on May Day. 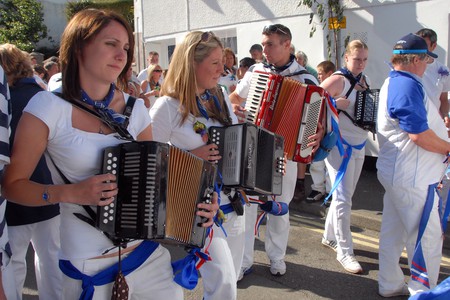 The extreme sport of UK’s festivals, the Coopers Hill May Bank holiday cheese-rolling is so risky that campaigners have suggested a ban on the 15th century event. That’s perhaps not surprising: the rolling takes place on a grassy hill with a gradient of 1:3, down which dozens of contestants chase a 9lb Double Gloucester cheese. The cheese, which is given a one second head start on the runners, can reach speeds of over 70 miles an hour and poses a serious threat to onlookers if it bounces off course; however, the most at risk are the cheese-chasers, who can suffer sprains and fractures as they hurtle downwards in pursuit. Everyone is aiming to catch the cheese, but few do so the winner is simply the first person to the foot of the hill.

Thanks to increased publicity in recent years – not least after the 1993 cheese-rolling, during which 15 people were injured – the event has become popular with adrenalin hunters from across the world. 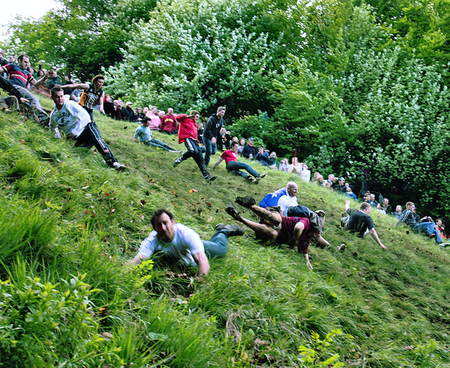 The quintessential hippie festival, the Winter solstice at Stonehenge is not everyone’s ideal way to spend the shortest day of the year. The crowds can be daunting, composed of a muddle of tourists, history buffs, bleary-eyed new agers and bearded neo-Druids. The standing circle itself is now fenced off thanks to vandals, and backed by one of Britain’s busiest roads, none of which makes for the most spiritual way of celebrating the solstice.

That said, watching the sun rise over one of the world’s oldest monuments, dated from between 3000 to 2000 BC, can be a life-changing experience for even the most cynical individual. As day dawns at around 8am, the sun casts a beam of light, which connects the three main stones of the henge: the altar stone, the slaughter stone and the ‘heel’ stone. This is thought to be the moment that Neolithic peoples considered sacred, although historians still contest the exact significance of Stonehenge. 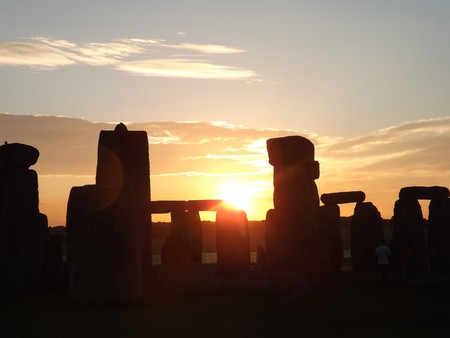 Hunting of the Earl of Rone, Combe Martin, Devon

In the Devon village of Combe Martin, the residents re-enact a 400-year old manhunt. A man, dressed in sackcloth and disguised by a mask, is pursued through the town by beribboned Grenadiers. Now and then, the Grenadiers will catch and shoot the fugitive, but a Hobby Horse appears from the crowds, miraculously revives him, and the hunt goes on. The end finally comes when the hunt reaches the sea and the man is thrown into the sea until next year.

Unusual as it sounds, the Hunting of the Earl of Rone may have historical roots. The Earl of Tyrone, fleeing from Ireland in 1607, is said to have been shipwrecked on the Combe Martin coast and hunted down by a regiment of Grenadiers. Why this might have been adopted as an annual ritual by the villagers is unknown, but after being banned during the Victorian era for licentiousness, the hunt has now regained its popularity, with many locals dressing up and taking part.

Scots are renowned for their gusty celebrations over New Year, or Hogmanay as it’s known in Scotland. Few celebrate more enthusiastically than the inhabitants of Stonehaven, a small fishing town in the North East of the country. Braving the bitter cold just before midnight on the last day of the year, more than 30 Stonehaven residents parade through the streets twirling enormous balls of fire about their heads, accompanied by a local band of bagpipers. At the end of the parade the fireballs are hurled into the North Sea and the people begin to ‘first foot’ their neighbours, rushing from house to house for a dram of whisky.

The fireballs, made from combustibles such as coal, wood and fir cones, are big enough to mean that years ago bystanders had to dodge the flying flames, although now crowds are kept well back. Organisers are proud of the fact that the event has only been cancelled twice – during the First World War – and has never been defeated by the notorious Scottish weather. 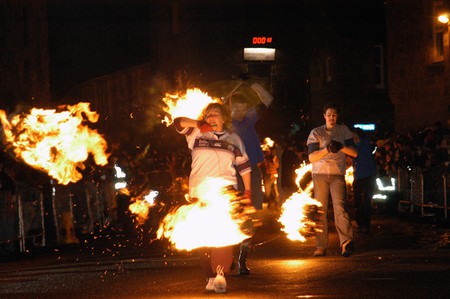