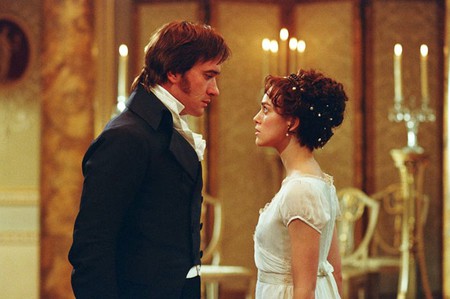 Jane Austen’s novels have stood the test of time and are perhaps even more celebrated today than ever. Especially in the ‘90s, it became very popular to adapt these novels into films for the big screen and for television, which left the public with a plethora of skilled, big-budget films depicting some of their favorite Victorian novels. Here are the best films of the best novels ever.

Of course, this is Austen’s most popular novel of all time; it has been loved by readers through the ages and is constantly being reinterpreted and reinvented. This 2005 adaptation, starring Keira Knightley as beloved Elizabeth Bennet, was very divisive among fans in terms of an accurate rendition, however it is remarkable for its beautiful cinematography and an ethereal score composed by Dario Marianelli that truly bring the story to life.

This version is considered to be more accurate, especially because it is actually not a movie but rather a miniseries. Therefore, instead of condensing the entire novel into a feature film, it is produced in five one-hour episodes. BBC is historically meticulous with production and with the script, and it pays off in this true homage to the book.

Gwyneth Paltrow could not play a more perfect Emma Woodhouse, who reigns like a queen over her little kingdom as the doted-on daughter of a widowed gentleman. This movie is visually rich and correctly communicates all the trials and education of its protagonist while still being hugely enjoyable. Emma’s attempts at matchmaking backfire, and she learns her lessons while falling in love herself—coming into her womanhood a little wiser.

Again, casting in this film could not have been more perfect with the juxtaposition of a young, beautiful, and emotional Kate Winslet as a vivid Marianne versus her quiet, pragmatic, and wise sister played by Emma Thompson, who also wrote the screenplay for this lush film. Add in the male opposites as love interests — Alan Rickman as the old and steady Colonel Brandon, and Hugh Grant as the fumbling, sincere Edward Ferrars — and this time-tested story, directed by Ang Lee, becomes an unforgettable film.

While this movie veers away from the plot of the novel a bit, it takes its adaptations with purpose in order to communicate the ideals and inspirations of the characters and the author in greater detail. The film follows poor Fanny Price as she is raised in the home of her rich uncle among her cousins, only one of whom sees her as an equal.

Who doesn’t love Felicity Jones, especially in a period piece where she seems to fit so naturally; she stars as Catherine, who yearns for the soul-striking romance that she reads about in Gothic novels. When she visits the haunted Northanger Abbey, she finds just what she has been searching for, but realises it may have been more than she ever wanted in reality.

This was a distinctly British production that filmed on location and was very realistic in its depiction of 19th-century life. This mature novel depicts a pair of lovers who find each other again, as Anne Elliot, who once rejected Captain Frederick Wentworth, learns humility and forgiveness in order to come together eventually in happiness.

Based on Austen’s novice epistolary novel written in juvenilia, originally called ‘Lady Susan’, this film stars Kate Beckinsale as a conniving and witty widow determined to make a suitable match for both her daughter and herself. Although it hasn’t actually come out yet, it has received stellar reviews from critics so far and the trailer looks deliciously entertaining and funny. Finally, a film that manages to communicate Austen’s truly egregious sense of irony and humour. We can’t wait to see this one on May 13, 2016.