The scale is hard to imagine if you’ve not seen it, but while this French theatre company loves to dream big, its focus on detail is just as impressive. 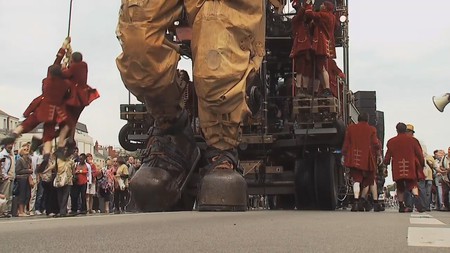 These street theatre shows – which have taken place in cities across the world – are carefully put together and very human events. The giants are skillfully controlled by cranes, and their smooth movements feel eerily natural – you can be gripped just by the way they beckon with their hands, or by the tender glances they exchange with each other.

The events spread over several days and tell stories, typically focusing on travel and friendship.

The story of Royal de Luxe

Royal de Luxe was founded in Aix-en-Provence, in the south of France, in 1979 by Jean-Luc Courcoult. The aim, instead of trying to bring people into theatres, was to bring spectacles to the streets. Rather than being a director, Courcoult has described himself as a “worker of the theatre” who aims to “lift people’s hearts”.

Shows mixed everyday objects like bidets and elevators with increasingly ambitious creations such as huge elephants and rhinos. In 1989 Royal de Luxe moved to Nantes, and since the 1990s, its focus has been on giants. The long-running ‘Saga of the Giants’ has seen shows performed in France, Germany, Chile, Mexico, Australia, Belgium, Portugal, Iceland, Spain, Switzerland and Canada.

The shows have often been chosen to commemorate specific events, including the opening of the Channel Tunnel, the anniversary of World War I and the centenary of the death of the pioneering French writer Jules Verne.

Royal de Luxe’s ‘Saga of the Giants’ has seen a little girl and her grandmother dance through the streets of Geneva, a deep-sea diver wade the Spree River in Berlin, a dog lope along Liverpool’s docks and a girl bathed in a shower of spray in Guadalajara. All the while, performers adjust pulleys and swing on ropes around these giant figures, while the cranes move the show onward, almost forgotten in the excitement.

What’s next for Royal de Luxe?

At the end of 2018 and after nearly 20 years of events, these great puppets were retired, leaving Royal de Luxe to plan its next move.

In November 2019, something magical happened: the sight of a tree that appeared to grow overnight through a car became a social media sensation. Royal de Luxe were found to be the culprits, explaining that the tree hadn’t grown overnight, but was in fact an art installation.

The company has bigger things brewing, though, and its next major project will feature a giant silverback gorilla. Future tours are still wrapped in mystery, but given Royal de Luxe’s track record, when the great ape hits the streets you’ll want to be there, marvelling with the crowds.