The Mysterious Shell Grotto in England’s Coastal Town of Margate

Margate is a cheerfully mixed up place. It’s home to tacky seaside attractions, hip boutiques, windswept whelk stalls and a world-class art gallery. Away from the shore, flats and houses stretch uphill, past an underground attraction that’s adorned with shells and cloaked in mystery.

This attraction is the Shell Grotto, a cavern whose every inch is covered in seashells – some 4.6 million of them. From the entrance and gift shop, you descend a chalk staircase to an arch. From here, the dimly lit passage coils onwards, its walls decorated with strange markings, eventually opening out into an eerie chamber. 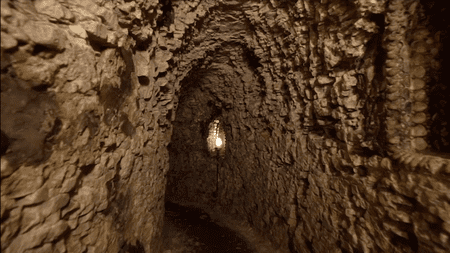 With its vaults, mosaics and a central shaft that opens up to the sky, the Shell Grotto is an otherworldly place, with a strange new dimension feeling heightened by the mystery that surrounds its creation. Nothing was known about it until 1835 when the owner of the cottage above uncovered an opening while undertaking some home improvements, and its origins still aren’t known.

Some theories suggest it could date as far back as the Romans or even the Phoenicians – the Mediterranean trading power that gave Britain its name (they called it ‘Baratanac’, or ‘Land of Tin’). Elizabethan mystics, Freemasons, the Knights Templar and eccentric 18th-century aristocrats (the most likely story) have also been named as possible constructors.

The shells – mussels, cockles, whelks, limpets, scallops and oysters – mostly come from the surrounding area, and the most common symbols represent the sun, the stars and the moon, which has led some to pin the grotto on a local pagan cult. It has fascinated numerous people over the centuries, including David Bowie, a Margate fan whose last album – Blackstar – featured a star design that’s eerily reminiscent of the cavern’s symbols. Bowie never mentioned a connection, leaving another mystery buried in this unique subterranean site.