The Most Unusual Cotswolds Traditions

Cheese Rolling at Cooper's Hill | © Michael Warren/Flickr
No one does weird and wonderful traditions quite like the people of The Cotswolds. From hurtling down one of the steepest hills in Gloucestershire in pursuit of a cheese, to playing a football match in a river, here are seven of the strangest annual events that you need to see with your own eyes.

WHEN: Usually held on the second Bank Holiday Monday in May

WHAT: Famous or should that be infamous around the world, Cheese Rolling at Cooper’s Hill is as much as part of The Cotswolds as sheep! Each year plucky competitors try and stay upright as they chase a 7-8lb Double Gloucester cheese down the near-vertical slope. The first person who makes it to the bottom of the hill is the winner and is awarded the cheese. 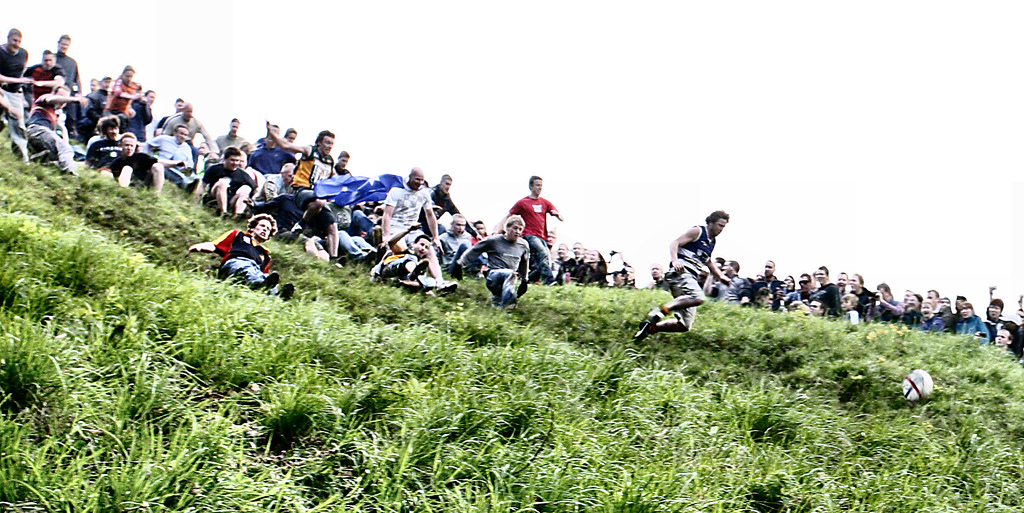 Football in The River

WHAT: The picturesque village of Bourton-on-the-Water comes to life every August bank holiday, as it plays host to this unusual football match. Following a tradition dating back over 100 years, two teams of players from the local Bourton Rovers FC battle it out for victory in a game of football played in (yes, in!) the River Windrush. Crowds of spectators come to watch this quirky game of football each year, which coincides with the Bourton Rovers fete, a traditional family-friendly fayre held on the village green next to the river. 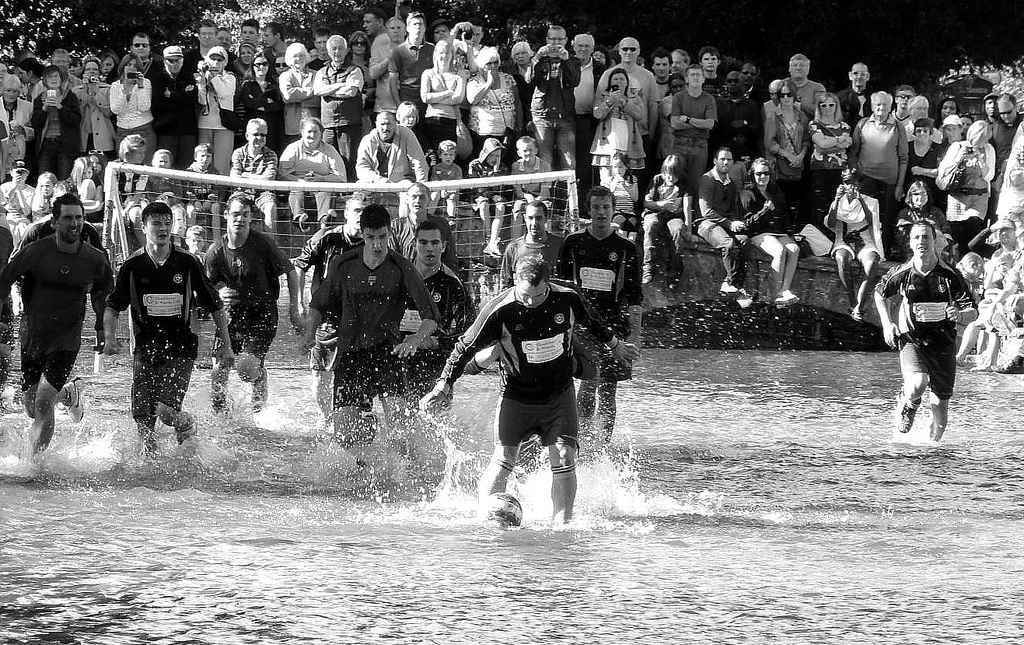 Football in the River | © Martyn Wright/Flickr

WHAT: Every year, on Boxing Day, thousands of spectators line the banks of the River Coln to watch the iconic Bibury Duck Race. Organised by the local cricket club, the event sees thousands of plastic ducks released into the river over two different races. The first race features 150 realistic ‘decoy’ ducks float down the river – sponsor a duck for £10 and if it wins you get to nominate what charity all the day’s proceeds go to. The second race features more than 2,000 yellow rubber ducks, which can be sponsored for just £1 each, with prizes for the first 20 ducks (and the very last) to cross the finish line. Mince pies and mulled wine are on offer to help you stay in the festive spirit, even if your duck loses!

WHEN: Usually held on the second Bank Holiday Monday in May

WHAT: Dating back to the 17th century, this ancient race celebrates Tetbury’s history as an important wool and yarn market town. The story goes, that young drovers (who used to walk sheep from one market town to another) would run up the steep Tetbury Hill carrying a woolsack on their backs, to try and impress the local young women. Today, teams of four run in a relay up and down Gumstool Hill with a woolsack on their back (60lb for the men and 35lb for the women) for the glory of winning, plus the chance to raise money for local charities. 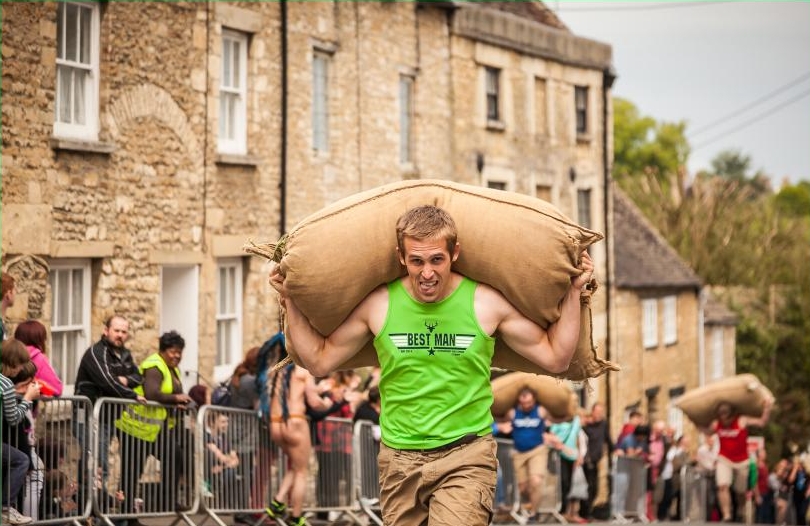 WHAT: The Cotswold Olimpick Games first began in 1612 and were organised by local lawyer Robert Dover. His idea was to hold an annual modern Olympics-style competition for the local people to get involved with. Don’t expect your typical 500m sprint or javelin throwing events here: the Olimpicks features unique competitions including the static jump (jumping as high as you can in the air from a standstill), tug o’war and shin kicking!

WHERE: Randwick, near Stroud, Gloucestershire

WHAT: With its origins dating back to the Middle Ages, the Randwick Wap is a fun, colourful costumed procession that gets all the village involved. The Wap Mayor and Queen are carried through the village, led by the Mop Man – who uses his wet mop to clear the crowds – before the Mayor is dunked in the pond. Cheeses are rolled down the bank at Well Leaze (not to be confused with the much more high-octane cheese rolling at Cooper’s Hill) before everyone enjoys a traditional village fayre, including attractions like a coconut shy and welly wanging. You couldn’t make it up. 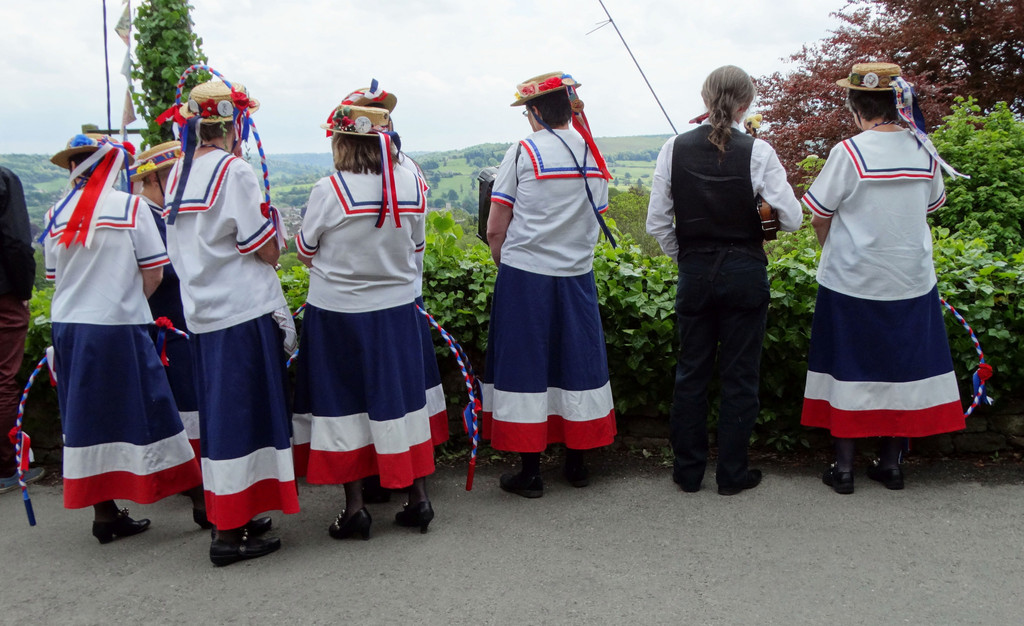 WHAT: At 11am every Boxing Day, the town crier leads a procession of the Marshfield Mummers (all dressed in bizarre costumes made up of strips of paper), through the streets of this South Gloucestershire village. Here, the characters perform the Ancient Marshfield Mumming Play. Featuring all sorts of colourful characters including Father Christmas, Little Man John, Saucy Jack and Tenpenny Nit, the play ends with a unique three verse song and accompanying dance. What makes this play extra special is that no part is ever written down, it’s just passed from generation to generation by word.