The Best Pubs in Cambridge: An Insider’s Guide 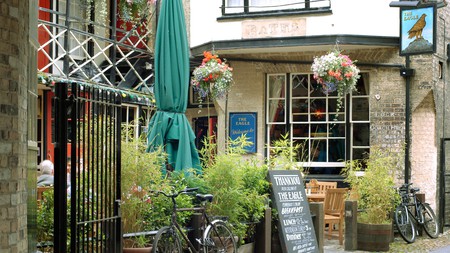 For a relatively small city, Cambridge, England, is home to an impressive array of British pubs. From centuries-old free houses to trendy craft beer venues, there’s a perfect pint for everybody waiting in this historic university town. Jethro Scotcher-Littlechild, co-owner of The Cambridge Blue, and Julia Kimbell, who manages The Eagle, take us through the best of the bunch.

Every student city worth its salt is home to a good boozer or two. Unlike many university towns, nightlife in Cambridge doesn’t revolve around thumping clubs so much as an eclectic collection of wonderfully charming pubs.

“The pub scene in Cambridge is very vibrant. Thanks to a large student population and lots of tourism, pubs in Cambridge are thriving,” explains Jethro Scotcher-Littlechild, co-owner of popular establishment The Cambridge Blue.

“There’s always something to do [and] somewhere to go around Cambridge,” agrees Julia Kimbell, who has managed the legendary Eagle pub for the past three years. Here are the best places in the city to sink a pint or two. 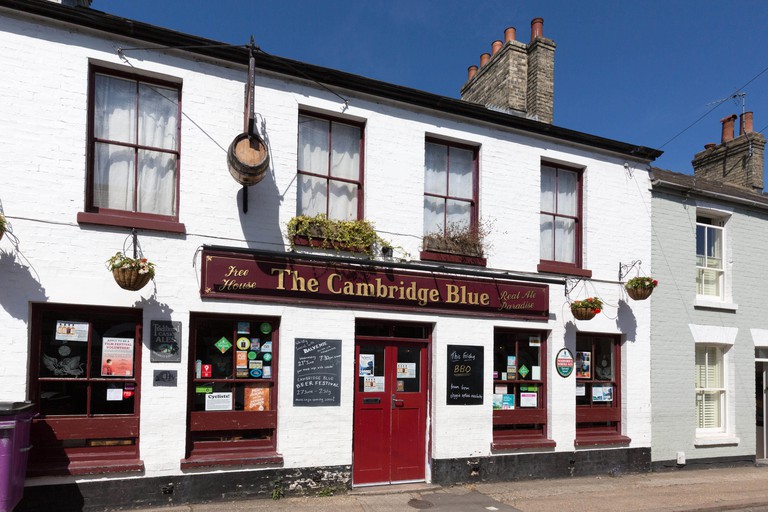 © Kumar Sriskandan / Alamy Stock Photo
Scotcher-Littlechild has co-owned The Cambridge Blue for over 12 years. He describes the pub as “fairly traditional” and names “students, locals, families and older people” among its varied clientele. Originally known as The Dewdrop, pub changed its name in the 1980s, when a former university rower took over as landlord and rechristened it in honour of the squad. “We’re well known for our massive range of real ale and Belgian beers,” Scotcher-Littlechild says. “We do food, too, mainly Pieminister pies and standard pub fare like sausage and mash or fish and chips.”
Open In Google Maps
85-87 Gwydir Street, Cambridge, England, CB1 2LG, United Kingdom
+441223471680
Visit Website
Visit Facebook page
Give us feedback 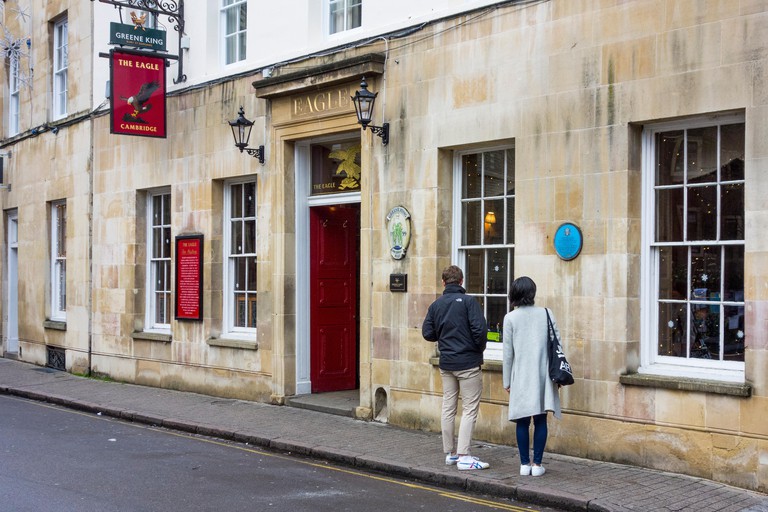 The Eagle has been serving pints since 1667 and there’s plenty of history surrounding this excellent pub. The ceiling is famously graffitied with the names of hundreds of RAF and American pilots who wished to immortalise themselves at their favourite watering hole during World War II. In 1953, Watson and Crick, who were regulars at the pub, walked in and gleefully announced that they had discovered the DNA structure. The pub’s known for its signature offerings. Julia says, “I would recommend our Eagle’s DNA beer and the Eagle burger.” 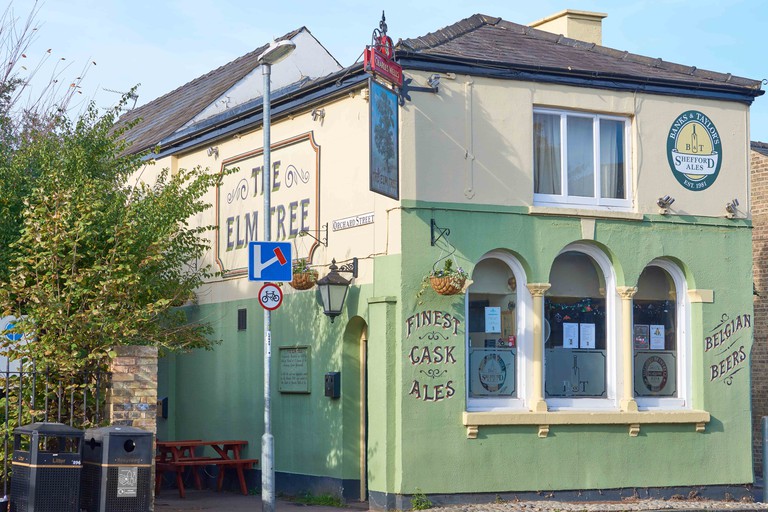 “The Elm Tree is very quirky,” says Scotcher-Littlechild. “It’s a small pub, it’s off the beaten track but they do a good range of Belgian beers and real ages. It’s a friendly little boozer.” This proudly old-fashioned establishment is lit by candlelight in the evenings and allows customers to bring their own food. It’s charmingly decorated with an assortment of bric-a brac, much of which is memorabilia from breweries that are no longer. There’s a variety of board games on offer by way of entertainment, as well as occasional live music performances.

Dating back to the 1740s, The Castle Inn has well and truly withstood the test of time. It’s a friendly watering hole at the foot of Castle Mound and is decorated with old photographs of Cambridge in days gone by. Acquired by Adnams brewery in 1994, it serves a range of sustainably produced beers and spirits. “They keep a good pint and it’s a nice big pub for a big group,” says Scotcher-Littlechild. The Castle Inn is also known for its cheap and delicious burgers. 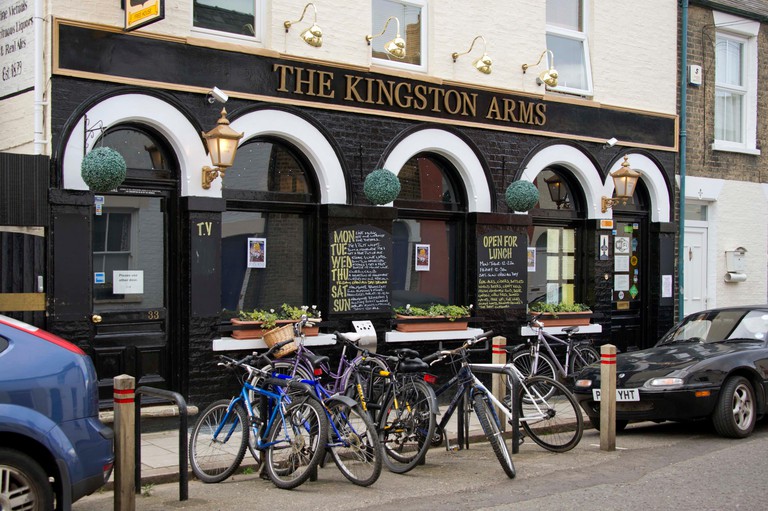 “It’s a fairly small pub, just down the road from us, and it serves a good pint of beer,” Scotcher-Littlechild says of The Kingston Arms. It’s noted for its charming blue facade and its 12 pumps, which serve six regular cask ales, four changing beers and two rotating ciders and perries. The atmosphere here is laid-back, unpretentious and decidedly cosy; it feels more like a living room than a free house. The food at this family-friendly establishment is all made from locally sourced ingredients and there are always some delicious daily specials on offer. 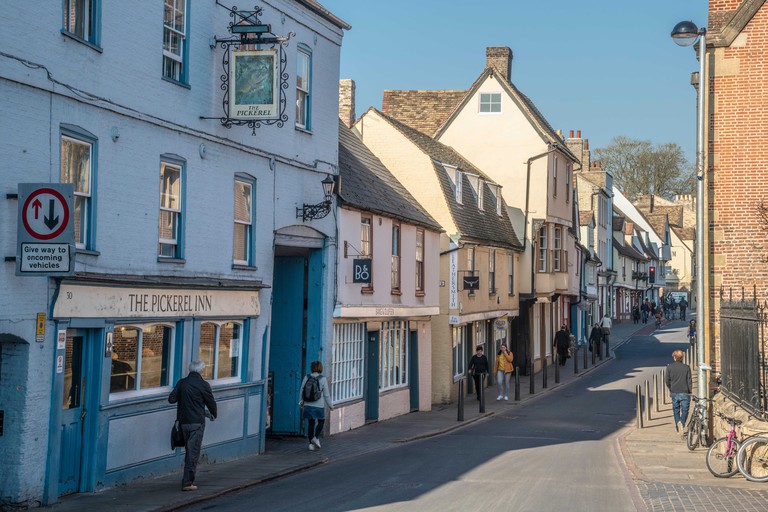 “I would recommend The Pickerel,” says Kimbell. “It’s the oldest pub in Cambridge, right on the River Cam. It’s a very warm and cosy place with lots of nooks and crannies.” The Pickerel certainly has a colourful history – previous incarnations include a gin palace, an undertaker’s and even a brothel. Owned by neighbouring Magdalene College, it was a favourite with author CS Lewis during his time at Cambridge and it even has a resident ghost: the spirit of a former landlady who drowned in the River Cam during the 1950s. Either of The Pickerel’s exclusive signature ales – The Aesop’s Luceus and The Biting Bitter – is the clear choice of beverage when visiting this historic Cambridge pub.

The Maypole is a lively free house with a large beer garden that’s perfect for big groups, particularly in the summertime. It’s been run by an Anglo-Italian family since the 1980s and serves delicious Italian food made with fresh, local ingredients. Patrons are spoiled for choice with 16 real ales on offer, and they’re all of such quality that the Campaign for Real Ale (CAMRA) named The Maypole its 2018 Pub of the Year. For those more partial to spirits, there’s a choice of over 50 gins and plenty of wines and whiskies, too.

The Baron of Beef 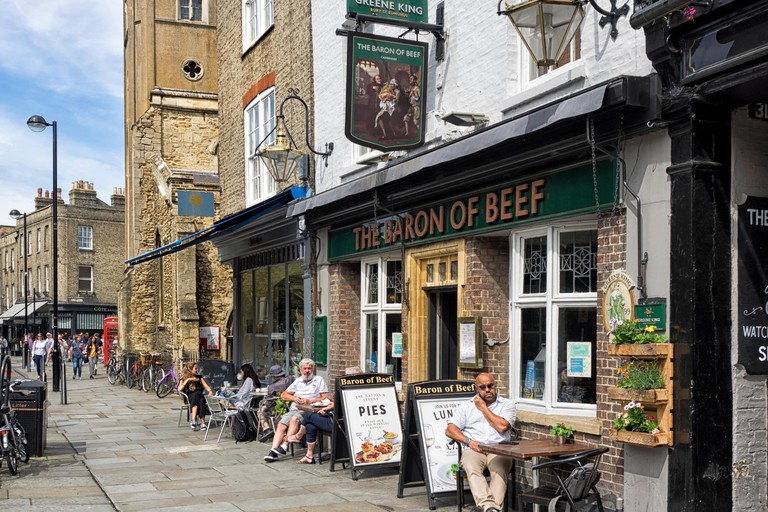 “There’s something for everyone in Cambridge,” says Scotcher-Littlechild of the city’s pub scene. While the city is full of traditional pubs, The Baron of Beef appeals to Cambridge’s younger population as a modern boozer with ample seating and reasonable prices. There are plenty of gluten-free, vegetarian and vegan options on the food menu, which mainly consists of standard pub fare. Douglas Adams, creator of The Hitchhiker’s Guide to the Galaxy, reportedly favoured The Baron of Beef, so sci-fi fans should definitely check this pub out.

The Prince Regent is another pub that’s especially popular with Cambridge’s students and younger locals, perhaps thanks to the free Wi-Fi. Ideally situated right next to Parker’s Piece, it boasts a huge beer garden and a friendly, buzzing atmosphere that makes it the perfect summer drinking spot. It’s a popular choice for a slap-up pub lunch – its fish and chips are especially popular. The Prince Regent has got everything from real ales and bottled beers to classic cocktails, all of which are on offer after 5pm.