The Best Hotels With a View in Devon, England 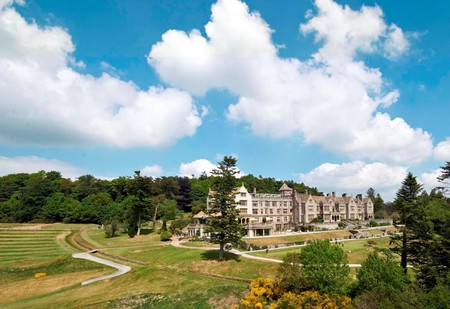 Despite being a popular holiday destination since the Victorian era, the English Riviera (and the rest of Devon, for that matter) will never have the climate to compete with its Gallic counterpart. This means even high-summer bookings aren’t exempt from the occasional shower. Checkmate the weather and opt for a hotel with a view so you can soak in the surroundings from the comfort – and, crucially, the shelter – of your hotel. 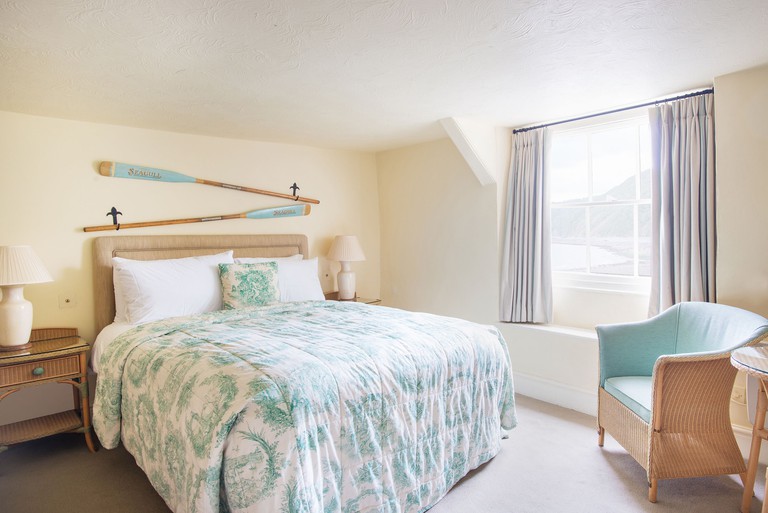 Step back into a time of delightful cobbled paths and unusual traffic at Clovelly; a historic harbour village where you won’t see a single car but might bump into a donkey or two. Clinging to a 122-m (400-ft) cliff, Clovelly is steeped in quaintness and history. Discover why artists and writers have been entranced by this higgledy-piggledy fishing village at the 18th-century Red Lion hotel, where the maritime theme continues with porthole doors, oars as ornaments and windows that reach right out to the bay below. 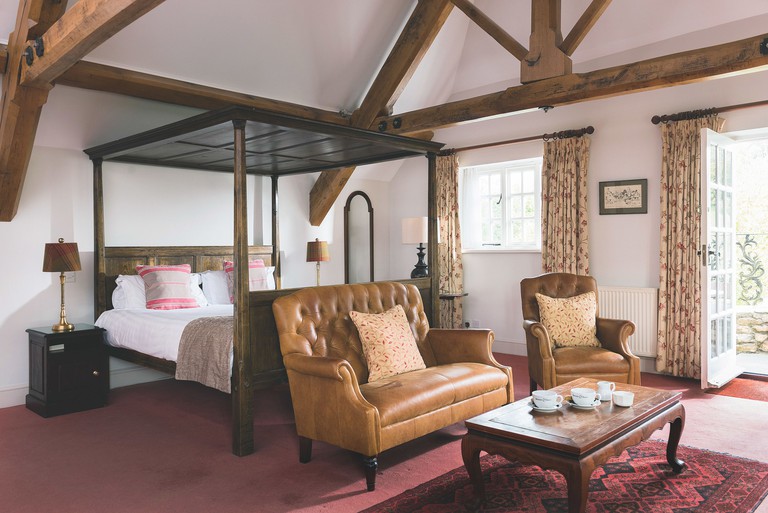 Crackling fires and thatched roofs make for a fairytale setting – though hopefully not in a Three Little Pigs sense – at this St Austell-owned guesthouse. Branscombe countryside stretches out in every direction so you’ll start your day looking out to rolling, green land. Prising yourself from the jumbo bed, follow the route walked by dinosaurs along the Jurassic Coast.

Savvy time-tight guests can make the most of South Sands’ live webcam prior to booking, though with views in most rooms, you’ll be hard-pressed to pick the best. For a stop-you-in-your-tracks panorama of the bay, head straight to the restaurant where the sea almost meets the glassy screen, and specials depend on the catch of the day. 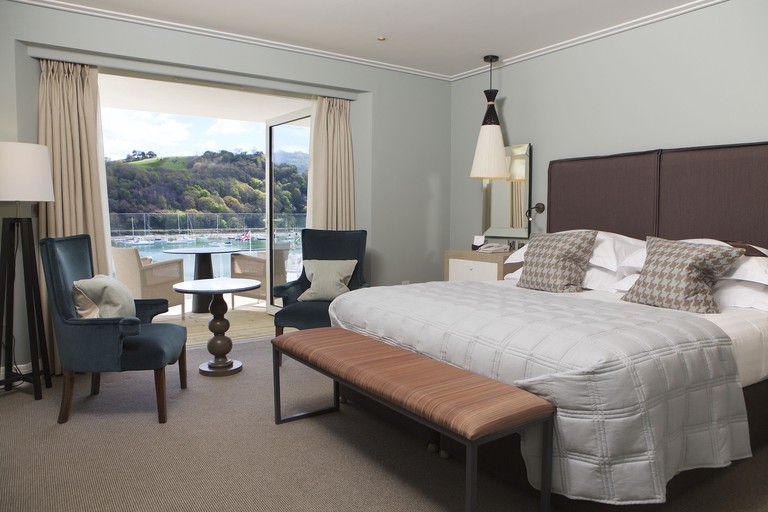 “Cool, calm, classic” is the motto at Dart Marina – a water’s-edge residence specialising in understated elegance and chill yachting vibes. A soothing palette of slate, feather-grey and oatmeal is everywhere from the waterfront rooms to the vintage Cloud Nine bus, which pitches up every summer to serve coffee and classic drinks by the river. Wall-to-floor balconies flood rooms with light and the occasional rainbow spectrum when the sun hits the sailing-boat scattered River Dart. 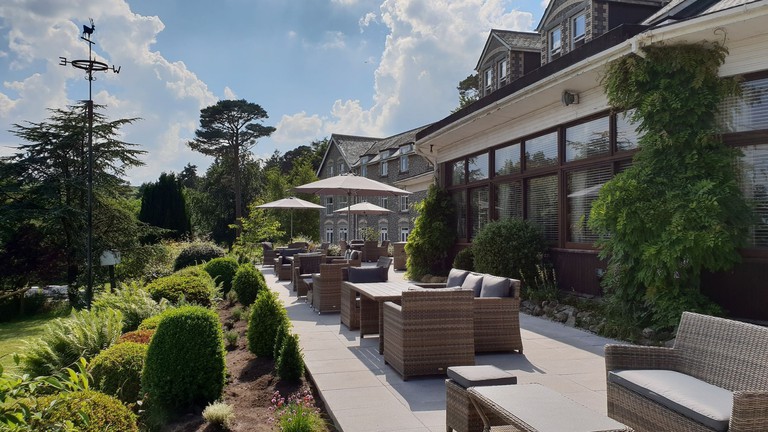 There are no prizes for guessing the landscape The Moorland Hotel looks out to – but you will be rewarded with a rolling (you guessed it) moorland vista. Plonked on the sleepy Southern Dartmoor hills, views stretch from South Hams to the sea. Fuel up on a continental or full English breakfast and head out to make the most of your stay, exploring the rippling countryside up close. 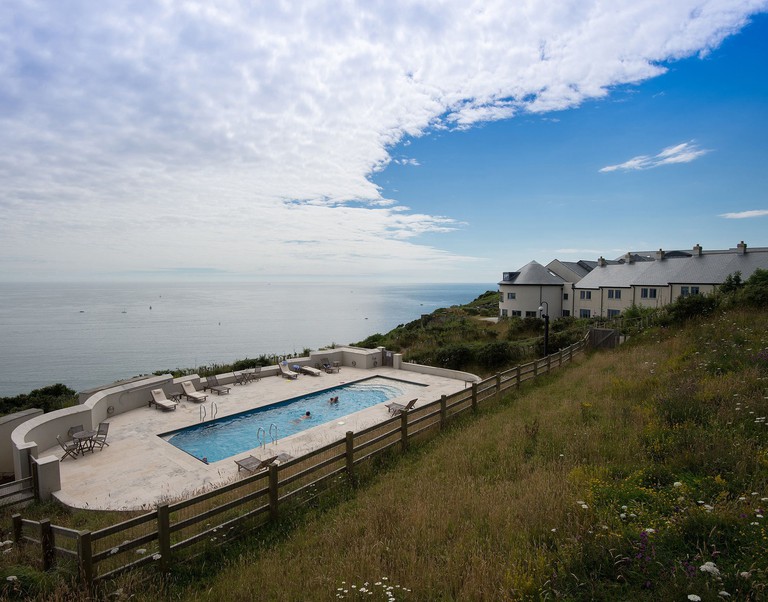 What better way to temper the jagged cliffs, coiling coastal paths and unforgiving ocean than to enjoy it all from the sanctuary of a sleek, sheepskin shag-strewn bedroom? There’s a mischievous pleasure to be had in watching hikers battle the conditions while enveloped in a plush, pillowy duvet. Of course, there’s always the option to be on the other side – especially from the Secret Suite where there’s a free-standing tub to submerge in after. 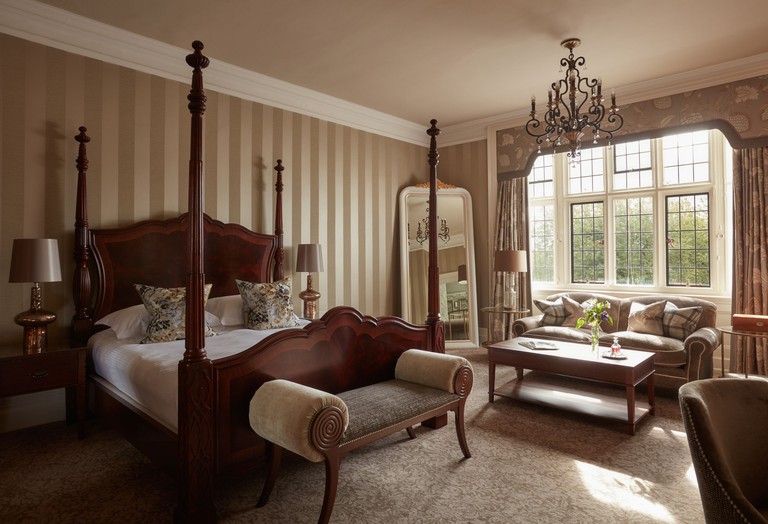 Courtesy of Bovey Castle / Expedia
View Rooms
Clusters of trees, ponds and pastures unfurl further than the eye can see at Bovey Castle, a place that could double as a filming location for The Crown. Adopt a little Balmoral chic and don your galoshes for a stomp around this plush country pile. Everything from off-road driving to gin tasting in the on-site distillery is at your disposal along with a sleekly designed spa and golf range – no castle would be complete without them.
More info 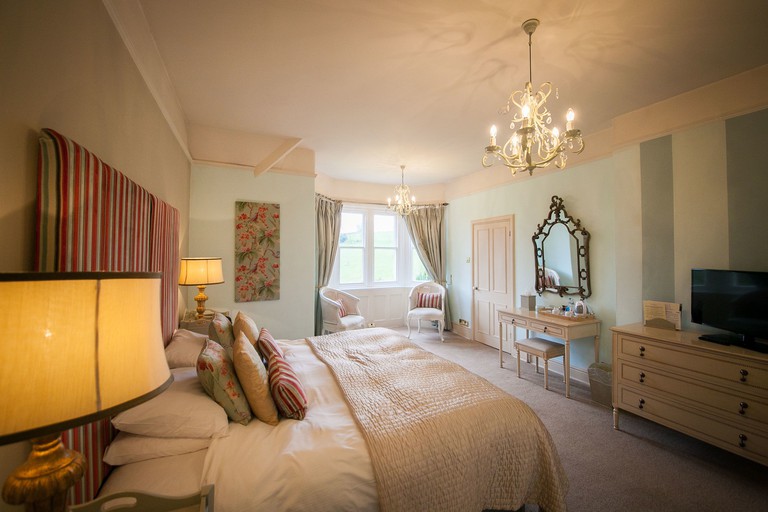 It’s hard to tell if it’s the brightly painted mural of Tudor life – replete with lutes and Henry VIII playing croquet, naturally – or the snow that dusts the rambling stone estate in winter that lends Northcote Manor a magical quality from a bygone era. Fortunately, you’ll find all the modern creature comforts alongside Rococo furniture and ornate chandeliers in rooms which overlook tumbling hills and a walled garden – a lot like those in the mural.