The Best Hotels to Book Near the University of Exeter, England 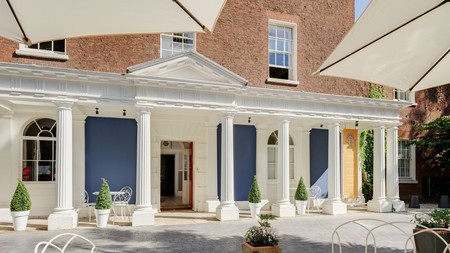 Once home to J.K. Rowling, this vibrant university city in England is awash with cobblestone alleyways, revelling students and cosy pubs. Book a stay at one of these top hotels in South Devon with Culture Trip – from boutique boltholes to Victorian B&Bs.

The University of Exeter is one of the most highly regarded in the country. Two of its four campuses are located in the city – the other two are in Cornwall. Exeter itself is a charmer, boasting a Roman city wall, Norman castle and gothic cathedral. Beyond historical sights, you’ll find quirky boutique shops and buzzing bars here, around Gandy Street, plus the city boasts a lively quayside with quaint pubs and an indoor climbing wall. Stay in the city, and explore not only Exeter but also the glorious Devon hinterland. 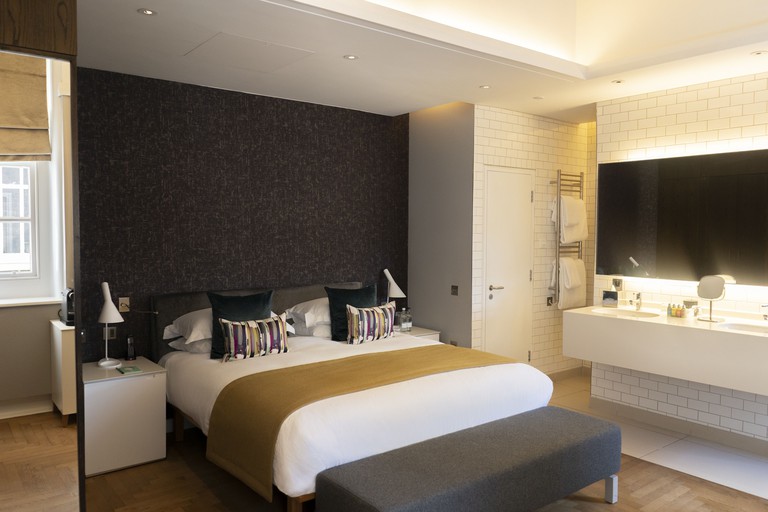 Courtesy of Hotel du Vin / Expedia
Once the eye hospital in the city, this delightful place is now a contemporary hotel run by the boutique chain Hotel du Vin. Enjoy life’s little luxuries, like egyptian-cotton sheets, a Nespresso machine and smart technology. Emerge from this sanctuary to eat at the brasserie, or enjoy a glass of red at the library, bar or snug. Don’t miss the botanical mural painted by Hugo Dalton that adorns the lounge wall. Exeter Cathedral and the main shopping street are an eight-minute walk away. 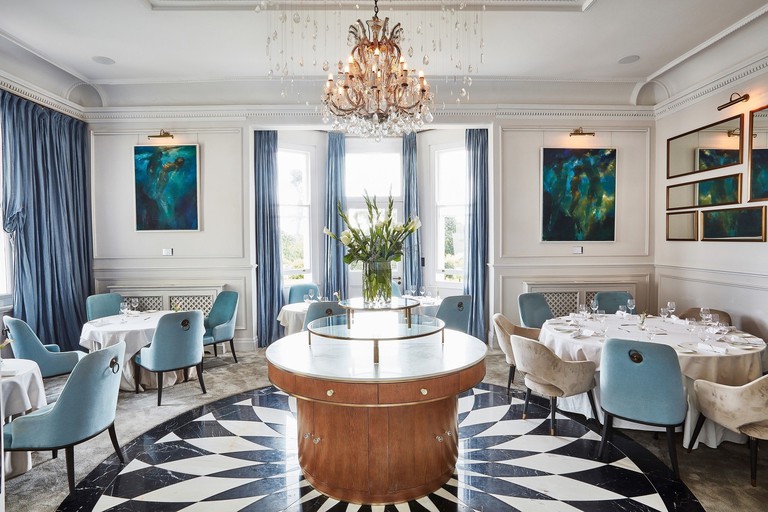 Courtesy of Lympstone Manor / Expedia
Lympstone Manor is located on the edge of Exmouth, about a 30-minute drive from the university. Originally a farmhouse, the property was owned and extended in the 18th century by the Barings family of bankers. In recent years, it has been carefully restored by chef Michael Caines and is now a successful country house hotel with the unusual addition of shepherd’s huts on the grounds. Food is a highlight; regional dishes dominate a menu that changes with the seasons. 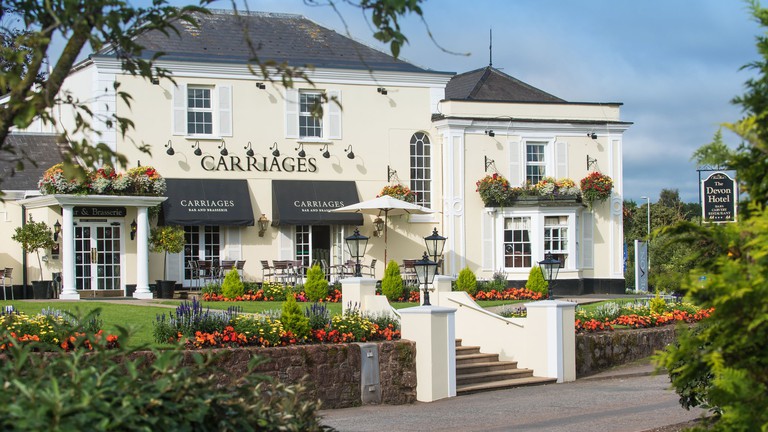 Courtesy of The Devon Hotel / Expedia
The Devon Hotel, 4mi (6.4km) south of the university, is part of the Brend Group. Once a standard 1970s motel beside a Georgian manor house, it has been transformed into the luxury property you see today. Work up a sweat in the impressive fitness suite before breakfast. Dining at Carriages Brasserie is a treat, but, on a sunny day, it’s hard to beat an al fresco meal on the terrace. Note: electric car and Tesla charging points are available on site. 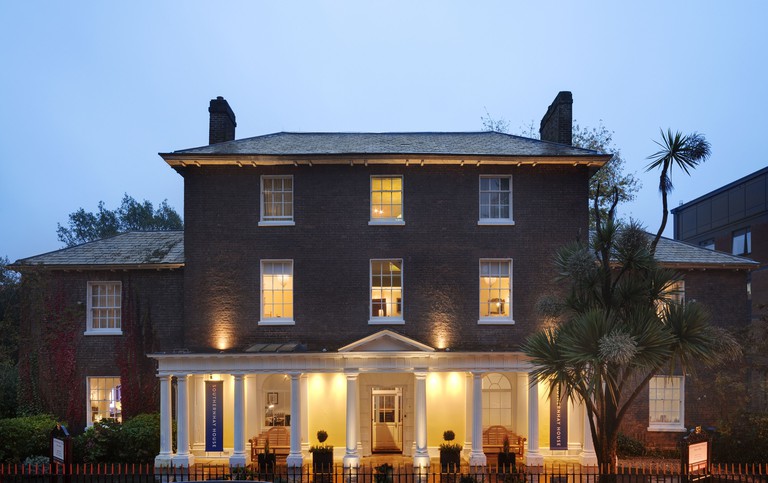 Courtesy of Southernhay House Hotel / Expedia
Major General William Kirkpatrick was the first owner of the grand mansion that became the Southernhay House Hotel. In the early 19th century, he worked for the East India Company. As a result, rooms are named after goods traded: Silk, Cotton, Ivory and Spice. The interior design reflects that early opulence, with injections of glamour from luxurious soft furnishings, carefully curated antiques and features like freestanding baths. Unwind in the casual club room or at the cocktail bar. 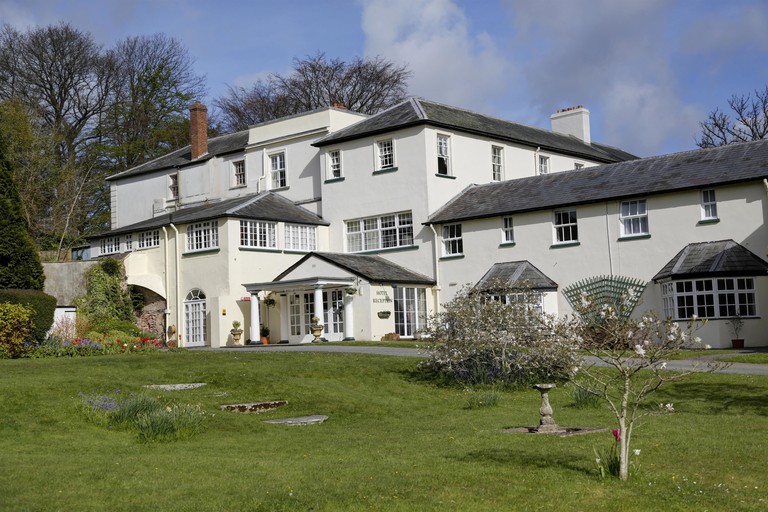 Courtesy of Best Western Exeter Lord Haldon Country Hotel / Expedia
Lord Haldon Country Hotel is set on landscaped grounds near the village of Dunchideock, and Exeter is only 6mi (10km) away. Accommodation is homely and comfortable. Upgrade to a deluxe room for views over the surrounding countryside, as well as upgraded amenities such as a Tassimo coffee machine and a docking station. Some rooms are pet-friendly; bring your dog, and they’ll enjoy off-lead walks in nearby Haldon Forest. 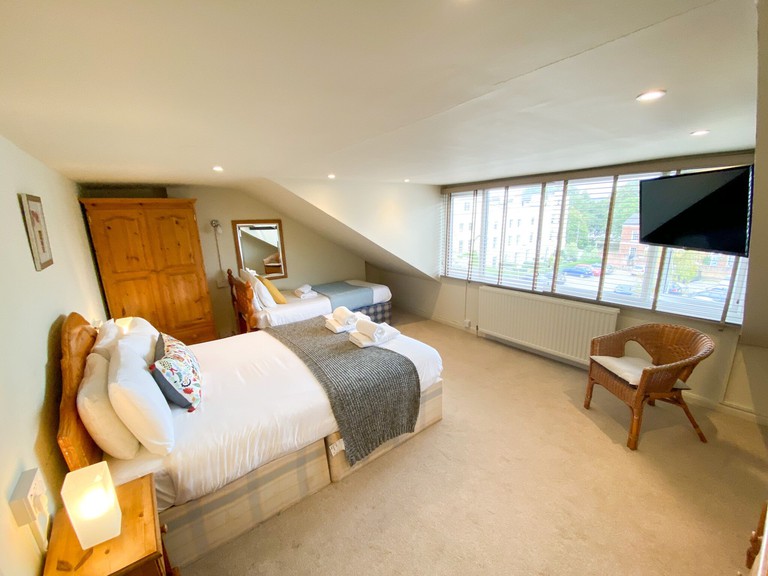 Courtesy of Bendene Townhouse / Expedia
Bendene Townhouse occupies a Georgian Grade II-listed property in the centre of Exeter. Rooms combine period details with contemporary design; the result is light, bright and airy accommodation with plenty of character. There’s no lift, but three rooms are situated on the ground floor. Some rooms have shared bathrooms, which helps keep costs low if you’re travelling on a budget. Exeter Central station is a five-minute walk away, and you can reach the university on foot in around 20 minutes. 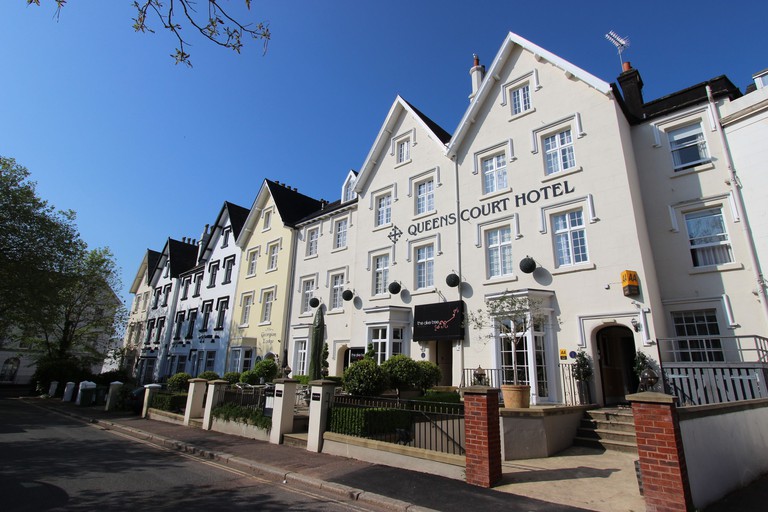 Courtesy of Queens Court Hotel / Expedia
Breakfast is a real treat here at Queen’s Court Hotel – think a full English packed with sausages, eggs and bacon. For dinner, the onsite Olive Tree restaurant specialises in British cuisine with a twist. Beyond the food, the 20 rooms with their neutral colour scheme and contemporary decor are calming and well-appointed. Exeter Cathedral and Guildhall shopping centre are a 10-minute walk from here. 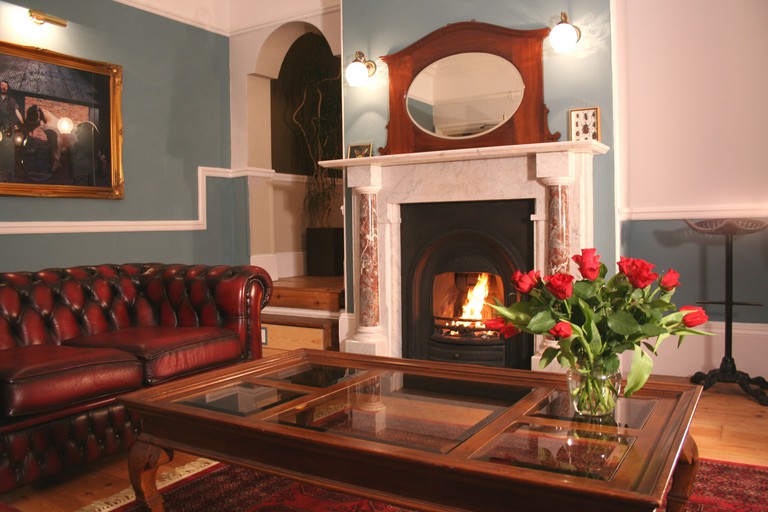 Courtesy of The Telstar Hotel / Expedia
This eco-friendly Victorian bed and breakfast hotel offers a selection of single, double and twin rooms. The owners have made a real effort to use recyclable and refillable products where possible. Book the family suite if travelling with kids – it features two inter-connected rooms, plus a small private garden. Breakfast is served in the cosy dining room, with excellent options for vegetarians and vegans. The main university campus is just a 15-minute stroll.

Looking for somewhere different to stay? Exeter is home to hotels suited to every kind of traveller; book into one of the best bed and breakfasts in the city with Culture Trip. Inspire your itinerary with the must-visit attractions in Devon, including some of the best walks in the area. Make the most of the Devonshire fare, with a food and drink tour of the county.