The Best Hotels to Book in Stratford-upon-Avon 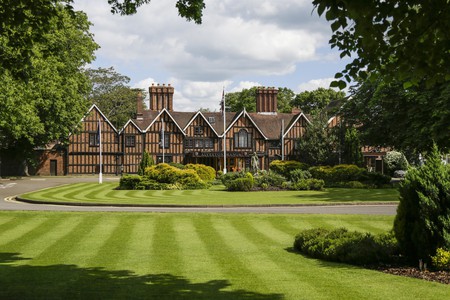 Trace the life and work of William Shakespeare in his birthplace and then start exploring the many restaurants, bars and theatres of this pretty Tudor town in England, UK.

Stratford-upon-Avon will forever be known as the birthplace – and final resting place – of arguably the most famous writer ever to put quill to paper, William Shakespeare. Charting the Bard’s journey is a must while you’re here, whether that’s visiting his childhood home and the home of Anne Hathaway (Shakespeare’s wife) or seeing modern interpretations of his plays at the Royal Shakespeare Company’s three theatres. But it’s not all about Will in Stratford, as it’s known locally. For contemporary culture, try the kooky MAD (Mechanical Art and Design) Museum and the even kookier Magic Alley, a shop and “magic emporium” with an interactive treasure trail that Harry Potter fans will love. For those wanting to venture out of town, Warwick Castle and the impossibly beautiful Cotswolds are within easy reach. Below, we’ve selected the best places to stay in Stratford-upon-Avon. 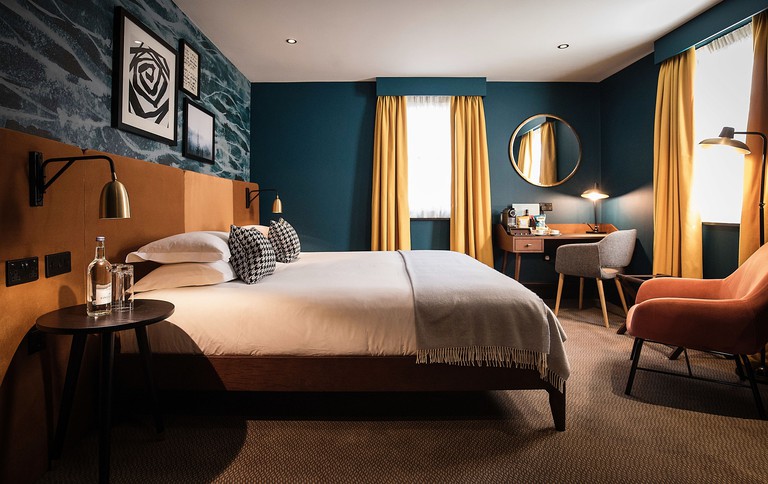 Courtesy of Hotel du Vin Stratford-Upon-Avon / Expedia
Get a taste of the town’s history as soon as you step into your hotel, by staying at this handsome venue that dates back to 1798. The courtyard is a big draw here for anyone wanting to dine al fresco or perhaps just enjoy a glass of something from the hotel’s vast and carefully selected wine list. Some stylishly decorated rooms even have roll-top baths, and the on-site bistro serves everything from breakfast to French classics to Sunday lunch, plus cocktails (all the Champagne Cocktails feature Hotel du Vin’s own champagne). As you’re in the heart of Stratford, you only need to step out of the front door to start sightseeing. 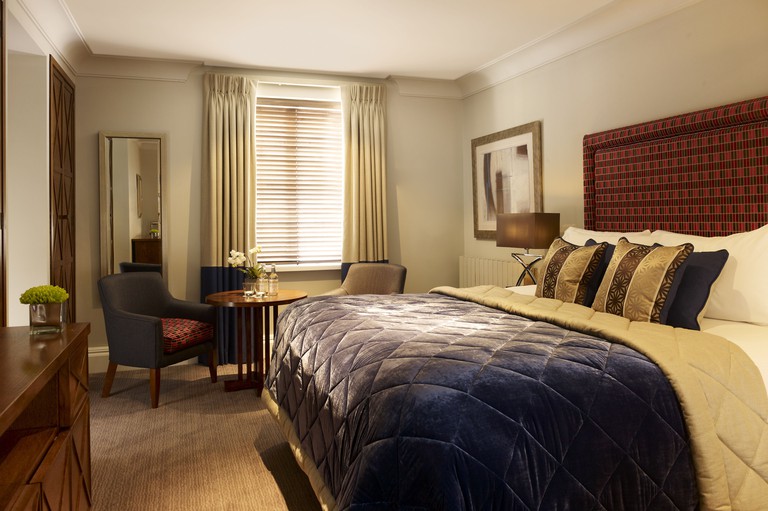 Courtesy of the Arden Hotel / Expedia
Get to the heart of The Bard’s Stratford-upon-Avon at The Arden, which sits opposite the Royal Shakespeare Theatre and Swan Theatre, both operated by the Royal Shakespeare Company (RSC). Once you’re theatred-out, retire to The Arden’s luxurious confines and one of the homely rooms, all featuring fluffy bathrobes to boost the relaxation vibes. There’s a plush restaurant in No. 44 Bistro and more casual dishes are served on the outdoor terrace, paired with views of the theatres and the River Avon. 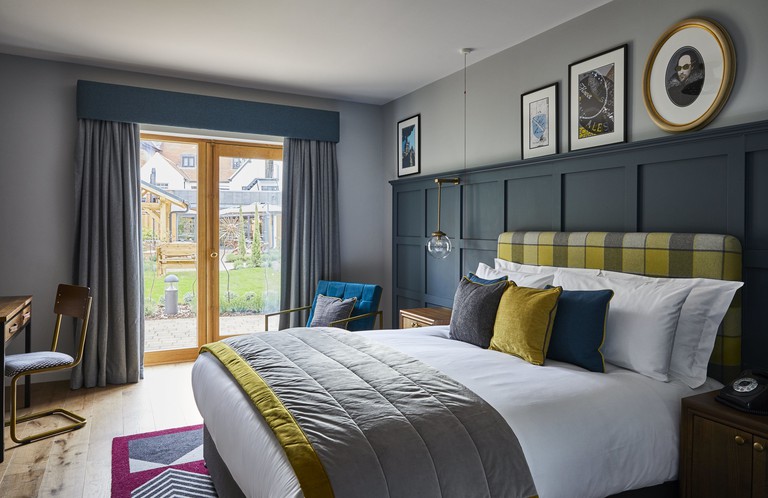 Courtesy of Hotel Indigo Stratford Upon Avon / Expedia
Glance into Shakespeare’s final years at this boutique place to stay in Stratford-Upon-Avon, whose Tudor half-timbered exterior sits opposite Shakespeare’s New Place – his family home for 19 years until his death in 1616. Parts of the hotel date back to the 15th century, and bedrooms pay tribute to the different historical eras of various wings of the building, including original Tudor wooden beams in the oldest rooms. The classy on-site restaurant, The Woodsman, utilises seasonal, local ingredients, complemented by a painstakingly chosen wine list and local craft beers. 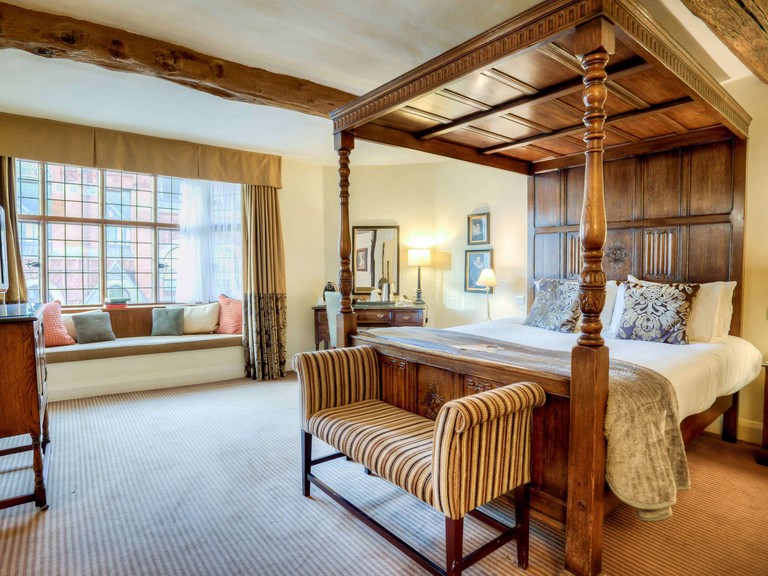 Courtesy of Mercure Stratford-upon-Avon Shakespeare Hotel / Expedia
The first thing that strikes you about the Mercure is the beautiful, 14th-century building framed with timber. The historical theme continues inside with a ridiculously cosy snug-like room, complete with roaring log fire, original beams and plump, deep-red sofas to melt into. Then it’s off to explore Shakespeare’s legacy, which conveniently begins on your doorstep thanks to the hotel’s positioning by Shakespeare’s New Place home, plus his birthplace and two RSC theatres if you want to see the Bard’s work in action. You also have restaurants, bars, cafes and independent shops galore just steps away, plus a weekend farmers’ market for local artisan treats. 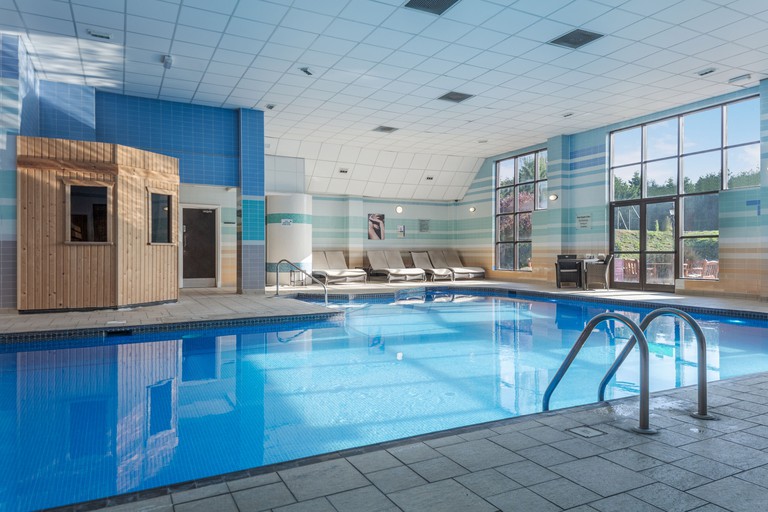 Courtesy of Stratford Manor / Expedia
If you’re keen to see some of the sights around Stratford-upon-Avon as well as the town itself, this elegant pick has you covered. A five-minute drive south takes you into the town centre, but head north instead and you’ll reach a medieval marvel – Warwick Castle – in minutes, or the Regency architecture of Leamington Spa in 15 minutes. The hotel is set in 8.9ha (22 acres) of grounds, and there are more than enough facilities on site if you don’t want to travel out: indulgent spa treatments, a sauna and steam room, a swimming pool and a restaurant serving classic British and European dishes, plus an afternoon tea menu (including a vegan option) for all your scone, cake and sandwich needs – and the added option of a refreshing G&T with rose lemonade. 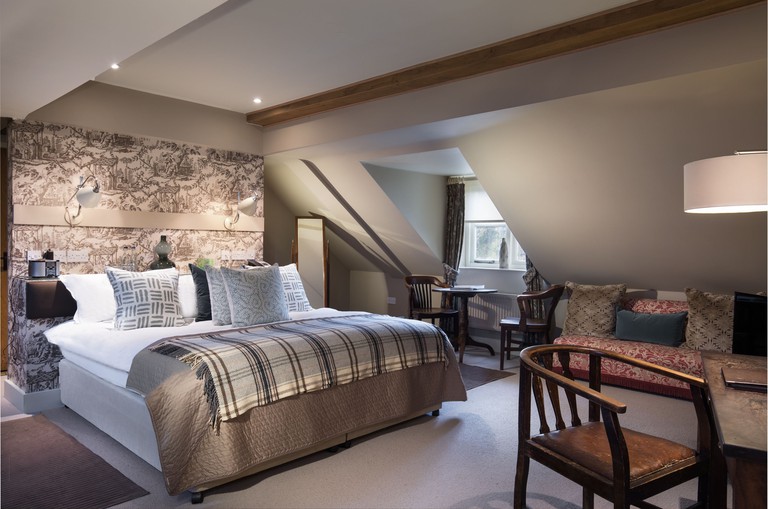 Courtesy of the Howard Arms / Expedia
Enjoy a little slice of the Cotswolds (the largest designated Area of Outstanding Natural Beauty in England, Wales and Northern Ireland) at this irresistible bed and breakfast in a 400-year-old pub. Stratford-upon-Avon is a 15-minute drive away, but you also have the charms of the local village, Ilmington, plus country walks showcasing the gloriously green and rolling Cotswold hills, as well as other nearby attractions like the quintessentially British Hidcote Manor Garden. When it’s time to head home, there’s posh pub grub and real ales in the restaurant, a log fire to warm your feet by and inviting, rustic rooms at the end of it all. 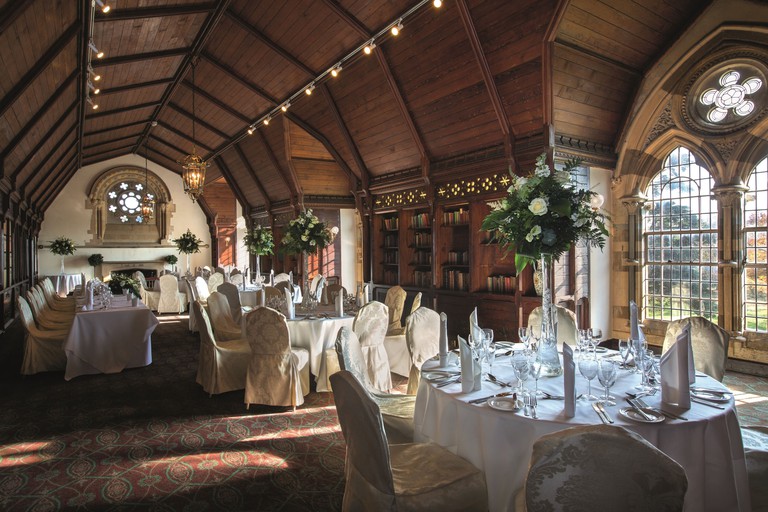 Courtesy of Ettington Park Hotel / Expedia
There are show-stopping hotels and then there’s Ettington Park, a neo-Gothic mansion in the Stour Valley, set within 16ha (40 acres) of grounds with the River Stour lapping through. Things are just as impressive inside, particularly in the grandiose Oak Room Restaurant – all oak panelling and ceilings that look like they were designed for royalty. The menu offers cheffy takes on British classics, with plenty of vegetarian and vegan options, even on the Sunday lunch menu. All of the 48 bedrooms are brochure-worthy and memorable splurging options include the Victorian Garden Suite, with a four-poster bed and views of the estate’s Norman Church and gardens. Stratford-upon-Avon is six miles away, so you’ll ideally need a car, although there are occasional buses from nearby the hotel (which also happens to be dog friendly). 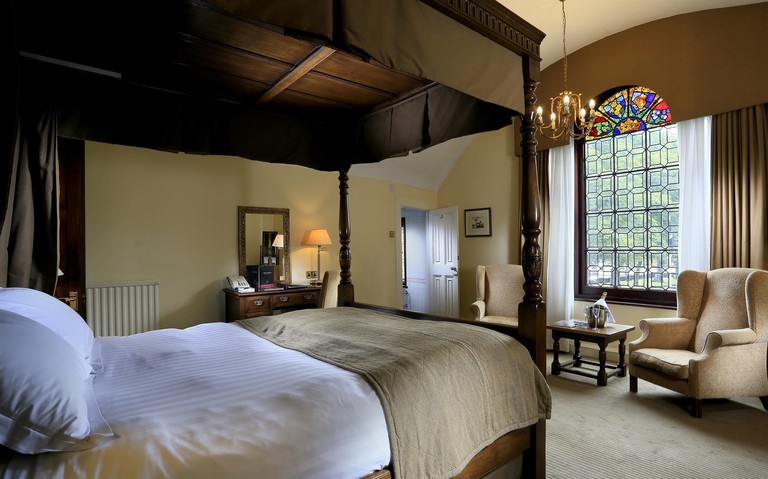 Courtesy of Macdonald Alveston Manor Hotel and Spa / Expedia
Need some serious spa indulgence? You’ll find a haven of pampering at this grand Tudor venue, where the spa takes centre stage. Choose from deep tissue massages, a dizzying range of facials (including options designed for men’s skin), hot stone massages, salt scrubs and more, plus a pool, gym and sauna. If the spa isn’t your thing, the oak beam-lined Manor Restaurant, Manor Bar (featuring a log fire and a sizeable single malt whisky selection) and Royal Shakespeare Theatre nearby (stroll over the picturesque Tramway Bridge and admire the River Avon views) will appeal to everyone. 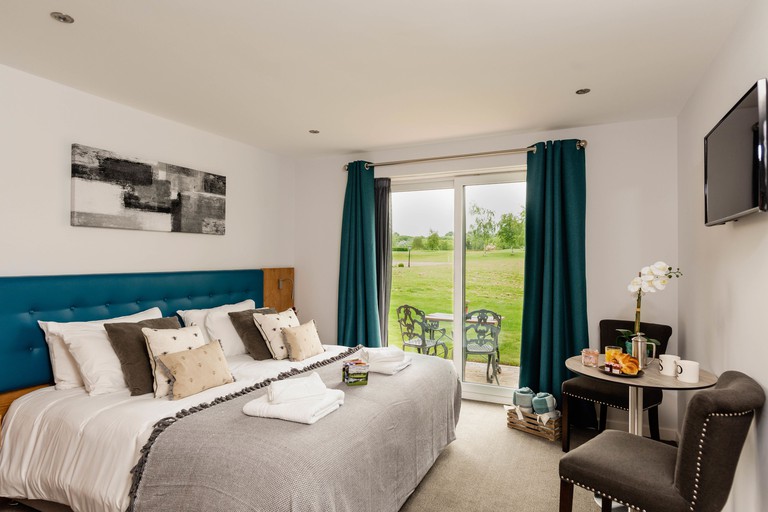 Courtesy of the Stratford Park Hotel and Golf Club / Expedia
As the name suggests, this 14th-century farmhouse hotel is a great choice for anyone who enjoys a good round. The 18-hole, par 72 course – set in the hotel’s 52ha (130 acres) of lush countryside – will keep golfers of all abilities busy. When you’re ready to swap putting for sightseeing, Warwick Castle is a 15-minute drive and Stratford-upon-Avon town centre is 10 minutes away. If you want even more golfing action during your downtime, some rooms come with views of the course and there are family rooms for those travelling with children. 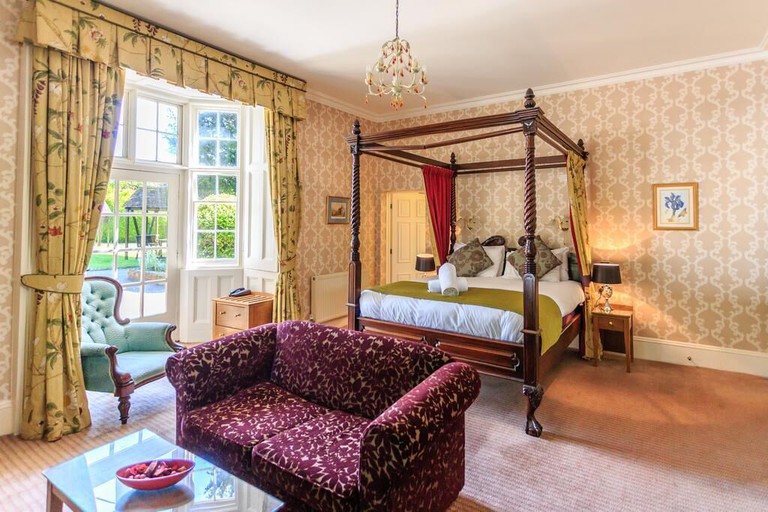 Courtesy of the Charlecote Pheasant Hotel / Expedia
Just a few minutes’ drive from Stratford-upon-Avon in the pretty village of Charlecote, this renovated farmhouse has its own landscaped gardens to lose yourself in and the 16th-century mansion Charlecote Park (and its deer park) on the doorstep. Rooms range from compact singles to plush suites with four-poster beds and double baths. There’s both a bar and restaurant on site, and a nice touch is the range of afternoon tea options, from scones and tea to a luxury upgrade with champagne and even a children’s option with simple, kid-friendly treats. Other pubs and restaurants can be found in nearby Wellesbourne (five minutes by car) and, of course, in Stratford-upon-Avon after you’ve ticked-off the obligatory Shakespeare sights.

Stratford-upon-Avon is but a stone’s throw away from the Cotswolds, but why not just cut out the middle man and stay in the heart of the countryside instead? Treat your body to some pampering by opting for one of the best hotels with a jacuzzi, or opt for an all-out wellness stay at a spa retreat in the Cotswolds. Then check out our guide to getting the best out of the Cotswolds.