The Best Hotels in Devon for Every Traveller 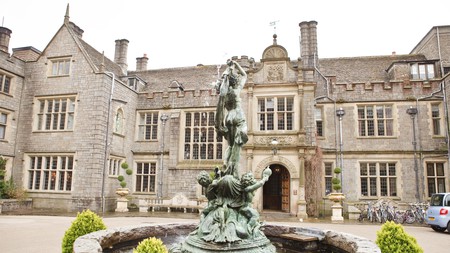 Bovey Castle is the perfect destination for those in search of vintage magic. | © Claire Evans / Alamy Stock Photo

Sandy shores, quirky medieval villages and remnants of the Jurassic Coast – welcome to the Brythonic Kingdom of Dumnonia, or Devon as it’s now known. With a contrasting landscape that spans two moors – both are Dark Sky Parks – cute coastal towns and cobbled city centres, it stands to reason that there’s a piece of Devon to suit all styles and a host of hotels to match. 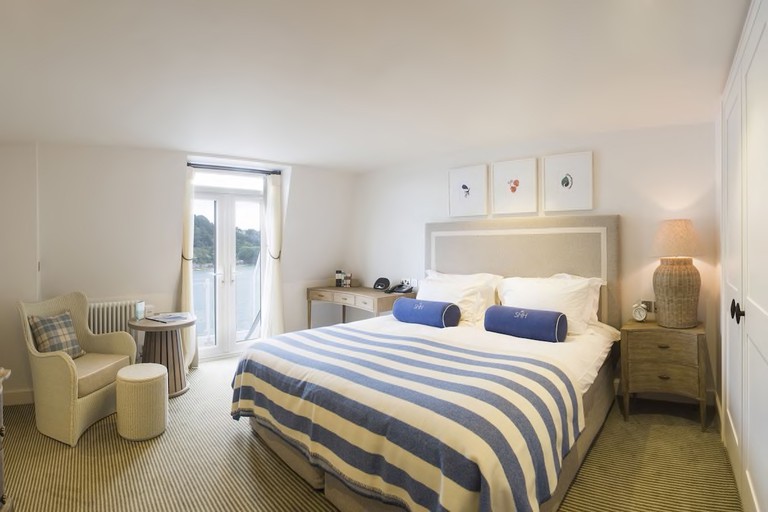 Courtesy of Salcombe Harbour Hotel and Spa / Expedia
View Rooms
Laidback New Englander luxury and nautical touches come together at Harbour Hotel’s Salcombe outpost. Specialising in rooms with a view – be that national parks or seafronts – the award-winning hotel group create havens you won’t want to leave. At Salcombe, this means an elegantly decorated spa and gym, and its aptly named The Jetty seafood bar and grill overlooking Salcombe Estuary.
More info 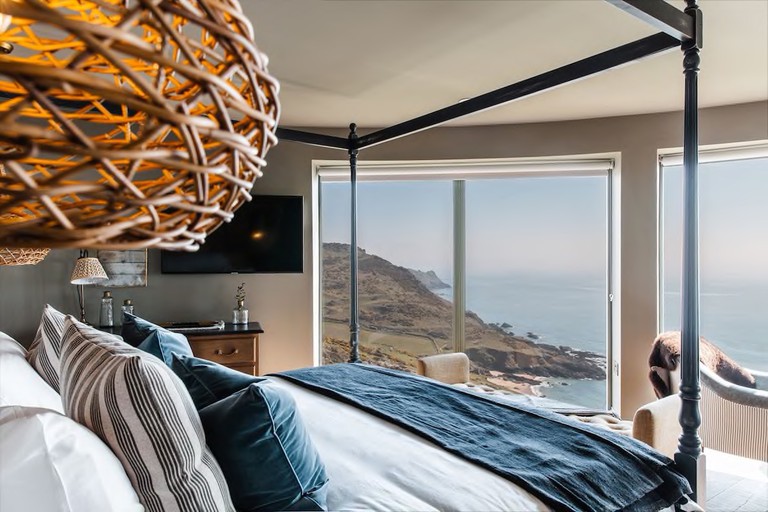 Courtesy of Gara Rock / Expedia
View Rooms
Rooms at Gara Rock feel more like kipping at your very stylish friend’s house rather than at a cliffside hotel; their sole rule, after all, is “to make yourself at home”. Seagrass baskets are stuffed with embroidered blankets – grab one en-route to the glass-fronted balcony or curl up in one of the velvet-clad chairs, like those you’ll find at its in-house cinema.
More info 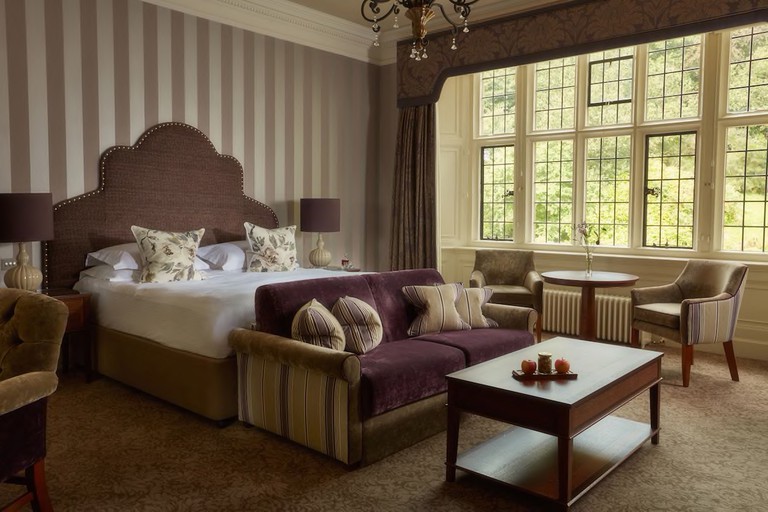 Courtesy of Bovey Castle / Expedia
View Rooms
Great Western Railways evokes nostalgia with quaint Enid Blyton-style ‘Five go on a Great Western Adventure’ posters and Bovey Castle, which began life as a GWR hotel and golf resort in the 1930s, deals in the same kind of vintage magic. Country lodges and hotel rooms are scattered around the sprawling deer-strewn countryside, and come furnished with whiskey-filled decanters, ESPA toiletries and access to the hotel’s pool, sauna and steam room.
More info 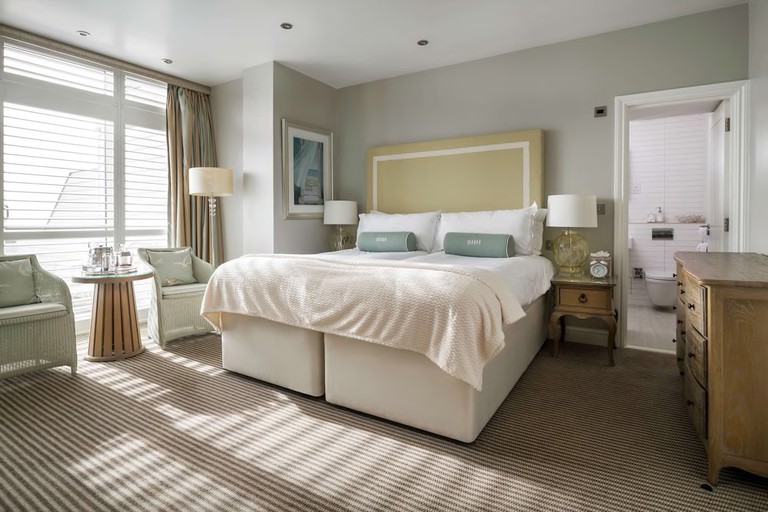 Courtesy of Sidmouth Harbour Hotel / Expedia
View Rooms
Like most hotels in the luxury group’s portfolio, Sidmouth Harbour has an ESPA-affiliated spa with a range of holistic and hydrotherapy treatments – though for an organic approach to water therapy, walk three minutes to Pebble Beach. Stick with the nautical theme and swing by the Upper Deck restaurant, which is headed by celebrated chef John Pollard. Harbour pinched him from Soho House where he developed Pizza East, Chicken Shop and Dirty Burger.
More info 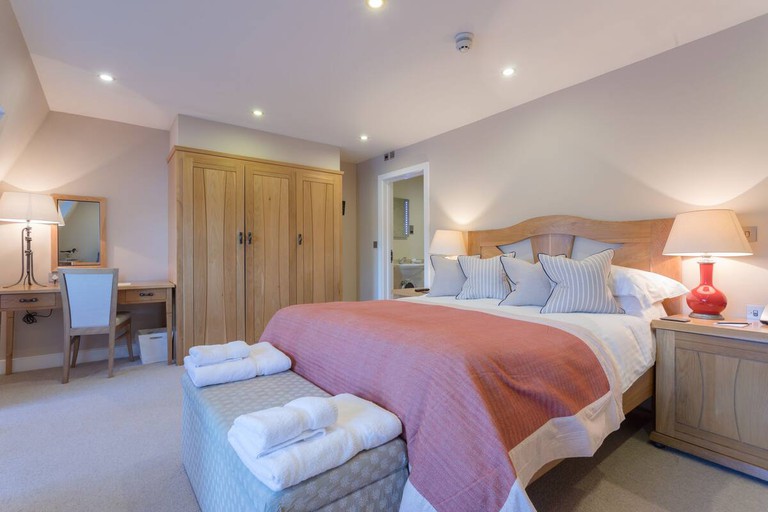 Courtesy of South Sands Hotel / Expedia
View Rooms
The devil is in the details at this nautical abode which leans heavily on Salcombe’s sailing credentials – think cabin-style decking and pinstriped furnishings. Spring for a room with a sea view, which you will have with any room in the hotel’s Dragon category (named after a 1927 style of sailing boat), along with a Juliet balcony that is best enjoyed at sunset after a soak in the free-standing clawfoot tub.
More info 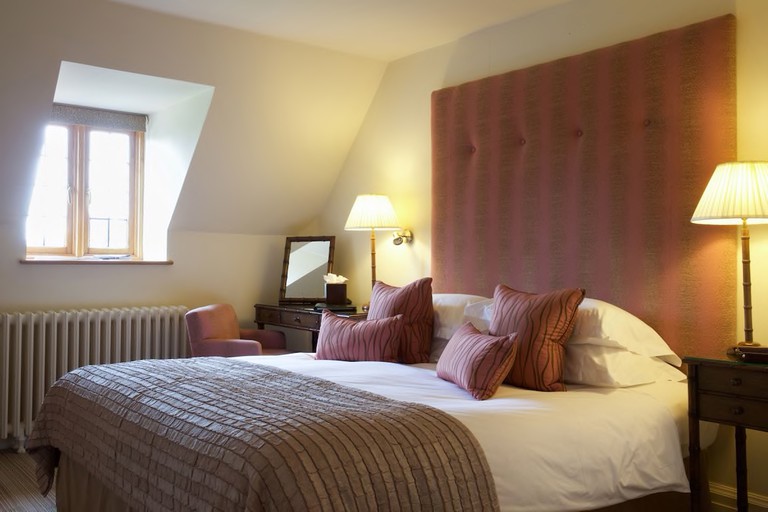 Courtesy of Gidleigh Park / Expedia
View Rooms
Hark back to an era of cocktail hours, parlour games and silver service at Dartmoor’s Gidleigh Park. This Tudor-style country manor appears as if plucked from an Agatha Christie novel – the sumptuous wood-panelled lounge makes the perfect setting for a murder-mystery party, while Miss Scarlet would be right at home in the bar with its burgundy walls and red velvet sofa.
More info 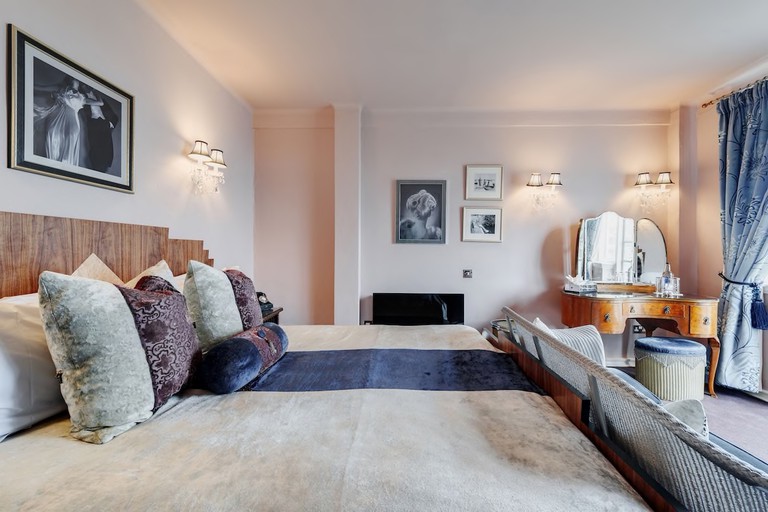 Courtesy of Burgh Island Hotel / Expedia
View Rooms
Grade 2-listed Burgh Island Hotel is an Art Deco extravagance that riffs off its history as the haunt of jazz-era icons like Noel Coward. Dusky rose and duck egg oyster chairs scatter the herringbone floor of the Palm Court Bar, where you can sip a French Manhattan in true silver-screen style. Expect a healthy dose of drama, as befits a hotel whose Beach House was built for Agatha Christie, with black tie dining in the Grand Ballroom and billiards in the Snooker Room. Hire a rowboat and lap around the lagoon, or The Mermaid Pool as it’s known – you can just imagine Esther Williams emerging from the water.
More info 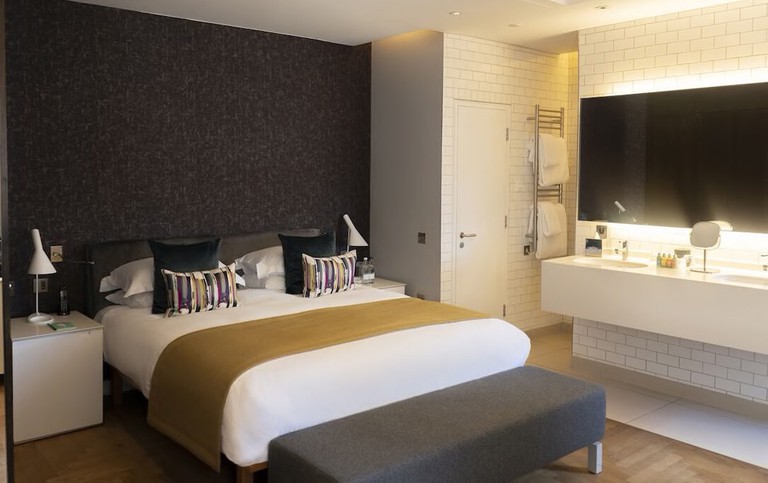 Courtesy of Hotel du Vin Exeter Hotel / Expedia
View Rooms
Bright, airy and cleverly decorated – space-starved urbanites might take heed of the partitioning wall separating the bath from the bed – Hotel du Vin’s Exeter outpost focuses on convenience. The room aside, this manifests in a central location 10 minutes from the Gothic splendour of Exeter Cathedral and the historic Guildhall Shopping Centre.
More info 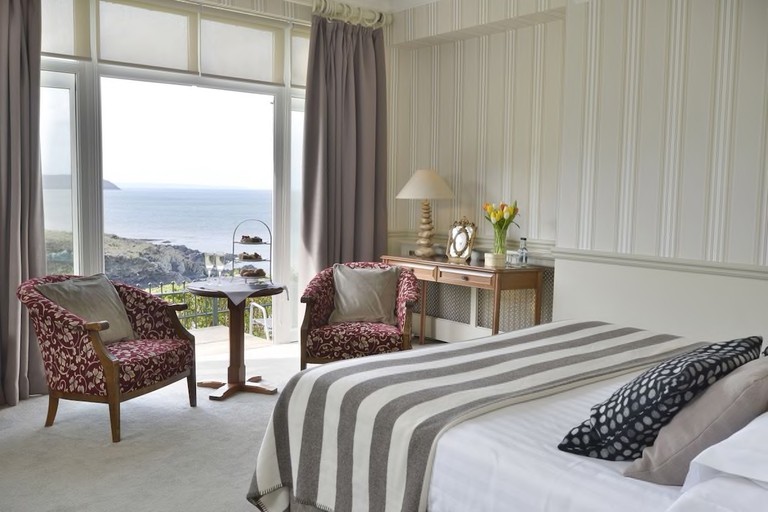 Courtesy of Watersmeet Hotel / Expedia
View Rooms
Every summer, crowds throng the three miles of golden sand from Woolacombe to Putsborough, while just along the coast sit the relatively empty Grunta and Combesgate beaches. Cut into the cliffside, The Watersmeet is a prime spot for scoping out quieter coves. You can be on the beach in minutes – but with a bistro overlooking the shore and a menu teeming with seaside specialities, you might not want to.
More info 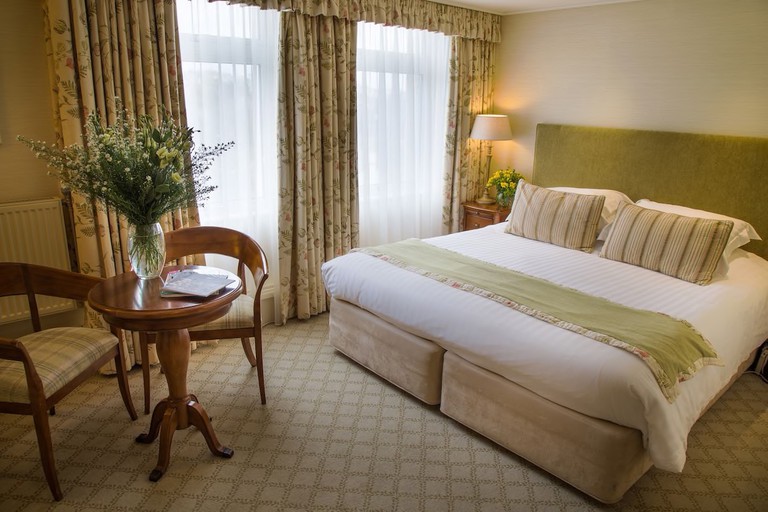 Courtesy of Thurlestone Hotel / Expedia
View Rooms
Thurlestone Hotel has been helmed by the Grose family for 120 years, so it’s safe to assume they know what they’re doing. Roaring log fires in the winter, sunny terraces in the summer and a spa and three eateries for everything in between. With a single mission to ensure guests keep coming back, the team are on hand to point you in the direction of all Devon has to offer – be that wind surfing along South Hams or petting piglets at Pennywell Farm.
More info 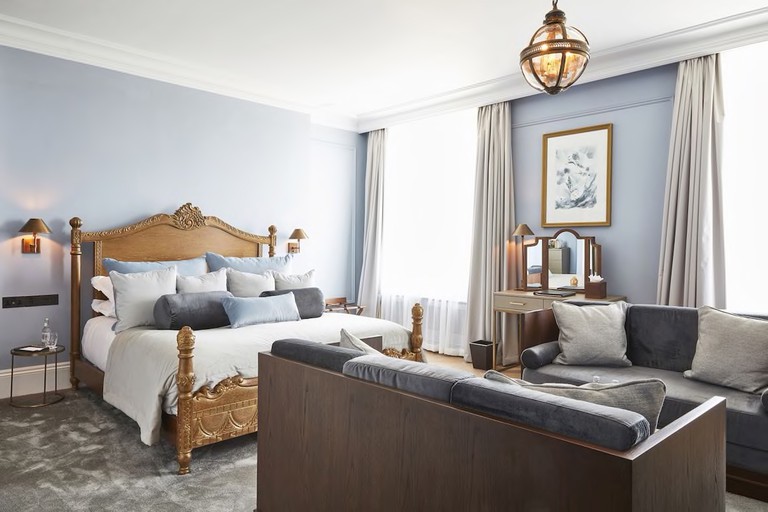 Courtesy of Lympstone Manor Hotel / Expedia
View Rooms
Lympstone Manor is a must-visit for any self-respecting foodie. Yes, the vineyard, views of the Jurassic Coast and Exe Estuary are impressive, but it’s Michael Caines who is the real jewel in this five-star Georgian Manor’s crown. Inspired by the fields and sea that surrounds the sprawling estate, the two Michelin star-holding chef brings to life his vision of contemporary British cuisine at this flagship restaurant.
More info 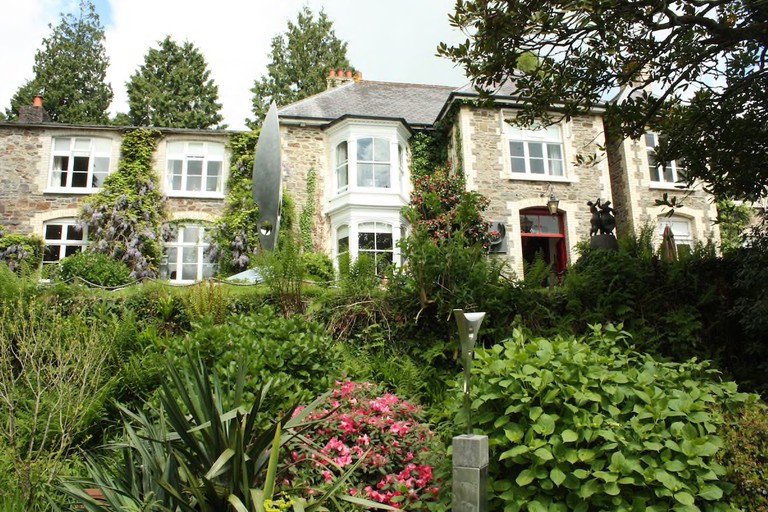 Courtesy of Broomhill Art Hotel / Expedia
View Rooms
A giant lipstick-red stiletto can be glimpsed from the road running from Ilfracombe to Barnstaple; hang a right just past this huge shoe and a winding tree-lined road leads to Broomhill Art Hotel. Tucked between towering pines sit obscure sculptures; contrary to this, rooms are discreetly decorated. Supper clubs at the Terra Madre tapas restaurant are a hot ticket amongst the local arts and crafts community who head to Broomhill to hear the visiting jazz musicians.
More info
Give us feedback