The Best Hotels and B&Bs Near Winchester Cathedral 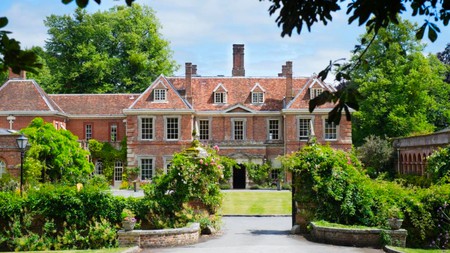 Once the capital of England, the ancient cathedral city of Winchester still maintains a lot of its cobbled charm – its narrow streets dotted with Elizabethan and Regency buildings that house tea rooms, pubs and hotels. And with national parks such as the South Downs National Park surrounding the city, there’s plenty of space to stretch and breathe. From B&Bs almost on the cathedral’s doorstep to nearby countryside retreats, here’s our round-up of the best hotels in Winchester near the historic city’s main attraction – its historical cathedral. 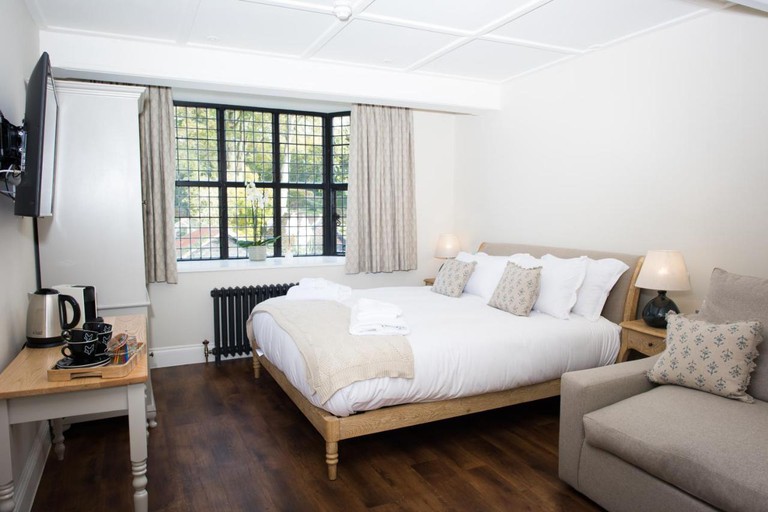 Courtesy of the Fox Winchester / Booking.com

There aren’t too many boutique hotels in Winchester that can tell you exactly where your burger, your microbrew and your buffalo mozzarella came from, but the Fox can. This hotel, bar and restaurant embraces the bounty of its neighbours by sourcing as much grub as possible from around Winchester. The result is a hyper-local experience. Well, at least in the restaurant. The guest rooms have worldly Egyptian cotton sheets and Nespresso machines.

The Old Vine, for four-poster beds 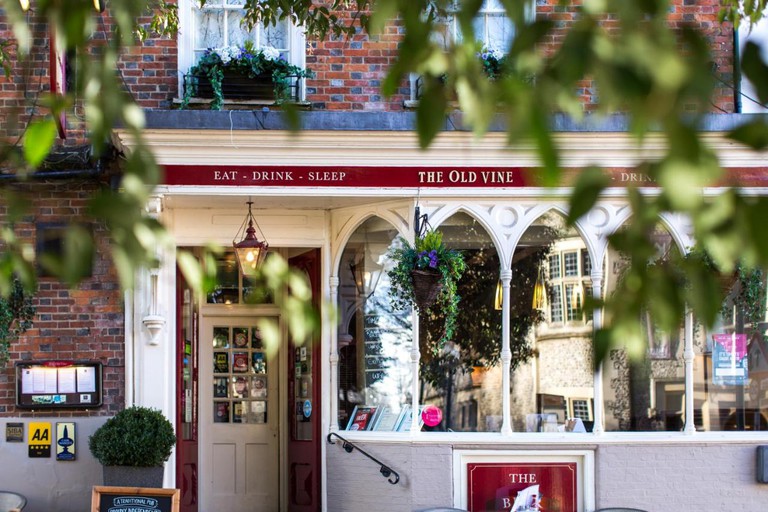 Courtesy of the Old Vine / Booking.com
With an excellent central location, this 18th-century inn is a one-minute walk from the cathedral – some of the rooms have a view over the cathedral and its grounds – and right by the main cobbled streets for access to Winchester’s restaurants and bars. Much like the rest of the city, it’s pretty twee and cosy, with plenty of mahogany, large windows, pub classics and vines running up its exterior.

Lainston House, for being lord of the manor 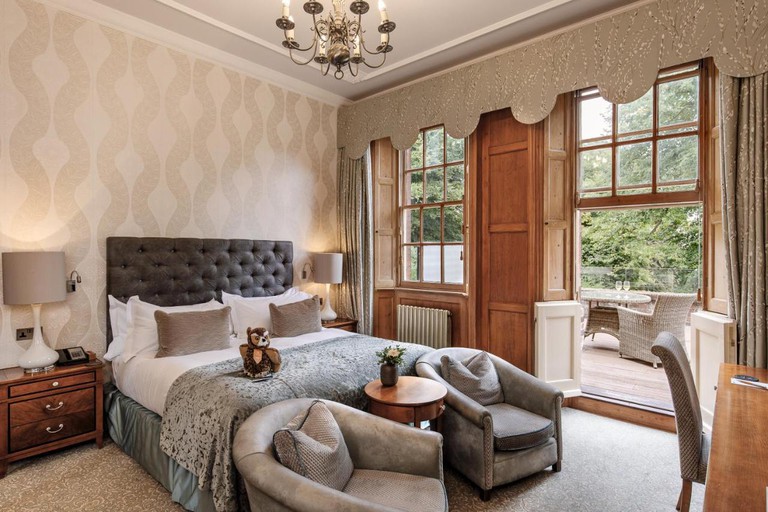 Courtesy of Lainston House / Booking.com
Lainston House is a little further away in the nearby village of Sparsholt – a 13-minute drive from Winchester – but easily reachable by public transport. It’s a place to stay for a countryside retreat, while being close enough to the historic centre to explore. It’s dog-friendly – some rooms have direct outdoor access – and has extensive grounds veined with walking trails. Dog in tow or not, there’s a cookery school to enjoy with a kitchen garden and pizza oven. 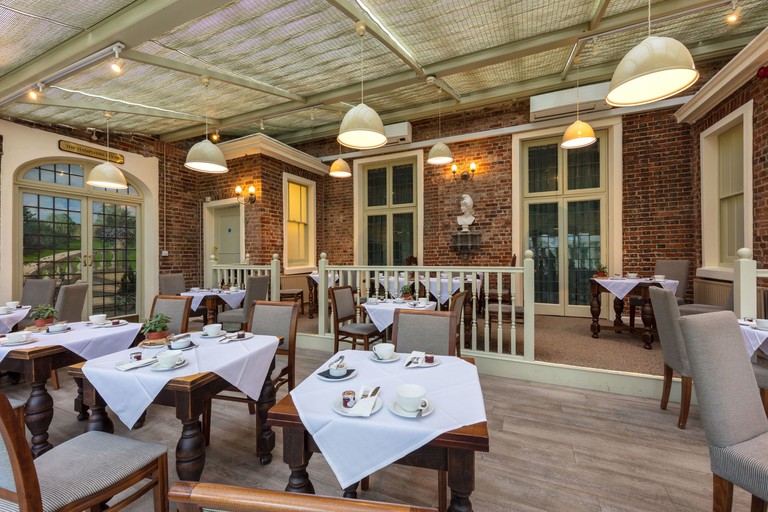 Courtesy of Winchester Royal Hotel / Expedia
Despite being in the centre of the city, Winchester Royal Hotel still packs in some of the perks from accommodation on the outskirts. It offers on-site parking and has its own walled garden for outdoor dining. The restaurant uses fresh local ingredients as much as possible, serving up afternoon tea, drinks, Sunday lunches and a full menu in their award-winning restaurant.

The Running Horse, for village vibes 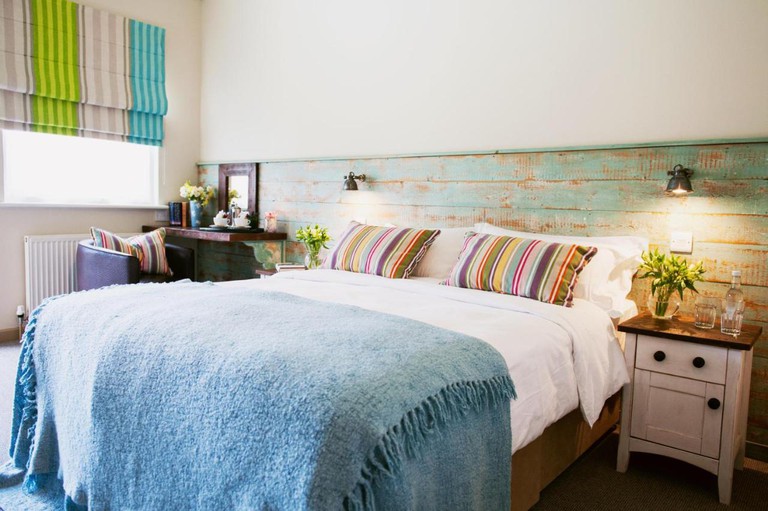 Courtesy of the Running Horse / Booking.com
The Running Horse in the village of Littleton is 3mi (5km) from Winchester Cathedral, and 25mi (40km) from the New Forest National Park – making it a great option for pairing a city break with wild walks. The property has a country-rustic feel, being a restored village inn with cosy fireplaces, hearty pub food and outdoor space with peaceful, green surroundings. 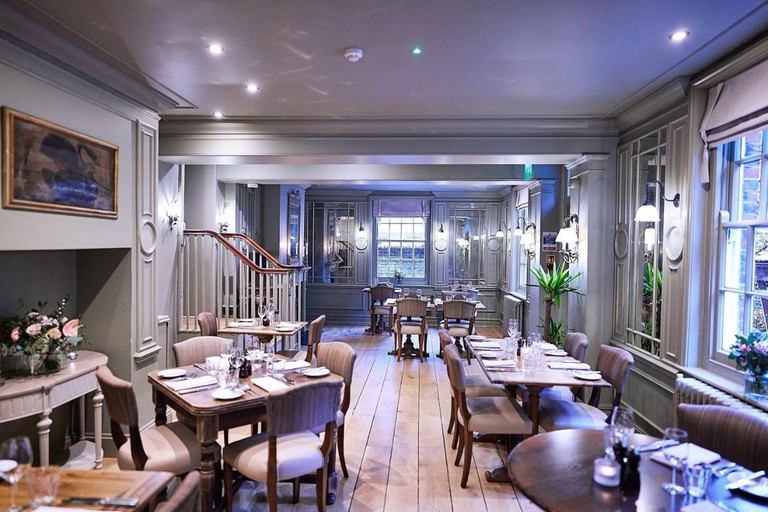 Courtesy of Hotel du Vin and Bistro Winchester / Booking.com
The original of the Hotel du Vin chain, this one is a five-minute walk from the cathedral grounds – while also being close to the River Itchen on the outskirts of the South Downs. The Georgian building still offers a level of grandness — there’s a cigar shack, walled gardens, low-lit cosy corners in the bar and bistro and an extensive list of wines, offered under the guidance of an expert sommelier. 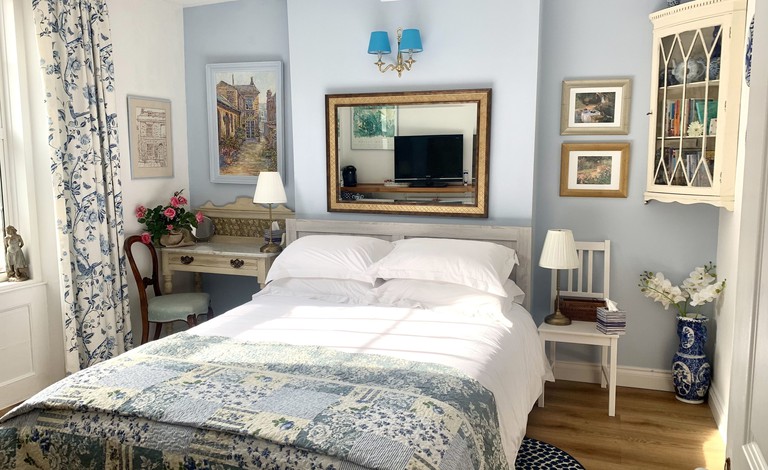 Courtesy of Esme’s Bed and Breakfast / Expedia
Run independently by Esme, this back-to-basics B&B in Winchester is in the heart of the city, and gets all the important details right – including port and biscuits in the bedrooms. A seven-minute walk south and you’ll reach the cathedral, but Winnall Moors Nature Reserve – a protected meadowland and chalk stream – is also under a 10-minute walk away. Esme’s is known for its friendly atmosphere and thoughtful little touches that make it feel more personal. 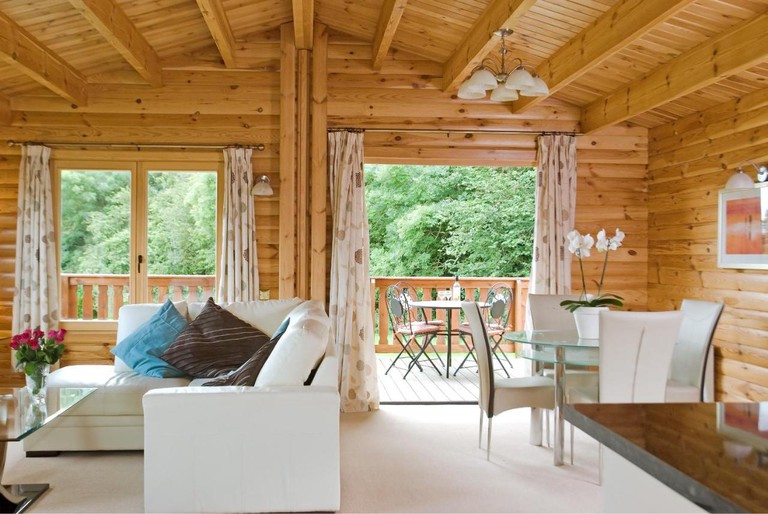 Courtesy of South Winchester Lodges / Booking.com
A self-catered option a few miles away from the city, these Scandinavian-style log cabins in Winchester come equipped with their own hot tubs that overlook the surrounding greenery of the Championship Golf Course – the lodges are directly in the centre of the grounds. Cabins have their own fireplaces and separate living rooms with balconies or patios. There are on-site spa services and barbecue grills, plus guests can use the 18-hole golf course.

Winchester is only an hour’s train ride away from London. For more well-located hotels, see the best ones near Trafalgar Square and the best near Tower Bridge. They’re all bookable through Culture Trip. Fill up any spare time in the city with the best outdoor cinemas in London and the oldest churches in London, then grab a bite using this foodie guide through the British capital.