The Best Hotels and B&Bs to Book Near Colchester Zoo, UK 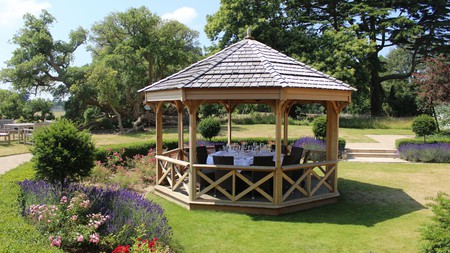 Spanning 60 acres (24ha) of parkland, Colchester Zoo is one of the best attractions in Essex. It’s also just four miles (6.4km) from the town centre, once the capital of Roman Britain. Discover these top places to stay nearby, bookable on Culture Trip.

You’ll find 200 animal species at Colchester Zoo, including Komodo dragons from Indonesia and white rhinos from the African plains. There’s even the chance to get up close to its residents – don’t miss feeding the elephants and giraffes. If you’re looking to stay nearby, there are plenty of accommodation options; the ones below are our pick of the bunch. 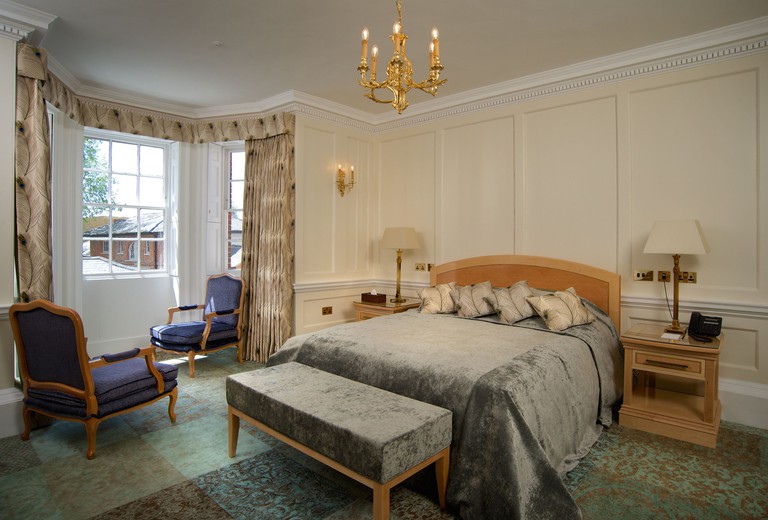 Courtesy of GreyFriars Hotel / Expedia.com
Michelin-recommended GreyFriars offers 26 elegant rooms and suites, with some in a Grade II-listed 18th century building, and others in an annex built in the early 1900s. All are kitted out with luxury carpets from Belgium and furniture handcrafted in Stockport, while many boast views of the gated grounds, Colchester Castle or the rooftops of the town’s historic Cultural Quarter. Enjoy pan-European dishes in the two award-winning restaurants, or head to the Baroque Bar for a fireside cocktail in a red leather armchair. 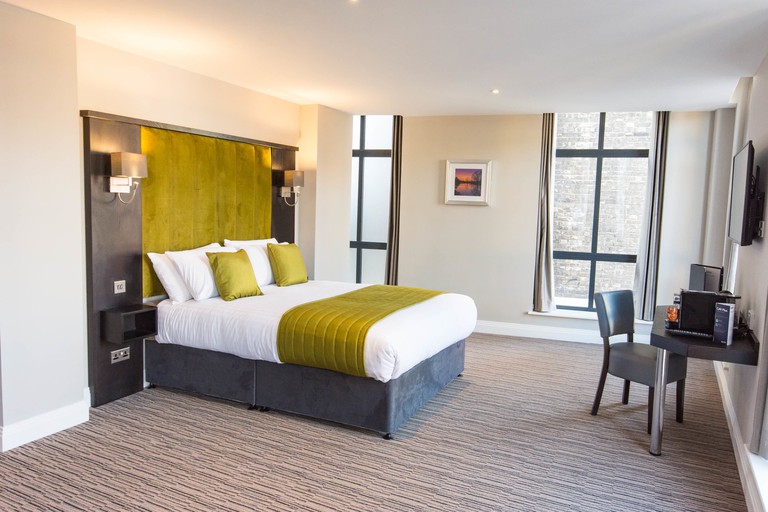 Courtesy of St Nicholas Hotel / Expedia.com
This contemporary three-star is part of the George Hotel, located directly opposite on Colchester’s High Street. Families should book the Feature Room, complete with a sofa bed for kids. Order a cooked or continental breakfast to your room before visiting the Zoo, and return in time for G & Tea – a decadent offering of cakes, sandwiches and gins served in the gardens during summer. If you’re visiting between September and April, call in at the Courtyard Brasserie to sample their legendary take on the Colchester native oyster with a glass of champagne. 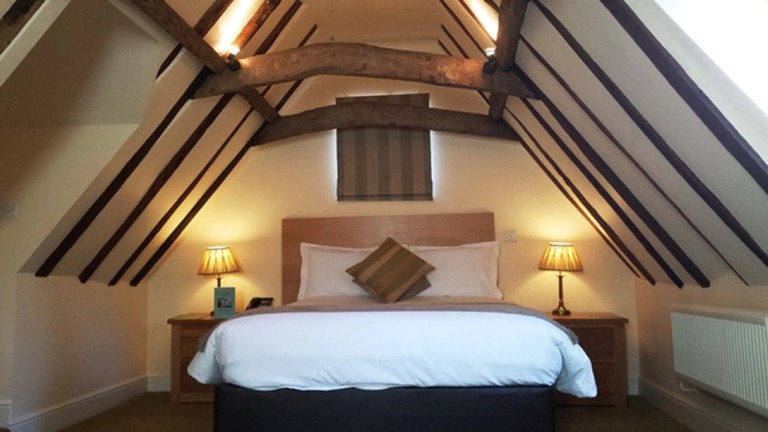 Courtesy of North Hill Hotel / Expedia.com
Rooms and communal areas in this chic B&B show off original features including exposed brick walls, wooden beams and sash windows. Traditional pub fare, real ale and a selection of international wines are served in the beer garden and restaurant; the home-made Scotch egg is a must-try. All of Colchester’s major attractions – including the Zoo, Castle and the Hollytrees Museum – are easily reachable on foot. Discounted parking is available opposite the hotel. 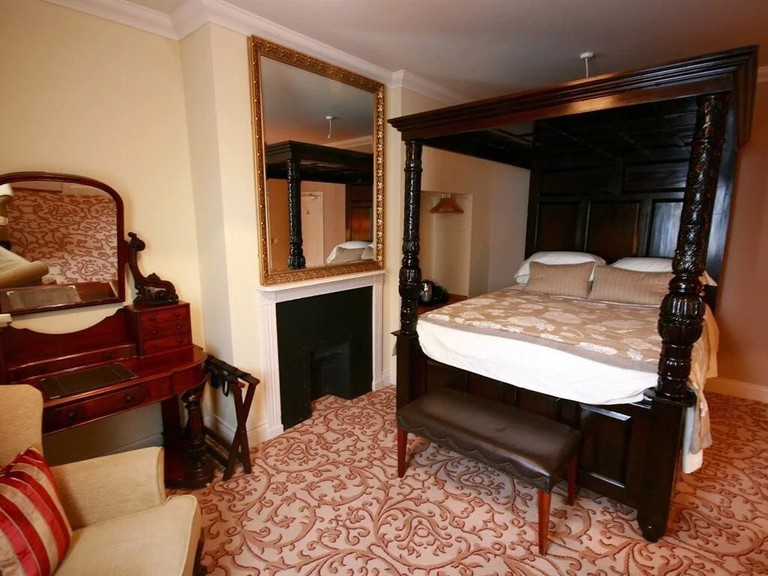 Courtesy of Colchester Boutique Hotel / Expedia.com
Book a room in this stately Georgian townhouse in Colchester and you’ll receive a complimentary breakfast plus access to the in-house tapas bar and terrace, where Spanish staples such as tortilla and croquetas are served alongside classic cocktails. Rooms have a cosy, boutique style and are available as singles, doubles and twins; the King Deluxe features a mahogany four-poster bed. Key attractions within a five-minute walk include the colourful Dutch Quarter and Castle Park. 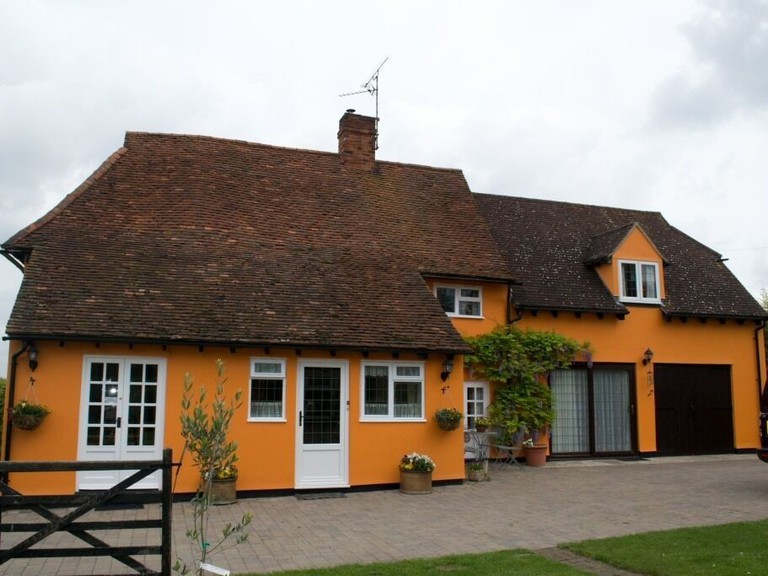 Courtesy of Woodview Bed & Breakfast / Expedia.com | Courtesy of Woodview Bed & Breakfast / Expedia.com
You’ll be greeted by the resident parrot and dogs at this 450-year-old cottage in Birch, a charming village only a 20-minute drive from Colchester. Single and double rooms feature painted black beams, floral curtains and pine furniture, and have ensuite or shared bathrooms. Breakfast options range from cereals to a full English (cooked to order). After you’ve eaten, take a stroll around the acre (2.5ha) of pretty gardens. It’s a ten-minute walk to the Hare and Hounds, a friendly village pub. 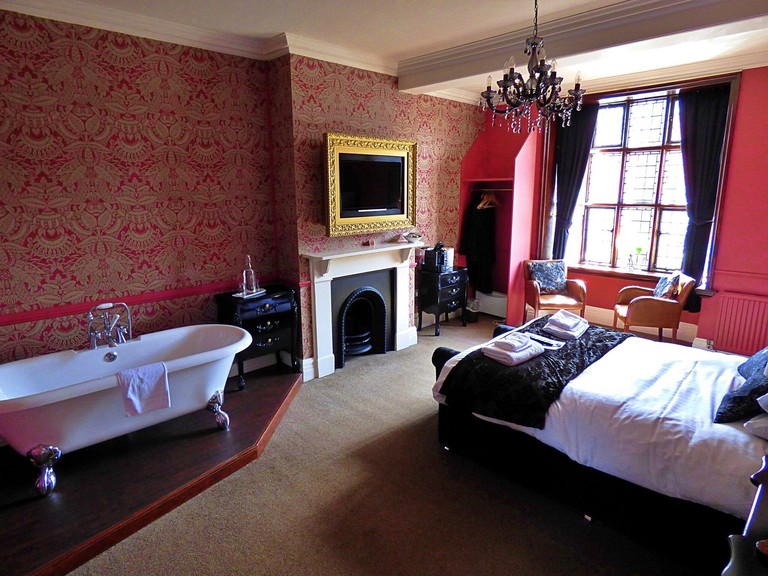 Courtesy of The Lady Elizabeth Hotel / Expedia.com
Entertainment nights at this pub-with-rooms in Sudbury feature live bands, karaoke, open-mic sessions and pop quizzes. The dog-friendly accommodation consists of doubles and two-bedroom suites, all of which feature Tudor-style windows, elaborate wallpaper and antique furnishings; some also have fireplaces and free-standing bathtubs. Downstairs in the rustic-chic bar, the all-day menu ranges from breakfast and baguettes to pub favourites such as chicken curry and bangers and mash. Colchester Zoo is a 35-minute drive away. 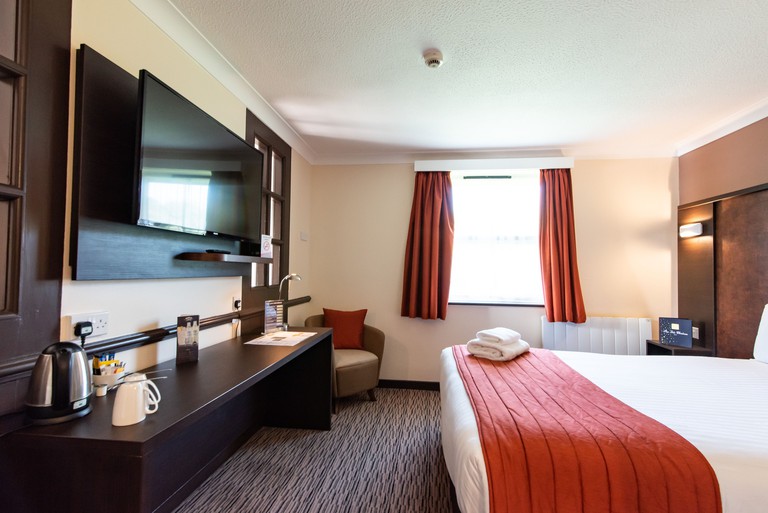 Courtesy of Dragonfly Hotel / Expedia.com
The Dragonfly is hard to beat if you’re looking for a good-value, well-catered base from which to visit the Zoo. It offers soberly decorated doubles and twin rooms, including some with fold-out beds for kids. A full English breakfast is included and can be delivered to your door or served in the ground-floor Barley & Graze restaurant, where ales, wines, premium spirits and traditional British fare are also available. 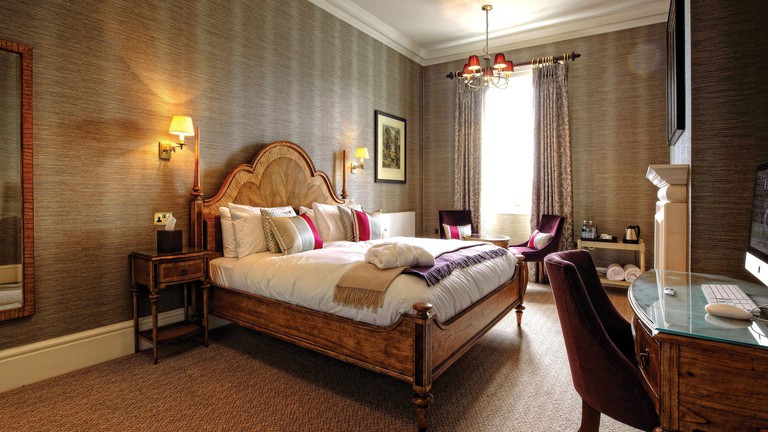 Courtesy of Wivenhoe House Hotel / Expedia.com.
The picturesque grounds surrounding this 18th-century manor are captured in an 1816 painting by local icon John Constable. Rooms are split between the Grade II-listed original building and a modern annex; most have garden views, best enjoyed through the enormous bay windows in the Luxury rooms. Sip prosecco or tuck into a champagne afternoon tea overlooking one of the park’s ancient cork oaks. Later on, sample innovative dishes at the brasserie – perhaps the braised pork belly, or the potato and quinoa cake. A 25-minute drive will take you to Colchester Zoo.

Looking for more to enjoy around Colchester? See the best things to do in Essex, or head to the beach with the best hotels in Southend-on-Sea. There’s a lot to going on in the neighbouring counties, too – discover the best hotels in Suffolk and the best boutique hotels in Kent, bookable on Culture Trip.